Accessibility links
Book Review: 'The City Game' Shines Light On One Of Basketball's Darkest Moments The '50 City College of New York Beavers were the only team to win the NIT and the NCAA tournaments. Matthew Goodman's book details how a point-shaving plot came to dominate the team's legacy. 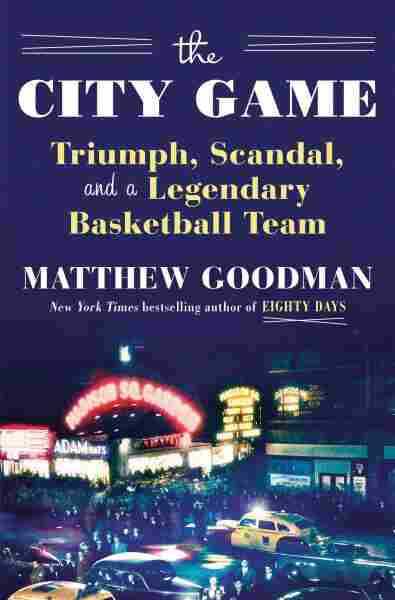 Somewhat forgotten to younger basketball aficionados, though, are the 1949-50 City College of New York Beavers, who became the first and only team to win both the National Invitation Tournament and the NCAA Tournament.

As Matthew Goodman writes in his wonderful new book, The City Game, there's a reason for that: The team's championships were overshadowed by a point-shaving scandal that engulfed not just CCNY but also several other schools across the nation in the early 1950s. Goodman's book is a fascinating look at a team full of talented young men who torpedoed their careers because they were unable to resist the lure of easy money.

The CCNY Beavers were, by all accounts, a remarkable team. They "operated something like a five-man jazz combo, with each player improvising off a few basic patterns ... together creating something fast and complex and unpredictable," Goodman writes, benefitting from the coaching of basketball legend Nat Holman and assistant coach Bobby Sand. They were also a diverse team in an era when racism and anti-Semitism ran rampant: The team was composed of 11 Jewish players and four African Americans; all of them were the children of immigrants.

While the players were unquestionably thrilled to get the chance to play for "the working-class Harvard," there was still an air of resentment on the part of the students. Many chafed against Holman, an "arrogant and aloof" man who routinely verbally abused his players, Goodman writes. And the students weren't happy that they were made to do their own laundry on road trips while their coaches opted for dry-cleaning and fancy steak dinners.

So it wasn't surprising when some of the team's players were lured into a point-shaving operation. Point-shaving involves players deliberately missing shots and blocks in order to keep the point margin below the spread; basketball, where the scores are typically high and the pace of the game is fast, is more prone to point-shaving than other sports. "An athlete whose long-honed competitive nature would recoil at the prospect of intentionally losing a game might have less resistance to creating a smaller margin of victory," Goodman notes.

For some of the players — "not all of them poor but none of them rich" — it proved irresistible. Some longed to support their families living in overcrowded tenements; others were drawn into the scheme by peer pressure: "I wanted the guys to like me," explained Irwin Dambrot, a small forward on the team.

Unfortunately for the Beavers, the point-shaving plot happened to occur at the same time as another gambling scandal, one that would eventually bring down New York Mayor William O'Dwyer. The city's district attorneys became obsessed with finding and prosecuting bookmakers, and it wasn't long before they discovered that college players were routinely shaving points. CCNY got hit particularly hard: "The entire starting five of the City College double-championship squad had now been arrested, along with the top two reserves," Goodman writes. "The shame of the team was complete."

Goodman's book is at once a history of the CCNY team's remarkable championship season (and the less remarkable one after that) as well as a close look at organized crime and police corruption in post-WWII New York. Goodman does a wonderful job recounting the Beavers' games — fans of the game will find much to love in his play-by-play descriptions of CCNY's march to the championships, but you don't need to be a hardcore basketball fan to keep up.

He also proves to be excellent at providing historical context for the scandal. College basketball was huge in post-war New York; CCNY regularly played their games at Madison Square Garden, selling out the venue routinely. The background makes the fallout from the players' arrests all the more heartbreaking: Students, Goodman writes, "would no longer flock to the Garden to watch their team play; everyone understood that this portion of their lives, and of the life of their school, had come to an end."

Goodman follows the students in the years after the scandal: "They lived with dignity but also with a lingering sense of shame and anger and frustration. Their story, they always believed, was far larger than they were." Some did end up finding deliverance: Floyd Layne, the Beavers' remarkable shooting guard, never got to play in the NBA, but did eventually become the first African American to serve as CCNY's head basketball coach. Goodman doesn't let the players off the hook, but writes about them with a real sympathy: They were essentially kids who paid a harsh price for making admittedly poor decisions, he argues.

The CCNY point-shaving scandal remains, decades after it happened, a heartbreaking story of venality, and Goodman turns out to be the perfect author to tell it. The City Game is a gripping history of one of college basketball's darkest moments, an all too human tale of young people blowing up their futures in a misguided attempt to make good.

Read an excerpt of The City Game