Accessibility links
Grief Sweeps Through Hong Kong, Where Protester's Death Portends Further Unrest A student died Friday of injuries suffered in a fall as police dispersed protesters from a parking garage. Across the region, protesters mingled grief with grievance, renewing their calls for change. 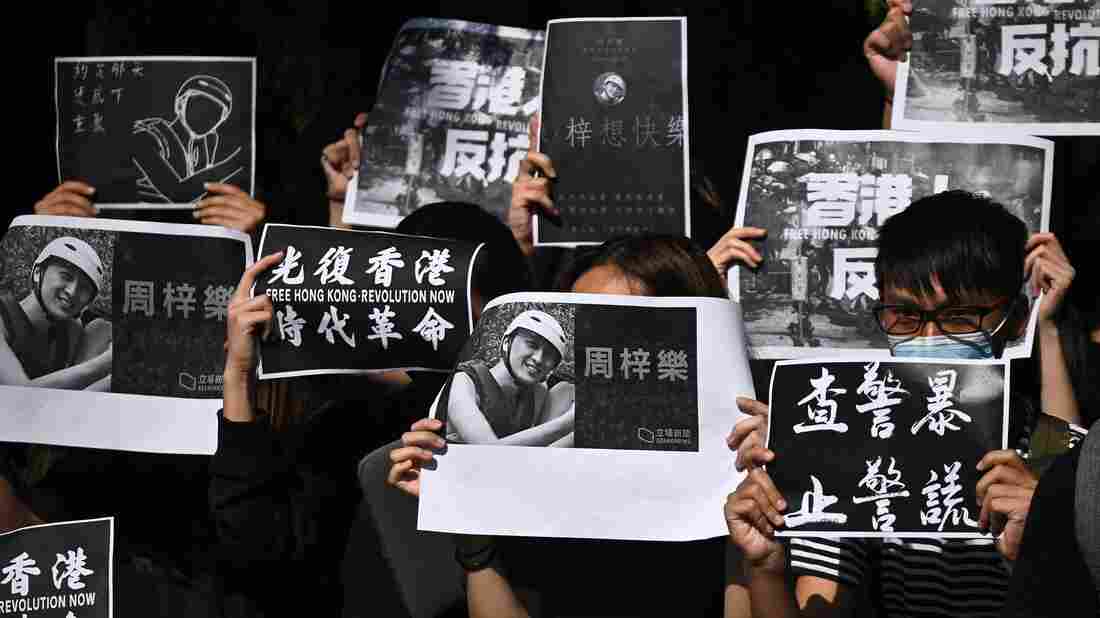 Students of the Hong Kong University of Science and Technology take part in a march toward the school president's lodge Friday, following the death of a student injured during clashes between police and protesters a few days ago. Philip Fong/AFP via Getty Images hide caption 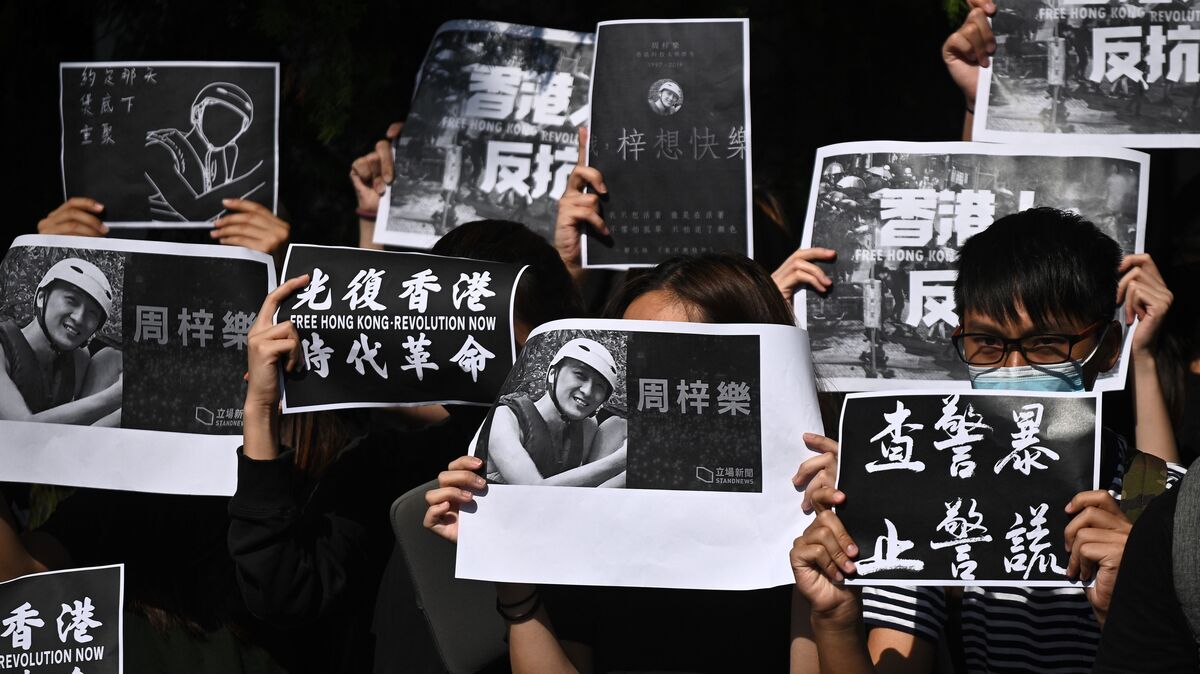 Students of the Hong Kong University of Science and Technology take part in a march toward the school president's lodge Friday, following the death of a student injured during clashes between police and protesters a few days ago.

Roughly five months since massive protests first spread through Hong Kong, unrest has flared anew after a student died of injuries sustained during a protest. Chow Tsz-lok, a 22-year-old student at the Hong Kong University of Science and Technology, died Friday of brain injuries he suffered in a fall as police dispersed protesters from a parking garage earlier this week.

Chow is believed to be the first person to die in violence directly related to the protests.

He had been hospitalized since early Monday, when he was found unconscious in a pool of blood after police teargassed protesters in the parking garage. Police say it appears he fell one story, though what caused his fall is disputed. The circumstances of Chow's death remain under investigation.

Mourners gathered across Hong Kong to remember Chow. Hundreds of people solemnly assembled at the spot where he fell. They snaked through the cavernous parking garage carrying white bouquets and laying them on what grew into an altar of flowers beneath Chow's photograph. They stooped to light small votive candles, and sang hymns in memory of the young man whose death is intensifying public fury.

Many did not even know him, but they told NPR about how their sense of him as family — as a sibling — linked him to them.

"We are shocked and grieved," said Genki Yeung, a 24-year-old surveyor who joined the mourners. When asked what Chow represented to them, Yeung found himself overcome with emotion.

"Before the movement, we assumed that Hong Kong people were selfish and cared for themselves. But in these five months, we showed that people are connected. We care for each other. [Chow] is like one of the family members in Hong Kong," Yeung said, adding: "We will keep walking this path not only for Chow but all people who share the common value."

At the university itself, which was celebrating graduation the same day, school President Wei Shyy called for a moment of silence. And that night, demonstrators also observed a candlelight vigil on campus.

Others across the semiautonomous region saw the young man's death as a grim new item on their list of grievances against Hong Kong's Beijing-backed government. First prompted by an unpopular bill that would have allowed extradition of suspects from Hong Kong to China, the widespread protests have continued to roil the region despite the bill's formal withdrawal last month. 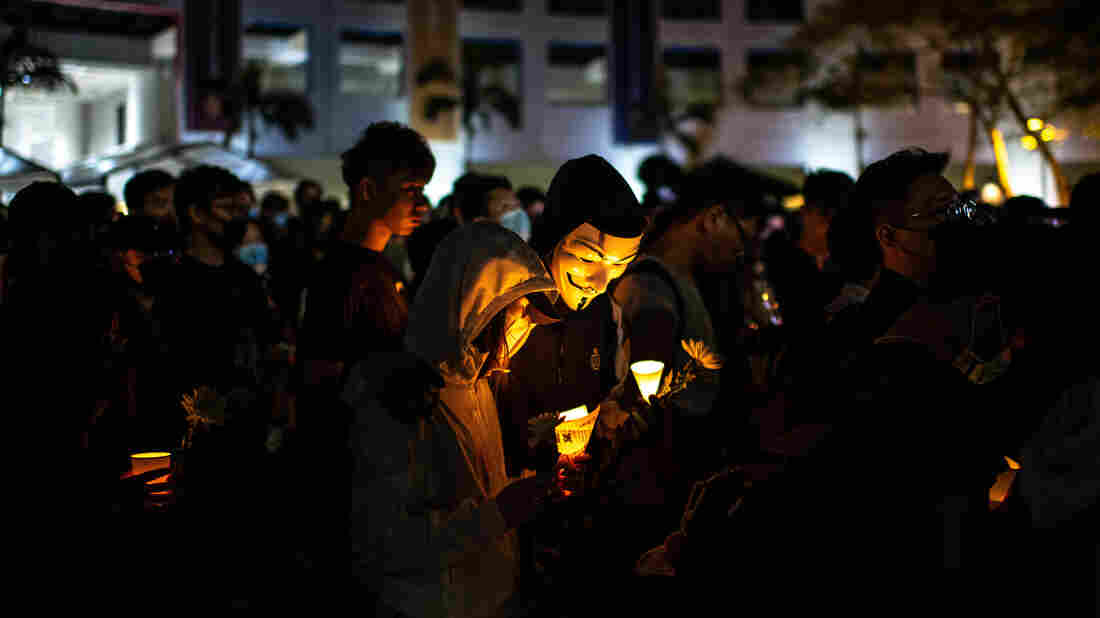 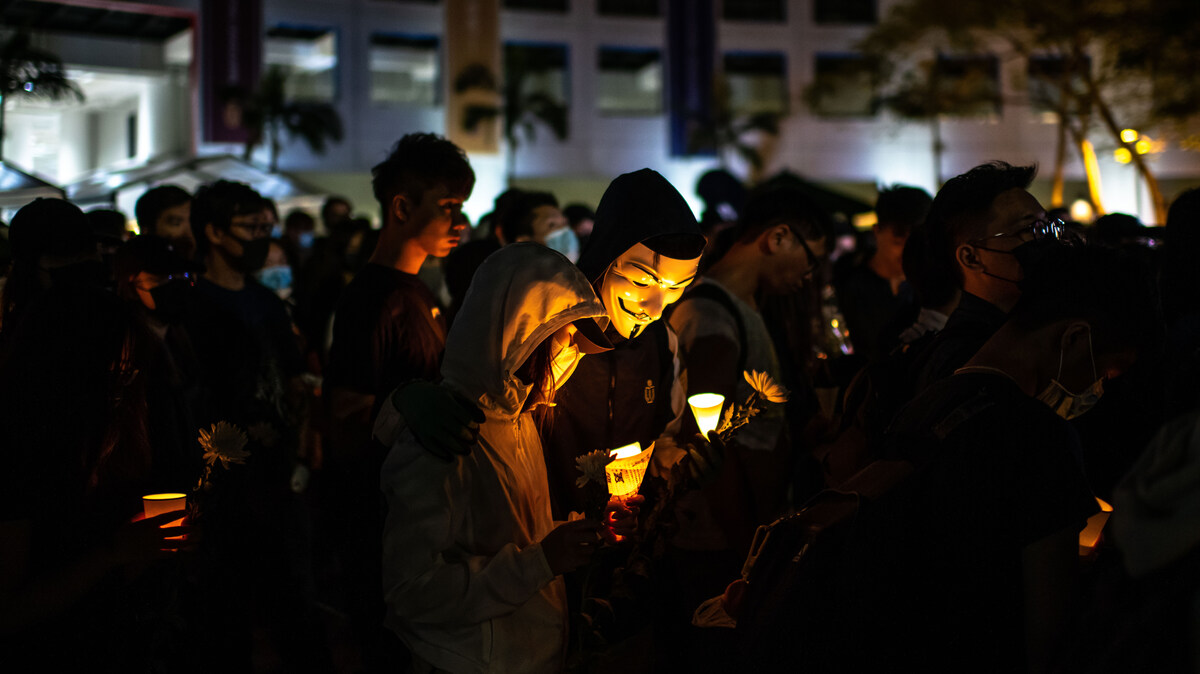 Now, protesters are calling for Hong Kong Chief Executive Carrie Lam to meet a much wider range of demands. These range from the particular — an independent probe into the police's alleged use of excessive force — to the vast — an overhaul of Hong Kong's electoral system to open it up to more voters.

Chow's death is likely to fan those angers. Mourners on Friday, for instance, mingled their expressions of grief with anti-government chants, according to the Los Angeles Times: "Murder must be compensated with life! A debt in blood must be paid in blood!" and "Hongkongers, revenge!"

Authorities in Hong Kong, for their part, denied that police had a direct role in Chow's death: "There are accusations that police officers chased after the man before his fall," said Suzette Foo, a police superintendent in the district of Kowloon. "We must clarify that it is certainly false."

Protesters say police directly contributed to Chow's death, not only by tactics to roust protesters, but also by delaying first responders, who they say had to proceed to the scene on foot after police cars reportedly blocked the ambulance.

"We don't trust them at all," said Denze Lai, a 27-year-old medic who attended a vigil held at the parking garage. "The fire service department and Medics both have conflicts with the police. The police obstruct the ambulance work, but they deny it."

Last month, a police officer shot and seriously wounded a protester, while other deaths have been less directly linked with the months-long protest movement. In June, a demonstrator fell to his death while unfurling protest banners, while several young people involved in the protests have killed themselves.

"In recent weeks the Hong Kong authorities have granted themselves sweeping new powers to suppress protests, and invoked the Emergency Regulations Ordinance to ban face coverings at public gatherings," Man-Kei Tam, the director of Amnesty International Hong Kong, said in a statement Friday. "Tactics deployed by the Hong Kong police has been increasingly alarming, marked by an apparent thirst for retaliation."

Chow's death is likely to animate rallies this weekend. But as people paused to remember him, there was little doubt his death has moved the city, and deepened its determination to find answers.

"I feel regret and sorrow," said Wong, 18, who asked to be identified just by one name. Her shoulders shook as she cried quietly. "He's around my age, but he passed away like this. He could have had a bright future, but now he has nothing. I hope that he can rest in peace."