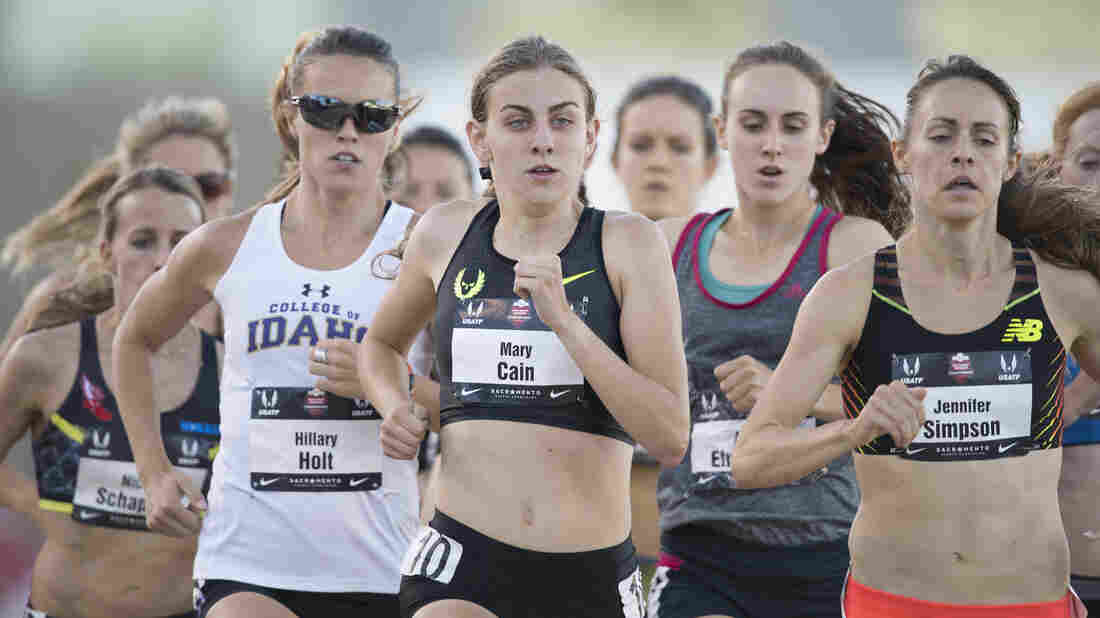 Mary Cain says she endured constant pressure to lose weight and was publicly shamed during her time at the Nike Oregon Project. She's seen here in the 1500-meter race at the 2014 USA Track and Field Championships. Cain won silver in that race; she had turned 18 just a month earlier. Christopher Morris /Corbis via Getty Images hide caption 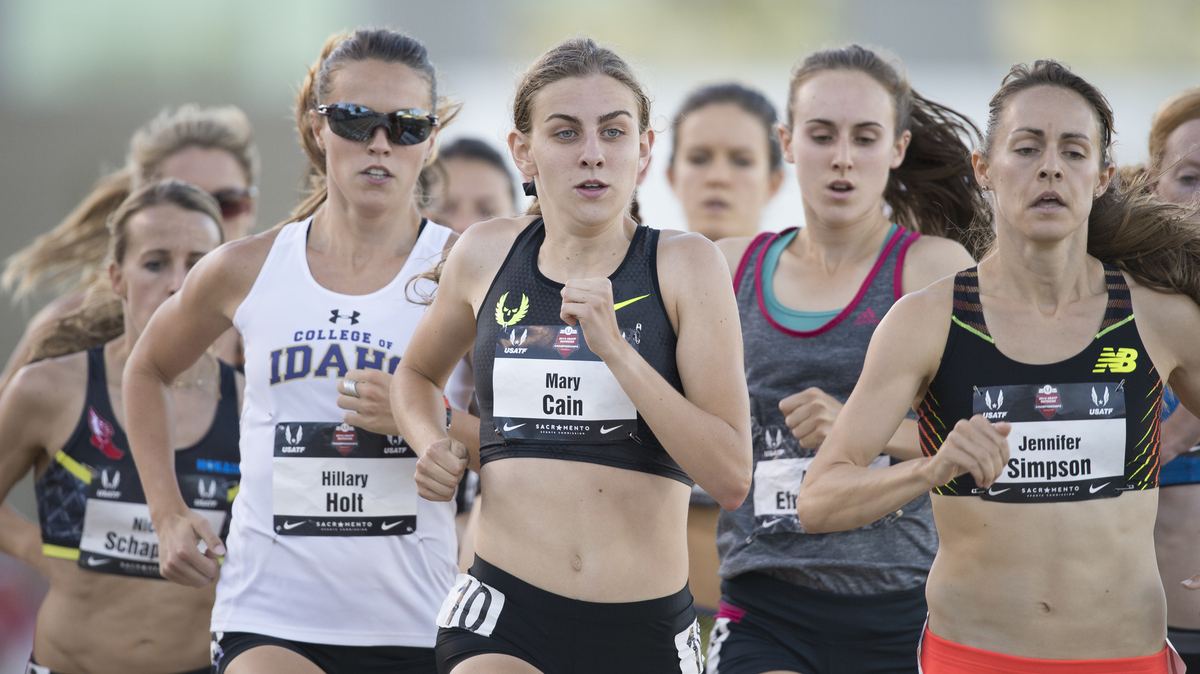 Mary Cain says she endured constant pressure to lose weight and was publicly shamed during her time at the Nike Oregon Project. She's seen here in the 1500-meter race at the 2014 USA Track and Field Championships. Cain won silver in that race; she had turned 18 just a month earlier.

Nike says it's investigating claims of physical and mental abuse in its now-defunct Oregon Project in response to former running phenom Mary Cain's harrowing account of her time under disgraced coach Alberto Salazar.

Cain says she paid a steep price during her time with the elite distance-running program, from self-harm and suicidal thoughts to broken bones related to her declining health.

She is speaking out less than a month after Nike shut down the Oregon Project in the wake of a four-year doping ban against Salazar, which he has said he plans to appeal. A string of elite athletes — Cain's former Oregon Project teammates — say they back her claims.

"I joined Nike because I wanted to be the best female athlete ever," Cain says in an opinion video produced by The New York Times. "Instead, I was emotionally and physically abused by a system designed by Alberto and endorsed by Nike."

Cain, 23, shot to fame in 2012 as a blazingly fast New York teenager who shattered national records. She began training with Salazar full time after finishing high school, skipping the NCAA track circuit altogether. At the time, she was seen as a prodigy, a sure bet to win Olympic gold and set world records. In 2013, she won the International Athletic Foundation's Rising Star Award.

But Cain says that Salazar and other staff members constantly pressured her to lose weight — and that her health suffered dramatically as a result.

Cain says that mantra — and public shaming about her weight — led to a spiral of health problems known as relative energy deficiency in sport, or RED-S syndrome. Also called the female athlete triad, the condition is triggered when athletes take in too few calories to support their training. Next, they stop having menstrual periods — and lose vital bone density as a result.

"I broke five different bones" because of RED-S, Cain says.

Cain says that after a disappointing finish in a race in 2015, Salazar yelled at her in front of a large crowd, saying he could tell she had gained 5 pounds.

"It was also that night that I told Alberto and our sports psych that I was cutting myself and they pretty much told me that they just wanted to go to bed," Cain said. Soon afterward, she says she decided to leave Salazar's program and return home to Bronxville, N.Y.

Salazar denies Cain's accusations against him. NPR's attempts to contact Salazar for comment so far have been unsuccessful. But The Oregonian quotes a statement from the famous coach in which he says, "To be clear, I never encouraged her, or worse yet, shamed her, to maintain an unhealthy weight."

In that message, Salazar also says that Cain "struggled to find and maintain her ideal performance and training weight." But he says he discussed the issue with Cain's father, who is a doctor, and referred her to a female doctor, as well.

In response to Cain's allegations, Nike says, "We take the allegations extremely seriously and will launch an immediate investigation to hear from former Oregon Project athletes."

The company calls Cain's claims "deeply troubling," but it says that neither she nor her parents had previously raised the allegations.

"Mary was seeking to rejoin the Oregon Project and Alberto's team as recently as April of this year and had not raised these concerns as part of that process," a Nike spokesperson said in an email to NPR.

On Friday morning, Cain addressed her recent attempt to rejoin the team, saying via Twitter, "As recently as this summer, I still thought: 'maybe if I rejoin the team, it'll go back to how it was.' But we all come to face our demons in some way. For me, that was seeing my old team this last spring."

No more wanting them to like me. No more needing their approval. I could finally look at the facts, read others stories, and face: THIS SYSTEM WAS NOT OK. I stand before you today because I am strong enough, wise enough, and brave enough. Please stand with me.

Over the summer, Cain says, she became convinced that Salazar only cared about her as "the product, the performer, the athlete," not as a person. She adds that she decided to go public with her story after the U.S. Anti-Doping Agency punished Salazar earlier this year. Now Cain is calling for Nike to change its ways — and to ensure the culture that thrived under Salazar is eradicated.

"In track and field, Nike is all-powerful," Cain says in the Times video. "They control the top coaches, athletes, races, even the governing body. You can't just fire a coach and eliminate a program and pretend the problem is solved."

She adds, "My worry is that Nike is merely going to rebrand the old program and put Alberto's old assistant coaches in charge."

The list of runners who have stepped forward to support Cain includes Canadian distance runner Cameron Levins, a former Olympian and NCAA champion who trained in the Oregon Project.

"I knew that our coaching staff was obsessed with your weight loss, emphasizing it as if it were the single thing standing in the way of great performances," Levins said in a tweet directed at Cain.

"I knew because they spoke of it openly among other athletes," he added.

Another athlete, former NCAA champion Amy Yoder Begley, said she was kicked out of the Oregon Project after she placed sixth in a 10,000-meter race in 2011.

After placing 6th in the 10,000m at the 2011 USATF championships, I was kicked out of the Oregon Project. I was told I was too fat and “had the biggest butt on the starting line.” This brings those painful memories back. https://t.co/ocIqnHDL8F

"I was told I was too fat and 'had the biggest butt on the starting line,' " Begley said via Twitter. "This brings those painful memories back."

Cain says her parents were "horrified" when she told them about her life in the Nike Oregon Project. "They bought me the first plane ride home," she says. "They were like, 'Get on that flight, get the hell out of there.' "

On Friday, Cain thanked Levins for his support and said, "For so long, I thought I was the problem. To me, the silence of others meant that pushing my body past its healthy limits was the only way. But I know we were all scared, and fear keeps us silent."

As for what changes Cain would like to see, she tells the Times that her sport needs more women in power.

"Part of me wonders if I had worked with more female psychologists, nutritionists and even coaches, where I'd be today," Cain says. "I got caught in a system designed by and for men which destroys the bodies of young girls. Rather than force young girls to fend for themselves, we have to protect them."

After being off the track-and-field radar for several years, Cain ran a 4-mile race on Mother's Day in Central Park. In an interview earlier this year, she talked about what she would write in a letter to her younger self.

"I think my letter would say, 'Go have that milkshake. Go see that movie. Go out with that friend. Love running and commit to running but the best way to do that is to love yourself and commit to yourself. Make sure you're doing those other things as well so that once you go out for a run, you're so happy to be there.' "