Accessibility links
More Builders Are Selling Homes Wired For Tech But Data Privacy Is At Stake Smart homes let homeowners turn on lights and unlock doors from a mobile phone. But the technology also sends incredible amounts of data to big tech companies. 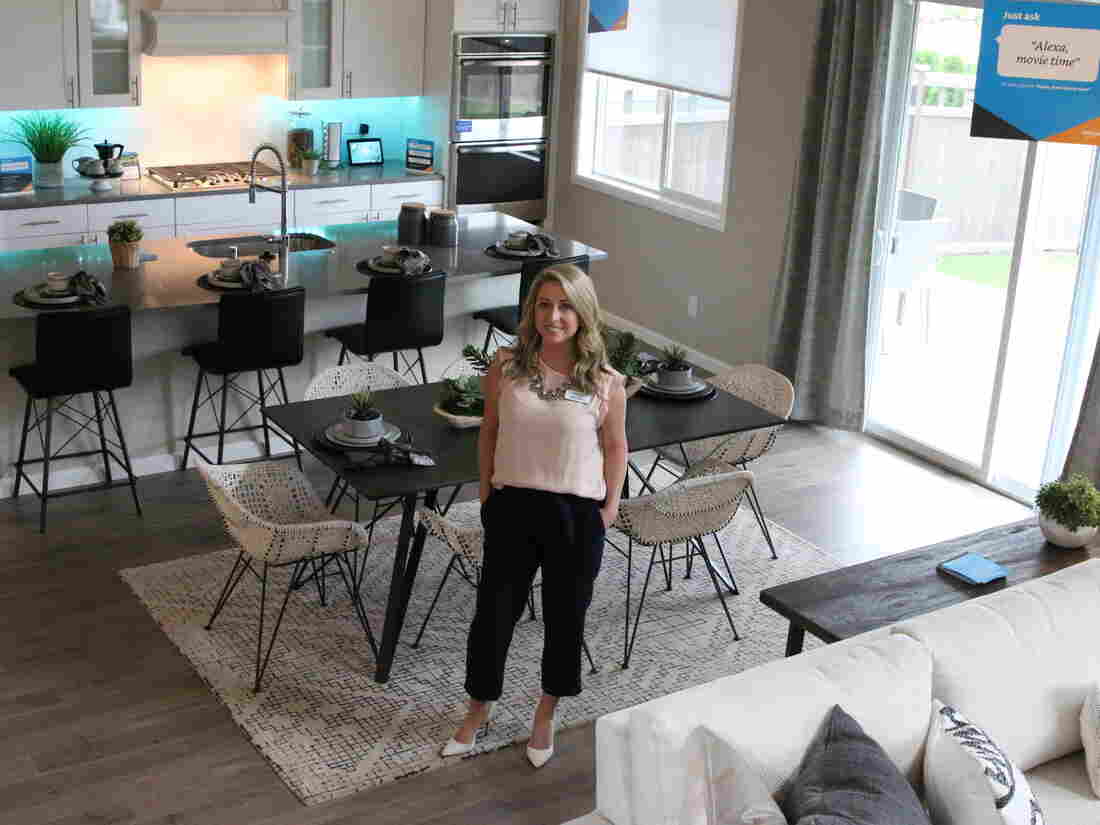 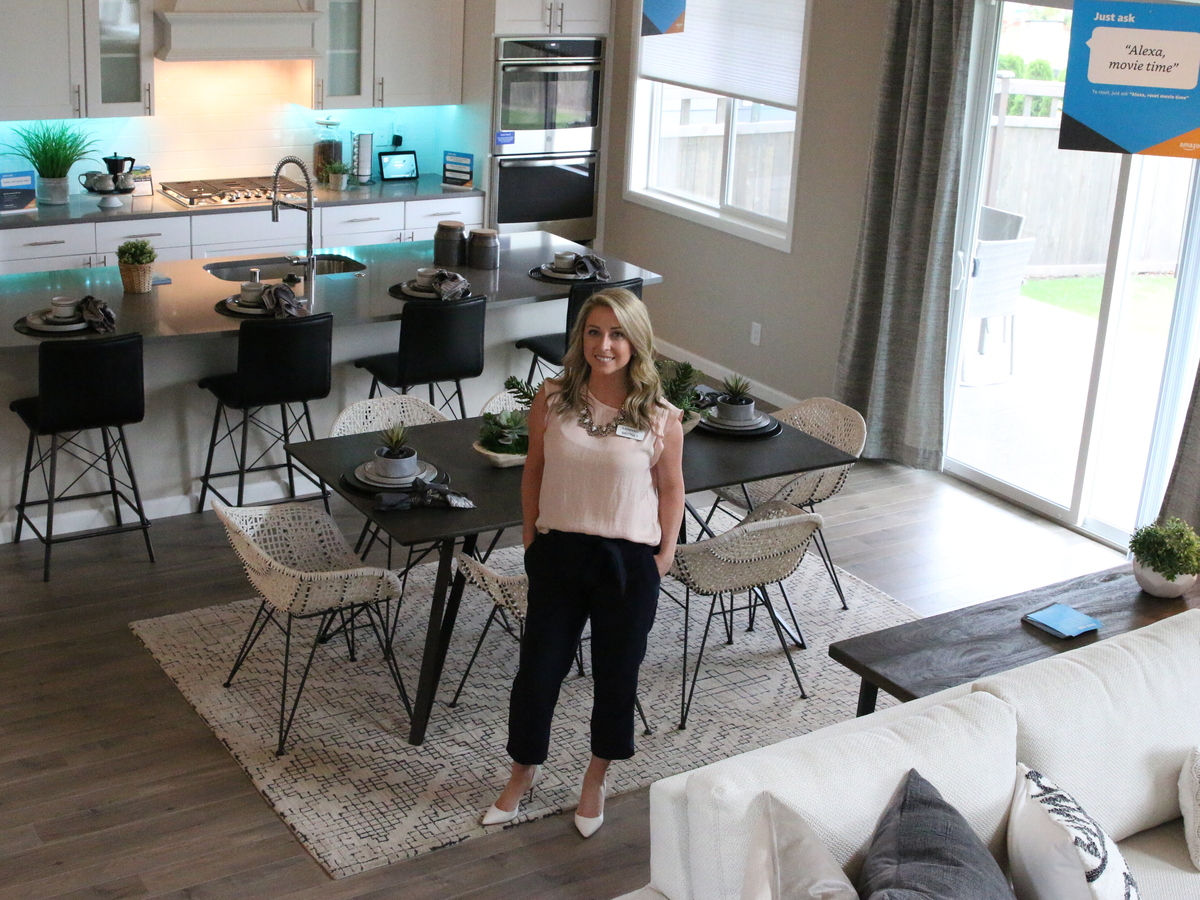 When the Ferguson family decided they wanted to live in the Seattle suburb of Black Diamond they weren't in the market for a smart home. But they wound up with one, a house packed with Internet-connected devices.

Fifteen-year-old Macey Ferguson loves it. "I just feel really fancy," she says about having Amazon's Alexa there to turn on the lights for her, or to remind her when to go to cheerleading practice. "I feel like she's my little servant, or butler." Her older brother uses it for math homework, her younger sister for calling grandma. Her three-year-old brother asks Alexa for cake recipes so he can stare longingly at the photos.

Kelli Ferguson, the mom in this household, is more ambivalent. On the one hand, it's nice to ask Alexa to heat up the house before crawling out of bed in the winter. On the other, there's all those cameras. "If I'm walking on our street, I walk on the other side of the street," she said, meaning the side without the smart homes. "Just because I don't feel like being on everyone's cameras."

Living in a smart home neighborhood, the Fergusons experience both convenience and surveillance. And that's typical in Black Diamond, where Lennar Homes offers smart homes as part of a 4,800 unit development that includes other builders. This neighborhood isn't a one off. There are smart home developments in suburbs outside of cities such as Miami and San Francisco. Lennar is making Amazon tech standard on each of the 45,000 homes it builds this year.

This partnership between builders and Amazon benefits both sides. Amazon wants to push for wider adoption of its Echo smart speaker. Lennar relies on Amazon to help distinguish it from other home builders in communities like Black Diamond.

Amazon really wants you to think so. In Black Diamond, the pitch starts at the Amazon Experience Center, a model home just around the corner from the Fergusons.

Lennar New Home consultant Brittney Svach throws out commands like a smart home samurai, using her voice to lock the door, start up the robot vacuum, dim the lights, close the blinds, and call up a feed on the smart television from one of the home's many surveillance cameras. "Alexa, show me the backyard," she commands. Up pops a video. "And now we can spy on whoever's having a drink out on the patio," she says with a smile.

Amazon has a lot of ground to cover if it wants to build a market of consumers hungry for smart homes. A Zillow survey says smart homes technology is down the list of desired home features, lagging far behind air conditioning and ample storage. It's roughly as important as a hot tub for those shopping for a home.

But Dave Garland thinks the technology will take off once people try it. He's with Second Century Ventures, an investment arm of the National Association of Realtors. "There's a new narrative when it comes to what 'home' means," he says. "It means a personalized environment where technology responds to your every need. "

Black Diamond resident Drew Holmes buys that line. Like the Fergusons, he wasn't looking for a smart home, but the technology came with the one he happened to like. Now he enjoys all the smart home features. "I would not live without them," he said.

His favorite is a Ring doorbell that logs visitors. "I have teenagers," he said. "It's nice to confirm when they come home. And I have proof of it."

Therron Smith had a very different reaction to the smart home pitch. "The thought of having cameras in every room and that potential exposure... just kind of made us nervous about it," he says.

Smith works in tech, and says that's how he knows the risks. It's not just cameras, even light switches capture information. "That data's not just sitting there, just ... empty," he says. "Somebody's gonna look at it and leverage it, to try to turn a profit, or try to create an ad, or try to create some revenue."

When newcomers purchase a home in Black Diamond, they're not just buying property – they're staking out a position on how far they'll allow tech companies to intrude into their lives. That's something many us will need to navigate if this technology becomes standard in more neighborhoods.

You can learn more on how Amazon is changing us by subscribing to the KUOW podcast, Primed.

Editor's note: Amazon is one of NPR's recent financial supporters.