Accessibility links
Indian Supreme Court Rules Disputed Territory Belongs To Hindus The territory, in northern India, was the site of a 16th century mosque, torn down in 1992 by Hindu extremists. Judges paved the way on Saturday for a Hindu temple to be built there. 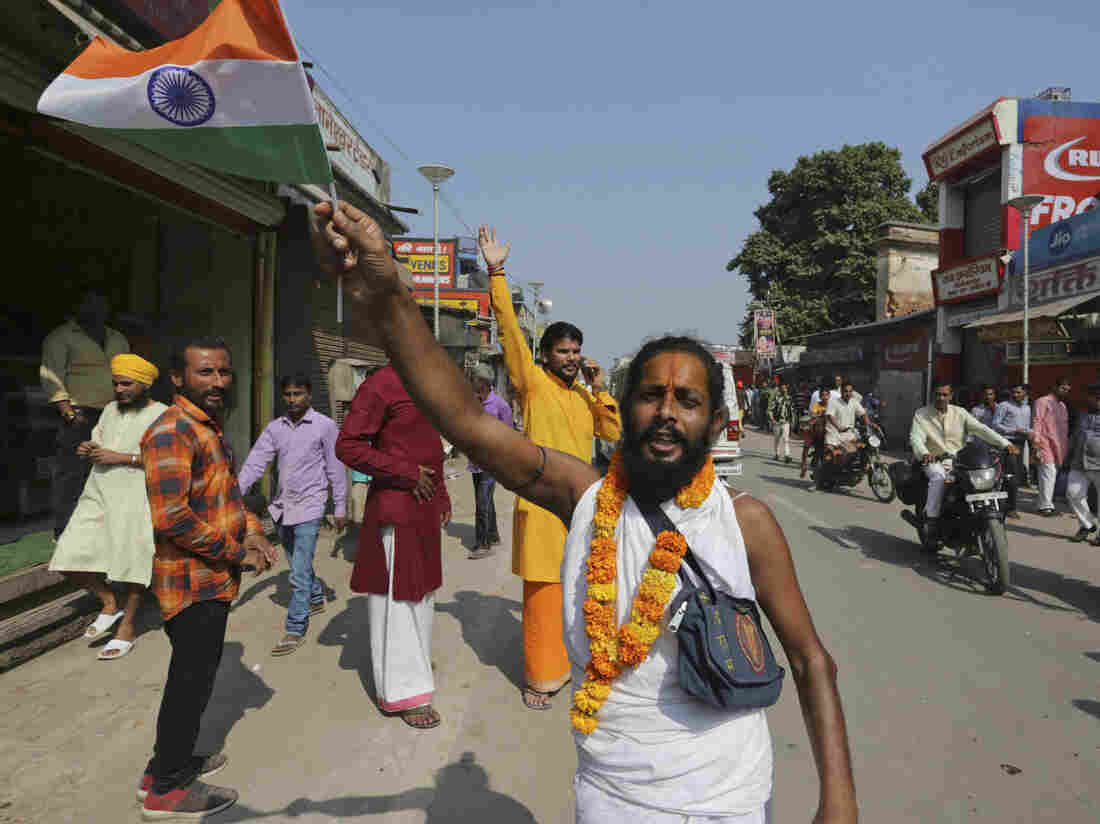 A Hindu devotee waves an Indian national flag and celebrates a verdict in a decades-old land title dispute between Muslims and Hindus, in Ayodhya, India, on Saturday. Rajesh Kumar Singh/AP hide caption 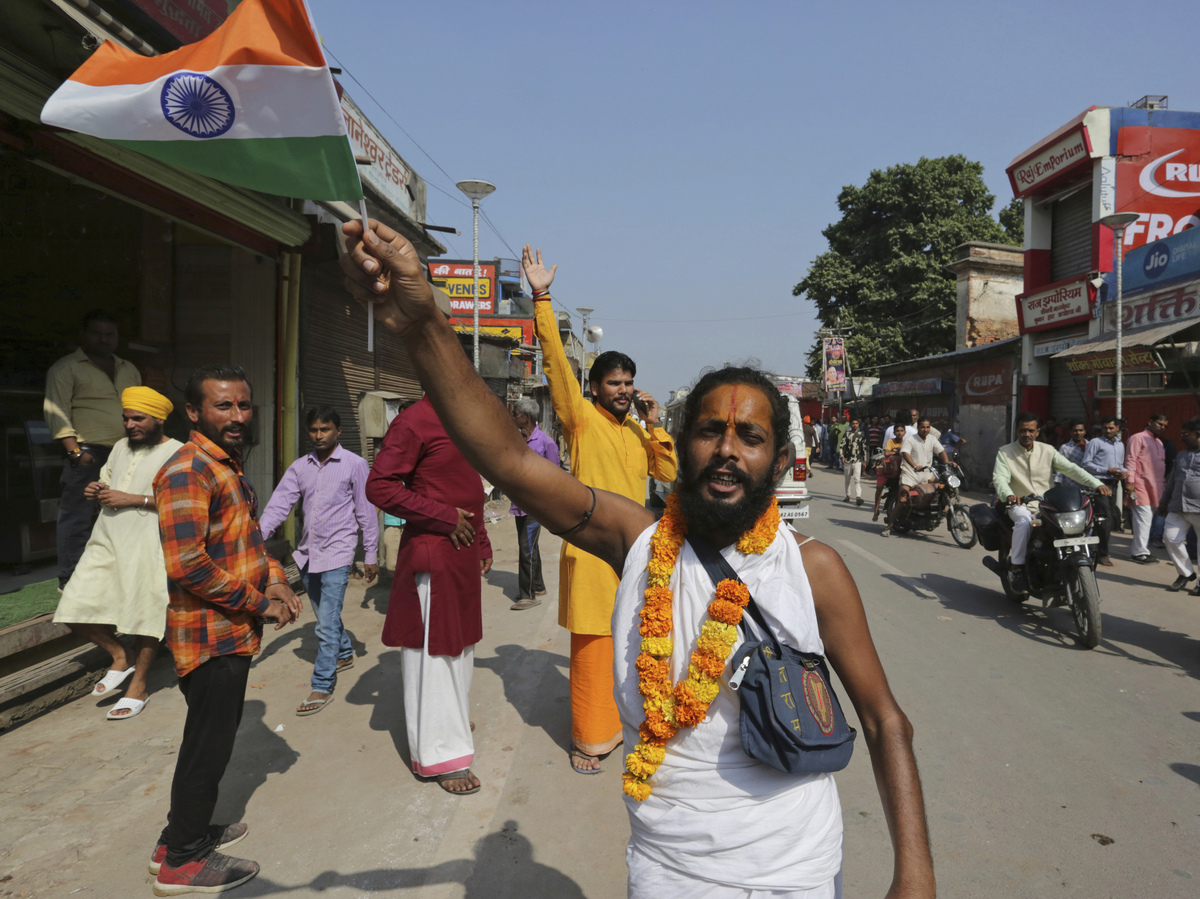 A Hindu devotee waves an Indian national flag and celebrates a verdict in a decades-old land title dispute between Muslims and Hindus, in Ayodhya, India, on Saturday.

Hindus and Muslims in India have been arguing over a 2.77-acre patch of land for centuries. Now, after a bitter and protracted legal battle, India's Supreme Court says the land should be handed over to the Hindu side.

The disputed plot is in Ayodhya, a town in the northern Indian state of Uttar Pradesh. It's where one of India's most famous Muslim emperors built a triple-domed mosque in the 16th century — on the exact spot where Hindus believe one of their gods, Lord Ram, was born millennia earlier. In 1992, Hindu extremists armed with hammers and tridents tore down the sprawling Babri mosque, sparking sectarian violence that spread across South Asia and the Middle East.

On Saturday, India's Supreme Court sought to end a long dispute over the empty land where the mosque once stood — by siding with the Hindus, who plan to build a grand Hindu temple there. Judges ordered the Indian government to set up a trust, which would legally own the land. The court also ordered 5 acres of land to be allocated to the Muslim side at a separate spot in Ayodhya.

The once-fringe ideology that inspired Hindu extremists to demolish the Babri mosque nearly three decades ago has gone mainstream. The 1992 attack was an important milestone for Hindu nationalists; they now rule India.

This case was so sensitive that the Indian government deployed thousands of security forces, closed schools and banned large gatherings to discourage any violence.

"This verdict shouldn't be seen as a win or loss for anybody," Prime Minister Narendra Modi tweeted, urging calm.

The Honourable Supreme Court has given its verdict on the Ayodhya issue. This verdict shouldn’t be seen as a win or loss for anybody.

Be it Ram Bhakti or Rahim Bhakti, it is imperative that we strengthen the spirit of Rashtra Bhakti.

May peace and harmony prevail!

But the court ruling will help Modi's Hindu nationalist Bharatiya Janata Party (BJP) deliver one of its oldest campaign promises: to build a large Hindu temple to Lord Ram at the controversial site. (Currently, faithful are able to pay their respects to a small Ram idol under a tarp at the site.)

"Let us move on from the events of the past and come together in fulfilling our duty by building a grand Ram temple," Mohan Bhagwat, chief of the Rashtriya Swayamsevak Sangh (RSS), which is often seen as the parent organization or inspiration of the BJP, told reporters Saturday. RSS members were among those involved in the demolition of the mosque more than a quarter century ago.

It's unclear when Hindus, who'll soon control the land, will actually lay the cornerstone of their new temple. The government has three months to set up the land ownership trust. For years, activists have said they have construction materials ready.

After the mosque was destroyed in 1992, riots spread across India and the region, and thousands of people — mostly Muslims — were killed. On Friday, the Indian government took steps to prevent similar violence. Authorities are monitoring social media for incendiary comments, and in many cities, including Mumbai, public gatherings of more than four people have been banned.

No major violence has been reported so far.

The Hindu side rejoiced at the unanimous ruling of the court's five-judge bench. Alok Kumar, a lawyer representing the Vishwa Hindu Parishad, one of the Hindu litigants, hailed the judgment as "one of the greatest judicial verdicts in the world."

The Sunni Waqf Board, one of the main Muslim litigants, said it was not satisfied with the ruling but made clear that it would not challenge it. Iqbal Ansari, another litigant, called the verdict a "sort of victory" for Muslims.

Asaduddin Owaisi, a prominent Muslim member of India's parliament, decried the verdict as a "victory of faith over facts" and tweeted that "[Muslims] don't need 5-acre land as a charity."

This landmark verdict in the country's oldest land dispute was announced a week before India's chief justice is due to retire. And it came after a marathon 40 days of hearings, which ended in October — the second-longest proceedings in the history of India's Supreme Court.