Accessibility links
500 Years Later, The Spanish Conquest Of Mexico Is Still Being Debated The meeting of Aztec Emperor Montezuma II and Hernán Cortés and the events that followed weigh heavily in Mexico half a millennium later. 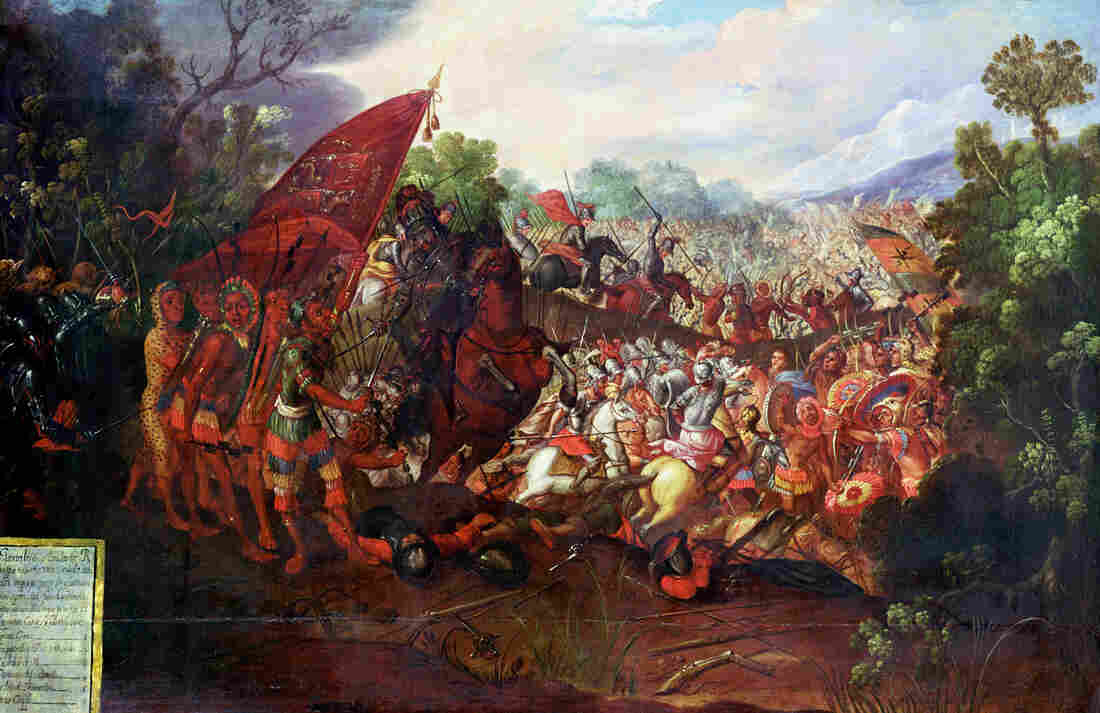 An artistic rendering of the retreat of Hernán Cortés from Tenochtitlán, the Aztec capital, in 1520. The Spanish conquistador led an expedition to present-day Mexico, landing in 1519. Although the Spanish forces numbered some 500 men, they managed to capture Aztec Emperor Montezuma II. The city later revolted, forcing Cortés and his men to retreat. Ann Ronan Pictures/Print Collector/Getty Images hide caption 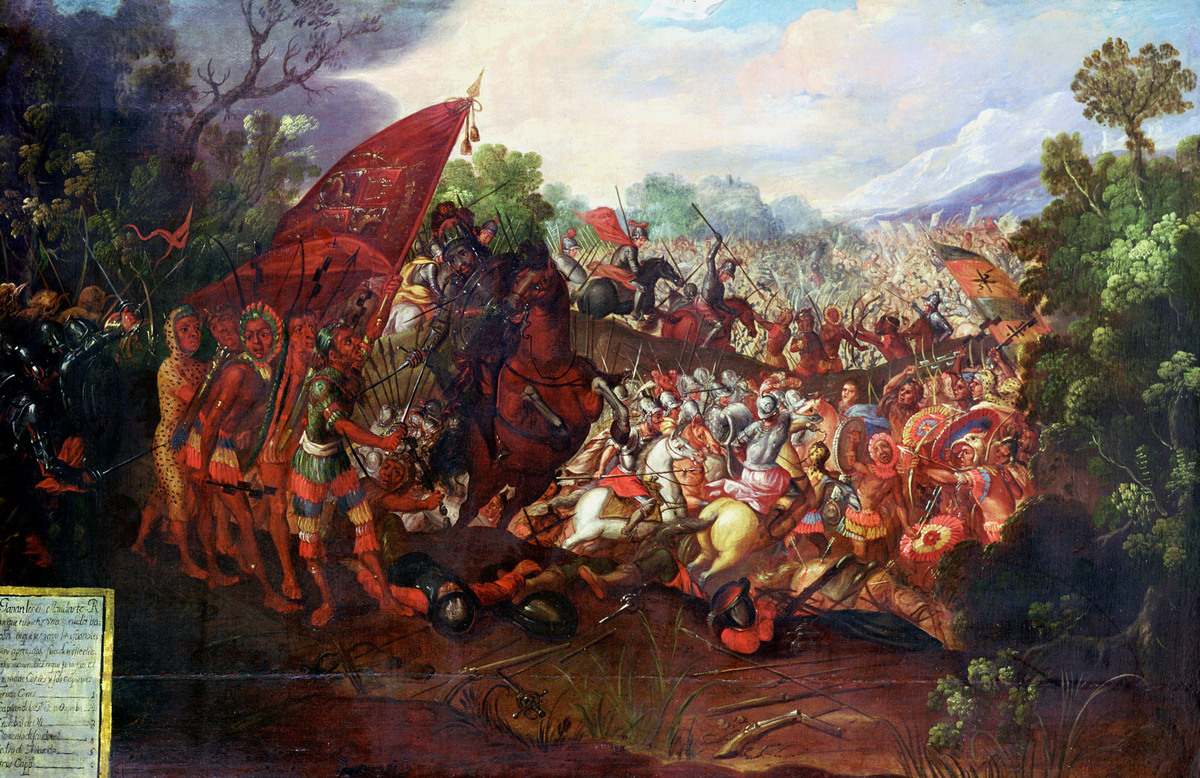 An artistic rendering of the retreat of Hernán Cortés from Tenochtitlán, the Aztec capital, in 1520. The Spanish conquistador led an expedition to present-day Mexico, landing in 1519. Although the Spanish forces numbered some 500 men, they managed to capture Aztec Emperor Montezuma II. The city later revolted, forcing Cortés and his men to retreat.

Five-hundred years ago, two men met and changed much of the world forever.

About 500 Spanish conquistadors — ragged from skirmishes, a massacre of an Indigenous village and a hike between massive volcanoes — couldn't believe what they saw: an elegant island city in a land that Europeans didn't know existed until a few years before.

"It was all so wonderful that I do not know how to describe this first glimpse of things never heard of, seen or dreamed of before," wrote conquistador Bernal Díaz del Castillo.

The date was Nov. 8, 1519. Bernal's leader, Hernán Cortés, walked them down a causeway leading into the Aztec capital, Tenochtitlán, and was greeted by this land's most powerful man: Emperor Montezuma II. (Montezuma was Mexica, but the term Aztec is often used to denote the triple alliance of civilizations that made up his empire.)

According to Cortés, Montezuma immediately recognized the divine right of the Spanish and the Catholic Church to rule these lands and he surrendered his empire.

But according to historian Matthew Restall, author of the book When Montezuma Met Cortés, this is simply wrong.

"The more that I thought about [the surrender], the more I decided it just didn't quite make sense," he tells NPR. "But then what really got me interested was this question, 'If it's a lie, how has it lasted for 500 years?' "

The meeting of Montezuma and Cortés — in what today is Mexico City — and the true story of the conquest that followed it still weigh heavily in Mexico half a millennium later.

"We have not forgotten this issue and continue believing they should offer an apology for the invasion," he said during a news briefing in October. So far, Spain has rejected that request.

The story of the Spanish conquest, as it has been commonly understood for 500 years, goes like this: Montezuma surrendered his empire to Cortés. Cortés and his men entered Tenochtitlán and lived there peacefully for months until rebellious Aztecs attacked them. Montezuma was killed by friendly fire. The surviving conquistadors escaped the city and later returned with Spanish reinforcements. They bravely laid siege to Tenochtitlán for months and finally captured it on Aug. 13, 1521, with the Spanish taking their rightful place as leaders of the land we now know as Mexico. Conquest accomplished.

"History is messy, and this story tidies up all of that mess and turns the messy, unpleasant war that took place 500 years ago into a nice, tidy dramatic narrative that has a hero [Cortés] and antihero [Montezuma] and has some kind of climactic, glorious ending," says Restall.

In When Montezuma Met Cortés, Restall revises this story. He ditches the word "conquest" and instead refers to the time as the Spanish-Aztec war. He says Cortés was a "mediocrity" with little personal impact on the unfolding of events and refocuses on complex territorial battles between the Aztecs and their rivals. The Tlaxcallan Empire, which allied with the Spanish, was the driving force, outnumbering conquistadors 50-to-1 during the war with the Aztecs. Smallpox and a betrayal from an Aztec ally dealt the final blow. The wondrous island city fell, but it would take years for the Spanish to establish control in New Spain.

The messy history of the Spanish and Aztecs is still strikingly visible in the center of Mexico City. Right next to the imposing Metropolitan Cathedral (a centuries-long expansion of the first Spanish church built here, in the 1520s) sit the remains of the Aztec Templo Mayor, or Great Temple, buried beneath the city surface. 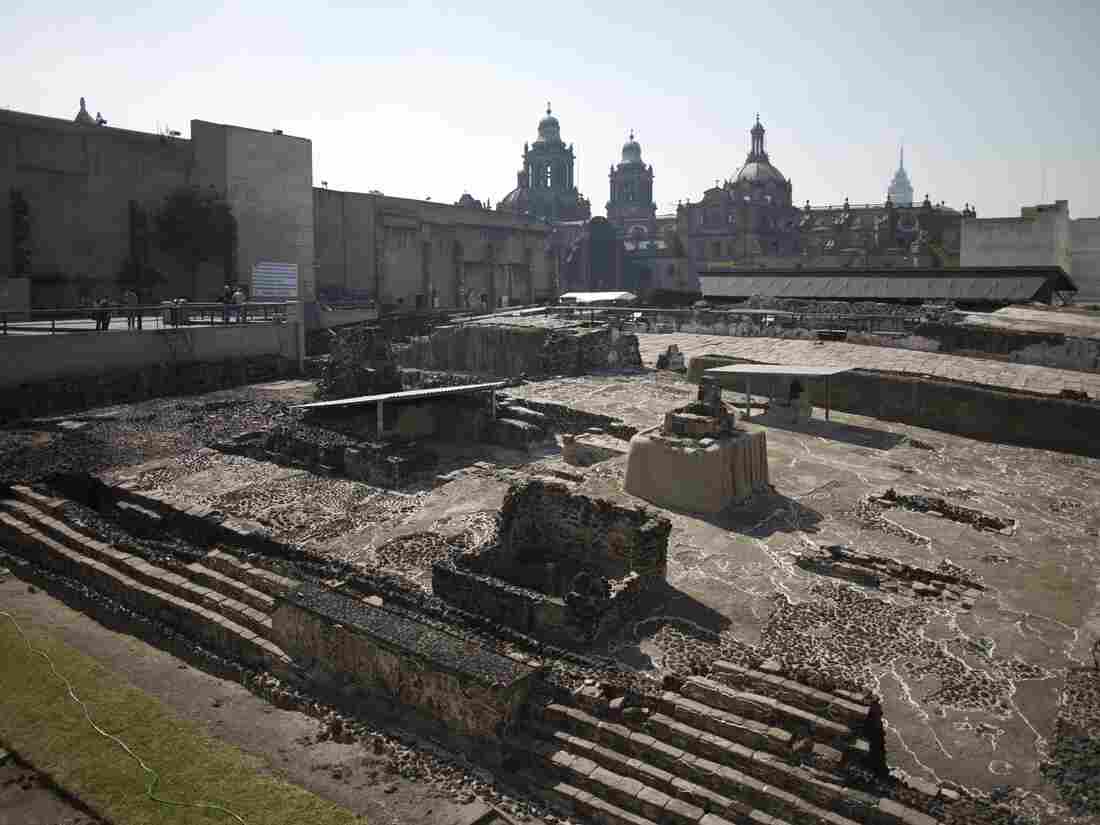 Archaeologists have made key discoveries about the Aztecs at the Great Temple site in Mexico City. Eduardo Verdugo/AP hide caption 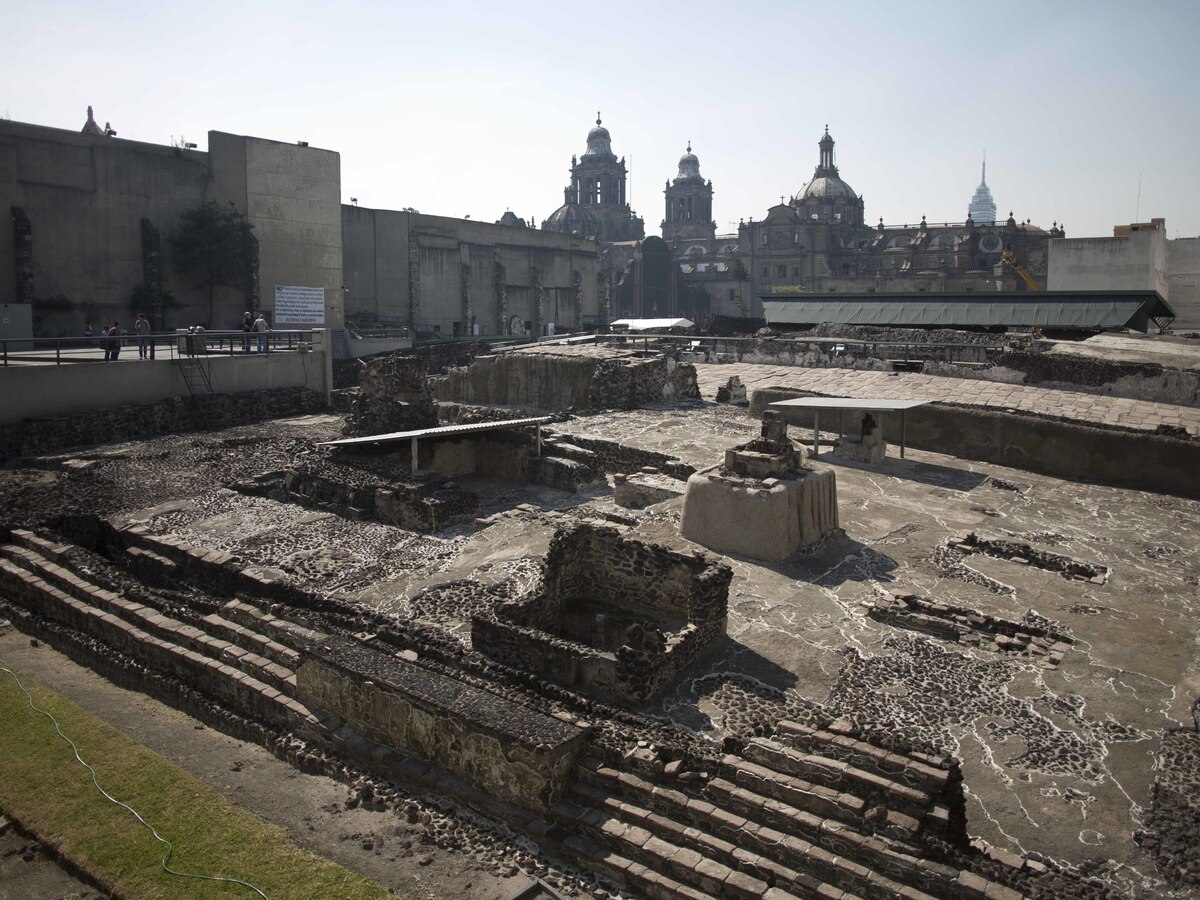 Archaeologists have made key discoveries about the Aztecs at the Great Temple site in Mexico City.

"After they arrived here on Nov. 8, it's likely that the first place the Aztecs brought the Spanish was here to the Great Temple," says Carlos Javier González González, former director of the Great Temple project. "Symbolically, the Great Temple was the center of the universe to the Aztecs. It was the point from which the world turned."

NPR joined González and Raúl Barrera Rodríguez, director of the urban archaeology program at Mexico's National Institute of Anthropology and History, for a tour around the Great Temple's remains.

For centuries, Spanish testimony portrayed the Aztecs and other Indigenous groups in the Americas as uncivilized, savage barbarians. But continued excavation of the Great Temple and Tenochtitlán has helped change that perception.

"Tenochtitlán was a huge city," says Barrera. "It had public institutions, a whole system of government, public servants, schools, public services — it was a totally organized city."

After the fall of Tenochtitlán, the Spanish built their city directly on top of it. Barrera's urban archaeology program, which has first rights to excavation at any buildings under construction or renovation in Mexico City's historical center, aims to reveal this underground city.

"It's like a puzzle we're trying to put together," he says.

In 2017, Barrera's team uncovered the Huey Tzompantli, a tower of human skulls that was a monument to the Aztecs' highest deity, Huitzilopochtli, the god of war and the sun. The conquistadors described a terrifying satanic sight. It was precisely the opposite for Aztecs.

"It is important to understand the worldview of the Aztecs," says Barrera. "The tzompantli was about giving life."

As Barrera explains, the Aztecs had deep, complex rituals around death. Aztecs believed their gods needed nourishment to survive and made them offerings of people and animals. For example, offering warriors — primarily prisoners of war — ensured the sun would continue to shine and the Aztecs would be successful in war. The Spanish didn't see it that way.

"The image we have of the Aztecs was overwhelmingly invented by Spaniards at the time," says Restall. "They used it to not only justify the conquest and colonization but any and all acts of violence that subsequently emerged."

About 650,000 people come to learn about the Aztecs at the Great Temple every year, 80% of them Mexican, according to the National Institute of Anthropology and History. José María Rosas, a 62-year-old taxi driver in Mexico City, was visiting it for the first time in early November.

"Seeing this is like going back in time, and I'm recognizing that these are my roots," he says. "Who am I as a descendant of the Indigenous people?"

González says he has seen that attitudes toward pre-Hispanic history have changed during his four decades of work at the Great Temple.

"The interest in and importance of all this is growing, to recover and incorporate our pre-Hispanic history into our identity as Mexicans," he says.

And Restall thinks the implications reach even further.

With Mexico's president still insisting on Spain's apology and calling for "reconciliation" with the Spanish over the conquest, it will continue to be present in modern-day Mexico.