Accessibility links
Book Review:'The Movie Musical!' Is A Symphony In Praise Of The 'Razzmatazz' Of The Genre Jeanine Basinger argues, authoritatively and passionately, that the musical has never really left us, that there's relevance and inspiration to be gleaned from the golden age of Hollywood musicals.

'The Movie Musical!' Is A Symphony In Praise Of The 'Razzmatazz' Of The Genre

'The Movie Musical!' Is A Symphony In Praise Of The 'Razzmatazz' Of The Genre 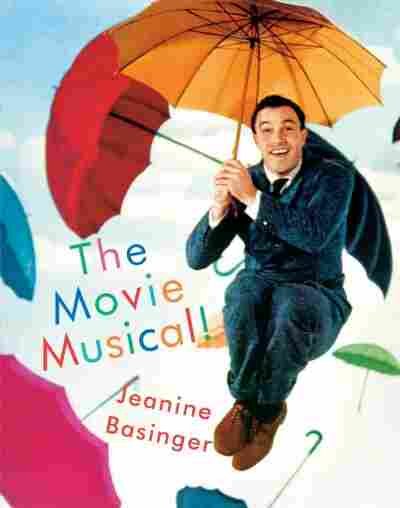 Jeanine Basinger is a veteran film historian and author with a well-respected body of work — including 11 books — behind her. But read her new book, The Movie Musical!, and you might think she's a debut author with something to prove.

And, in fact, she does: As a genre, her beloved movie musical has gradually faded from favor over the decades, to the point where onscreen musicals are viewed more as museum pieces — with the occasional, novelty-like revival — than a vital, contemporary form. Basinger wisely isn't trying to argue that musicals take up more space in the pop-culture consciousness circa 2019 than they actually do. What she does argue, authoritatively and passionately, is that the musical has never really left us, and that there's relevance and inspiration to be eternally gleaned from the golden age of Hollywood musicals.

That golden age, of course, is the 20th century. Basinger traces the history of the musical from its origins in Broadway and vaudeville — not to mention the Big Bang that was Al Jolson's The Jazz Singer in 1927 — to the heyday of Rodgers and Hammerstein, Lerner and Loewe, and Andrew Lloyd Webber and beyond. What The Movie Musical! doesn't do, refreshingly, is tackle these milestones and movers-and-shakers strictly chronologically. The book darts and weaves dexterously through subgenres, superstars, and studio politics, leaving no stone unturned as Basinger assembles a mosaic of the musical's history as it evolves and triumphs amid America's post-WWII prosperity.

Encyclopedic in scope, but thankfully not in structure, The Movie Musicals! is a downright delightful read. Anecdotes abound, from the time musical giants Fred Astaire and Gene Kelly finally appeared together in a song-and-dance number in Ziegfeld Follies to the time MGM's plan to make Frank Sinatra the cinematic face of the African-American standard "Ol' Man River" backfired on them. On the flipside, Marilyn Monroe's rendition of Irving Berlin's "Lazy" from the 1954 film There's No Business Like Show Business "is a PhD thesis" illuminated the sensual power of the big-screen musical number, according to Basinger. And after reading Basinger's beautifully rendered reasons why, there's no doubt of that.

What makes The Movie Musical! truly dazzle, however, is its insight. The effect of MTV's particular wedding of music and image starting in 1981 is gauged against the waning currents of the musical in the '80s; the roles of exploitation films, biopics, animation, and musical revolutions are explored. The story of the entire 20th century is told through musicals, and when the book ventures into the 21st century with, among others, 2016's sumptuous La La Land and 2018's popular revamp of A Star Is Born, it's done with both a sympathetic and a critical eye. And throughout the hefty volume, Basinger addresses — both directly and indirectly — the essential question at the heart of musicals: What compels us to suspend disbelief and accept, if not wholly enjoy, the fantastical idea of people spontaneously breaking into song? What does this sorcery say about the immersiveness of film, and the power of song, and the mechanism of the human imagination?

Hollywood, according to Basinger, created the genre of the musical "with a touch of larceny, a jolt of energy, and a lot of razzmatazz." Beneath all of her studious and scrupulous research, The Movie Musical! taps into that spectacle. Every page is infused not only with Basinger's knowledge, but her overwhelming adoration for the tuneful, silver-screen tales that changed her own life. The book is a passion project, organically rendered, and shot through with longing for an age where sophistication was as subtle as it was scintillating. The Movie Musical! is more than a love letter to a great American artform; it's a symphony.