Accessibility links
Pulling Treasure From The Thames With London's 'Mudlark' "Mudlarks" were the people who made a living picking objects out of the mud along the River Thames. Writer Lara Maiklem follows in their tracks; she chronicles her journeys in a new book, Mudlark. 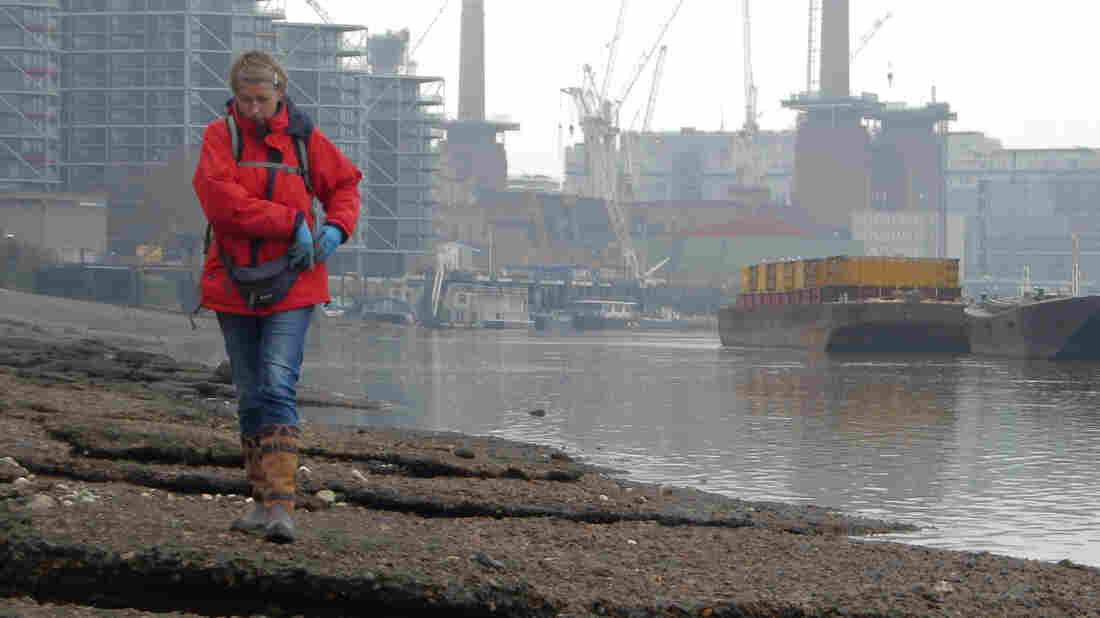 Lara Maiklem searches for treasures along the foreshore of the Thames. Courtesy of Lara Maiklem hide caption 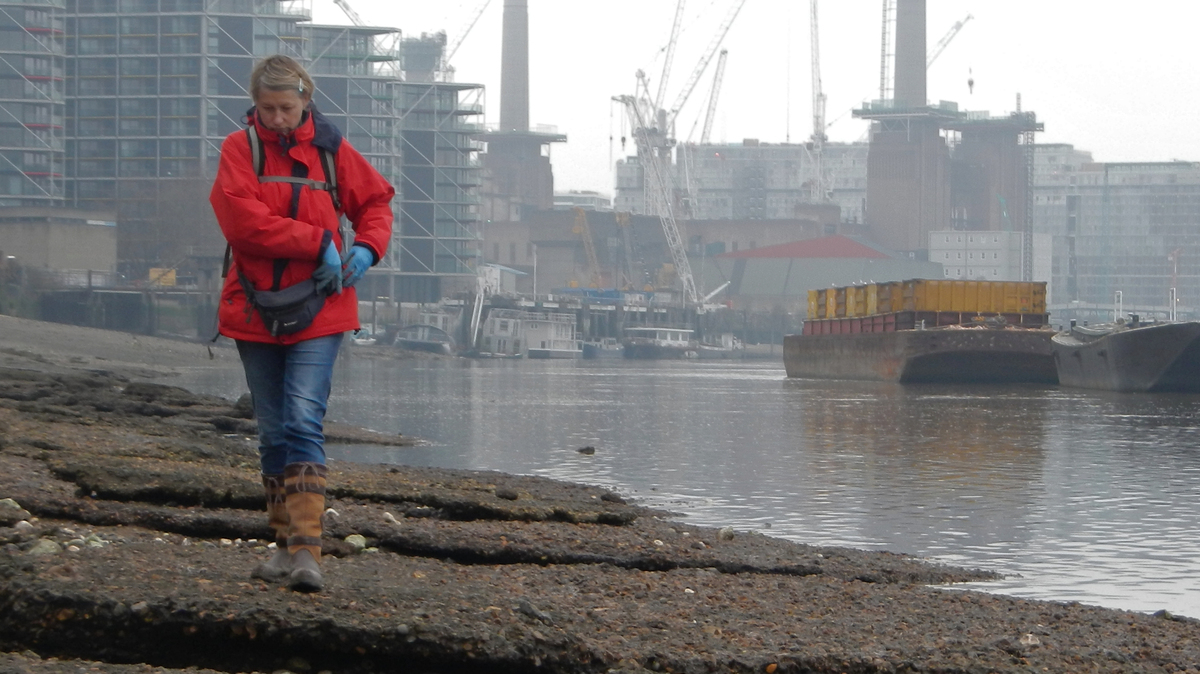 Lara Maiklem searches for treasures along the foreshore of the Thames.

On the north side of the river Thames, between a pub and a railway bridge, there's a rickety staircase down to another world. Or rather, several worlds, layered on top of each other and jumbled together in the slightly stinky river mud. It's a bright, blowy day — seagulls are wheeling overhead, barges pass by in the background, and everywhere I look, there are little fragments of history. 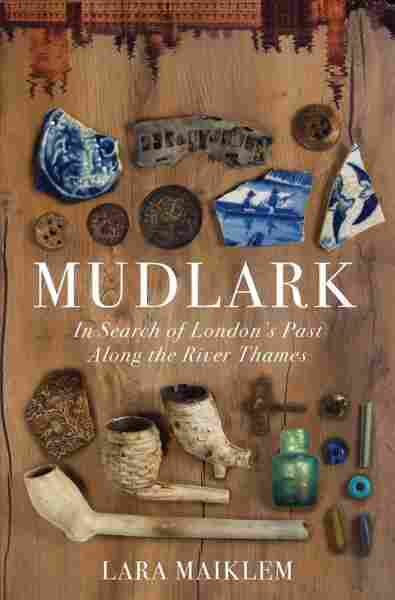 In Search of London's Past Along the River Thames

Centuries ago, poor children scraped a living here, scavenging among piles of bones, household junk and worse that washed down from the city. They were called mudlarks, and their work was dirty and dangerous. Today, people still pick things out of the river mud, but now it's the history they're looking for. Writer Lara Maiklem is one of these modern-day mudlarks — and in fact, her new book is called Mudlark: In Search of London's Past Along the River Thames.

Maiklem been mudlarking for more than fifteen years, and her book is a detailed tour of both the Thames and the treasures you can find there. Like a mysterious brown thing I dig out of the mud by my feet. "That could be Roman," she says. "It hasn't got any glaze on it. It's got some quite large inclusions in it, so it could be a piece of Roman pottery. Well done, well done!"

We're basically walking on a giant garbage dump, Maiklem says. Shattered pottery, chunks of Roman heating ducts, roof tiles scarred by the great fire of London, glass bottles and clay pipes and so, so many bones, the relics of centuries of dinner. These objects tell everyday stories, about lives that don't end up in the history books.

"I'm finding these ordinary pieces that perhaps, almost undoubtedly, nobody's touched since the last person who dropped it," Maiklem says. "Even the prehistoric flints — the last person to touch that was the person who was maybe throwing a spear at some animal that doesn't even exist anymore, and to reach down and pick that up is like reaching back through time, into history itself. It's the closest thing I can imagine to time travel." 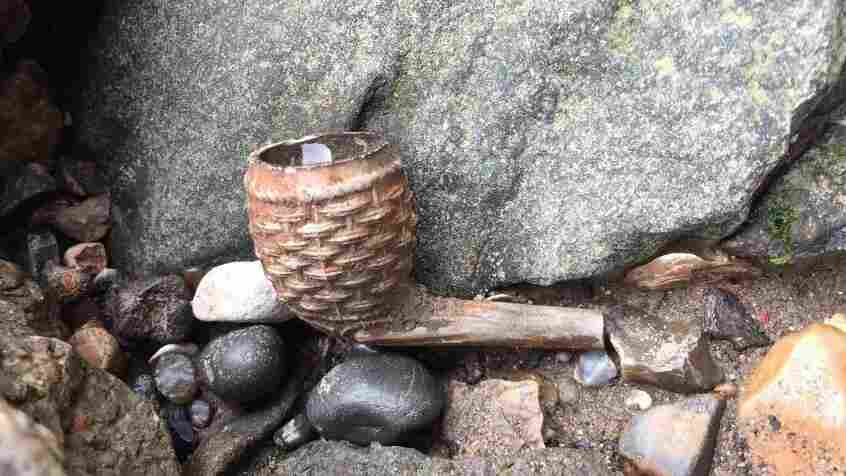 Clay pipes litter the foreshore of the Thames — you almost can't avoid stepping on them. Lara Maiklem hide caption 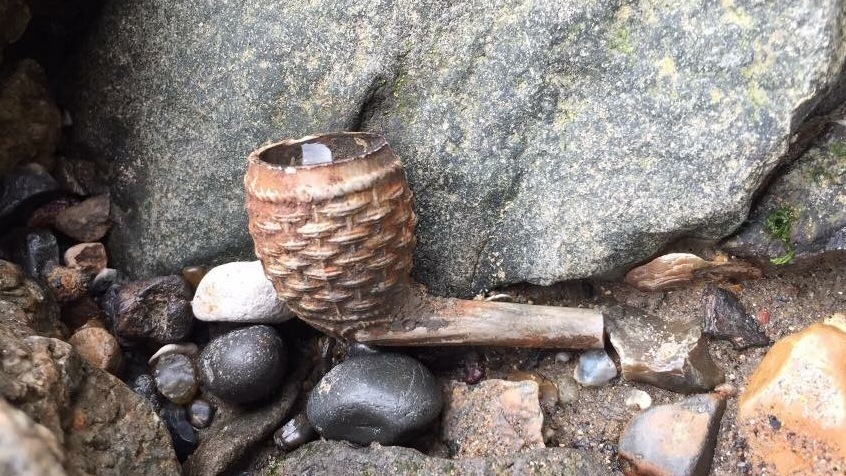 Clay pipes litter the foreshore of the Thames — you almost can't avoid stepping on them.

I should point out here that not everyone can just climb down onto the foreshore and start time traveling. You have to have an official permit, which Maiklem does. And she says some of her very favorite ordinary objects to find are pins. She crouches down and points to an almost invisible cluster of tiny, bent pins glinting in the sun at her feet.

"So this is handmade, they date from about 1400 to 1800," she says, picking up one of the pins. "The pinning industry in this country was huge, so huge that they actually imported pins from France as well, because everybody was pinned into their clothes — so those elaborate ruffs that you see Elizabeth I wearing took hundreds of pins to put together. But they dropped and lost a lot, because they were wearing a lot, and they washed together in certain areas." 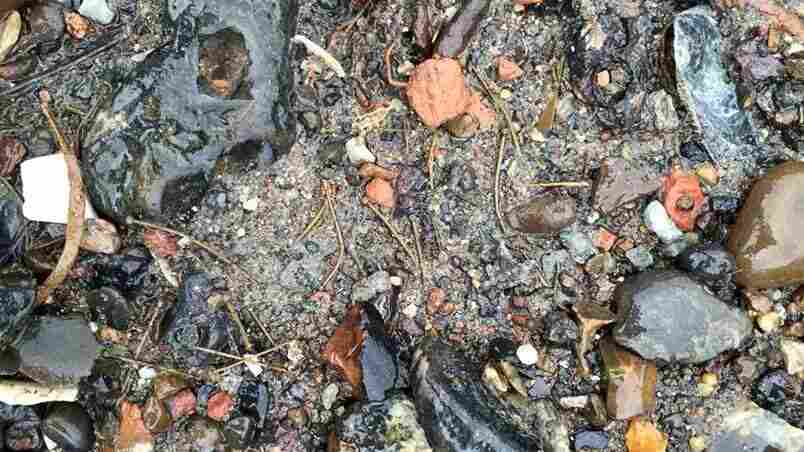 Look closely — do you see the cluster of pins? Maiklem says they're her favorite things to find. Lara Maiklem hide caption 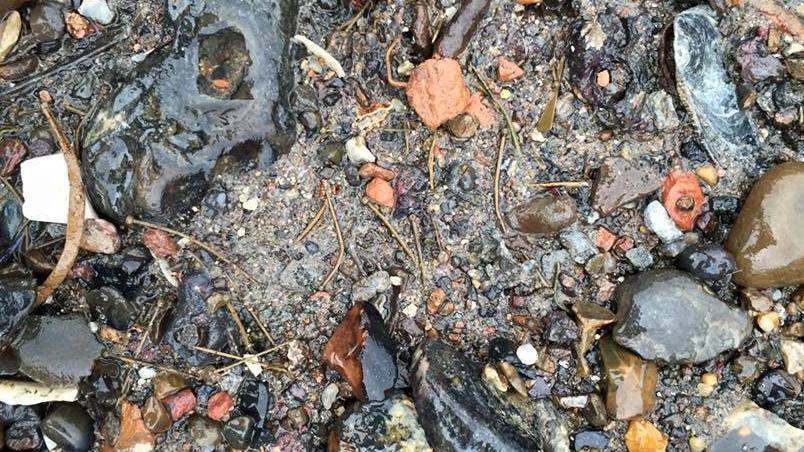 Look closely — do you see the cluster of pins? Maiklem says they're her favorite things to find.

The river sorts things by size, Maiklem says, so if you spot one pin, you're likely to find several all clustered together. That is, if you spot one. It takes a while to train yourself to spot things that aren't sand, mud and pebbles — Maiklem calls it "getting your eye." Once you've spotted something, she says, it becomes a little easier to see similar objects. As we go along, I'm beginning to get my eye — I spot a substantial shard of green-glazed medieval pottery, and a chunk of a Roman heating duct, called a hypocaust.

Whatever I find, Maiklem can identify it at a glance — though she doesn't call herself a historian. "I'm not an archaeologist and I'm not a historian, I've never pretended to be one," she says. "I'm a history seeker, I suppose, and it spurs you into researching, when you find these things." 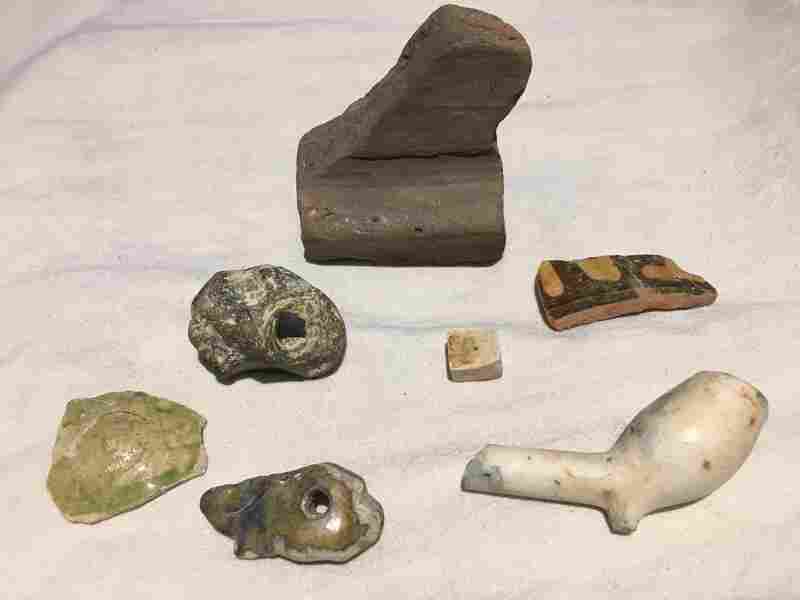 Some of our finds from an afternoon of mudlarking. From the top: A chunk of Roman heating duct, called a hypocaust; a fragment of 17th-century slipware pottery; a clay pipe head; two hagstones, stones with natural holes in them, and a shard of green-glazed medieval pottery. At the center, a Roman mosaic tile. Liza Graham hide caption 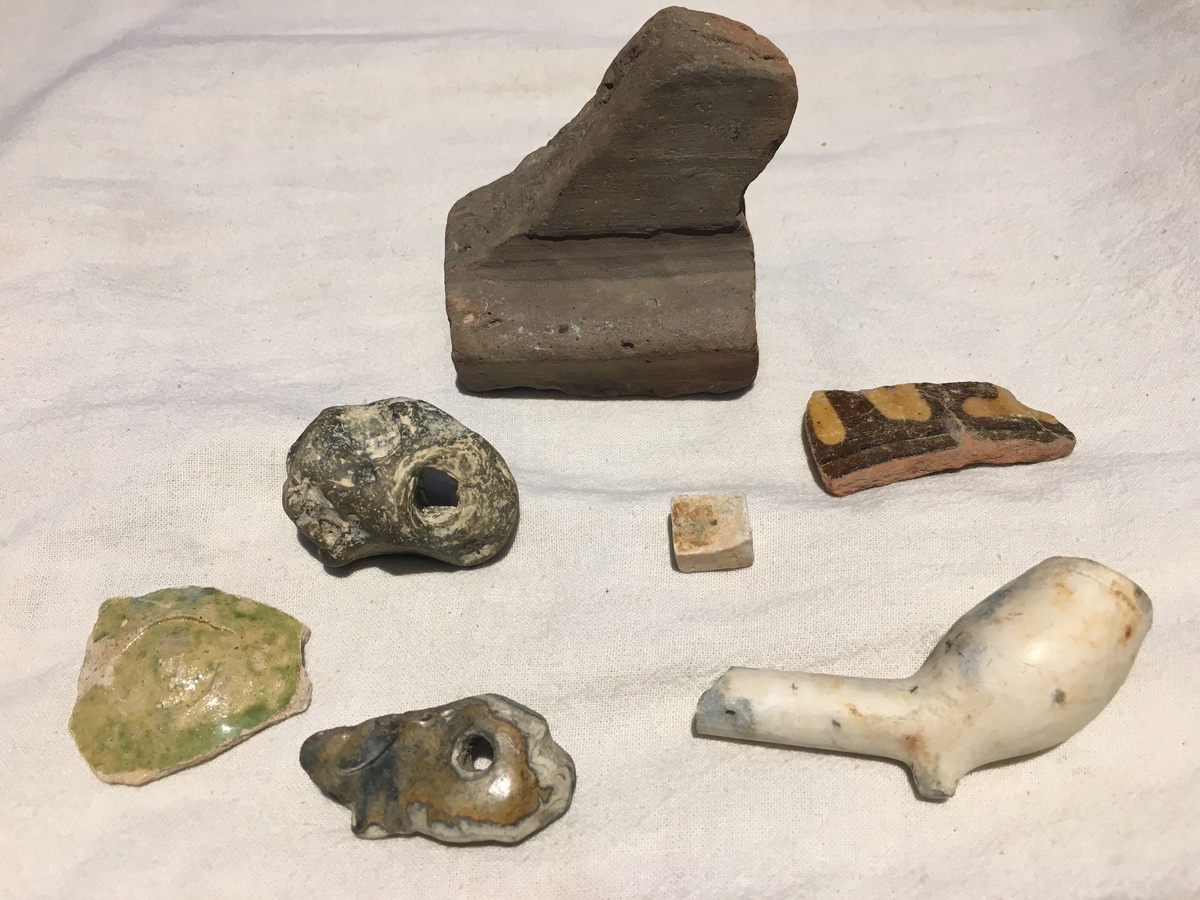 Some of our finds from an afternoon of mudlarking. From the top: A chunk of Roman heating duct, called a hypocaust; a fragment of 17th-century slipware pottery; a clay pipe head; two hagstones, stones with natural holes in them, and a shard of green-glazed medieval pottery. At the center, a Roman mosaic tile.

Maiklem does work with historians — she has a Facebook page where she posts her finds, and a community has grown up around it dedicated to puzzling them out. She's also taken pieces to university history departments and museums — and she says it's important to report what you find. The UK has a program called the Portable Antiquities Scheme that documents the treasures found by metal detectors and mudlarks.

"This is our history. It's our heritage. To take it home, stick it in a drawer and forget about it, it's criminal, I think."

At the end of the afternoon, Maklem spreads out our finds on a convenient riverside rock, arranged chronologically from a Roman mosaic tile to a 17th century clay pipe to a shard of blue and white Victorian pottery — a miniature history of England, picked from the river mud.

This story was edited for radio by Rose Friedman, and adapted for the Web by Petra Mayer