Accessibility links
'Like Getting My Father Back': WWII POW's Art Returned To His Family Howard Weistling dreamed of becoming a great comic strip artist, but he felt compelled to enlist in the Army Air Corps during WWII. He eventually created a comic while a prisoner of war in Germany. 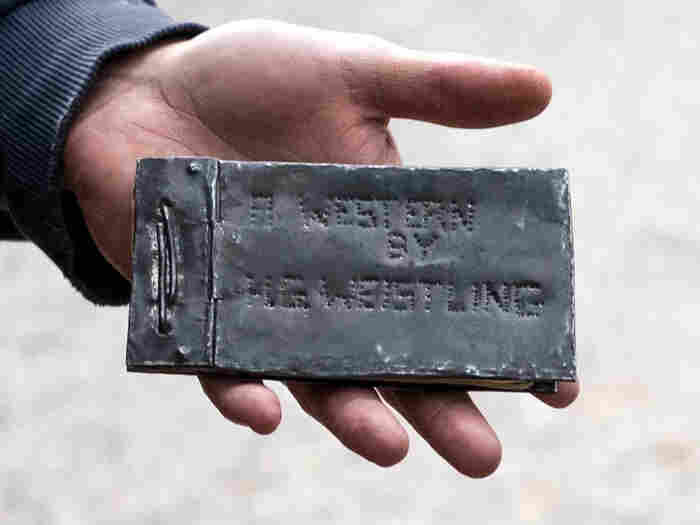 Howard Weistling created his comic book A Western out of cigarette wrappers and flattened soup cans while he was a prisoner of war in Germany during World War II. Morgan Weistling/Morgan Weistling hide caption 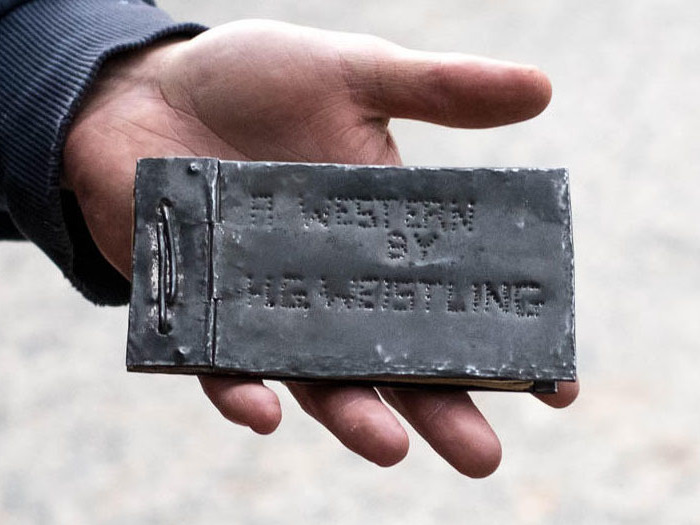 Howard Weistling created his comic book A Western out of cigarette wrappers and flattened soup cans while he was a prisoner of war in Germany during World War II.

Howard Weistling wanted to be a comic strip artist. But when the Japanese bombed Pearl Harbor, Weistling felt compelled to enlist in the Army.

"He probably told me a lot of stories that were not appropriate for a child to hear," Mike Weistling says.

After flight engineer training, Howard was shipped off to Europe. On his maiden flight, his plane was shot down over Austria. Mike has the actual rip cord hung on his wall in Flagstaff, Ariz.

The entire crew of eight men landed safely. But a farmer found Howard hiding in his barn and turned him over to a prisoner of war camp in Barth, Germany. Howard's son Morgan Weistling says it was freezing and the men almost starved to death eating the guards' garbage.

"German soldiers would open the door and after they had their food would throw their plates on the floor," says Morgan Weistling.

Hungry and homesick Howard coped the only way he knew how. He drew a comic strip. The book, made of cigarette wrappers bound together with scrap metal, was sent around camp.

"Every couple of days he would add a new panel," says Morgan. "One panel at a time would be passed around the whole camp. And they'd have something to look forward to."

After an entire year of this, they woke one morning to find their guards gone. They fled before the Russians arrived to liberate the camp. Howard finally got to go home. Just lucky to get out alive, he left the book behind. 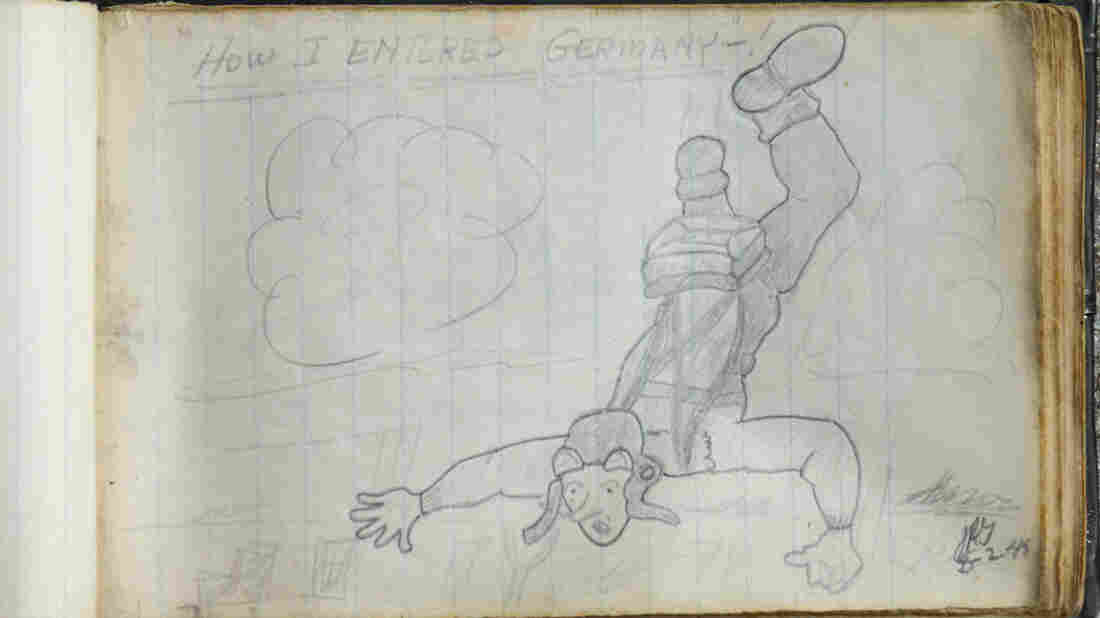 A page of Howard Weistling's comic book A Western, which he created while in a POW in Barth, Germany camp during WWII. Morgan Weistling/Morgan Weistling hide caption 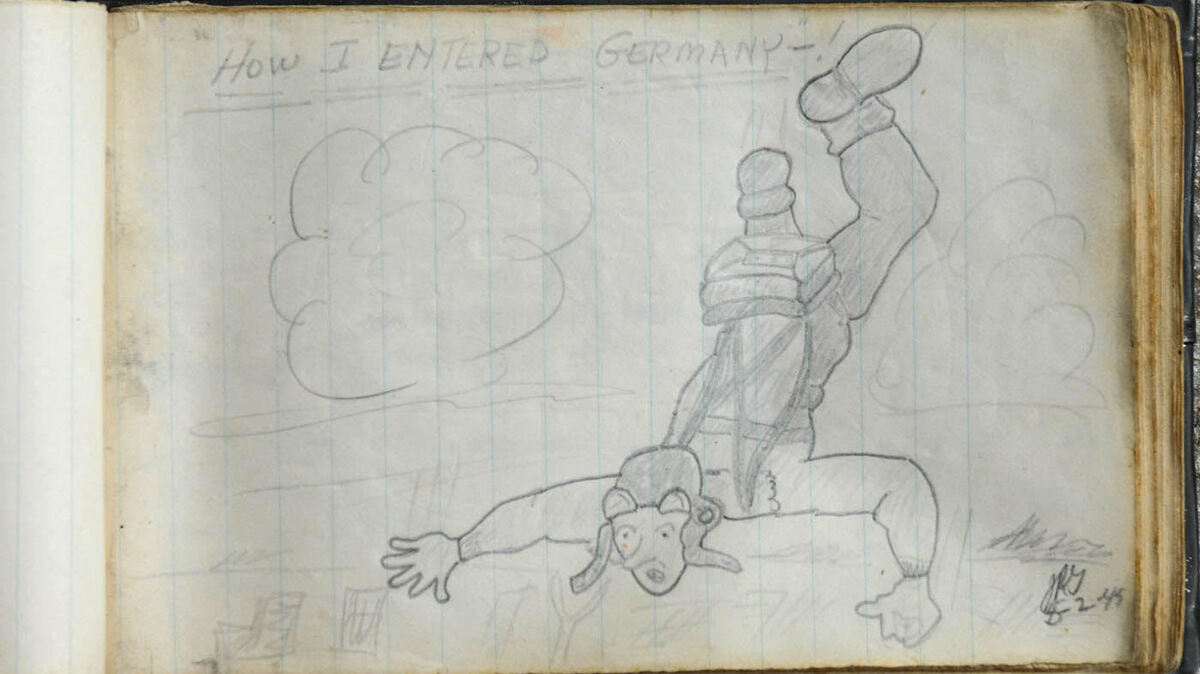 A page of Howard Weistling's comic book A Western, which he created while in a POW in Barth, Germany camp during WWII.

Back home in California, Howard soon had a wife and kids to feed so he had to set aside his dream of becoming an artist. He took a job as a gardener instead.

Morgan was the youngest of three.

"My mother always used to tell me he was a different person," Morgan says. "He was dealing with things after the prison experience and was kind of a harsh person. He was not a loving kind person back then. I ended up with the softer gentler version of him."

Morgan also shared his father's artistic gifts. As a toddler, he would crawl upon his father's knee and learn to draw. At 15 his parents sent him to art school. At 19, Morgan landed his first job drawing movie posters. One night Howard saw Morgan sketching ideas for a poster.

75th Anniversary Of D-Day: Preserving The Stories Of WWII Veterans

75th Anniversary Of D-Day: Preserving The Stories Of WWII Veterans

"And he just got tears in his eyes 'like you're doing what I always had hoped I would do,'" says Morgan. "And he was literally — I could just feel it — living through the moment like that's his way of living that dream out."

Morgan left illustration to paint. Howard got to see his son become a well-known painter before he died in 2002. That's how, seven decades after the war, when a stranger in New York googled the name "Weistling," he found Morgan online.

"I get an email from an older gentleman and he says, 'I think I may have some drawings that your father did when he was a POW in World War II," Morgan recalls. "'Would you like them?' And I just stared at that email and started crying.

The man said his business partner bought a truckload of Nazi artifacts.

"Amongst the things in this truck full of stuff were three of Hitler's watercolors, batons from Auschwitz, uniforms," Morgan says. "And this man's explaining to me, 'we're Jewish. We're Jewish. And he went and bought the worst thing he could've done so we were disgusted. But there was this one thing.'"

95-Year-Old WWII Veteran Gets Surprise Visit From An 'Old Friend': A Sherman Tank

95-Year-Old WWII Veteran Gets Surprise Visit From An 'Old Friend': A Sherman Tank

That one thing was Howard's comic book. Luckily he had engraved his name on it, which is how the man from New York City had connected with Morgan.

Still, Morgan wonders how the book wound up in that truck.

"I want to know all the hands it's passed through," Morgan says. "What happened right when the Russians came in? And how did it end up with Hitler's watercolors? It just doesn't make any sense. It's like I wish there was a Go-Pro attached to it so we could've seen the journey these drawings have gone through."

A couple of days later when it arrived by FedEx in California, he couldn't believe it.

"It was like getting my father back," Morgan Weistling says. "It was like him being able to tell me the story over again only this time it was real in my hands."