Accessibility links
'Heart Of Darkness' Adaptation Is An Artful Take On Canonical Racism Artist Peter Kuper has adapted Joseph Conrad's classic Heart of Darkness in a way that undercuts Conrad's depiction of Africa as a place of existential horror, and centers the African characters. 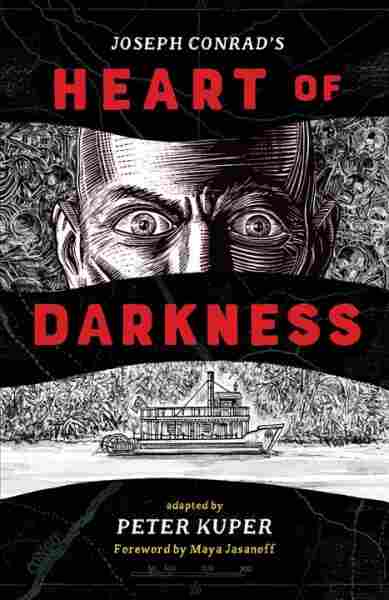 "A bloody racist." When African novelist Chinua Achebe summed up Joseph Conrad this way in 1975, it was like a bomb going off in the literary canon. Spurred by Achebe's brash assault, some critics started arguing that Conrad's works should perhaps not be read at all. These writers pointed to Conrad's imperialist tendencies, his apparent inability to see Africans as equal to Europeans and his use of the n-word. Other scholars rushed to Conrad's defense, emphasizing his anti-colonialism, his philosophical complexity and his sheer virtuosity. The result, 45 years later, is a massive and fascinating body of criticism evaluating Conrad from angles that nobody ever thought about before Achebe spoke up.

Maybe it all would have been written even if Achebe had called Conrad something other than "a bloody racist" — it's hardly the only attack he levels at him — but I don't think so. The word "bloody" gets under your skin because it's doubly significant: A swear word in British English, it also alludes to the millions of deaths for which African colonialism is culpable. As Padmini Mongia pointed out in 2001, even though Achebe later revised his essay to replace "bloody" with "thoroughgoing," "the former phrase has become an almost-as-entrenched quotation as Conrad's own 'the horror, the horror.'" But maybe that needed to happen in order to ignite and sustain a critical reappraisal of this particular author. Conrad is such a beguiling craftsman, maybe it required a particularly eloquent word-bomb to break his spell.

Peter Kuper seems to have been well aware of the power of Conrad's spell when he set out to create his graphic adaptation of Heart of Darkness. In the introduction, he describes how re-reading the novel brought back memories of traveling in South America and living for a time in Oaxaca, Mexico. Deciding that "immersion would be the best way to imbue the art with a dimension beyond lines on paper," Kuper returned to Oaxaca for several months while researching his adaptation. His commitment to capturing a sense of displacement may seem excessive, but it reflects his awareness of the most intriguing and even redeeming aspect of Heart of Darkness. The book consistently works to unsettle the reader and deny narrative comfort; it certainly doesn't instill a sense of Western self-satisfaction. Kuper aims to emphasize the unnerving aspects of the book while undermining Conrad's racism.

To do that, he has to fight against certain tendencies that dog all cartoonists: to create heroes and villains, and to boil down individuals into stereotypes. The latter is a particular problem — and one with a long and shameful history — when it comes to depicting nonwhite characters. Aware of this, Kuper looked up photos showing what people's traditional dress and facial features looked like in the Congo in the late 1800s. As a result, his African characters are far more dimensional than his Europeans. Kuper seldom misses an opportunity to make the European ivory traders look cruel, petty or stupid. It's one of the few ways he lets the art become cartoony.

Conrad's original text leaves far too much to be guessed about the African characters, but Kuper pours as much humanity into them as he can.

Kuper takes every possible opportunity to show Conrad's story from the Africans' point of view. We see the African steamboat crew's reaction upon being given their weekly "salary" of three pieces of brass wire, and villagers' terror of the colonials' firearms. Unfortunately, Conrad's original text leaves far too much to be guessed about the African characters, but Kuper pours as much humanity into them as he can.

Elsewhere, he subtly employs his art to undercut the narrator's — and Conrad's — equation of Africa with existential horror. Conrad has his narrator, Marlow, repeat ad nauseam that the African jungle is just a big, blank, philosophically significant darkness — despite the fact that millions of people make their homes there. It's arguably the most racist thing about the book. Kuper's response is to pair Conrad's dourest jungle-bashing passages with closeups of the teeming life that actually surrounds the colonists. While Marlow intones, "There was a stillness, but it did not resemble peace. It was an implacable force brooding over an inscrutable intention," Kuper crowds the page with beautifully rendered chameleons, butterflies, parrots and crocodiles.

It's tactics like this that make Kuper's work a great take on Heart of Darkness. He doesn't just retell the book. He destabilizes it, forcing a reconsideration. Most importantly, he does so with vast skill and care. Kuper seems to understand the same thing Achebe did, when the latter used that potent combination of words to blast open Conrad criticism back in 1975: To take on art, you have to be artful.