Accessibility links
Remembering The 1st Veterans Memorialized By Veterans Day Many Americans may have forgotten that Veterans Day began as a commemoration of World War I veterans. NPR's Kathleen Rushlow remembers her grandfather, who served in the 12th Machine Gun Battalion. 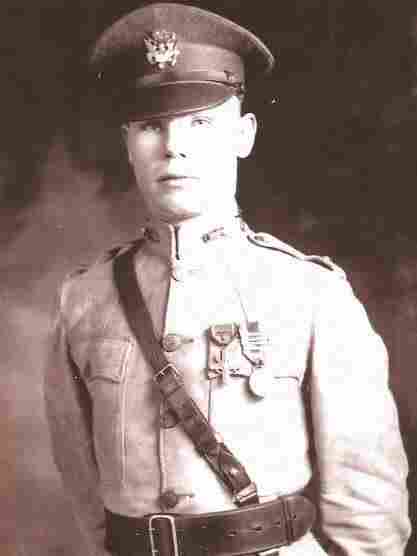 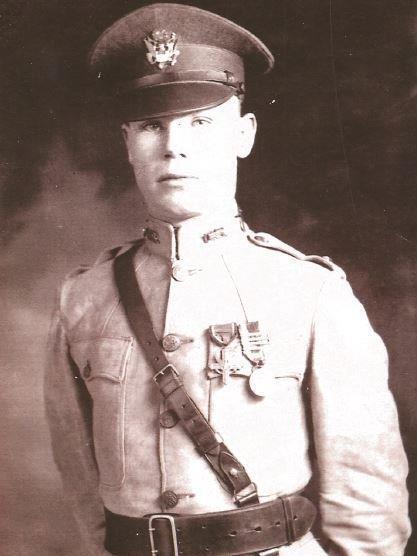 Sgt. Charles Kelley was honored with the Distinguished Service Cross in World War I.

In the United Kingdom, Veterans Day is celebrated with red paper poppies pinned to lapels in remembrance of those who served in World War I. The practice caught on after the bloody battlefields of France bloomed with red poppies following the war. Every year, British people wear these red flower pins for about a month leading up to Nov. 11, and buying one of these paper flowers funds veterans groups. The U.K. memorializes the end of World War I with purpose and style.

Veterans Day began as a commemoration of World War I, that 11th hour of the 11th day of the 11th month in 1918 when the guns were silenced and the armistice was called and peace came at last. After four long years of fighting in the "war to end all wars," the dead numbered an estimated 9 million troops. Nearly 120,000 were Americans.

Nov. 11 was originally Armistice Day in the United States, though it wasn't ratified by Congress until 1938. By the mid-1950s veterans groups urged Congress to change the day to honor Americans who had served in all wars, removing the distinctive honor for those who served in World War I.

Looking Back On The 100th Anniversary Of The WWI Armistice

Looking Back On The 100th Anniversary Of The WWI Armistice

So here we are now, 101 years after the Armistice of 1918, and many Americans have all but forgotten World War I. Americans reenact the Civil War, salute the remaining veterans of World War II with Honor Flights to the monuments and Arlington National Cemetery and for years have remembered Vietnam War vets with Rolling Thunder on Memorial Day. (That holiday honors all war dead.) But where are the World War I remembrance ceremonies on this important day that ushered in the many wars of the last century?

The nation's capital has a tremendous World War II Memorial, a moving Korean War Memorial and an iconic Vietnam War Memorial. The only World War I memorial in the city is a small stone gazebo, dedicated to those who served from Washington, D.C. A new national World War I memorial is planned near the White House, but it's now more than 100 years since the guns were silenced. It's too late for those troops. They're long gone and mostly faded from our collective memory. But here's the story of one of them.

Sgt. Charles Kelley, Company C of the 12th Machine Gun Battalion, joined Gen. Pershing's American Expeditionary Forces in France in late summer of 1918. He was 18 years old. During the Meuse-Argonne offensive, which began in September 1918, Kelley, according to Pentagon records, "led his platoon in the attack with great bravery against strongly held enemy trenches. Shortly after reaching his objective he was wounded in the throat. He refused to be evacuated, but continued to actively command his men until the night of Oct. 1, by which time, due to his wound, he had lost the power of speech."

The Meuse-Argonne offensive was the single bloodiest battle in American history with more than 26,000 Americans killed. For his heroism, Sgt. Kelley was honored with the Distinguished Service Cross, second only to the Medal of Honor. My family has worked to get him upgraded to a posthumous Medal of Honor for his courage and bravery, but the Army says too much time has passed. There are no more eyewitnesses. It's true. We — his family — had never realized his heroism while he was alive. We never realized what the initials DSC meant on his gravestone at Arlington National Cemetery. It was only a few years ago that we looked up his records to see what he'd done to earn this high honor.

But now, we salute our grandfather. We honor him and all those of that generation who courageously took on a fight that cost the lives of so many and ultimately did nothing to end or prevent war.

Today I am wearing a red paper poppy on my lapel in the memory of the tens of thousands of Americans, as well as the millions worldwide killed in a war that ended 101 years ago, but has all but been forgotten by Americans.

Kathleen Kelley Rushlow is a senior producer of newscasts at NPR.