Accessibility links
Nikki Haley, Former U.N. Ambassador, Tells NPR Trump's Actions Not Impeachable In an interview with NPR about her new book, former U.N. Ambassador Nikki Haley said she made an effort to avoid "toxic" and "trashy" Washington — and that she'll campaign for Trump in 2020. 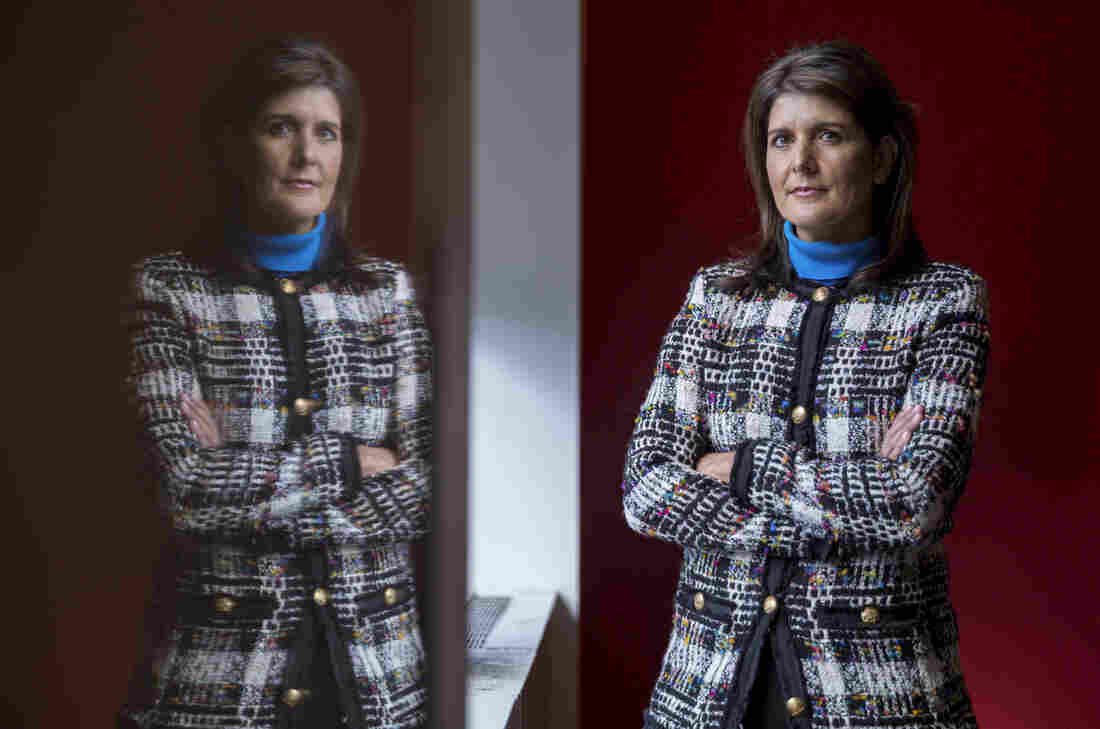 In an interview with NPR about her new book, former Ambassador to the U.N. Nikki Haley said she made an effort to avoid "toxic" and "trashy" Washington — and that she'll campaign for President Trump in 2020. Above, she poses for a portrait at NPR studios in New York City on Nov. 8. Amr Alfiky for NPR hide caption 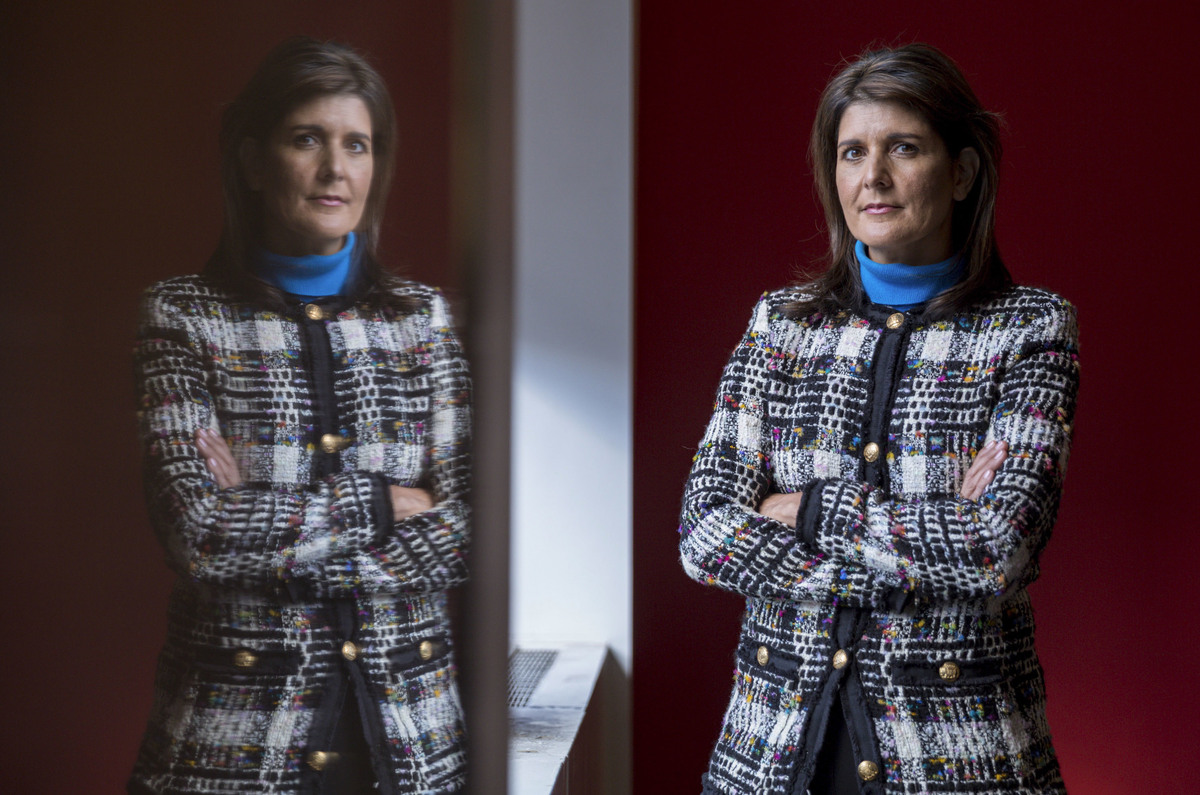 In an interview with NPR about her new book, former Ambassador to the U.N. Nikki Haley said she made an effort to avoid "toxic" and "trashy" Washington — and that she'll campaign for President Trump in 2020. Above, she poses for a portrait at NPR studios in New York City on Nov. 8.

A onetime member of the Trump administration has some mildly critical words for her old boss but disagrees with Congress' efforts to impeach him.

Former Ambassador to the U.N. Nikki Haley said in an interview with NPR on Friday that "it is not a good practice for us ever to ask a foreign country to investigate an American" — referring to President Trump's efforts to get Ukraine to investigate former Vice President Joe Biden, his potential 2020 opponent.

But, she added, "I don't see it as impeachable."

Haley, who served from 2017 to 2018, has written a book about her time as ambassador — With All Due Respect: Defending America With Grit and Grace.

In the interview, she said it's "arrogant" of Congress to attempt to impeach Trump before an election year. "Did the Ukrainians call for an investigation? No," Haley said. "Did the president hold up aid? He released it as he should," she said. And so, in her view, there was no "smoking gun."

"The American people should decide what they think is right and wrong. For Congress or [House Speaker Nancy] Pelosi and [Senate Minority Leader Chuck] Schumer to sit there and say they are going to decide this for the American people is just wrong."

Haley criticized the anonymous author of the upcoming book A Warning, set to go on sale Nov. 19, which purports to be an insider's account of the White House and outlines an alleged effort to replace Trump under the 25th Amendment with Vice President Pence. 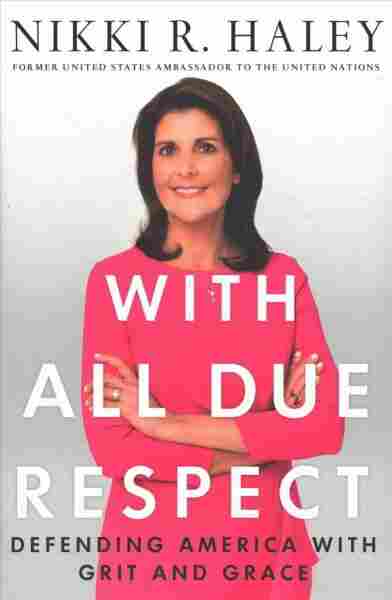 Haley called the author "cowardly" and said she was never in a conversation "that even whispered anything about the 25th Amendment." She said she witnessed "multiple conversations and debates in front of the president," adding that "at the end of the day, the president decides, and if he does and you can't live with it, then quit."

What's more, Haley said, "there is no way that anyone believes that Mike Pence ever considered" replacing the president.

Not to say there wasn't plenty of backroom intrigue at the White House. Haley said there were people within the Trump administration "who tried to undermine the president," citing then-Secretary of State Rex Tillerson and then-White House Chief of Staff John Kelly, in particular. Haley said they "tried to recruit me and said they were trying to save the country and that if they did not do something, people would die."

But Haley said it wasn't that they were worried about "a rogue president that was out of control," but rather policy differences they had with Trump, including withdrawing from the Paris climate agreement and the Iran nuclear deal and moving the U.S. Embassy in Israel from Tel Aviv to Jerusalem.

NPR reached out to Kelly, who declined to comment.

Haley said the embassy move was "one where they said the sky would fall." But, as Haley noted, the embassy was moved and "the sky is still up there."

And Haley, who said she "loved every second" of being ambassador to the U.N., doesn't hide her disdain for Washington. She said that when she would visit the White House, "I couldn't get back to New York fast enough, "because it [Washington] was toxic, it was political and it was trashy."

Haley said she left her U.N. post because after two years there and the preceding six as governor of South Carolina (she was the state's first female governor and its first Indian-American one) she was tired of "going nonstop, 24/7 for eight years" and was anxious to spend more time with her family.

"@NikkiHaley is out with a new book, 'With All Due Respect' this week. Make sure you order your copy today, or stop by one of her book tour stops to get a copy and say hello. Good luck Nikki!"

Haley said she will be campaigning for Trump's reelection in 2020 and has no political plans beyond that. But she quickly added: "I'm too young to stop fighting." And while she's not running for anything now, she plans on taking it "a year at a time."