Accessibility links
Supreme Court Allows Sandy Hook Families' Case Against Remington Arms To Proceed The gun-maker had appealed to the highest federal court after the Connecticut Supreme Court allowed the lawsuit over the 2012 school massacre in Newtown, Conn., to go forward in March. 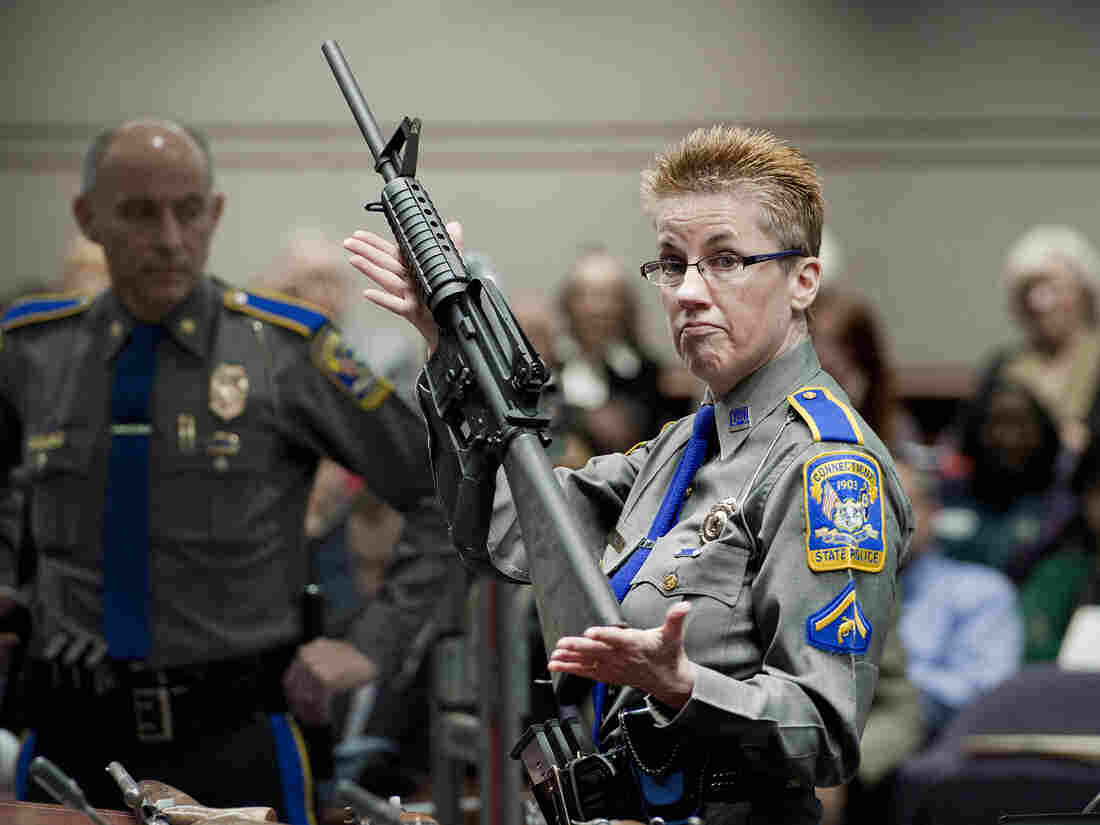 Connecticut State Police Detective Barbara J. Mattson holds a Bushmaster AR-15-style rifle, the same type of gun used in the Sandy Hook shooting, during a 2013 hearing in Hartford, Conn. The gun-maker Remington is being sued by the families of the victims. Jessica Hill/AP hide caption 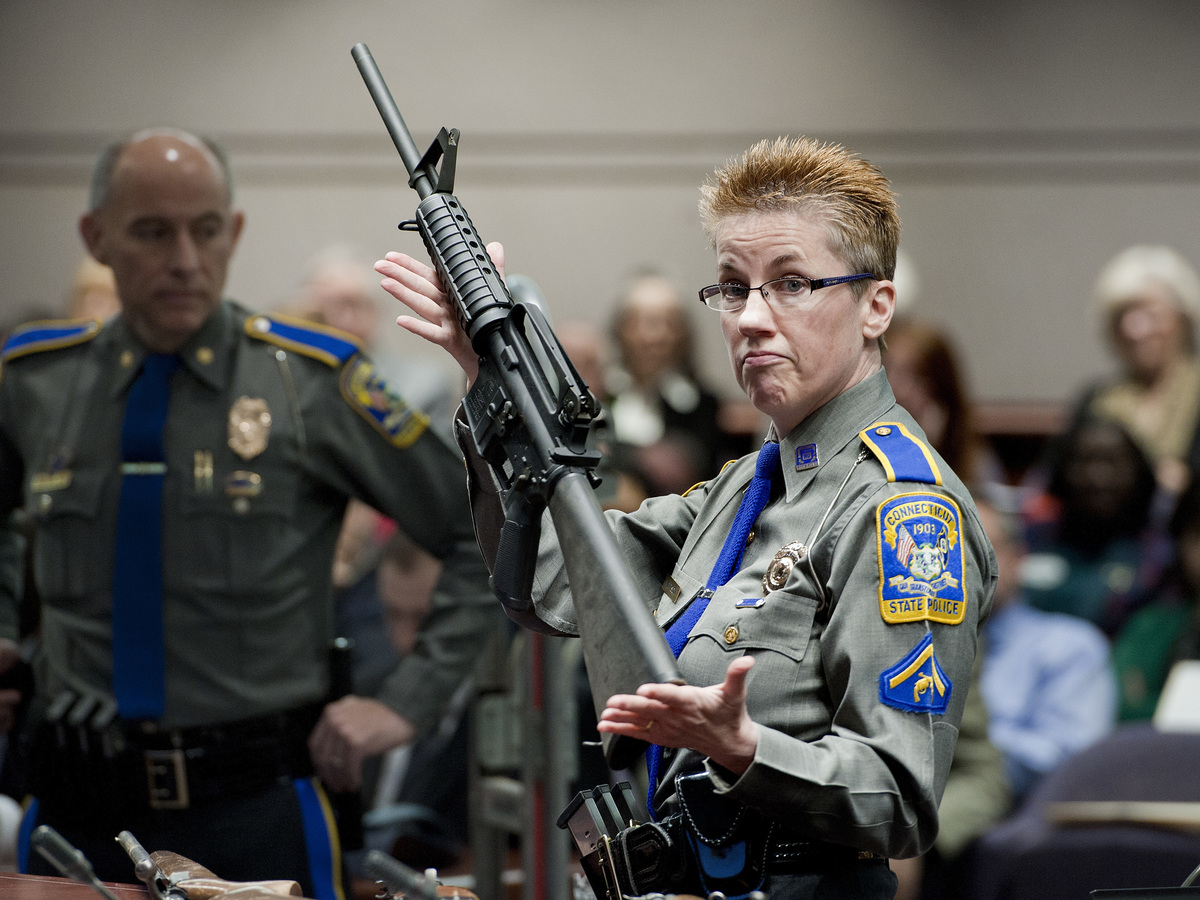 Connecticut State Police Detective Barbara J. Mattson holds a Bushmaster AR-15-style rifle, the same type of gun used in the Sandy Hook shooting, during a 2013 hearing in Hartford, Conn. The gun-maker Remington is being sued by the families of the victims.

The Supreme Court has denied Remington Arms Co.'s bid to block a lawsuit filed by families of victims of the Sandy Hook school massacre. The families say Remington should be held liable, as the maker and promoter of the AR-15-style rifle used in the 2012 killings.

The court opted not to hear the gun-maker's appeal, in a decision that was announced Tuesday morning. The justices did not include any comment about the case, Remington Arms Co. v. Soto, as they turned it away.

Remington had appealed to the highest federal court after the Connecticut Supreme Court allowed the Sandy Hook lawsuit to proceed in March. In recent court filings, Remington says the case "presents a nationally important question" about U.S. gun laws — namely, how to interpret the 2005 Protection of Lawful Commerce in Arms Act, which grants broad immunity to gun-makers and dealers from prosecution over crimes committed with their products.

Remington manufactured the Bushmaster AR-15-style rifle that Adam Lanza used on Dec. 14, 2012, to kill 20 first-graders and six adults at the elementary school in Newtown, Conn.

The families first filed their lawsuit in December 2014, saying the Bushmaster rifle never should have been sold to the public because it is a military-style weapon. They accuse Remington of violating Connecticut's unfair trade practices law when it "knowingly marketed and promoted the Bushmaster XM15-E2S rifle for use in assaults against human beings."

The closely watched lawsuit has survived many legal twists and turns, moving from state to federal court and back, and repeatedly escaping bids by Remington and gun owners' groups to quash it. While the suit initially centered on a claim of negligent entrustment — or providing a gun to someone who plans to commit a crime with it — the case now hinges on how Remington marketed the gun.

The 2005 federal law that shields gun companies from liability has several exceptions — including one allowing lawsuits against a gun-maker or seller that knowingly violates state or federal laws governing how a product is sold or marketed.

In March, the Connecticut Supreme Court breathed new life into the families' lawsuit when it ruled they can sue Remington for marketing a military-style weapon to civilians. That decision reversed a Connecticut superior court's ruling that would have ended the case.

Now that the U.S. Supreme Court has declined to take up Remington's appeal, the case will return to a lower court in Connecticut.

One of the plaintiffs in the case is David Wheeler, whose 6-year-old son, Ben, was killed in the Sandy Hook shooting. Wheeler told NPR earlier this year that to him, the lawsuit is about responsibility. And he recalled one of Remington's ads for a gun that carried the tagline, "Consider your man card reissued."

"What kind of society allows manhood to be defined in this way?" Wheeler asked.

The AR-15 is a close relative of the Colt company's M16 automatic rifle used by the U.S. military. Since Colt's patents for the original AR-15 expired in the 1970s, other manufacturers have been making guns based on similar designs.

In filings with the U.S. Supreme Court, the Sandy Hook families say Remington "published promotional materials that promised 'military-proven performance' for a 'mission-adaptable' shooter in need of the 'ultimate combat weapons system.' " They also accuse the company of fostering a "lone gunman" narrative as it promoted the Bushmaster, citing an ad that proclaimed, "Forces of opposition, bow down. You are single-handedly outnumbered."

Parents who lost their children on that horrible day have said it was no accident that Lanza picked the AR-15-style rifle to carry out his shooting rampage.

In 2016, Nicole Hockley, whose son Dylan was killed in the attack on his elementary school, said the gunman chose an AR-15-style gun "because he knew it would kill as many people as possible as fast as possible."