Accessibility links
McDonald's Sued Over 'Systemic Sexual Harassment' Of Female Workers A former employee has filed a class-action lawsuit against McDonald's and one Michigan franchise, alleging a "culture of sexual harassment." 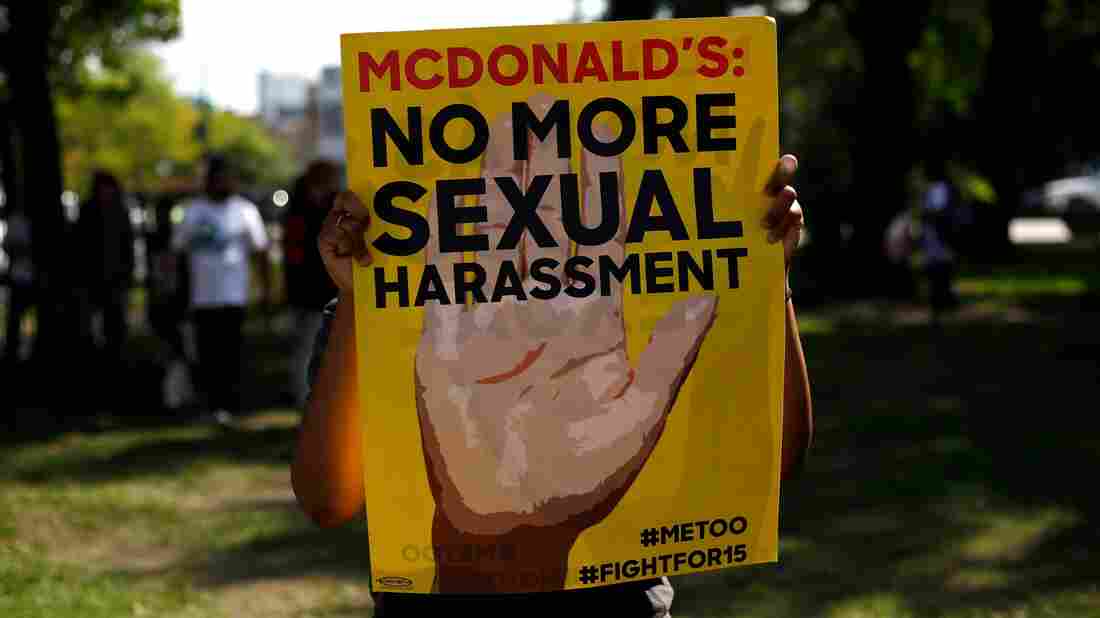 A McDonald's employee holds a sign during a 2018 protest against sexual harassment in the workplace in Chicago. Joshua Lott/AFP via Getty Images hide caption A McDonald's employee holds a sign during a 2018 protest against sexual harassment in the workplace in Chicago.

A former McDonald's employee says a male co-worker at a Michigan restaurant routinely grabbed her breasts and buttocks and propositioned her for sex — allegations laid out in a new class-action lawsuit that accuses McDonald's of a "culture of sexual harassment."

The lawsuit against McDonald's and its Michigan franchise is the latest allegation of rampant abuse and harassment of female employees at the fast-food chain. Lawyers representing workers say more than 50 claims and charges of harassment of female employees are pending against McDonald's in courts and at the Equal Employment Opportunity Commission.

Their accusations drew new focus last week when McDonald's fired its CEO, Steve Easterbrook, over a consensual relationship with an employee. He is not accused of sexual harassment, but the relationship violated company policy. Still, Easterbrook is receiving a multi-million-dollar exit package.

Tuesday's lawsuit by former McDonald's employee Jenna Ries points to Easterbrook's firing to allege that McDonald's as a corporation "creates and permits a toxic work culture from the very top."

In the lawsuit, Ries says a store manager repeatedly harassed her, called her names, pulled her hair, and at one point, when they were working next to each other in the kitchen, even "placed his penis" in her hand. According to the filing, Ries witnessed similar harassment of other women and girls, and reported the co-worker to the general manager — but the behavior continued.

More than 50 women who have worked at the Michigan franchise could join her class-action suit if it's recognized, according to the filing. The lawsuit seeks $5 million in damages for workers at the Mason, Mich., location.

The vast majority of McDonald's restaurants are owned by franchisees. But the lawsuit says the corporation, too, has failed to address the "systemic sexual harassment" and therefore enabled it.

Protests Over Sexual Harassment At McDonald's Grow As Shareholders Meet

"This is not just about me," Ries told reporters on Tuesday. "This is about countless McDonald's workers around the country who have survived sexual harassment on the job. We deserve to feel safe at work."

McDonald's, in a statement, said it was "demonstrating its continued commitment" to the issue by adding a new anti-harassment training program to all corporate-owned restaurants. It also said it was "encouraged" by the progress getting franchisees to implement the training.

"There is a deeply important conversation around safe and respectful workplaces in communities throughout the U.S. and around the world, and McDonald's is demonstrating its continued commitment to this issue," McDonald's said in the statement.

In May, McDonald's workers across the U.S. staged protests against low pay and the company's handling of alleged sexual harassment. That's when workers filed numerous complaints against McDonald's, with the backing of the Time's Up Legal Defense Fund, the American Civil Liberties Union and the labor group Fight for $15.

The groups say they expected hundreds of workers in Michigan to join a new strike on Tuesday.