Accessibility links
Arctic Blast Grips Parts Of The U.S., With Snow And Record-Breaking Cold Forecasters say an estimated 300 cold-weather records are expected to be tied or broken through Wednesday. The "arctic outbreak" is being blamed for four deaths so far.

Arctic Blast Grips Parts Of The U.S., With Snow And Record-Breaking Cold

Arctic Blast Grips Parts Of The U.S., With Snow And Record-Breaking Cold 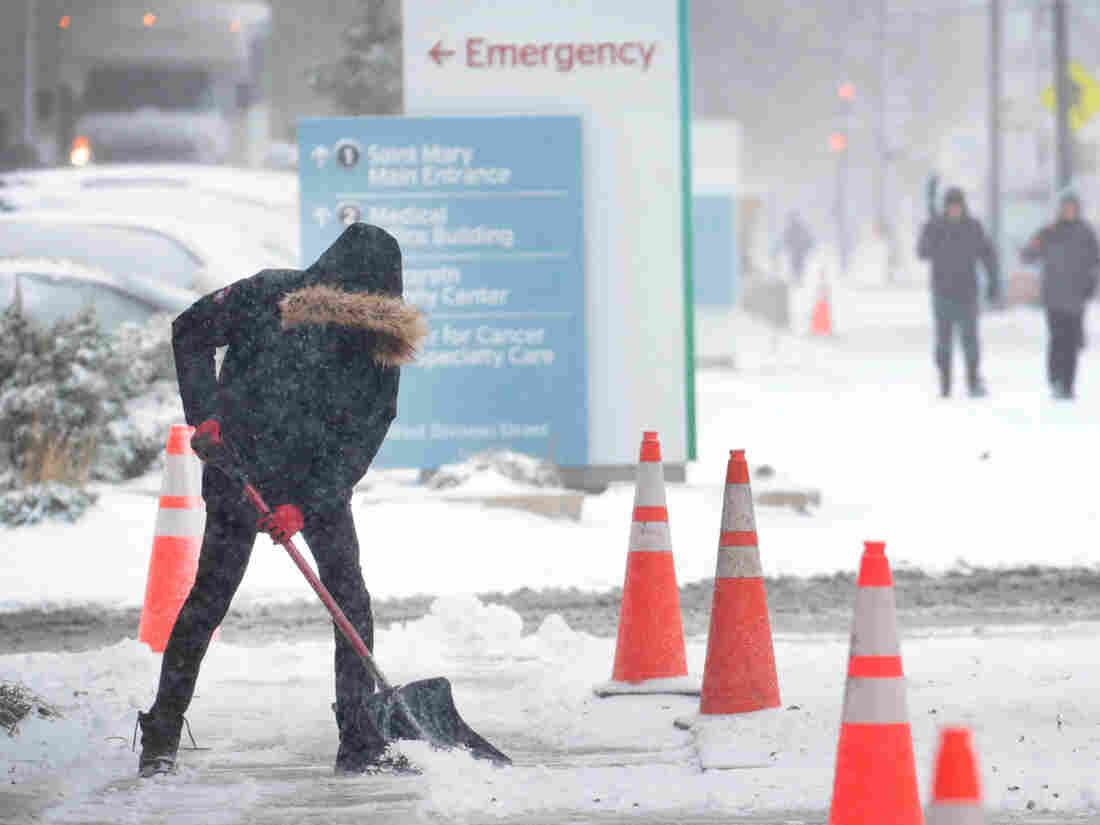 A worker shovels snow from a sidewalk in the Humboldt Park neighborhood of Chicago. Forecasters expect temperatures to drop around 10 degrees by Wednesday. Scott Olson/Getty Images hide caption 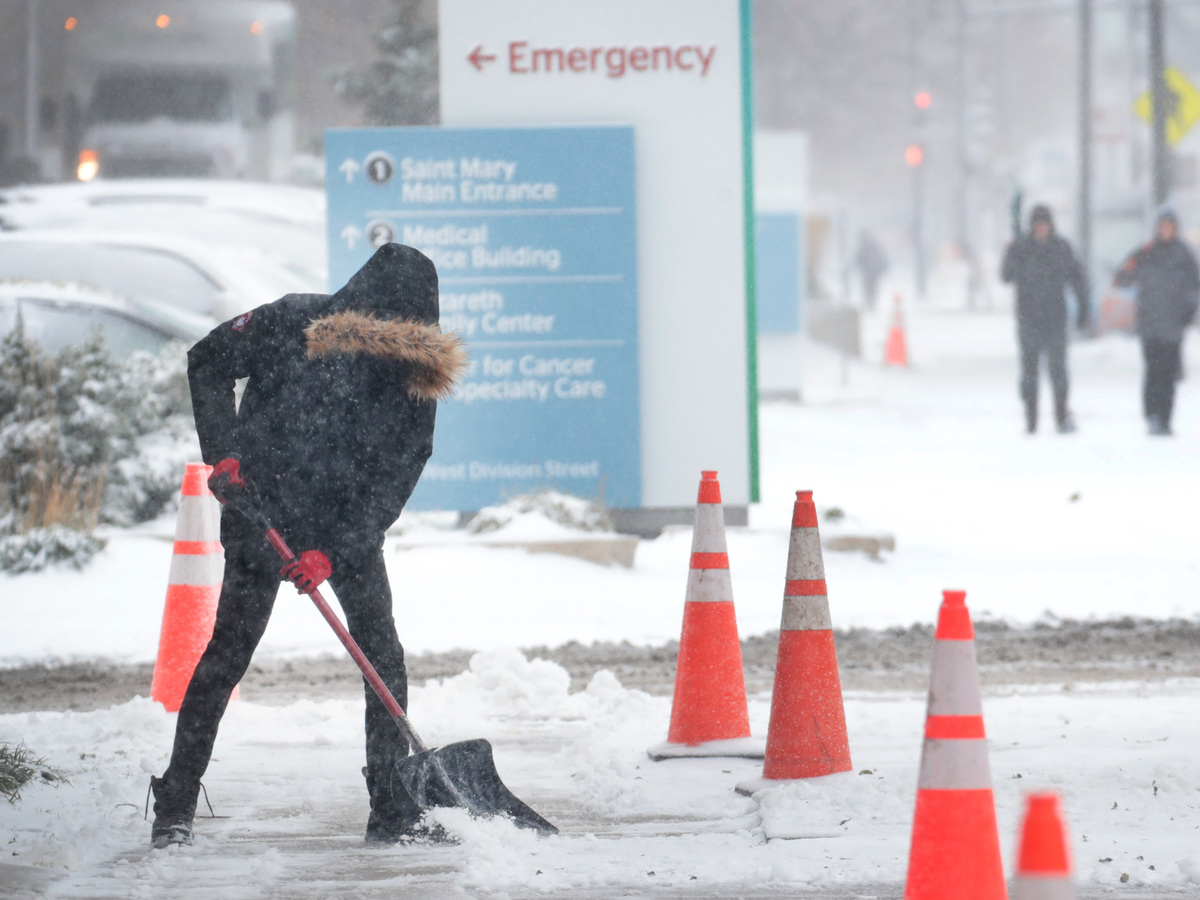 A worker shovels snow from a sidewalk in the Humboldt Park neighborhood of Chicago. Forecasters expect temperatures to drop around 10 degrees by Wednesday.

Record-breaking cold and snowfall is numbing many parts of the U.S. from the Great Plains to the East Coast and north through New England. By Wednesday the cold snap is expected to spread farther south to the upper Texas coast in what is being described as an "arctic outbreak" by the National Weather Service.

The dead-of-winter temperatures come with roughly five weeks of fall remaining on the calendar.

"The arctic airmass that has settled into the Plains will continue to spread record cold temperatures south and eastward into the Ohio Valley and down into the southern Plains," according to the National Weather Service.

It adds: "Low temperatures in the teens and 20s will be common along much of the East Coast, the Ohio Valley, and down as far south as the upper Texas coast, making it feel like the middle of winter for these areas."

An estimated 300 cold-weather records are expected to be tied or broken by Wednesday. The National Oceanic and Atmospheric Administration estimates 30% of the continental U.S. is covered by snow.

An estimated 300 records are expected to be broken/tied for the upcoming cold between Monday and Wednesday. pic.twitter.com/SrtzWuzP2f

Even Texas, where weather is typically mild this time of year, saw temperatures drop nearly 40 degrees in a 24-hour period between Monday morning and Tuesday morning.

According to an NWS tweet, temperatures in the Texas cities of Galveston, Sugar Land and College Station dropped by 31 degrees, 33 degrees and 37 degrees, respectively.

Forecasters say a "freeze and hard freeze warnings" are in effect from the Texas coast to coastal South Carolina, with temperatures beginning to gradually rise by Thursday.

A massive storm dumped nearly a foot of snow at the Buffalo, N.Y., airport, according to NWS, as of Tuesday afternoon.

The Buffalo News called the storm "record-shattering," saying it broke a Nov. 11 snowfall total that had stood for the city for 77 years. The paper writes: "Monday's snow totaled 8.7 inches, well above the old record of 5.3 set on Nov. 11, 1942. The record was actually surpassed before 9 p.m., when the snowfall hit 5.9 inches, but it kept coming down overnight."

In the Chicago area, a storm being dubbed "snowvembruary" set single-day snowfall records for Nov. 11 at Chicago's O'Hare airport (3.4 inches) and in Rockford, Ill., (3.2 inches).

A day after an American Eagle flight slid off the runway at O'Hare Airport during a storm, the Chicago Tribune reports conditions at both O'Hare and Midway international airports "improved slightly" after thousands of flights were delayed or canceled because of the weather.

None of the crew members or passengers on the flight were injured.

"One hundred flights had been canceled at O'Hare and another 729 were delayed. At Midway, five flights were canceled and 89 were delayed," the Tribune reports.

The weather is also being blamed for deaths.

Icy conditions in Kansas were said to have caused the death of an 8-year-old girl in a three-vehicle crash in Osage County, southwest of Kansas City on Monday, according to the Kansas Highway Patrol.

In the Lansing, Mich., area, the Eaton County Sheriff's Office posted on Facebook on Monday that deputies responded to a two-vehicle crash.

"Upon arrival, deputies discovered that all three occupants in one vehicle were deceased. There was one male, age 57, and two females, ages 64 and 81 in this vehicle that died in the crash," the sheriff's office reported.

Meanwhile for the West, NWS predicts "persistent warm and dry weather" which it says elevate concerns for fire weather, particularly in Southern California.

An earlier version of this story mistakenly said temperatures in the Texas cities of Galveston, Sugar Land and College Station dropped by 31%, 33% and 37%, respectively. The temperatures actually dropped 31 degrees, 33 degrees and 37 degrees, respectively. Also, an earlier version mistakenly said Texas saw temperatures drop nearly 40% in a 24-hour period between Monday morning and Tuesday morning. The drop was actually nearly 40 degrees.