Accessibility links
In Impeachment Hearing, Taylor Says Trump Asked About Ukraine 'Investigations' The State Department staffer who overheard a newly revealed phone call was then told the president cared more about looking into the Bidens than Ukraine policy, the House committee learned. 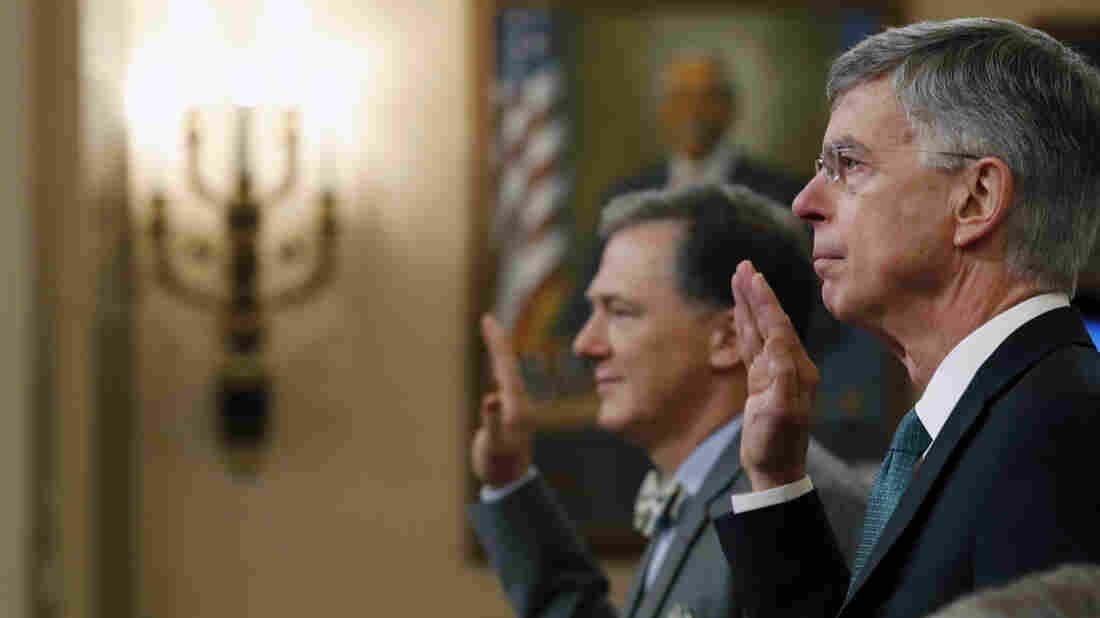 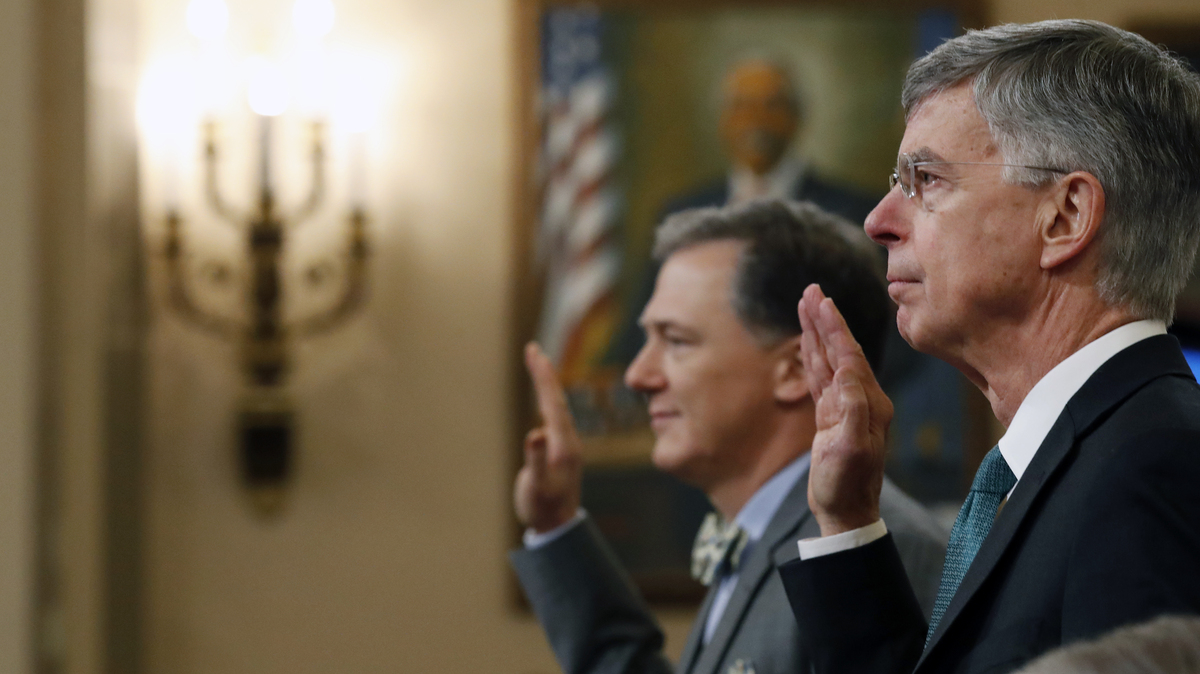 Top U.S. diplomat to Ukraine William Taylor (right) and Deputy Assistant Secretary for European and Eurasian Affairs George Kent are sworn in to testify before the House Intelligence Committee on Wednesday.

A State Department staffer overheard President Trump asking a top diplomat about "investigations" he wanted Ukraine to pursue that he believed might help him in the 2020 election, another senior diplomat told Congress.

That staffer is expected to tell his story directly to House investigators at a closed-door deposition on Friday.

The new subplot about the overheard phone conversation was one of a small number of new details to emerge from Democrats' first open hearing in their impeachment inquiry into Trump on Wednesday.

Mostly, the five-hour hearing emphasized aspects of the narrative about the Ukraine affair that already have emerged from closed depositions.

Republicans used their portions of the hearing to underscore what they called the witnesses' indirect knowledge of the Ukraine affair and, more broadly, to defend Trump's actions.

William Taylor, the acting boss of the U.S. diplomatic mission in the Ukrainian capital of Kyiv, added the detail about the overheard conversation to earlier testimony he gave House investigators.

Taylor said a diplomatic staffer told him about being with Gordon Sondland, the ambassador to the European Union, when Sondland called Trump.

The staffer "could hear President Trump on the phone, asking Ambassador Sondland about 'the investigations,' " Taylor said.

Trump's personal attorney Rudy Giuliani had sought to have Ukraine look into the actions of former Vice President Joe Biden and his son Hunter.

An attorney for Sondland declined to comment on Taylor's testimony, saying that the ambassador would tell his own story to Congress when he appears Nov. 20. Trump said Wednesday that he didn't know anything about it.

Investigators also said Wednesday that they've scheduled closed-door depositions for later this week with two more witnesses: David Holmes of the State Department and Mark Sandy, an official from the Office of Management and Budget.

Holmes, according to congressional sources, is the State Department aide who overheard Trump.

In exchange for investigations, witnesses have said, Trump was prepared to meet in person with his Ukrainian counterpart, Volodymyr Zelenskiy and to sustain financial assistance — appropriated by Congress — that Washington had been providing to Ukraine since it was invaded by Russia in 2014.

Who Are The Staff Attorneys Questioning Impeachment Witnesses?

The White House froze Ukraine's aid for a period of weeks this year and then released it. Although Zelenskiy was close to booking a CNN interview in September, he never made the public commitment that witnesses have said Trump wanted.

Republicans argue this shows there was no inappropriate exchange and say the impeachment process has been a "sham." Trump himself repeated that line again on Wednesday.

"It shouldn't be allowed," Trump said during a press conference at the White House.

Trump also was asked specifically about Taylor's account of the diplomatic staffer who was said to have overheard the president's phone call with Sondland.

"I know nothing about that. First time I heard that," Trump said.

The president's defenders in Congress also said the impeachment case is invalid because it's based on hearsay. Few witnesses heard directly from Trump and — for some supporters — Trump's actions were legitimate or, at the very least, not impeachable.

'Irregular But Not Outlandish'

"This spectacle is doing great damage to our country," he said. "It's nothing more than an impeachment process in search of a crime."

Dems: Congress has no choice but to act

No, Democrats argue. They say that Trump has so abused his office that Congress has no choice but to reach for one of its rarest and most serious remedies — impeachment.

If Congress does not act, "the prospects for further corruption and abuse in this administration or any other will be exponentially increased," said Intelligence Committee Chairman Adam Schiff, D-Calif. "If this is not impeachable conduct, what is?"

Schiff's members are further frustrated by what they call a lack of cooperation from the Trump administration, which has sought to block many witnesses and withhold many documents.

"We have not received one piece of paper from the State Department relative to this investigation," said Rep. Jackie Speier of California.

Democrats have said Trump's unwillingness to cooperate could become its own article of impeachment, one related to what they call obstruction of Congress.

The process is moving on, however. Democrats have scheduled another public hearing for Friday with former U.S. Ambassador to Ukraine Maria Yovanovitch and three more hearings next week with a variety of witnesses.

For Wednesday's hearing, Schiff called Taylor and Deputy Assistant Secretary of State George Kent to tell their stories. They had already spoken to investigators in closed depositions and repeated much of their stories on Wednesday.

Kent is the senior State Department supervisor whose responsibility includes policy for Eastern Europe, but he says he was told to "keep his head down" and "keep a low profile" on Ukraine because the White House had hand picked "three amigos" to take that portfolio.

Kent also told lawmakers on Wednesday that he raised concerns during the administration of President Barack Obama about the appearance of conflict raised when the son of then-Vice President Joe Biden was hired to join the board of Burisma, a Ukrainian gas company.

But Kent also said he never saw any evidence that Biden leaned on Ukrainian officials not to investigate the company in a way that might have been improper.

Impeachment Hearing FAQ: Who Will Testify And How The Questioning Will Work

Republican counsel Steve Castor asked the witnesses whether Biden's son Hunter had any expertise in Ukrainian energy issues or spoke Ukrainian or had any other training that might have qualified him for the role he took.

"Do you know whether he possessed any other element — other than being the son of, at the time, the sitting vice president?" Castor asked.

Trump has cited what he calls "corruption" involving the Bidens as the reason he says it's appropriate that he tried to get Zelenskiy to investigate them. Castor also asked the witnesses to describe earlier instances of alleged corruption in Ukraine to build a foundation for that case.

Taylor is the acting boss of the U.S. diplomatic mission in the Ukrainian capital, Kyiv. He told investigators that he learned about Trump's desire for investigations from other diplomats and couldn't explain to Ukrainians why their military assistance had been withheld.

Kent and Taylor said they wanted to be nonpartisan "fact witnesses" but also acknowledged that they opposed Trump's pressure policy, in part because it was run by Trump's personal lawyer Rudy Giuliani — not someone within the foreign policy establishment — and in part because they thought it was bad on its merits.

Republican lawmakers emphasized that neither Taylor nor Kent — nor others from whom Congress has heard — spoke directly with Trump and can describe his intentions.

Moreover, corruption is endemic in Ukraine and that is a solid basis upon which the White House should act, Republicans argued in a policy memo circulated on Tuesday.

Another defense is that Trump's invitation for foreign interference in the 2020 race might have been inappropriate, as Ohio Republican Sen. Rob Portman argued, but it isn't impeachable.

Democrats, meanwhile, rejected the idea that Trump didn't do anything wrong simply because he didn't succeed in getting the concessions he wanted from Zelenskiy.

Rep. Joaquin Castro, D-Texas, said the law recognizes the principle that a transgression interrupted may be as much a crime as much as one committed.

But another Texan, Republican Rep. John Ratcliffe, said he believes nothing that has been developed in the investigation so far reveals anything improper. He made that point to the witnesses in a rhetorical question late into the hearing.

"Do you agree with me that we shouldn't impeach a president for exercising his constitutional authority?"