Accessibility links
The Mainstreaming Of EDM And The Precipitous Drop That Followed The culture of electronic dance music has long been seen as a safe space for the marginalized, but over the past decade it took a sharp turn towards the mainstream.

The Mainstreaming Of EDM And The Precipitous Drop That Followed

The Mainstreaming Of EDM And The Precipitous Drop That Followed 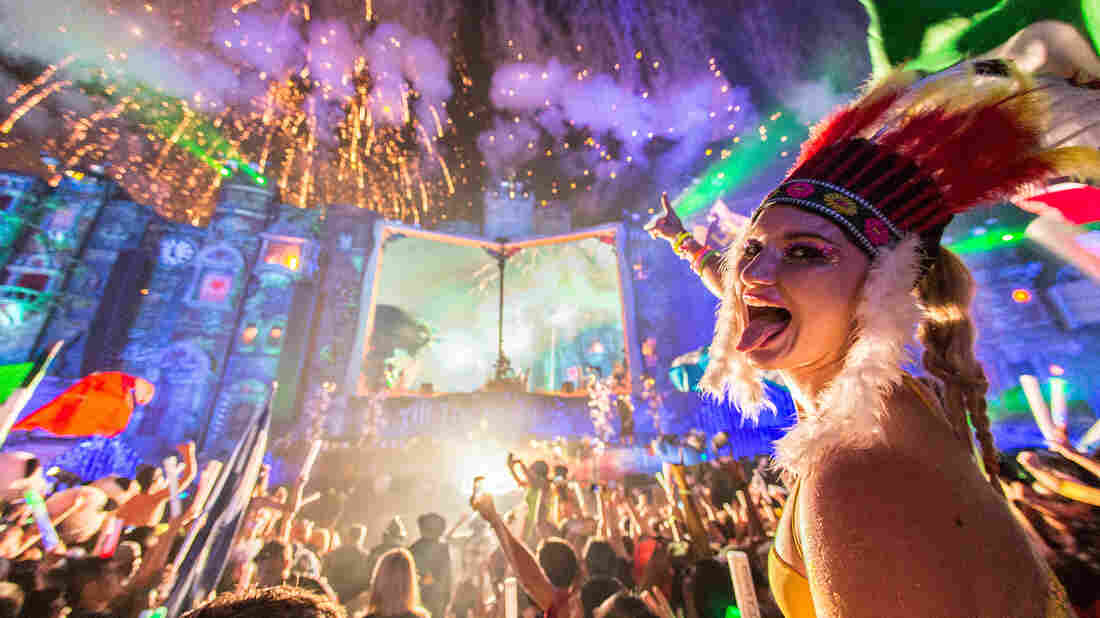 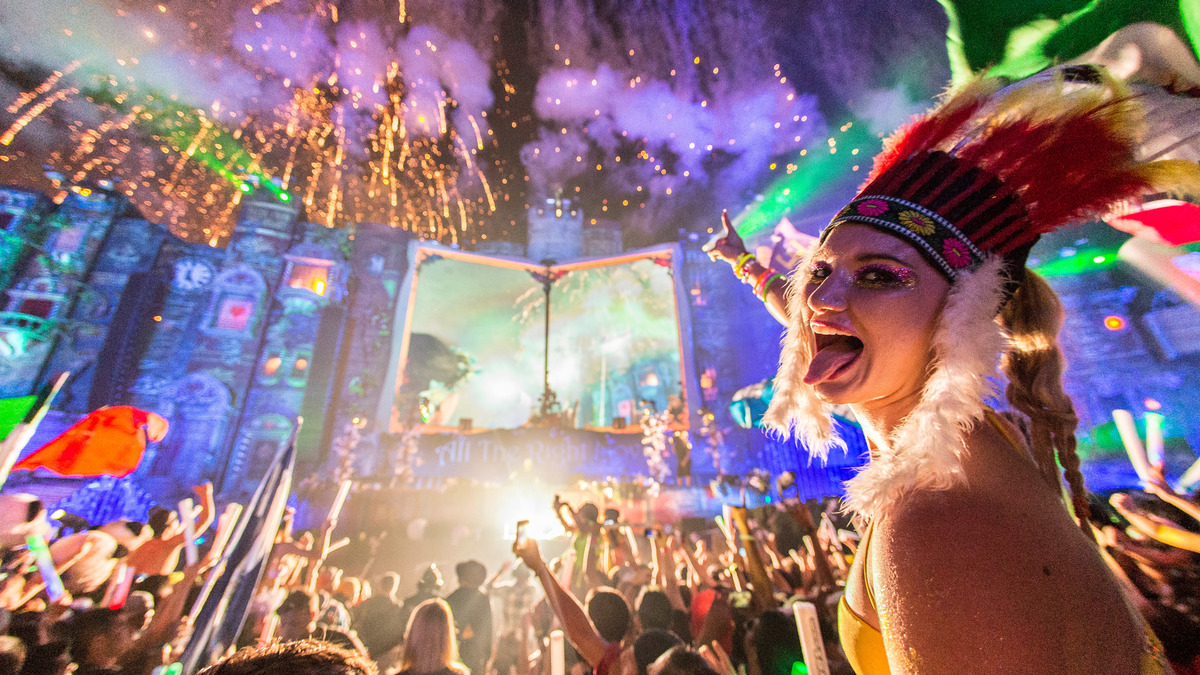 An attendee during the TomorrowWorld Electronic Music Festival on September 29, 2013 in Chattahoochee Hills, Georgia.

So when did EDM — the U.S. record-biz term for electronic dance music's early-2010s commercial surge through Avicii, Deadmau5, Skrillex and a number of new festivals — "die," anyway? At the height of its powers, naturally.

By 2015, EDM's global value was estimated at around $6.9 billion. But the moment its demise began to feel like a hard fact was that August 6 of that year, when Britt Julious's "Lollapalooza Confirms It: EDM Is Over" ran on the Chicago magazine website.

"EDM eventually concentrated in festivals rather than raves, fueling its emphasis on culture and atmosphere over music," Julious wrote, noting that the Lollapalooza dance stage was moving toward the smoother, less boisterous sounds of progressive house: "If EDM is no longer the loudest stage of the festival, something is changing." She sealed her argument by comparing Chicago's Wavefront Music Festival, which had included EDM among its musical flavors, to a new festival in the city called Mamby on the Beach, which featured plenty of electronic dance music and no EDM at all.

And no, that's not a contradiction. "EDM" has never actually been an initialism for "electronic dance music" in sum; it connotes its era as specifically as "new wave" or "folk-rock." "EDM," Mixmag wrote in the summer of 2015, "means the drop-heavy, stadium-filling, fist-pumping, chart-topping, massively commercial main stage sound that conquered America. It means Dayglo vests, EDC [Electric Daisy Carnival], Ultra [Music Festival, in Miami], Vegas pool parties, and flying cakes. It's possibly somewhere between electro and progressive house, directed by Michael Bay, and like many music genres, trying to pin it down exactly is like trying to grab a fistful of water. Or should that be a fist-pump of water?"

If EDM was on life support that August, its death certificate was officially signed the following month in the aftermath of the third TomorrowWorld, an American adaptation of the annual Belgian festival Tomorrowland (renamed to avoid Disney's copyright lawyers), where, on the third day, a storm forced the festival's organizers to — not cancel the event — but close it off to anyone not already among the 40,000 on-site campers. Thousands of exhausted kids, unprepared for the conditions, were stranded.

Photos online abounded of kids sleeping on the hoods of police cars, or on folding tabletops, huddled against the cold. The mayor of Chattahoochee Hills, on the city's website, was forced to plea for help from "tractors to help pull cars out of the mud." The mayor went on to criticize the festival's "serious promoter communication issues and transportation vendor failures"; festivalgoers complained of shuttle buses stranding them after getting lost, then stopping running altogether; unattended porta-potties; and bad security and a complete lack of organization. "How TomorrowWorld Became an Epic Disaster of Near-Riots and Looming Lawsuits," is how Vice titled its report.

Only two years earlier, EDM had been blazing brightly, having seemed to completely overtake the music business. "I think this is comparable to the generational shift in the sixties," CAA's Rob Light said in his opening remarks at the 2013 EDMBiz conference:

In 1964, TV is just coming into its own. No one really understands the power of television until the Beatles walk onto Ed Sullivan. The world changed that day. It started the sixties counterculture, a generation shifted, and a youth movement basically said to its parents, "F*** you, this is ours." It was cataclysmic. You are now in that same moment, because technology is television. And for the first time, even those of you who've been in [the dance-music business] for fifteen or twenty years, the younger generation, at twenty-five and below, follows technology the way that generation does TV. They're basically using electronic music and these festivals and this lifestyle to say to their parents, "I don't want to share music with you. This is mine." It is an unbelievably opportunistic moment. 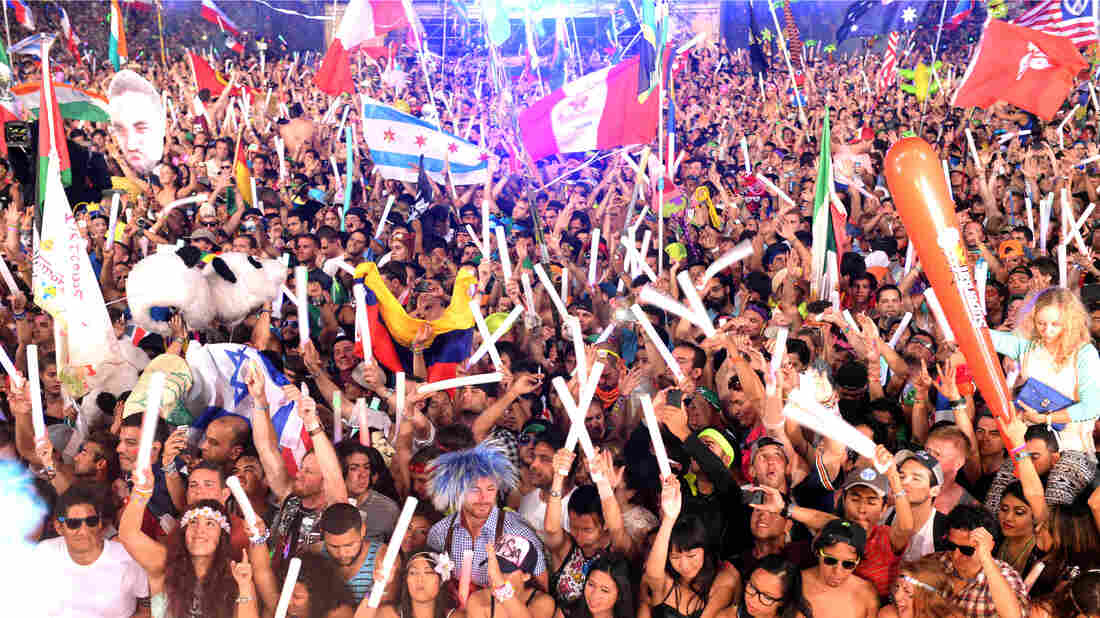 The crowd during TomorrowWorld on September 29, 2013 in Fairburn, Georgia. Jeff Kravitz/FilmMagic hide caption 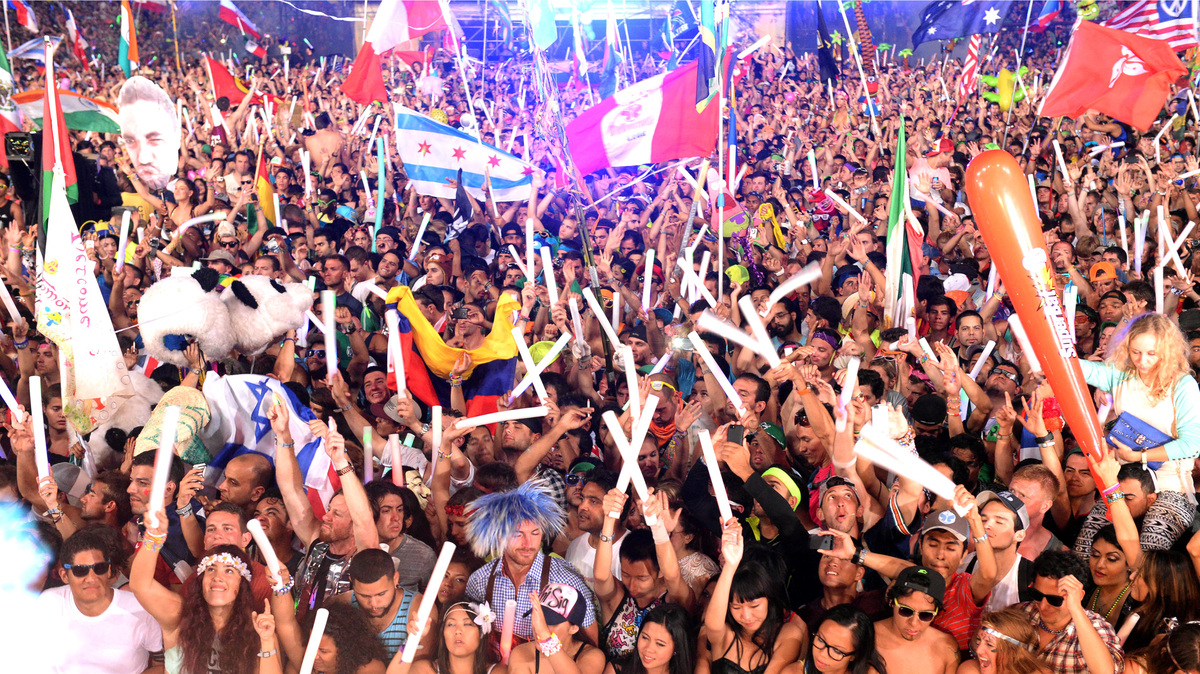 The crowd during TomorrowWorld on September 29, 2013 in Fairburn, Georgia.

The speed of that change can be difficult to recall even a few short years later. "Most of the promoters in this room are still buying print ads and radio ads," Light added. "None of my kids listen to radio or read the newspaper, and they're the ones going to these shows." The market imbalance between the rest of the world and America completely shifted — the first audience question during Light's keynote was a complaint that the U.S. had sucked all the talent away from Europe, and had driven up prices past what the European market could sustain.

EDM's precipitous initial storm had many factors driving it. A big one was sheer pop synergy — beginning in the late 2000s, a number of Billboard chart-toppers were beginning to hire hardcore dance producers to make hits with. "[When] Pitbull heard my underground stuff, it was really exciting," Afrojack told me in 2013. "He's not just a rapper. He takes everything he hears and sees and thinks, 'This can be big. It's big in dance but it could also be big in pop.' Then he combines them and calls the producers."

"I DJ every week and I see numbers of people who come out every week," Damien Higgins — the drum & bass DJ who works as Dieselboy, as well as a merchandiser for Dungeons & Dragons — said in 2011. "The past few years, I feel like there are more people excited about going out and getting in the scene than ever before. I'm just seeing so many events, even big festivals, selling out. There was a bubble in the late '90s-early 2000s. Now it's even crazier than before."

That year saw the EDM watershed — the Las Vegas debut of Electric Daisy Carnival (EDC), the L.A. festival that had been growing in outsized leaps during the late 2000s. The dance-music business was growing hand over fist — on average, 30 to 40 percent a year for six years leading up to 2013, according to international dance promoter Disco Donnie Estopinal. A death at EDC Los Angeles prompted the party's relocation. Estopinal, who had helped build EDC before departing after the 2011 Vegas edition, recalled that the term EDM had become popular beginning around 2008. "There was a concerted effort on all of us to say, 'This is a dance concert,' " he added. "But in the end it's still a rave to me." 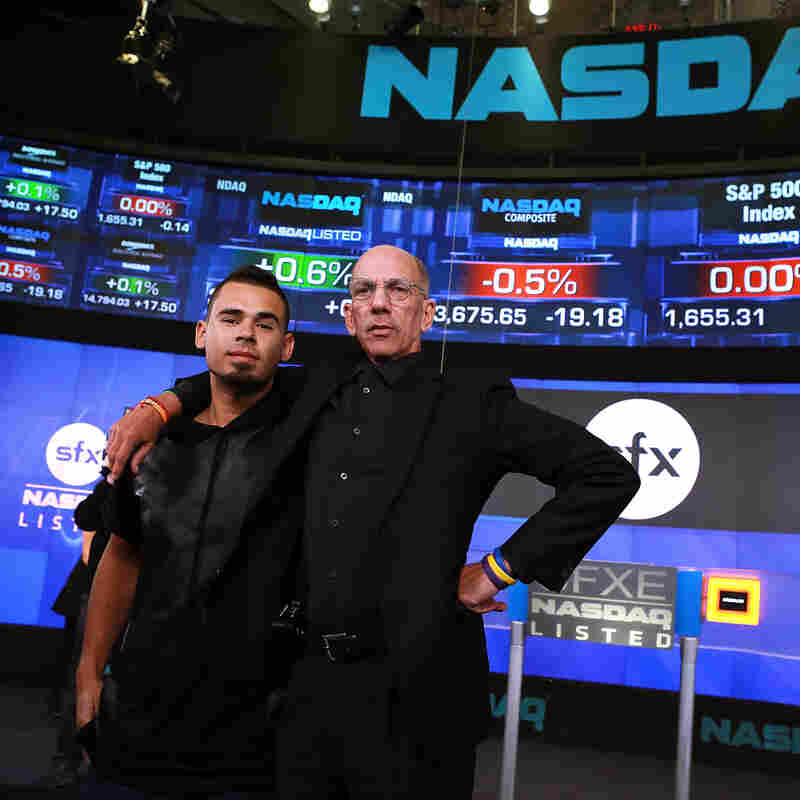 Except that raves in America had never been this populous, or so... un-subcultural. Joshua Glazer, host of the Rave Curious Podcast, recalled seeing the crowd at Miami's Ultra Music Festival, around 2008, chanting "Ti-es-to! Ti-est-to!" like they were watching Monday Night Football. The term "raver" was beginning to be replaced by "rager," which had come in, a DJ told me in 2013, "because of the big frat element."

As Julious noted of Lollapalooza 2015, what EDM excelled at was size. At EDM festivals, booking agent Brad Owen said in 2013, "The small stages have bigger stages than the main stage of Coachella." And as certain performers began to break out — in particular, Skrillex, who helped popularize dubstep in the U.S. and won eight Grammys for his trouble — they took their colleagues with them. "The scene blew up," Carter Adams, a booking agent who handled several dubstep DJs in the early 2010s, recalled in 2014. "All of a sudden, I could hit festivals up and get six times what they were getting in the club, just because people wanted dubstep."

Dance music had always been a black sheep in the larger music community. But much of this stuff, however popular, was not even beloved within its own segment of the industry. By June of 2013, Daleri's "Epic Mashleg" — a one-minute-long concatenation of several current best-selling dance tracks that all sounded about the same — offered a quick-and-dirty auto-critique to a scene in desperate need of a reality check.

Enter Robert Sillerman — who in 2000 had sold his previous company, SFX Entertainment, to Clear Channel for $4.4 billion. That sale would eventually lead to the merger that would lead to the concert behemoth now known as Live Nation. In 2012, Sillerman started another company called SFX, and pledged to spend a billion dollars toward conquering the EDM business. He was hardly the first: When Sillerman announced his intentions, the run on EDM properties had been going on for about eighteen months already. Sillerman told NPR, "If there was a contribution we've made, it's to make it easier for fans and DJs and producers around the world to access it." The punch line, of course, is that fans and DJs and producers had never had any trouble accessing it prior to SFX's involvement. When SFX went public in 2013, its initial offering of $13 a share dropped roughly eight-and-a-half percent, to $11.89, by the end of its first trading day. Two weeks before TomorrowWorld, that September, SFX's stock was trading at $0.45 a share.

Having attended the second TomorrowWorld myself, the fiasco of the third did not come as a surprise. Walking around the grounds those three days, it was impossible to avoid the sight of frat dudes wearing Native American headdresses.

It's hardly a surprise that EDM provoked a backlash within dance culture. The festival market corrected itself — and dance music, which has long been a form by and for outsiders, has worked to culturally correct itself as well. DJ culture has increasingly become femme-centric, with more women and trans folks, of a greater variety of hues, coming to the fore in DJ circles, thanks in part to the likes of Brooklyn promoters and bookers Discwoman. Meanwhile, EDM's Sensurround blitzkrieg lives on as the blueprint for the immersive pop environments of K-pop stars BTS, whose in-the-round experience has clear roots in the overwhelming environment of an EDC. And the leading "adult" clubbing brand, Spain's Elrow — which throws a weekly residency in Vegas — offers all the geegaws of a kiddie rave (sorry, "dance concert") with a lighter touch.

Of course, dance festivals have gone precisely nowhere; the market corrected itself, and they still dot the landscape, in particular the old-guard fests, such as EDC and Electric Zoo, which have owned the coasts for more than a decade. But smaller events, in the five-thousand range, have become the move—better crowd control, better vibe, better music. San Diego's CRSSD, held over two days in late September, concentrates on latter-day talents like Yaeji and Amelie Lens, rather than the sodden sing-alongs of Swedish House Mafia. "I'd rather have three sub-10,000-person festivals, because they have a much better vibe, than have one with 30,000 people," Claude VonStroke of Dirtybird, which puts on several events per year, said last year. "One 30,000-person festival would make way more money. But I don't want to."

Going big, in fact, is increasingly frowned upon in dance music. This summer, the dance site Resident Advisor ran a feature about how DJ culture can help combat the climate crisis — a sharp reversal from the doomsday-flouting expenditures of peak EDM. And the blaring fist-pump of EDM-pop that ruled the first half of the 2010s has fluttered out, in favor of Xanaxed-out depressive pop — perhaps the long hangover after EDM's nonstop serotonin rush. If it's not precisely a backlash, it sounds close enough.

This story originally identified the music festival Mamby on the Beach as the continuation of an earlier Chicago event, the Wavefront Music Festival. They are separate entities.