Accessibility links
Near-Future Kuwait Is The Backdrop For 'Mama Hissa's Mice' Saud Alsanousi's novel follows a group of Kuwaiti kids growing up in the 1980s — then jumps to a near future torn by sectarian violence. It's a resonant book that asks more questions than it answers. 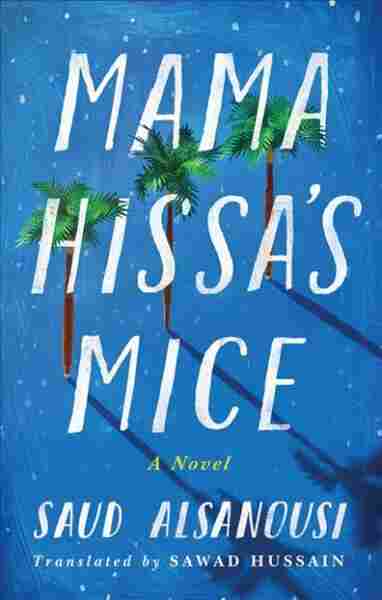 In an interview with ArabLit this year, critic Hend Saeed asked Kuwaiti author Saud Alsanousi about what his Western readers might lose in translation. "Dealing with the Western reader isn't easy if we take into consideration what they don't know about us, by which I mean the Kuwaiti culture in particular," Alsanousi said. He added, "That puts a huge burden and responsibility on me, when I write and present my local culture and heritage."

He's not wrong; I suspect that relatively few American readers of Alsanousi's newest book to be translated into English, Mama Hissa's Mice, will be familiar with Kuwait's history, diverse population, culture or rising political tensions. Yet translator Sawad Hussain has succeeded in bringing this beautiful, affecting novel to an English-reading audience and has captured clearly the emotional, political and aesthetic concerns preoccupying the book.

Mama Hissa's Mice, published in its original Arabic in 2015, takes place in a near-future Kuwait that has succumbed to sectarian violence and chaos, though not without protest. A group of friends calling themselves Fuada's Kids has been trying to call the nation to attention for years through radio broadcasts, online articles and public actions, attempting to warn their fellow patriots of the dangers of hatred, intolerance and fundamentalism. But when our narrator, nicknamed Katkout, regains consciousness in the middle of the street one day in 2020 to find himself scratched up, his car half-destroyed and buildings ablaze, it appears that Fuada's Kids have failed. His phone is full of missed calls and text messages, but one in particular catches his eye — it's from his publisher in Beirut, asking Katkout whether he'll agree to cut four chapters from his forthcoming novel, The Inheritance of Fire, to prevent it from being censored and going unpublished altogether. In an instance of life imitating art, Mama Hissa's Mice itself has been banned in Kuwait since its release, despite its popularity. (The Ministry of Information apparently saw the novel's bleak premonitions of something like a civil war as a threat rather than a call to action.)

As Katkout in 2020 drives through burning neighborhoods and across a bridge where he needs to persuade a Shiite group to let him pass at one end and a Sunni group to allow him through at the other, the chapters of his own novel appear in interspersed sections. The Inheritance of Fire is an autobiographical work of fiction, beginning with Katkout's childhood in the 1980s in his beloved Surra, the neighborhood he grew up in. At times idyllic — Katkout and his friends Fahd and Sadiq got up to all sorts of boyhood antics indoors and out, climbing the trees in Fahd's backyard, playing video games, listening to Fahd's grandmother Mama Hissa tell stories, running errands to get away from their parents — there is, nevertheless, a simmering tension running through their lives. Fahd's and Sadiq's fathers are sworn enemies, constantly arguing, putting each other down and messing up their children's' friendships, all because each family belongs to a different sect, while Katkout, who finds the Shiite-Sunni divide deeply confusing as a child, is told by his mother, "You're Muslim and that's it. ... Isn't that enough?"

Indeed, for Katkout, being Muslim is enough. He engages with his faith in various ways as he grows up, but never loses it. In fact, in the near-future narrative, it is a faceless collective called the Atheist Network that ends up getting Fuada's Kids into deep trouble. By implying a relationship between their groups, the Atheist Network causes religious and political leaders on both sides of the sectarian divide to denounce Fuada's Kids. When the location of their headquarters is leaked and one of their members gets doxxed, Katkout's mission of locating his loved ones and staying safe becomes ever more pressing, a tension that is heightened by the novel-within-a-novel chapters that keep intruding, forcing us as readers to remember the past, much as Katkout himself is haunted by it.

'Mama Hissa's Mice' is a rich and resonant book that asks more questions than it (or anyone) can answer.

Right in the center of the book comes a long, unbroken portion of Katkout's novel that deals entirely with Iraq's invasion and annexation of Kuwait in 1990. Alsanousi creates in these chapters a deeply moving portrait of the effects of occupation and war through the eyes of a boy growing up too fast, relying on stories and chosen family to get through the fear, uncertainty and grief. Living through the Gulf War seems to change Katkout and his friends forever, although it takes them years of maturation and self-discovery before they can start Fuada's Kids. But they do, eventually, and thus the line connecting the novel-within-a-novel to the 2020 narration is complete.

Mama Hissa's Mice is a rich and resonant book that asks more questions than it (or anyone) can answer: What do stories — of past grudges, of present loves, of friendship despite historical differences — mean? How do they shape our realities? How much power do we have to change these stories? At times bleak and at others uplifting — the arrival of a young girl who believes in Fuada's Kids' mission toward the end of the novel feels like a symbol of hope and future possibility — Alsanousi's book, reflective of his own particular country, culture and sociopolitical context, can serve as both window and mirror to Western readers.

Ilana Masad is an Israeli American fiction writer, critic and founder/host of the podcast The Other Stories. Her debut novel, All My Mother's Lovers, is forthcoming from Dutton in 2020.