Accessibility links
In Syria, U.S. Military Says Fight Will Continue Against ISIS Many U.S. special operators have been ordered out of Kurdish-controlled areas of Syria, but other troops have arrived to guard oil installations. The Pentagon says the mission is still to fight ISIS. 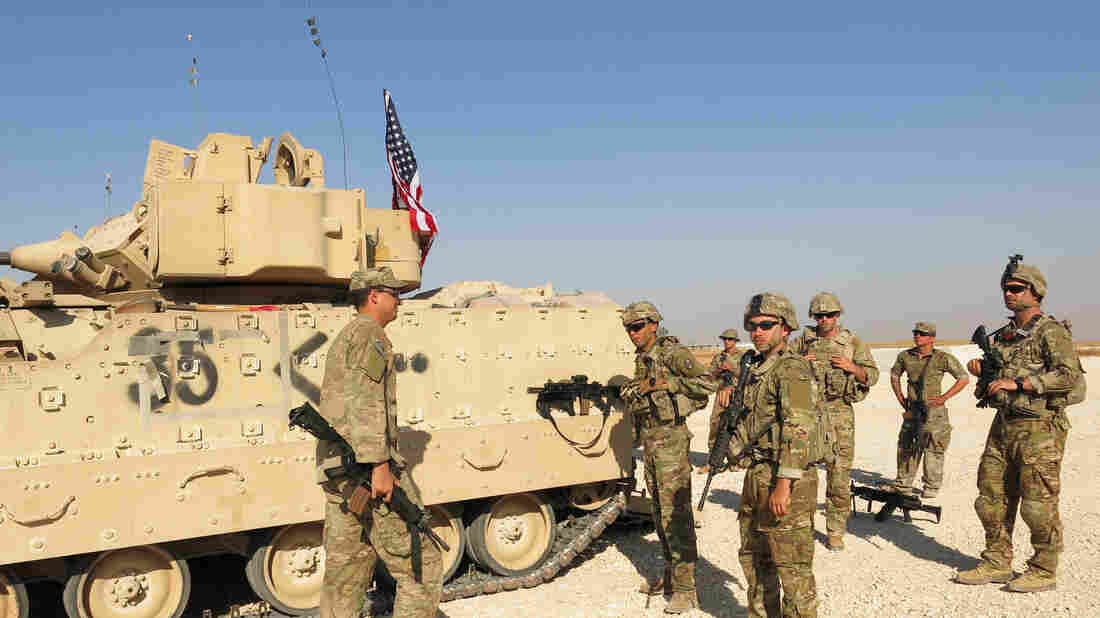 A new U.S. brigade combat team arrives in front of a Bradley Fighting Vehicle at a base in Syria's Hasakah province. Jane Arraf/NPR hide caption 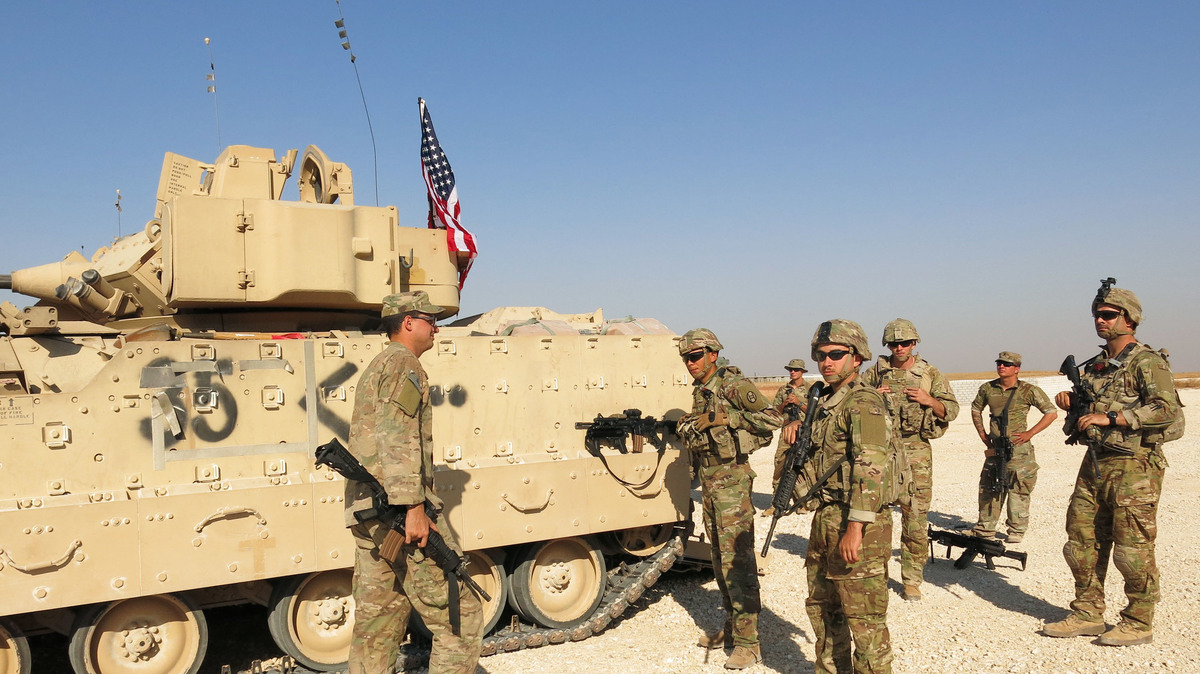 A new U.S. brigade combat team arrives in front of a Bradley Fighting Vehicle at a base in Syria's Hasakah province.

At a military base in Hasakah province in northeastern Syria, a Bradley armored fighting vehicle churns up sand as it speeds past a TV camera, an American flag flying behind its turret.

The Bradley, airlifted in from Kuwait, was demonstrated for a small group of journalists, the first group of reporters taken by the U.S. military to Syria since President Trump announced late last month that he would leave troops there to protect oil installations.

The mechanized National Guard brigade combat team that is tasked with protecting infrastructure has been in Syria for a little over a week now, a key part of the U.S. military's repositioning of forces. While Pentagon officials will not put an exact figure on the number of troops expected to remain in Syria, they have said it is likely to be a few hundred fewer than the roughly 1,000 troops deployed there before October.

The policy changes have shaken up an already volatile region and severely tested the relationship between the U.S. and the Kurdish-led Syrian Democratic Forces, one of Washington's closest allies in the fight against ISIS.

The National Guard troops who have landed in Hasakah from Kuwait so far have seen none of that in encounters with the region's residents, though. When Lt. Jacob Moore, from Vero Beach, Fla., led his platoon in escorting a U.S. military convoy between bases this week, he was surprised at people's reaction.

"It was incredible," he says. "We got out to the city limits and groups of people would start coming out. And they were all waving and smiling at us as we got closer to the city center. ... The impression I got from the general populace is that they supported us being here and were very happy to see us here." 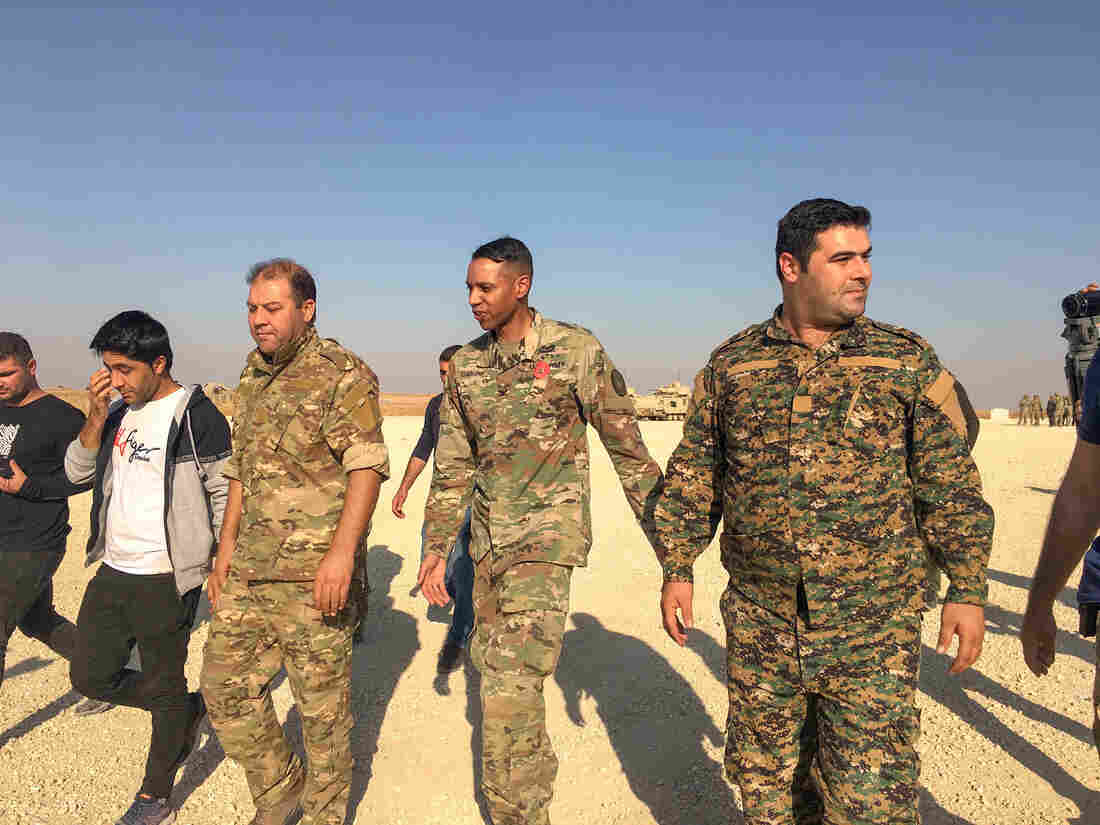 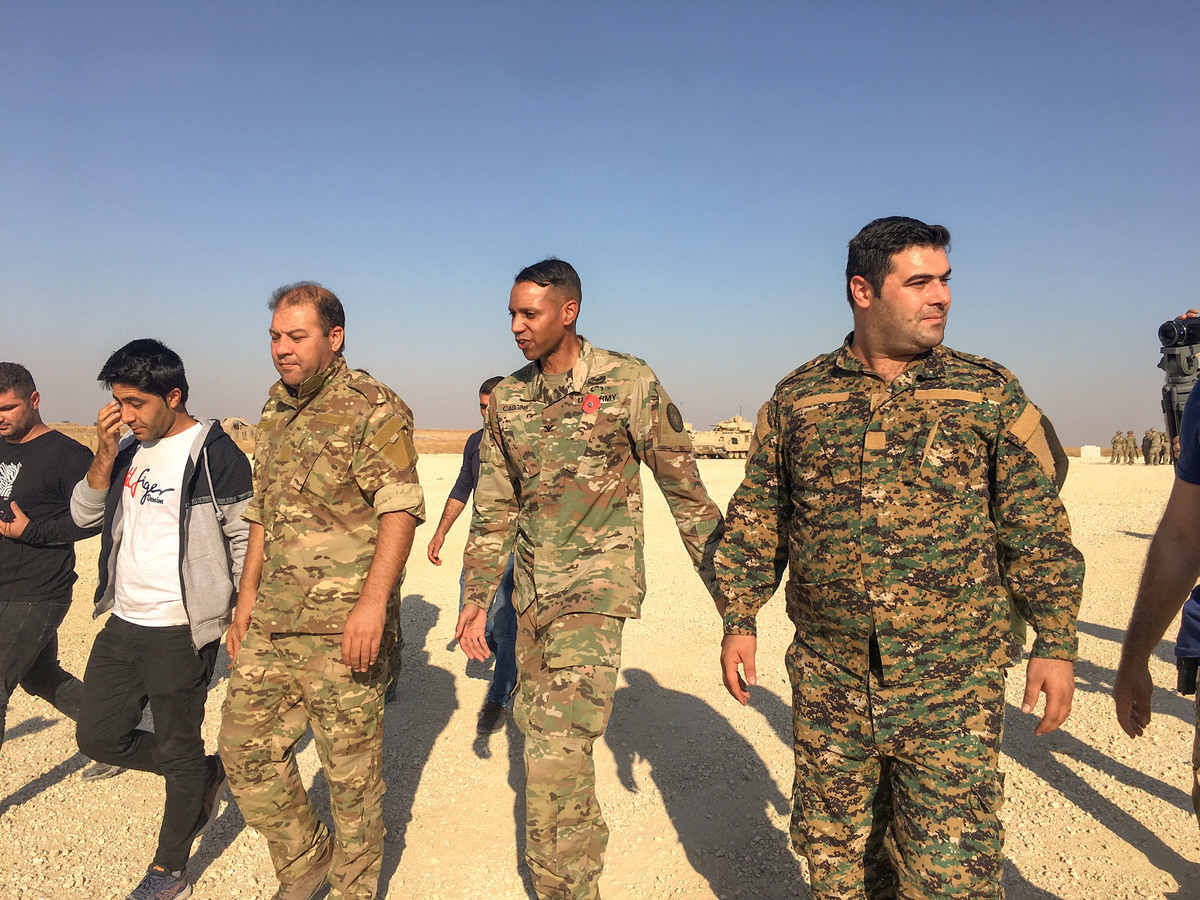 Residents of northeastern Syria see the U.S. troops as protection from a wide variety of hostile forces — Turkish forces that invaded Syria in October, Turkish-funded Arab mercenaries, and the Syrian regime of Bashar Assad, from which this Kurdish-led region broke away seven years ago.

But the U.S. troops are deployed to protect oil installations, not people. American military commanders say it's part of the continuing fight against ISIS, even though Trump has declared the group defeated.

When the president announced the U.S. withdrawal from Syria last month, it paved the way for a Turkish invasion that has threatened Syrian Kurdish forces, who have already lost more than 10,000 fighters in the U.S.-backed fight against ISIS.

Trump then announced that mechanized units with hundreds of conventional troops would protect oil installations in eastern Syria. The repositioning has left U.S. military commanders scrambling to defend or even define a policy that is meant to continue the fight against ISIS, while withdrawing specialized forces who were doing so.

"The oil — that's just another revenue generation source, one of many that ISIS tries to utilize. And we will continue to keep that out of their hands," says Maj. Gen. Eric Hill, the special forces commander in Iraq and Syria, speaking on Monday to the visiting group of U.S. and Kurdish journalists at the remote base in Hasakah.

When asked how armored vehicles would help in the fight against ISIS — which, after its territorial defeat, has gone to ground — Hill says: "I would say our force mix currently has an array of capability. We have multiple different capabilities to get at ISIS. But our primary way that we do that is through our partner. It's through intelligence, it's working with the partner."

That U.S. partner — the Syrian Democratic Forces — controlled one-third of Syria after breaking away from the Syrian regime to establish an autonomous, secular, Kurdish-led but multiethnic region known as Rojava. The future of that region is now in doubt.

The SDF secures bases for U.S. forces. And while there had been American worry that the abrupt U.S. pullout — widely seen as a betrayal of a close ally — could pose a security risk, one U.S. Army officer says his Syrian Kurdish counterparts assured him they would still protect U.S. forces.

"They told us they were prepared to die for us," said the officer, who spoke on condition of anonymity for operational security reasons.

The sudden withdrawal of American forces near the Turkish border, which came after a phone call between Trump and Turkish President Recep Tayyip Erdogan, cleared the way for Turkey's offensive. Under an agreement with Russia, a main ally of the Syrian regime, Kurdish forces withdrew from a roughly 20-mile-deep zone along the border. 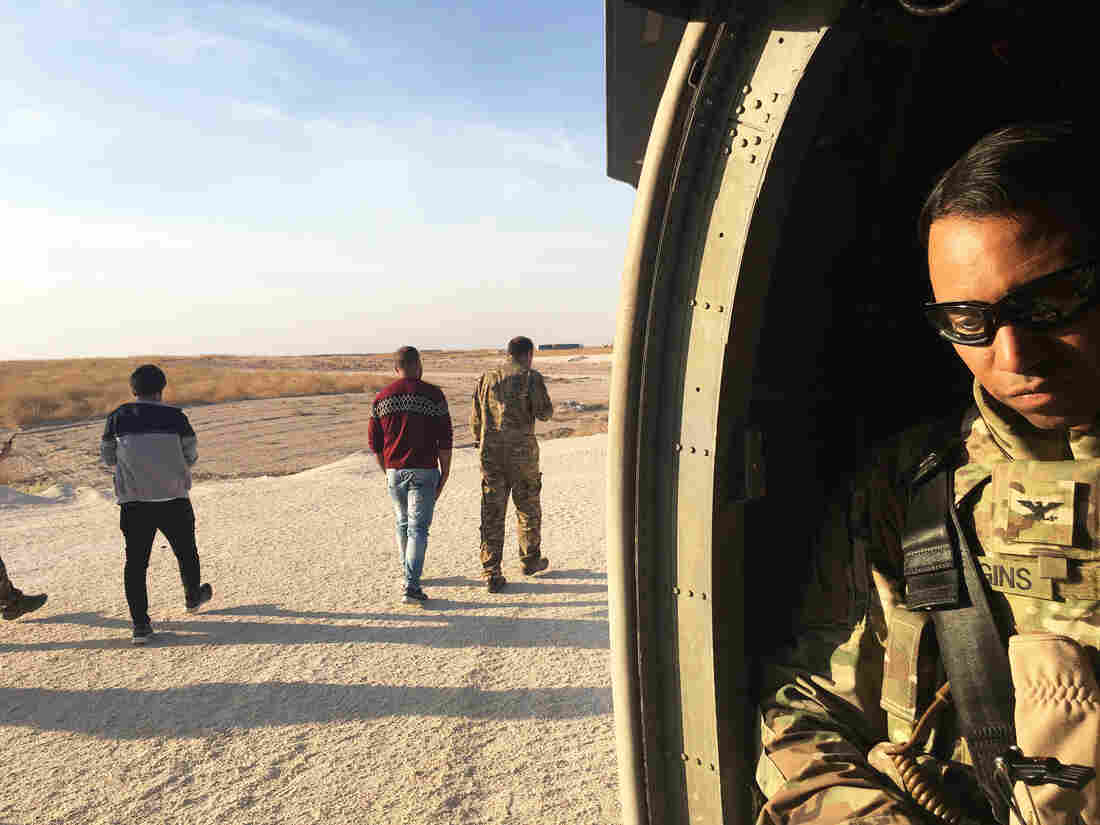 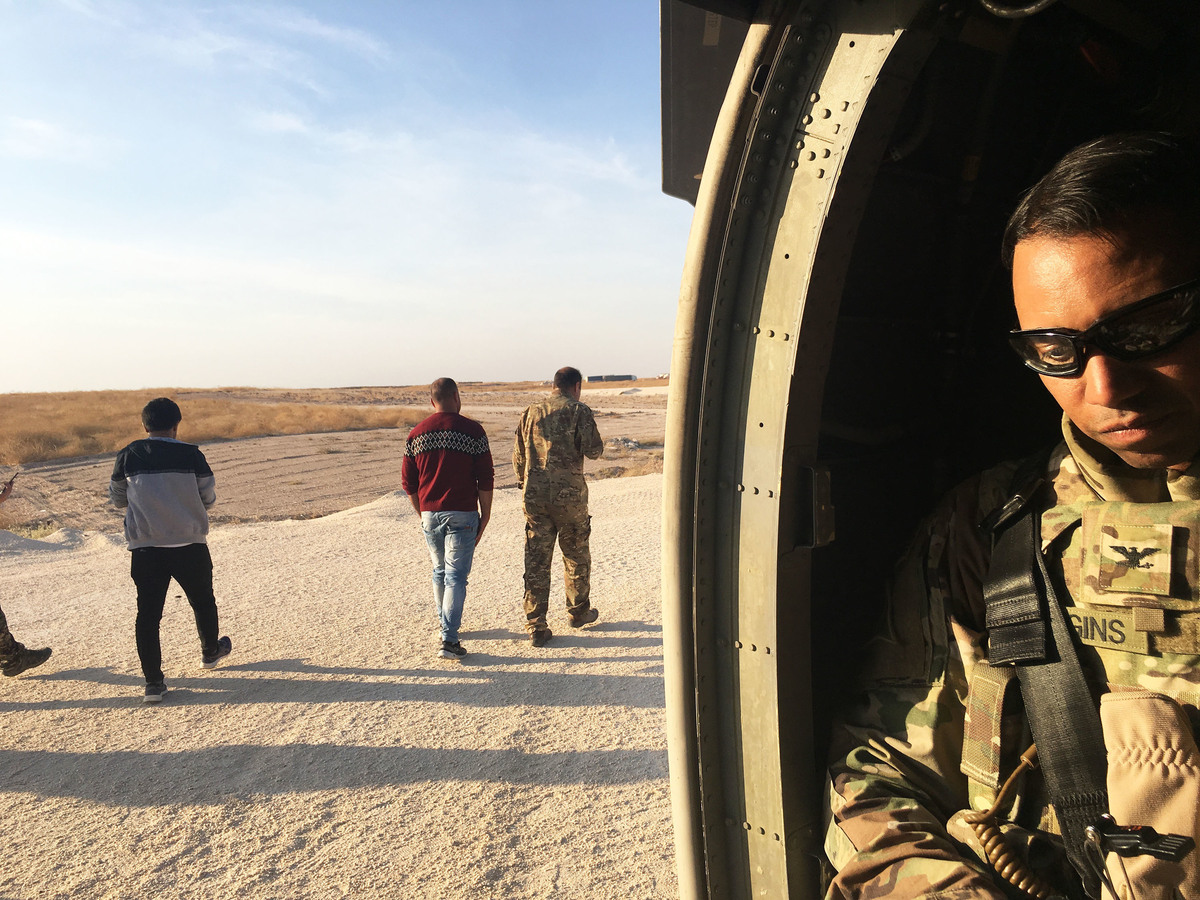 Col. Myles Caggins III, the spokesman for the U.S.-led anti-ISIS coalition, leaves a base in Syria's Hasakah province after saying goodbye to Kurdish spokesman Mustafa Bali.

While Bradleys and Apache attack helicopters continue to arrive in oil regions of northeastern Syria, U.S. special forces and others are still departing from border areas, including near Kobani, where the SDF fears a Turkish incursion outside the zone agreed with Russia.

Kino Gabriel, an SDF spokesman, says the vacuum created near Kobani, where Turkish troops and Turkish-funded Arab mercenaries are closing in, is particularly threatening Christian and other minority communities that have lived in the area for centuries.

While the U.S. military and SDF both publicly emphasize their ongoing cooperation in fighting ISIS, and both sides expect the relationship to survive, it is clear there are strains.

At the base in Hasakah on Monday, Gabriel and Mustafa Bali, another SDF spokesman, meet Col. Myles Caggins III, a U.S. military spokesman — the first time they have met a spokesman for the U.S.-led anti-ISIS coalition in five years of military cooperation.

The Kurds greet Caggins warmly, kissing him on the cheek, as is the region's custom.

"It's been five years that we are working together and we are in the same fight together, actually," Bali reminds Caggins.

At a joint press conference, they avoid talking about the consequences of the U.S. withdrawal from Kurdish-held territory and Turkey's subsequent attack on a U.S. ally.

Speaking to NPR afterward, Bali is more candid. While U.S. soldiers were celebrating Veterans Day with their families at home, he says, Syrian Kurdish fighters were going home in coffins.

"The thing which makes me sad is, in five years working with the U.S. military, we became real friends fighting ISIS. But they are sad too, because they wanted to stay," he says. "Politicians gave them orders to leave. Politics made us victims."