Accessibility links
4 Dead As 'Tinder Box-Like Conditions' Fuel Catastrophic Bushfires In Australia The latest remains were found in a burned forest in New South Wales on Wednesday night. As of Thursday morning, there were nearly 70 fires in that state, and more than 70 in neighboring Queensland. Ferocious wildfires were burning at emergency-level intensity across Australia's New South Wales, most populous state, on Tuesday as authorities warned most populations in their paths that there was no longer time to flee. Dan Peled/AP hide caption Ferocious wildfires were burning at emergency-level intensity across Australia's New South Wales, most populous state, on Tuesday as authorities warned most populations in their paths that there was no longer time to flee.

More than 100 fires are raging in eastern Australia, and thousands of firefighters are battling the blazes amid brutally dry conditions that will likely get worse in the coming months. Police say the remains of one man were found in a burned forest in northeast New South Wales on Wednesday night.

As of early Thursday morning, there were nearly 70 fires burning in New South Wales – the most populous state in Australia – and more than 70 in neighboring Queensland.

The BBC had noted that in NSW, three people had died and nearly 200 homes razed since Friday. Some 14 homes had been destroyed in Queensland since Friday, according to The Associated Press.

The Insurance Council of Australia said Wednesday that it had received 450 claims related to the bushfires in New South Wales and Queensland. "Insured losses are estimated at $50 million," or about $34 million in U.S. currency. "Many more claims are expected to be lodged in the coming days and weeks."

Tuesday was a day of "exceptional fire danger" in New South Wales, according to the area's Rural Fire Service, with 19 fires there that reached the "Emergency Warning" level. Three areas of NSW were warned of "catastrophic" conditions on Tuesday, the highest of Australia's six-point fire danger scale. According to fire officials, at least 50 homes were damaged or destroyed in Tuesday's fires alone.

NSW had 3,000 firefighters deployed or on standby on Tuesday, in addition to thousands of other police and emergency service workers, NSW Rural Fire Service Commissioner Shane Fitzsimmons told reporters. He says that so far this season, NSW has seen a 1000 km (621 mile) fire edge perimeter that has burned more than a million hectares (3,861 square miles).

"We are talking significant fires already across New South Wales and under catastrophic conditions, fires that start and take hold will grow and develop extremely quickly and become large fires very, very easily," he said Tuesday. "They will burn very aggressively and we can expect to see volatile conditions." 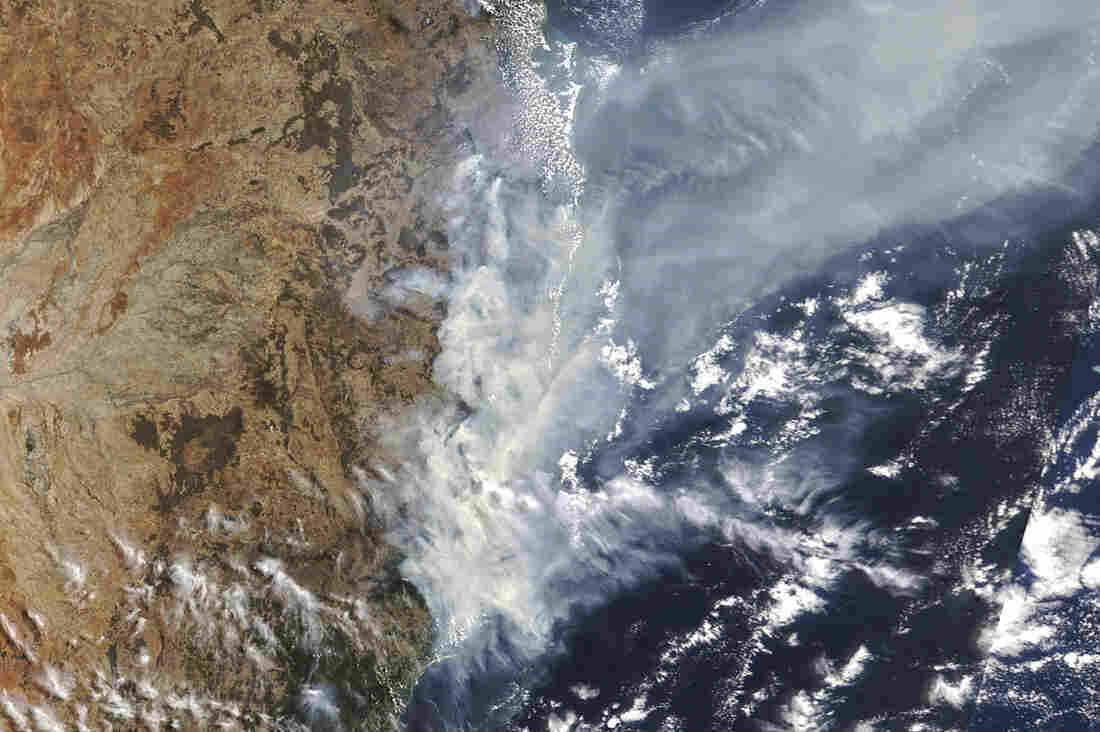 Bushfires in the eastern part of Australia's New South Wales state are visible from space in this photo taken by NASA. AP hide caption

Queensland has declared a state of emergency in 42 "local government areas," which prohibits people from doing things that could start fires such as welding or using outdoor cooking fires that aren't full enclosed. "We're experiencing tinder box-like conditions across much of the state and all it takes is one spark to start a fire that may burn for days," Queensland Fire and Emergency Services Acting Commissioner Mike Wassing said in a statement.

In Queensland on Wednesday, strong winds brought down a water-bombing helicopter near Toowoomba. "The pilot was taken to Toowoomba Hospital with reported minor injuries, and the crash stopped all water-bombing activity on that fire," The Sydney Morning Herald reported.

As The AP notes, some areas in Queensland have evacuated several times this week, such as Queensland town. "It's bad enough being evacuated once let alone multiple times," said the town's mayor Tony Wellington, according to the wire service.

It's worth noting that Australia is just now heading into summer, and hot, dry conditions are expected to continue. NSW has suffered from crippling drought, making fire conditions even worse.

Scientists have said that bushfires in Australia are exacerbated by conditions linked to climate change. In a 2018 Australian government report, scientists concluded that "there has been a long-term increase in extreme fire weather, and in the length of the fire season, across large parts of Australia."

Climate change's impact on the fires has become a political lightning rod in Australia. For example, conservative deputy prime minister Michael McCormack has described those who link them to climate change as "raving inner-city lunatics." He said that fires are nothing new in Australia, and that the people impacted "don't need the ravings of some pure, enlightened and woke capital city greenies at this time."

These fires are expected to continue. "We will not have all these fires contained and locked up for many, many weeks," said Fitzsimmons, the NSW Rural Fire Service Commissioner, according to Reuters. "Unfortunately, what we need is rain."