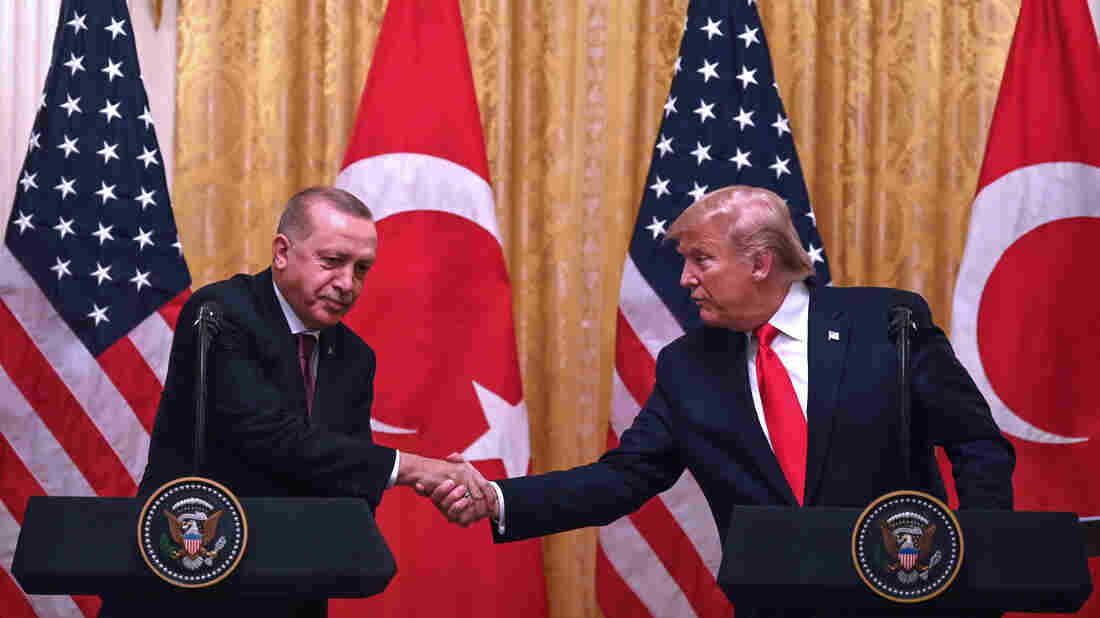 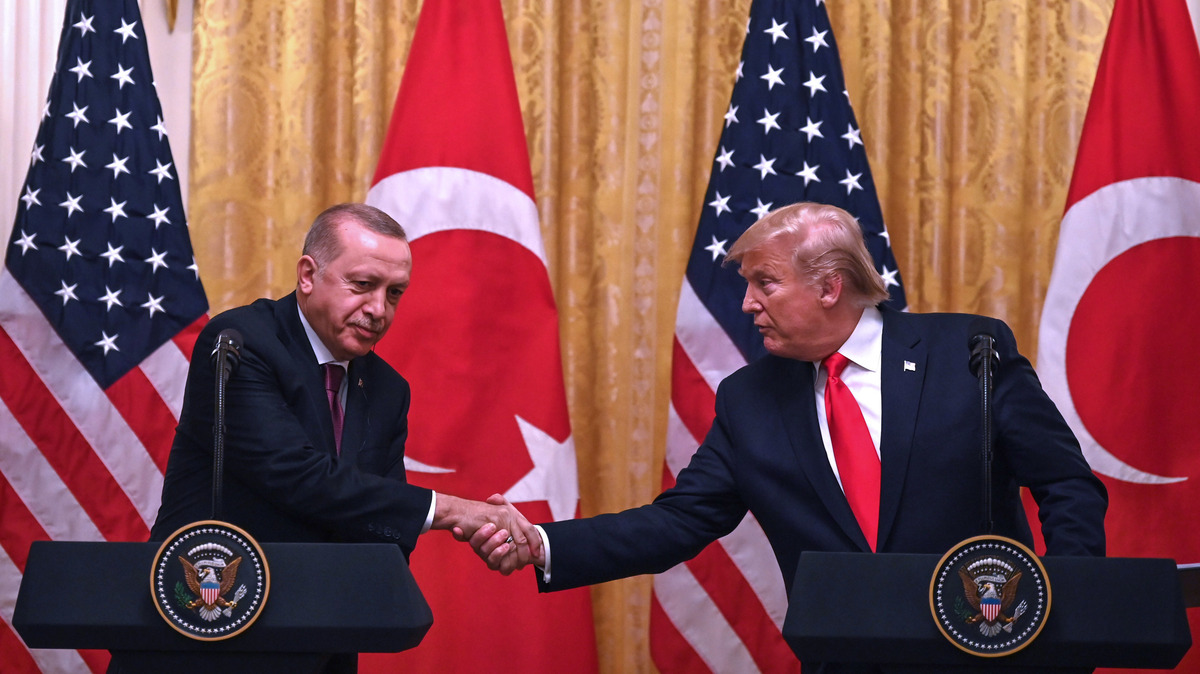 After welcoming Turkish President Recep Tayyip Erdogan on the opening day of public impeachment hearings for a second visit to the Oval Office, President Trump did something highly unusual for such encounters: He invited a select group of Republican senators to join the two leaders' meeting.

Trump's decision to invite fellow Republicans only from the GOP-led Senate was telling. Bipartisan legislation and resolutions condemning Turkey's Oct. 9 invasion of northern Syria (three days after Trump removed U.S. forces from that area) have abounded on both sides of the Capitol, but only the Democratic-held House of Representatives has actually voted on and passed such measures.

On Oct. 16 — the same day that Trump announced sanctions against Turkey for its Syria incursion — every member of the House GOP leadership voted in favor of a bipartisan resolution opposing Trump's decision to withdraw U.S. forces from the area invaded by Turkey and calling on Erdogan to end military action there immediately. The measure passed 354-60, with only Republicans voting against it.

Trump then dropped the sanctions for the incursion after one week, citing a cease-fire agreement worked out between the country and Vice President Pence.

The House was not swayed. It responded Oct. 29 with the Protect Against Conflict by Turkey Act. PACT, as the bipartisan measure was dubbed, calls for sanctions against high-ranking Turkish officials and requires a State Department estimate of the net worth of Erdogan and his family members.

"These sanctions are specifically designed to target the Turkish officials and institutions responsible for the bloodshed in Syria without senselessly hurting the Turkish people," House Foreign Relations Committee Chairman Eliot Engel said in a floor speech preceding the 403-16 vote that passed the measure. "After all, it is Erdogan—not the Turkish people—that is responsible for this horror. Erdogan is an authoritarian thug."

House Republicans joined in the condemnation of the Turkish leader. "We're sending a message to the Erdogan government that the U.S. will hold them liable for their actions," said Rep. Adam Kinzinger, R-Ill. "If he does not want to act like a NATO nation, then his government will feel the repercussions of such decisions."

The PACT floor action took place the same day the House infuriated Turkey by holding the first full chamber vote ever to condemn as "genocide" the mass murder of 1.5 million Armenians a century ago by Ottoman Turks. Again, the vote was overwhelmingly lopsided in favor, 405-11.

For decades, Turkey had successfully lobbied Congress to prevent such a vote characterizing that killing of Armenians as genocide.

"When I was ambassador to Turkey 15 years ago, there was a very deep well of public support for Turkey in the United States and particularly in the U.S. Congress, and that really doesn't exist very much anymore," says Eric Edelman, who served as the top U.S. diplomat in Ankara during the George W. Bush administration. "I think that the Turks have counted for some time on the personal relationship between [Erdogan and Trump] to get them out of the deep trouble they're in in the Congress."

Turkey's acquisition in July of Russia's S-400 air defense system crossed a line for many lawmakers. The Russian system is not only incompatible with NATO military equipment but is designed to shoot down advanced aircraft such as the F-35 stealth fighter jet — 100 of which Turkey had planned to acquire as a partner in the international consortium building the Lockheed Martin warplane.

For choosing Russia's S-400 over Raytheon's Patriot surface-to-air missile system, Turkey was kicked out of the F-35 consortium, and training of its pilots to fly the stealth fighter at U.S. military bases was suspended.

But lawmakers are demanding further punishment for Turkey's defiance. The House's PACT measure designates Ankara's acquisition of the S-400 system as a "significant transaction" with Russia's arms industry. That would automatically oblige the Trump administration to impose on Turkey five of 12 sanctions listed by the 2017 Countering America's Adversaries through Sanctions Act.

Under that law, it's actually up to the executive branch to determine whether a "significant transaction" has occurred. Because the Trump administration has failed to do so, Sens. Robert Menendez, D-N.J., and Chris Murphy, D-Conn., have introduced a privileged resolution in the Senate obliging Secretary of State Mike Pompeo to make such a determination within 30 days of the resolution's passage. Such a rarely used privileged resolution could bypass the Foreign Relations Committee and would have to be voted on by the full Senate, where it would not need the 60 votes usually required for final consideration.

"The administration is breaking the law by ignoring this provision [of CAATSA] and kowtowing to Ankara," Menendez said last week on the Senate floor. "Turkey must be sanctioned for the S-400 system, and it should happen today — otherwise, it will send a global message that we are not serious about sanctioning significant transactions with the Russian military."

It appears unlikely the privileged resolution will sway Senate Majority Leader Mitch McConnell, R-Ky. "Do we know what the political impact such sanctions will have inside Turkey?" McConnell asked late last month on the Senate floor. "Will they weaken President Erdogan or rally the country to his cause? Do we know the impact sanctions will have on U.S. companies?"

The U.S. has been the source of nearly two-thirds of Turkey's imported weapons of war, according the Stockholm International Peace Research Institute.

"If you go back over the last few decades, Turkey is one of the major importers of U.S. weapons," says William Hartung, director of the Arms and Security Project at the Center for International Policy. "A huge proportion of their arsenal comes from the United States."

But efforts in both the House and Senate to curtail arms sales to Turkey, which hosts several key U.S. military bases, have failed to gain much traction in a Congress where most lawmakers have significant numbers of defense contractors in their home states.

The peril of pushing too hard on placing U.S. weapons off limits is that Turkey may go shopping elsewhere, says Philip Gordon, a senior fellow at the Council on Foreign Relations.

"If the current trends continue — more sanctions or an absolute ban on weapons sales to Turkey — then Turkey pivots and buys all of its arms from Russia and other suppliers," says Gordon, who oversaw Turkish affairs in the Obama White House. "And then the strategic relationship within NATO is really broken."

Turkey's relationship with Congress may already be broken. Not so much, though, at the Trump White House.