Accessibility links
Review: 'Ford v Ferrari' Takes The Checkered Flag Matt Damon and Christian Bale star in the story of Ford's attempt to create a car that will best Ferrari at Le Mans in this "rollicking" "wildly entertaining" film.

'Ford v Ferrari' Will Get Your Heart Racing

'Ford v Ferrari' Will Get Your Heart Racing 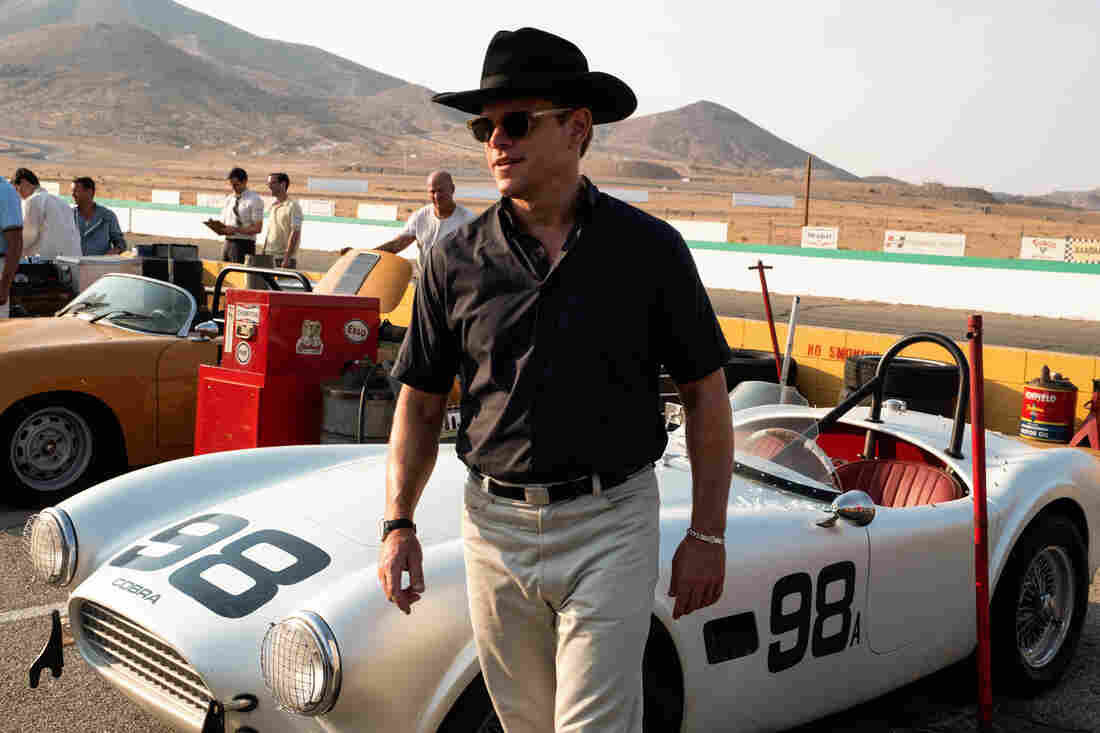 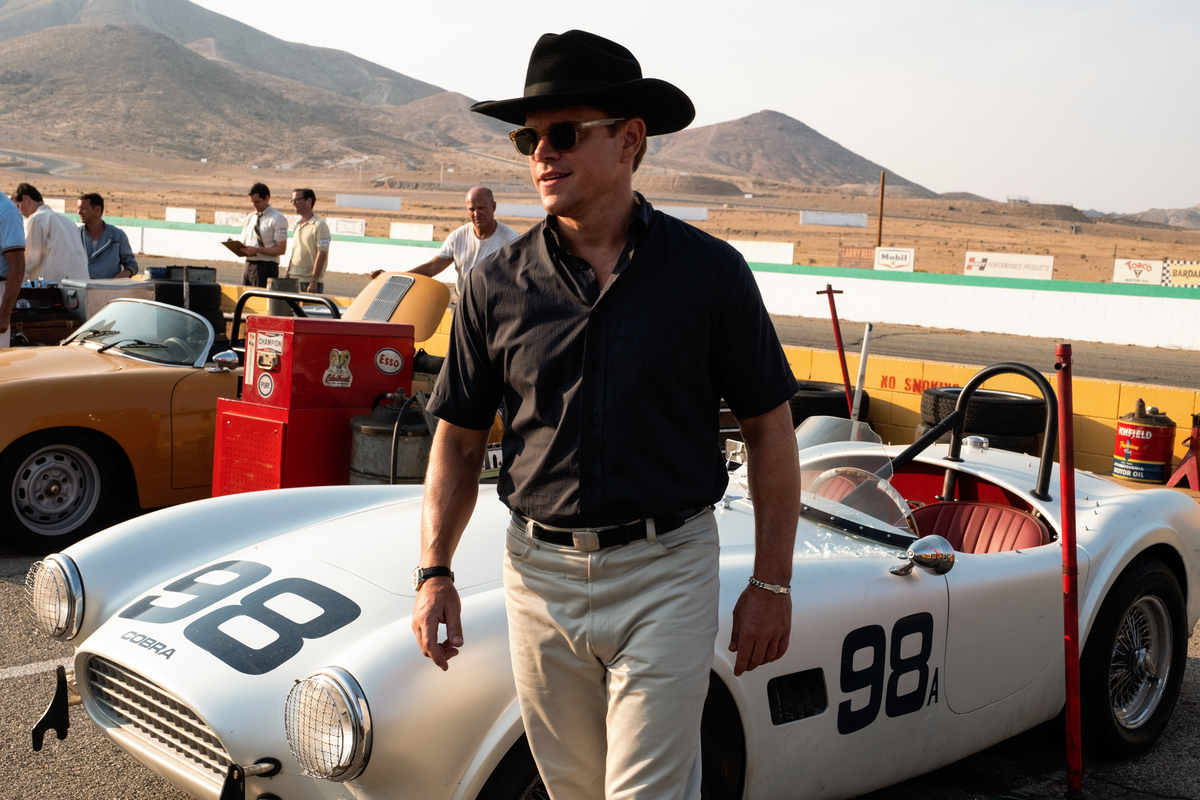 In a deliciously digressive sequence of the rollicking Ford v Ferrari, Mollie (Outlander's Caitriona Balfe), the otherwise supportive wife of test car driver Ken Miles (Christian Bale), treats her husband to a taste of his own medicine after he unilaterally takes what ought to have been a joint family decision. Exasperated, Mollie propels Ken into a hair-raising speed-ride through hairpin bends in the staid family car. The joke is that Ken, a congenital speed freak who also loves his wife to distraction, is terrified and begs her to slow down. The rest of the film is a celebration of Ken's inability to slow down anywhere, anyhow, for anyone.

Ford v Ferrari is based on real-life events, but I have no idea whether this wild ride ever took place. Not that it matters: Mollie's tough-love therapy inserts an intrepid woman into a mega-manly movie that could hardly be otherwise given its setting in the 1960s, when women were largely absent from the racing world. Director James Mangold (Walk the Line, Logan) has made Miles's story his own in a romp that takes to the road on its own terms, merrily having it all ways as it recounts Miles' alliance with former Le Mans champion Carroll Shelby (Matt Damon) to design a racing supercar for the profitable but stolid Ford company that will rival the unprofitable but glam Ferrari fleet that reigned over race tracks at the time. Along the way Mangold and screenwriters Jez and John-Henry Butterworth have their boisterous way with Sixties geist, with family and friendship, and above all with the case for passion over profits.

As played with relish by Tracy Letts, Henry Ford II is an old-school autocrat whose boorish autocracy thinly veils a deep insecurity as the son of a successful, overbearing father. Entranced by the prospect of beefing up the company's dull image as a mass producer of sensible family sedans, Ford assigns oversight of the race car program to Leo Beebe (a very good Josh Lucas in very bad hair), a corporate stuffed shirt who gets in Shelby and Miles' way wherever possible. The firm's true visionary is the forward-looking Lee Iacocca (Jon Bernthal), a son of the working class who sees the cultural winds blowing away from post-World War II austerity toward a new generation hungry for speed and glitz. While Ford interferes, tinkers, and loses interest by turns, Iacocca cunningly steers the ship toward Shelby and Miles' efforts to craft a car that will win not only Daytona but the coveted Le Mans trophy.

Front and center of this exuberantly overdrawn ensemble are two fractious, very different men welded together by mutual obsession. When his racing career is abruptly halted by a heart condition, Shelby turns car salesman and designer. When his cars, built by a team of mechanics headed by Miles, perform well against the Ferrari fleet at Le Mans, he's recruited by Ford to build a model that will best the Italians'. A former war hero and a brilliant driver and mechanical trouble-shooter, Miles is both Shelby's trump card and a thorn in just about everyone's flesh, his own included. "He's difficult but good," Shelby assures Ford in a massive double understatement.

Miles is as truculent, uncompromising, and congenitally furious as Shelby is wily about how to handle the vain, clueless Ford while he maneuvers in back with Iacocca. Where Shelby understands how to forge strategic alliances, the poetically profane Miles offends everyone and thinks nothing of hurling a wrench at his partner when crossed. The role is made for Bale, and though the actor's ordinarily uncanny mastery of accents veers oddly here between Cockney and Miles's native British Midlands, he's clearly having a blast as a monomaniacal speed racer unconsciously at war with his instincts as a devoted husband and father.

A populist sports picture from the get-go, Ford v Ferrari is dotted with race scenes that build toward a bravura climactic sequence of the 24-hour race at Le Mans that's so drawn-out and filled with obstacles, it feels as though it's unfolding in real time. Its outcome is a spoiler, but for a brief, show-stopping moment, Miles becomes someone he could never sustain over the long haul: a team player.

Notwithstanding its catchy title, Ford v Ferrari is less about a rivalry between two giants of the automobile world than about the struggle between two seemingly marginal individualists who insist on doing things their way for the love of it. That's the American way, at least in the movies, but this wildly entertaining film — a magnificent thrill even for those of us who know nothing and care less about car racing — sneaks in between the lines to make the case for craft. "You can't win a race by committee," Shelby tells Ford. If the CEO hadn't headed out early for dinner in his 'copter, he'd have learned that you might, however, get there with a dedicated team of persevering nutballs.