Accessibility links
Review: Revenge Against A Lush Backdrop In 'Queen Of The Conquered' In their new novel, Kacen Callender builds a vast, immersive landscape based on the colonial history of the Caribbean, but it's their morally conflicted heroine who will really hook readers. 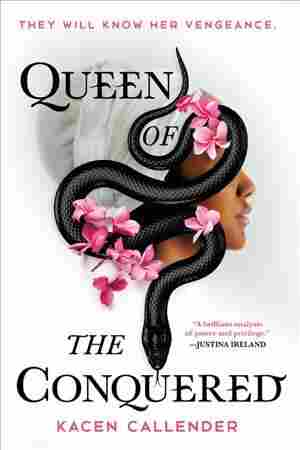 Queen of the Conquered

Revenge is the most primal of motivations, and as such, it's the basis of much fantasy literature. In Queen of the Conquered, Kacen Callender's debut novel for adults, the author wields revenge with supernatural skill. But that's not all they do: Callender also weaves a vast, fictional backdrop that's based on the colonial history of the Caribbean, a refreshing break from the stereotypical, pseudo-European setting of most epic fantasy. But rather than scatter its narrative across numerous characters and points of view, Queen of the Conquered effectively concentrates its entire focus on one character, Sigourney Rose — a black woman and deposed noble with strange abilities who has the most profound of axes to grind against her island's Norse-like conquerors.

On the chain of islands known as Hans Lollik, colonizers have established a brutal peace — or so it seems on the surface. Beneath calm plains of sugarcane writhes a land unsettled by spilled blood and a history of savage suppression engineered by a ruthless ruling class. Slavery is Hans Lollik's dominant economic system, and wholesale torture and mass murder are used to keep the slave class down; slaves aren't even allowed to read, with the punishment being blindness, and the lower class lives in the shadow of a massacre 20 years prior that left an entire plantation dead as a warning to the surviving slaves. Accordingly, the rulers of the islands find themselves conniving for ultimate power when a struggle for succession erupts. As lush as Hans Lollik seems on the surface, it's rotting at its core.

'The Deep' Sings With Many Voices

Sigourney is a member of Hans Lollik's native nobility, but her family was slaughtered when she was a girl, hence her thirst for revenge. But things aren't that straightforward. She possesses a rare ability, or "kraft," that enables her to read and control minds, and the chaos of the succession gives her the opening she's been waiting for, even as she finds herself up against assassination plots, political machinations, and the most dangerous person she can imagine: someone who can resist her formidable kraft. As a net of alliances and betrayals tightens around her, Sigourney must contend with the secrets of her history as well as that of her homeland — not to mention the double-edged sword of retribution.

'Queen' is not a pretty story, but it's told in gorgeous strokes of color and emotion, rendering even the most disturbing scenes of horror and loss with haunting insight.

Callender was born on St. Thomas, and their kinship with the Caribbean comes into vivid resolution in Queen. Their worldbuilding is meticulous and immersive, from the texture of the foliage to the devastating backstory of colonization. But it's Sigourney's first-person, present-tense perspective that captivates most deeply. Morally conflicted and viscerally impactful, her voice is a thing of lean poetry that's made all the more dimensional by her ability to peer into the thoughts of others — and to influence their actions. But that ability is not infallible, and Callender's masterful reveal of both Sigourney's inner turmoil and the magical world within her world dovetail beautifully. Queen is not a pretty story, but it's told in gorgeous strokes of color and emotion, rendering even the most disturbing scenes of horror and loss with haunting insight.

Queen is the opening volume of a series titled Islands of Blood and Storm, and Callender leaves this first installment open for the inevitability of plenty more story while arriving at a stunning, satisfying conclusion. It's a fine balancing act, and the book's absorbing setting, captivating lead, and relevant themes of race and class complement each other with alternating delicacy and savagery. At turns philosophical and feral, Queen of the Conquered represents the scope and spectacle of the fantasy genre with a vengeance.