Accessibility links
Marie Yovanovitch, Ex-Ambassador To Ukraine, To Testify In Impeachment Inquiry The diplomat will be the sole witness Friday, the second day of public testimony in the impeachment inquiry. State Department colleagues say she was removed after a slander campaign by Rudy Giuliani. 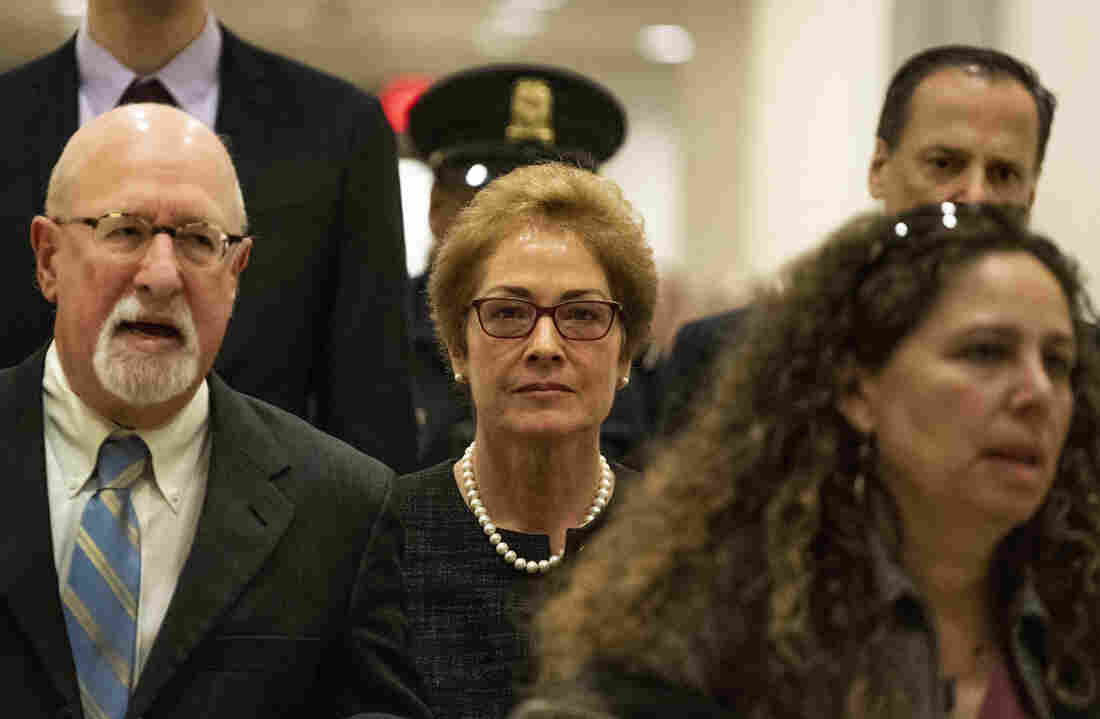 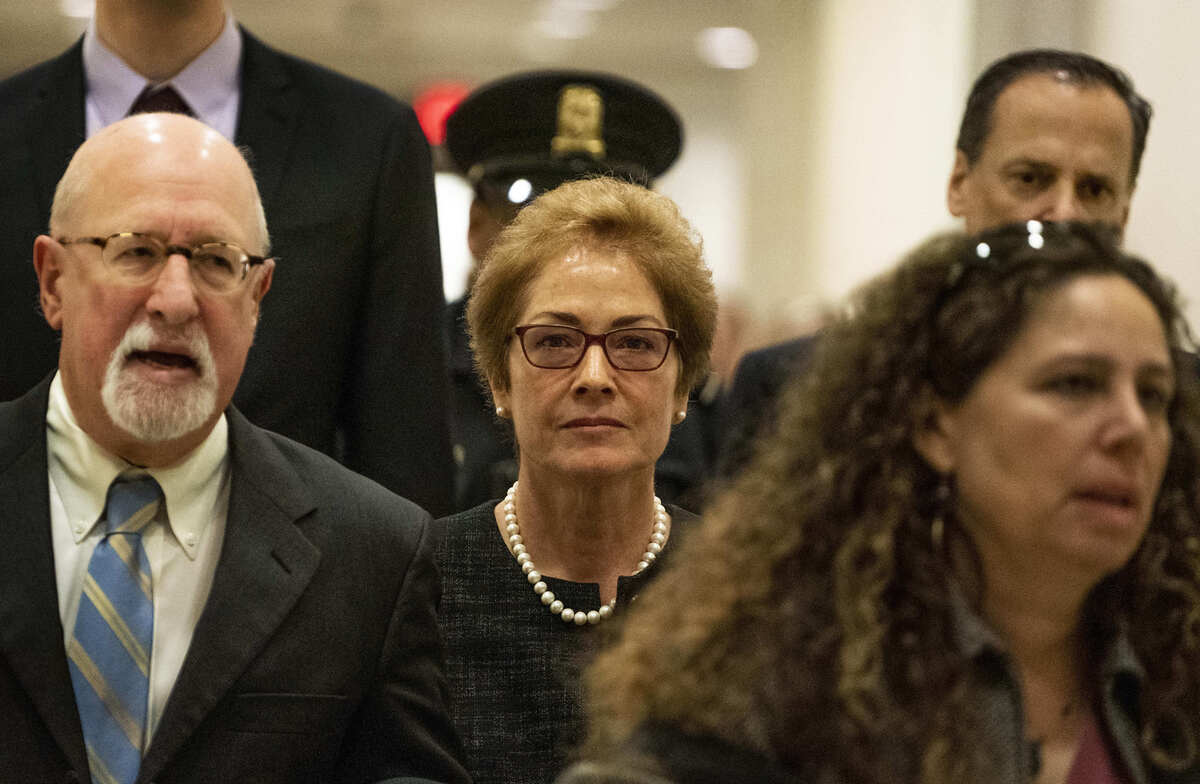 Former U.S. Ambassador to Ukraine Marie Yovanovitch arrives on Capitol Hill on Oct. 11 to appear before lawmakers in closed-door questioning related to the impeachment inquiry into President Trump.

When the U.S. ambassador to Ukraine was abruptly removed from her post this year, some Democratic lawmakers called it "a political hit job." Now the congressman in charge of the impeachment inquiry into President Trump is making the case that Marie Yovanovitch's ouster is part of the story of a president abusing his power in relations with Ukraine.

Yovanovitch will be the sole witness Friday, the second day of the inquiry's public hearings over whether Trump used military aid as leverage to pressure Ukraine into investigations that would benefit him politically.

Marie Yovanovitch was the U.S. ambassador in Kyiv from August 2016 to May of this year, when she was removed and ordered to return to Washington. State Department colleagues say she was withdrawn following a campaign of slander led by Rudy Giuliani, the personal lawyer for President Trump.

In the transcript of her private testimony in the impeachment inquiry last month, Yovanovitch says she was informed of her removal by Deputy Secretary of State John Sullivan.

"He said that the president had lost confidence in me and no longer wished me to serve as an ambassador. He added that there had been a concerted campaign against me and that the department had been under pressure from the president to remove me since the summer of 2018," Yovanovitch told lawmakers. "He also said that I had done nothing wrong and that this was not like other situations where he had recalled ambassadors for cause."

In those many hours of testimony, Yovanovitch offered a dramatic picture of her ouster.

She said she first learned that Giuliani was campaigning against her from a Ukrainian official who told her to "watch [her] back."

In late April, a colleague also warned her that she was at risk.

"She said that there was a lot of concern for me, that I needed to be on the next plane home to Washington," Yovanovitch said.

Diplomats were accustomed to criticism from Ukrainians or Russians who didn't like their messages, said George Kent, deputy assistant secretary of state for European and Eurasian affairs. But Giuliani's campaign against Yovanovitch was different, said Kent, who was the ambassador's deputy in Ukraine.

"It was unexpected and most unfortunate to watch some Americans — including those who allied themselves with corrupt Ukrainians in pursuit of private agendas — launch attacks on dedicated public servants advancing U.S. interests in Ukraine," Kent told lawmakers Wednesday on the first day of public testimony.

Kent testified that corrupt Ukrainian prosecutors who had their own ax to grind were feeding bad information to Giuliani.

"They were now peddling false information in order to exact revenge against those who had exposed their misconduct, including U.S. diplomats, Ukrainian anti-corruption officials and reform-minded civil society groups in Ukraine," he said.

Rep. Adam Schiff, D-Calif., who is leading the impeachment inquiry, said sidelining Yovanovitch set the stage for Giuliani to advance the president's personal and political interests.

Republicans dismiss that argument, saying the president has the authority to recall any ambassador for any reason.

"So you agree with me that we shouldn't impeach a president for exercising his constitutional authority," Ratcliffe said.

"I'm here as a fact witness to answer your questions," said Kent. "Your constitutional obligation is to consider the evidence before you."

Former U.S. diplomats have been outraged by the treatment of Yovanovitch, who is still a State Department employee.

Tom Countryman, who spent 35 years in the foreign service, said ambassadors serve at the pleasure of the president, but the president's rights are not unlimited.

"He's got the authority to do it," Countryman said of Trump's removal of Yovanovitch. "But if he exercises the authority for the purpose of extorting something from the government of Ukraine, I would certainly call that an abuse. But that's the judgment that the Congress has to make," he said in an interview.

Another former career diplomat, Nancy McEldowney, was furious that
Secretary Mike Pompeo's State Department has not supported Yovanovitch, even after a rough call log of a July 25 call between Trump and Ukraine's new president in which Trump said the ambassador would be "going through some things."

"Ambassador Yovanovitch was told to watch her back by the interior minister in Ukraine, who's responsible for the intelligence and law enforcement services. All of this considerable intimidation that has been imposed on these people. And yet they come forward because they feel duty bound and honor bound to tell the truth," said McEldowney, who now is at Georgetown University's Walsh School of Foreign Service.

She said public servants are putting their careers, privacy and personal safety at risk.

Democrats on the Senate Foreign Relations Committee are warning the administration not to punish State Department officials who testify.

State Department leadership "has focused on preventing and dissuading its personnel from providing information and testimony to Congress. Many have decided, boldly, courageously, to stand up and testify nonetheless—at great personal, financial, and reputational expense," 10 senators wrote in a letter on Tuesday to the deputy secretary of state and undersecretary of state for management.

The senators noted that they were addressing the letter to two of Pompeo's top aides rather than to the secretary of state himself because, they said, Pompeo's "silence to date speaks volumes. He has failed to stand up for his Department's own people."