Accessibility links
Book Review: In 'A Warning,' An Invisible Hand Rings A Somber Alarm President Trump, we are told in this soon-to-be-published book, has destroyed the guardrails thoughtful people tried to erect around him. Further, he has banished nearly all those thoughtful people. 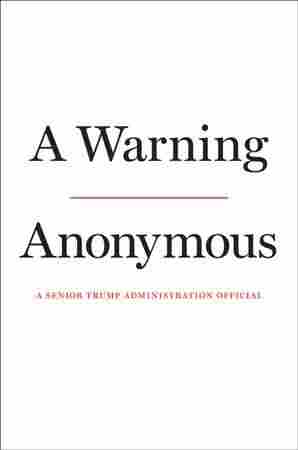 The book jacket for A Warning is appropriately stark. The title and "Anonymous" loom up in high contrast black-and-white, with "A Senior Trump Administration Official" lurking just below — in red.

On its first page, in a bid to make news, the book says disillusionment was so great in the first two years of President Trump's administration that "top advisors and cabinet-level officials contemplated ... resigning en masse to call attention to Trump's misconduct and erratic leadership."

They did not, we are told, because they feared it would only make things worse. So they stayed, and sure enough, things got worse.

How much worse? We are told the president has no interest in learning enough about how the government works to govern. Beyond that, he actively seeks to widen and deepen divisions to serve his own ends.

That is why, the author tells us, so many of the well-known members of Trump's first-term team have already departed. We are told that what this author first described (in a September 2018 op-ed in The New York Times) as a resistance within the administration has now all but collapsed.

These were people who joined the new administration in 2017 not from the Trump campaign but from a world of Republican loyalty and relevant experience. They found kindred spirits in the new White House, for a time, and thought they could direct the new president, perhaps finding useful bounds for his boundless energy.

What's In The Anonymous Official's 'A Warning'

The author provides no names, labeling them not the "Deep State" but rather the "Steady State." But we do see a hint at one point when the author refers to a group of nine within the first Cabinet who had been senators, governors, generals or chief executive officers. Six are now gone; one is leaving at year's end. But we have no indication any were, or were not, among the resisters.

Nor do we know at this point who wrote this book, and that will be reason enough for some to ignore it.

The author presents as a patriot and a scholar, either a moderate-to-conservative Republican or someone adept at aping that persona. Most chapters begin with a quotation from a former Republican president, and the author cites Trump's treatment of the late Arizona Republican Sen. John McCain as the trigger event for turning against Trump. Within weeks of McCain's death, the author's op-ed had appeared in the Times.

The author reports voting for Trump in 2016, despite misgivings, firmly believing the alternative (Hillary Clinton) would be worse.

This slim volume is the author's mea culpa, projected well past personal apology to the sounding of a national alarm. The president, we are told, has destroyed the guardrails thoughtful people tried to erect around him. Further, he has banished nearly all those thoughtful people. We are left to assume this does not include the author, yet. (We are told that Trump appointees keep a prepared resignation letter on their desk or laptop.)

Despite being unwilling to sign the final product, the author pleads with us to consider the ideas and observations in it on their own merits, without personalizing the conflict with the president.

That argument, plus the lure of a look under the hood of the Trump administration, has led the publisher to order a reported first printing of half a million copies. The book is set to be released on Nov. 19.

Who will buy it? Probably many who have already reached their own conclusions about Trump, and some who have seen previous tell-all books that try to take us inside the White House. (This one is this reviewer's ninth such read.)

At this point, it's hard to imagine a White House narrative with real shock value — unless it could sell a vision of this White House as a happy workshop of harmonious cooperation.

What is different here is the near-total absence of gossip and the sustained presence of surprisingly high-minded, intellectual discussion. The author justifies being anonymous by citing the American icons who published newspaper op-eds supporting ratification of the Constitution in the 1780s using the shared pen name of Publius. (Their real names were Alexander Hamilton, James Madison and John Jay.)

This reference to what are called the Federalist Papers is usually as academic as writers dare to get. But the author of A Warning is just getting warmed up. Next up is the ancient Roman statesman Cicero and his recitation of virtues desired in a leader. These include wisdom, discernment, mercy, justice and the love of learning and truth. It's a high bar for anyone, let alone a successful politician, and it seems rather tendentious to apply it here.

The author makes a closer connection with another classical reference, discussing how the ancient Athenian democracy dealt with the demagogue Cleon, a popular orator who appealed to base instincts and anger. The none-too-subtle parallels with Trump require little imagination.

This is not a book about impeachment or the current proceedings in Congress, which have progressed since the book went to press. But when reading here of Trump's willingness to defy Congress, we get a specific mention of funds for Ukraine:

"They'd explain to him that only Congress could make those cuts. He'd say he didn't care and do it anyway. ... In other cases he thought of the funds as bargaining chips, as in the case of money earmarked by Congress to go to Ukraine, and tried to pause the funds for whatever purpose suited him at the moment, perhaps until he got something he wanted in return."

That passage may interest the impeachment managers on Capitol Hill. But the author does not treat impeachment as a serious prospect, and not only because the Republican Senate would be unlikely to go along. The author fears Trump would simply reject a negative verdict, call it a "coup" and resist removal. Similarly, a narrow defeat next November might not be enough to ensure a new occupant in the Oval Office, the writer suggests.

In the end, the author's ultimate question about Trump and Trumpism is: "Does he reflect us?" In other words, was America deceived in 2016, or did we actually want just what we got? And taking it to the present and 2020, do we — or at least a plurality of us — want to empower him further with the green light of reelection?

Clearly, the author has made a call on that one:

"I cannot overstate the consequences of re-electing Donald Trump. I've seen the impact of his leadership on our government and country, up close and all too personal. The Trump administration is an unmitigated catastrophe[, and] whatever benefits we may have gained from individual Trump policies are vastly outweighed by the incalculable damage he has done to the fabric of our republic."

To add drama to this final appeal, the author compares the challenge before the voters to that confronting the passengers on United Flight 93 on Sept. 11, 2001. Those passengers assessed their situation, saw what they had to do and went forward.

In this case, Anonymous calls on Americans to go to the polls, where they — like the author — can cast a secret ballot.