Accessibility links
'Game Of Thrones' Fans Tour Northern Ireland: 'Rain Or Cold, They Keep Coming' The HBO series ended in 2019, but superfans still flock to the spots where their favorite scenes were filmed. According to one screen tourism expert, that's helped Northern Ireland reinvent itself. 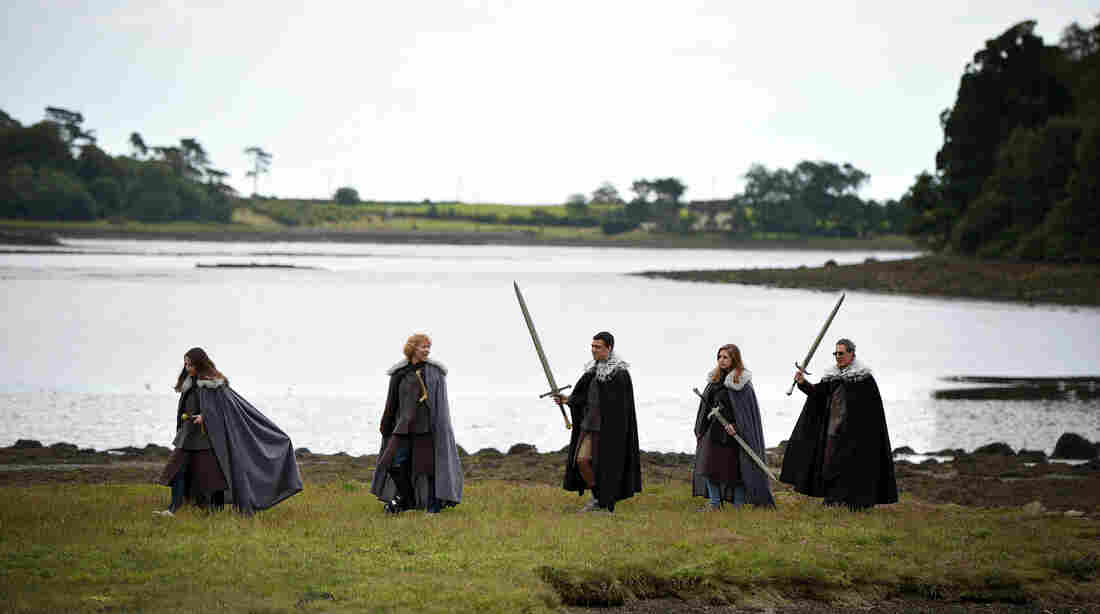 A family from Washington, D.C., participates in a Game of Thrones tour in Belfast, Northern Ireland, in August 2015. Charles McQuillan/Getty Images hide caption 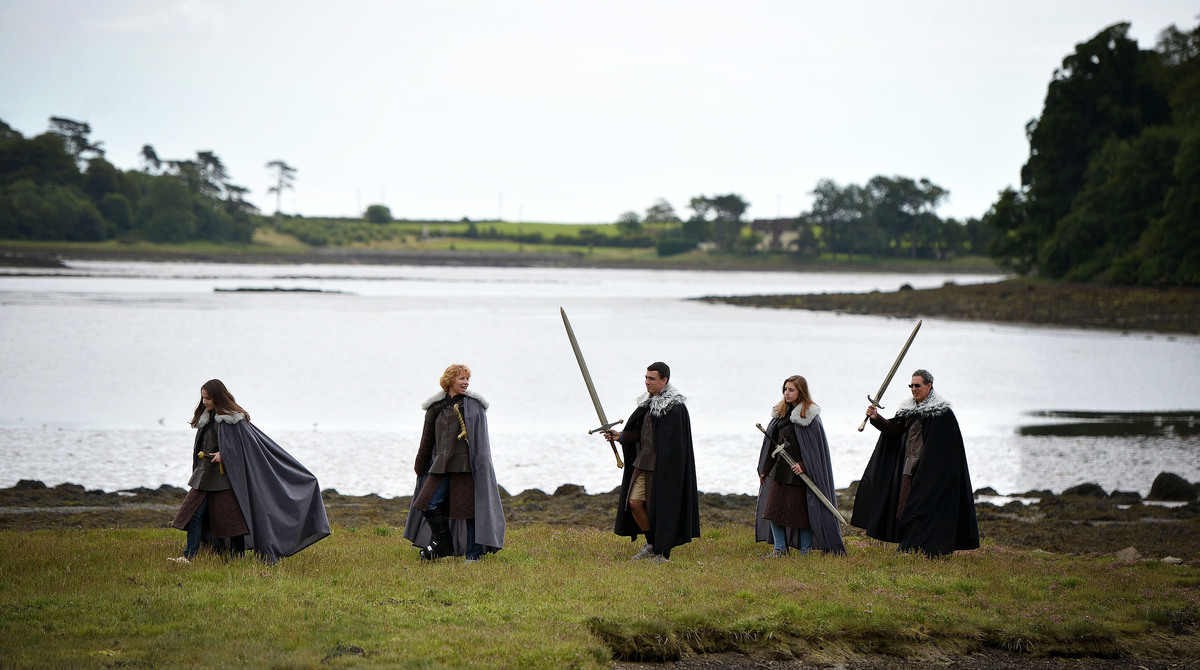 A family from Washington, D.C., participates in a Game of Thrones tour in Belfast, Northern Ireland, in August 2015.

Thelma Okocha had never thought about going to Northern Ireland. Yet here she was, standing on a rocky strap of mossy shore, in the rain. For her, this is hallowed ground.

"Euron Greyjoy almost killed Jaime Lannister here," says Okocha, a 29-year-old business intelligence developer who works in New York. Then she motions to a nearby cave where her tour group is huddled. "And that's where Melisandre gave birth to that demon shadow that killed Renly Baratheon," she says, "I can't believe I'm here."

By "here," she means Westeros, the fictional land where the wildly popular HBO series Game of Thrones was set. Much of it was filmed in Northern Ireland. The show ended months ago, but superfans like Okocha are reliving it year-round as "set-jetters" — tourists who travel the world visiting the places where their favorite movies and TV shows were filmed.

"While they are set-jetting, they also see so much more than the set," says Thierry Joliveau, a professor of geography and geomatics at Université Jean Monnet de Saint-Etienne in France, who has studied set-jetting. "When my wife and I took the kids on a Harry Potter tour of England, we noticed so many people also discovering famous cathedrals and Oxford University. They walked out of fiction and into real life."

Set-jetting is trendy these days "because so much of what we perceive these days is based on what we see on screens," says Peter Bolan, senior lecturer at Ulster University in Northern Ireland, who wrote his doctoral dissertation on screen tourism. "You see it everywhere." 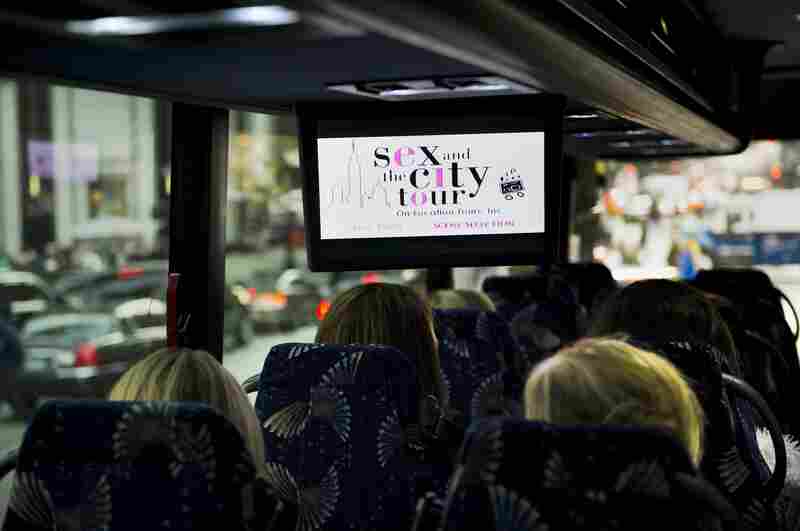 A busload of tourists on a Sex and the City tour of New York City ride down Fifth Avenue in November 2013. Stan Honda/AFP via Getty Images hide caption 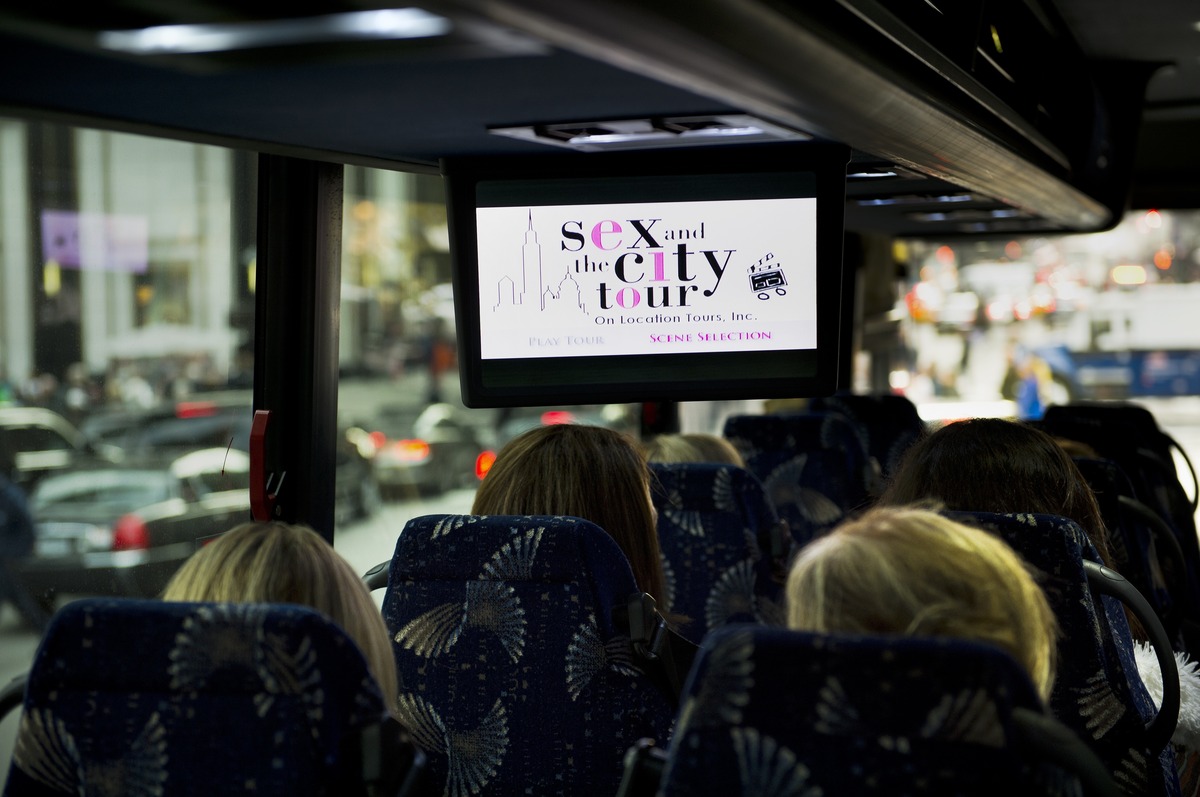 A busload of tourists on a Sex and the City tour of New York City ride down Fifth Avenue in November 2013.

There are tours of Sopranos and Sex and the City sites in New York, Lord of the Rings and Hobbit locales in New Zealand. Greek tourism got a boost from Mamma Mia, which was filmed on the island of Skopelos. Sound of Music buffs still come to Salzburg, Austria. Scotland even has an entire guide to set-jetting, which includes locales for the "Harry Potter" flicks, the James Bond movie Skyfall and TV shows like Downton Abbey.

But no show in recent memory has inspired the set-jetters like Game of Thrones, one of the most successful series in history. "These fans are possibly even more obsessed than the Star Wars crowd," says Bolan, estimating that 350,000 Game of Thrones fans are expected in Northern Ireland this year.

"That's hugely important to Northern Ireland economically, and it's particularly important at the current time because of looming things on the horizon like Brexit," he says. Northern Ireland, which is part of the UK, is expecting a big economic hit if the UK's divorce from the European Union is finalized next year.

After Avoiding The Country For Decades, Tourists Are Now Flocking To Northern Ireland

After Avoiding The Country For Decades, Tourists Are Now Flocking To Northern Ireland

The show was also shot in Croatia, Iceland, Malta and Spain and not all locales are thrilled about the rush of set-jetters. In Dubrovnik, Croatia, local officials are trying to ban new restaurants in the old walled city (or King's Landing) to keep tourists from flooding it.

But Northern Ireland wants more. "Screen tourism has enabled Northern Ireland to almost reinvent itself, in a sense," Bolan says. "Before Game of Thrones, tourists wanted to see sites related to The Troubles." (That's the bloody sectarian conflict between Catholics and Protestants that ended in 1998 with the Good Friday peace agreement).

"That's what I knew about Northern Ireland," says Okocha, the set-jetter from New York. "That and the fact the Titanic was built here." 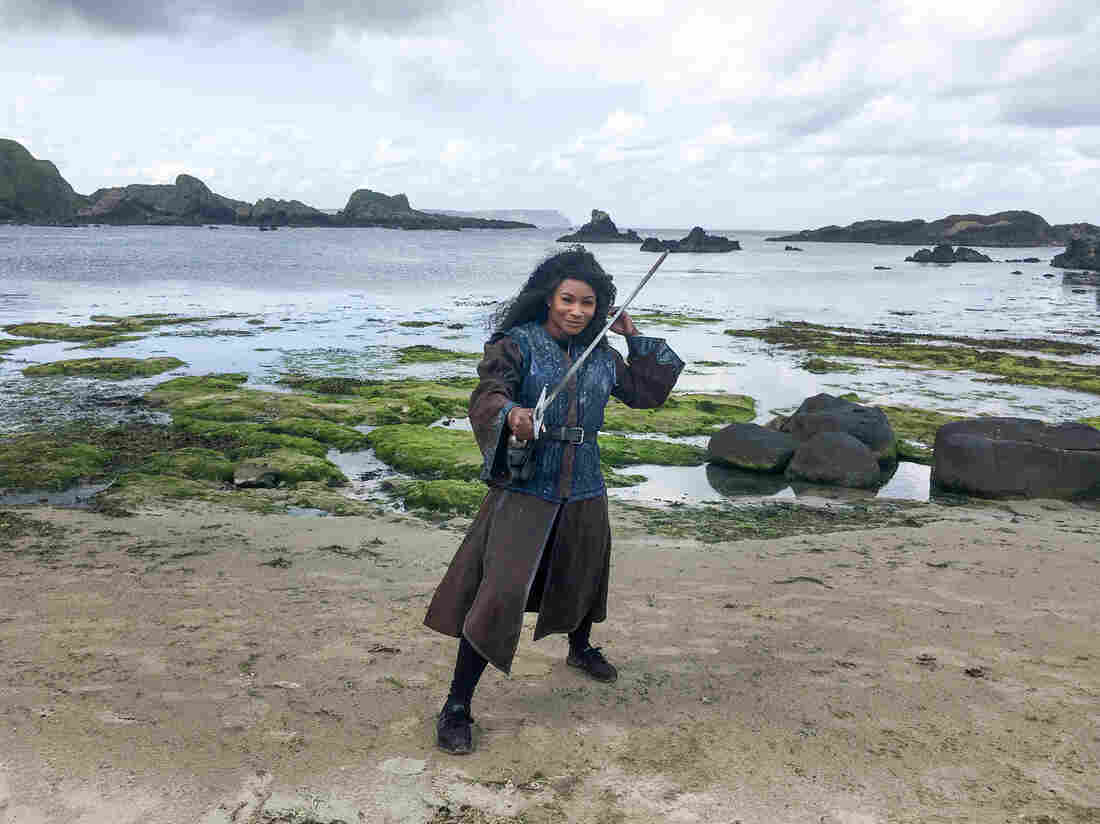 Thelma Okocha is a "set-jetter" from New York who traveled to Northern Ireland to see the locations where Game of Thrones was filmed. Joanna Kakissis/NPR hide caption 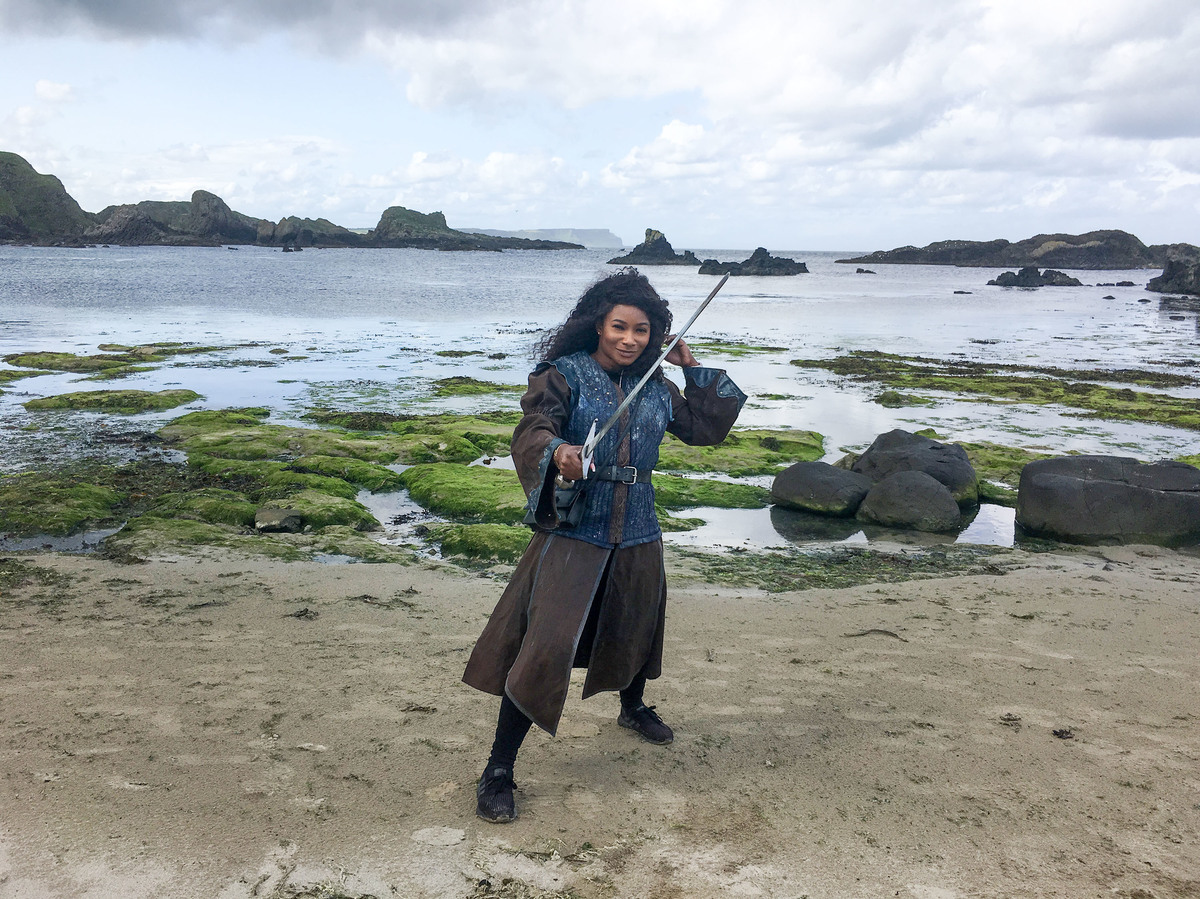 Thelma Okocha is a "set-jetter" from New York who traveled to Northern Ireland to see the locations where Game of Thrones was filmed.

Now Northern Ireland is also Westeros, a place where she could follow in the footsteps of her favorite Game of Thrones character, Arya Stark.

"She's fierce," Okocha says. "She didn't conform to what society thinks a woman should be like. She wanted to be tough. I love that."

She stands at the landing where Arya escaped a would-be assassin, then looks up to see the lush, craggy Irish coastline.

Along that coast is the fishing village of Ballintoy, where the local pub, The Fullerton Arms, is serving Arya Stark's favorite savory pies to a full house of set-jetters — including Okocha, a retired couple from Florida, Australian schoolteachers, an Indian management consultant and two sisters and their mom from Kuwait.

"It doesn't seem to stop," she says, referring to the tourist rush. "All year round, even in rain or cold, they keep coming."

Outside, set-jetters pose in front of a carved door depicting the dragon of the Targaryens. Tour guide Richard Hodgen snaps photos. "It really does fill my heart with pride that I get to see everybody here every day," he says.

Like many other Northern Irish, Hodgen was actually in Game of Thrones. He's tall, with a big bushy red beard, so he was the body double for the wilding Tormund Giantsbane, who chugged giants' milk.

This is such a relaxing beach. Almost makes you forget all the fake blood the Greyjoys spilled here.

Later, he guides the set-jetters to a windswept beach that was a setting for the Iron Islands. They don the leathery vests and cloaks of the Greyjoys. They wield real swords.

Shannon Jansz, 24, and Trevor Felix, 25, primary school teachers from Melbourne, Australia, pretend to sword-fight before stopping to watch the waves lapping on shore.

"This is such a relaxing beach," Jansz says. "Almost makes you forget all the fake blood the Greyjoys spilled here."

Behind them, more tourists dressed as Greyjoys arrive, roaring as they run to the shore, this time swinging plastic swords.

Winter is coming. So are the set-jetters.