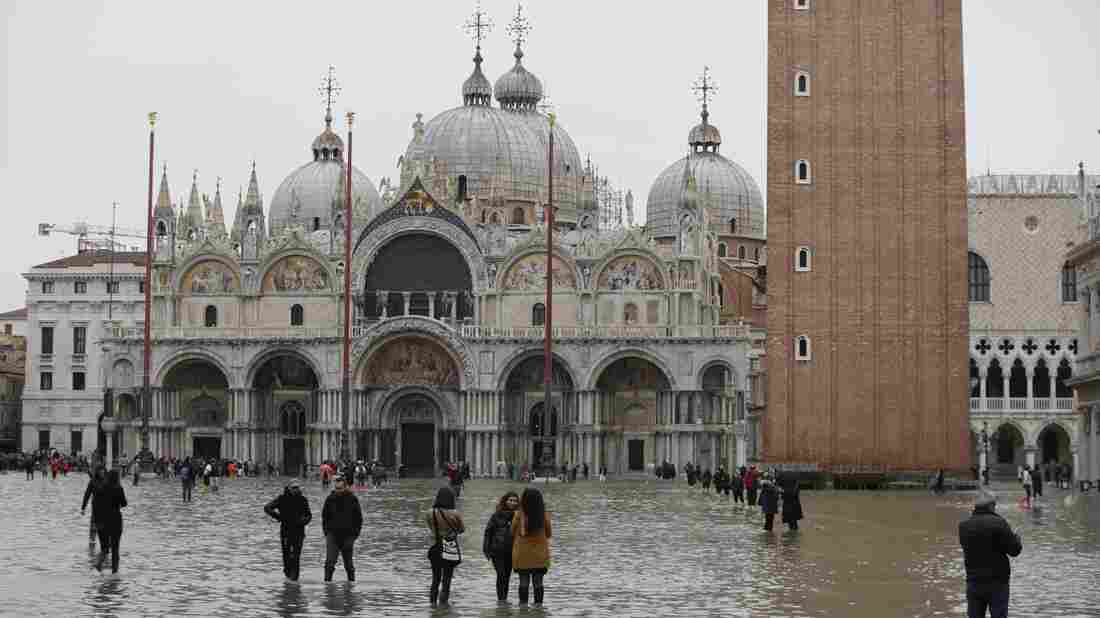 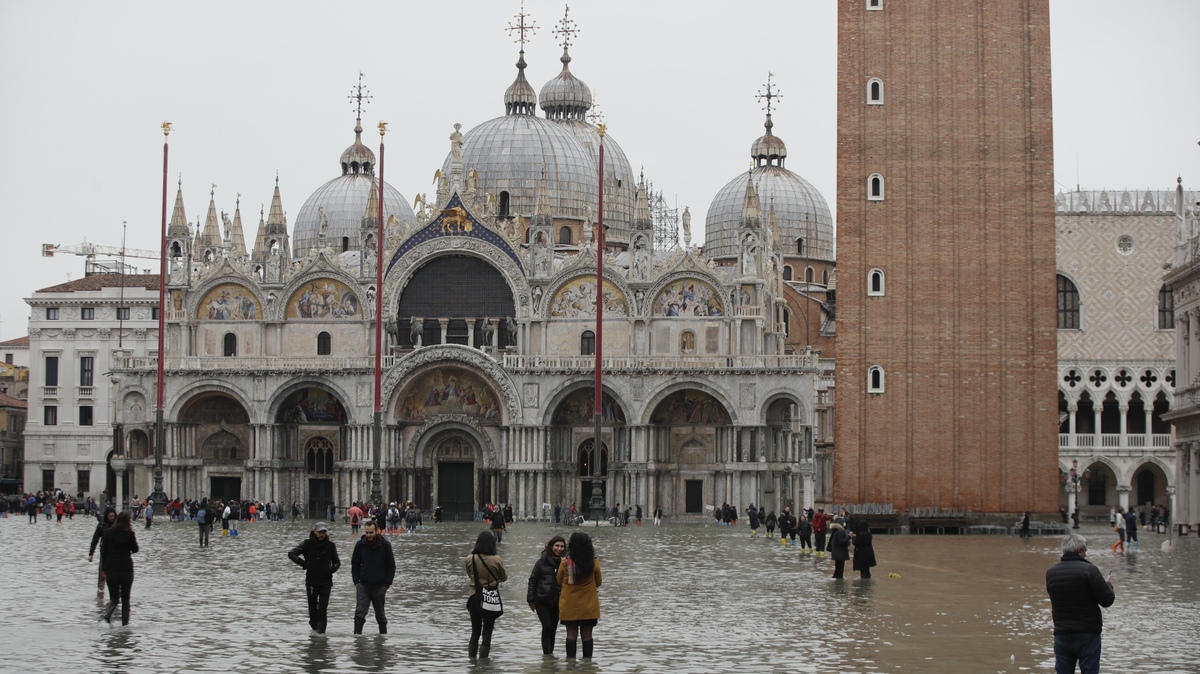 People in front of St. Mark's Basilica wade in flood water in Venice on Wednesday.

The Italian government declared a state of emergency Thursday in Venice following the city's worst flooding in over 50 years. On Tuesday, high tides allowed the high-water mark to reach 6 feet, 2 inches, just 2 inches less than the record measurement in 1966.

'Venice Is On Its Knees': Mayor Blames Worst Flood Tide In 50 Years On Climate Change

Waters rose again Thursday, although to a much lower height than previous days. Venice officials said water reached a maximum height of 3 feet, 8 inches early Thursday and heavy rainfall will continue to bring further floods into the city.

Italian Prime Minister Giuseppe Conte met with local officials Wednesday to organize relief efforts and survey damage, which he called a "blow to the heart of our country."

"It hurts to see the city so damaged, its artistic heritage compromised, its commercial activities on its knees," Conte said.

He later tweeted that the cabinet approved an emergency fund of 20 million euros ($22 million) that will be used to financially support the city and the population. He also said those with damaged homes will immediately receive 5,000 euros ($5,500).

Efforts to clean the city have already begun. The city's public utility, Gruppo Veritas, said 140 workers and 40 boats are collecting large amounts of debris swept onto the streets. Additionally, it said nearly a third of Venice's raised walkways were destroyed. 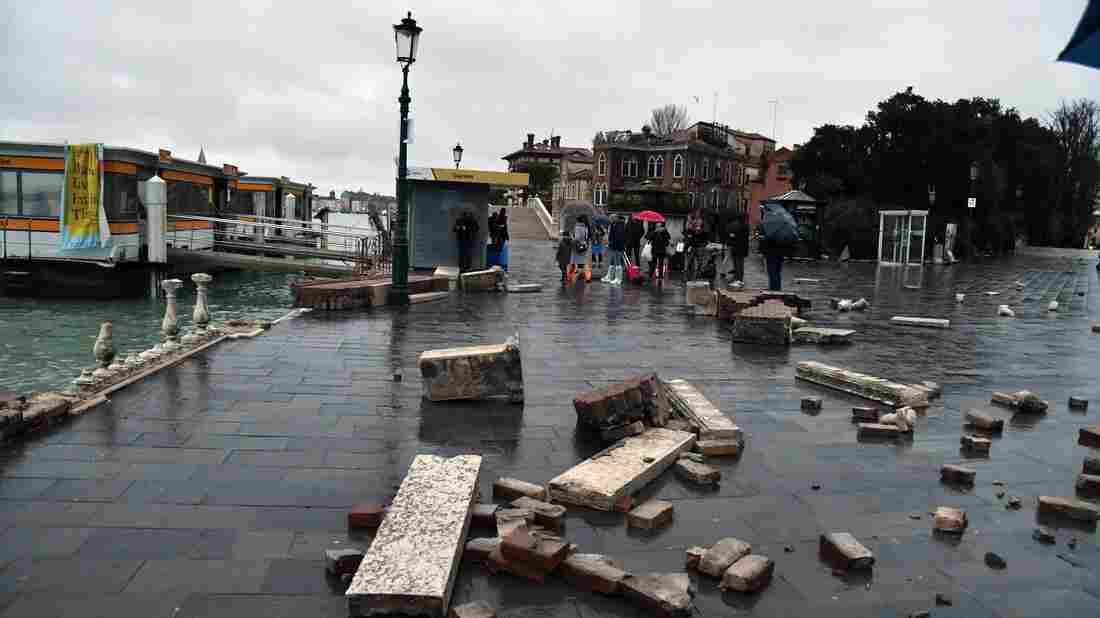 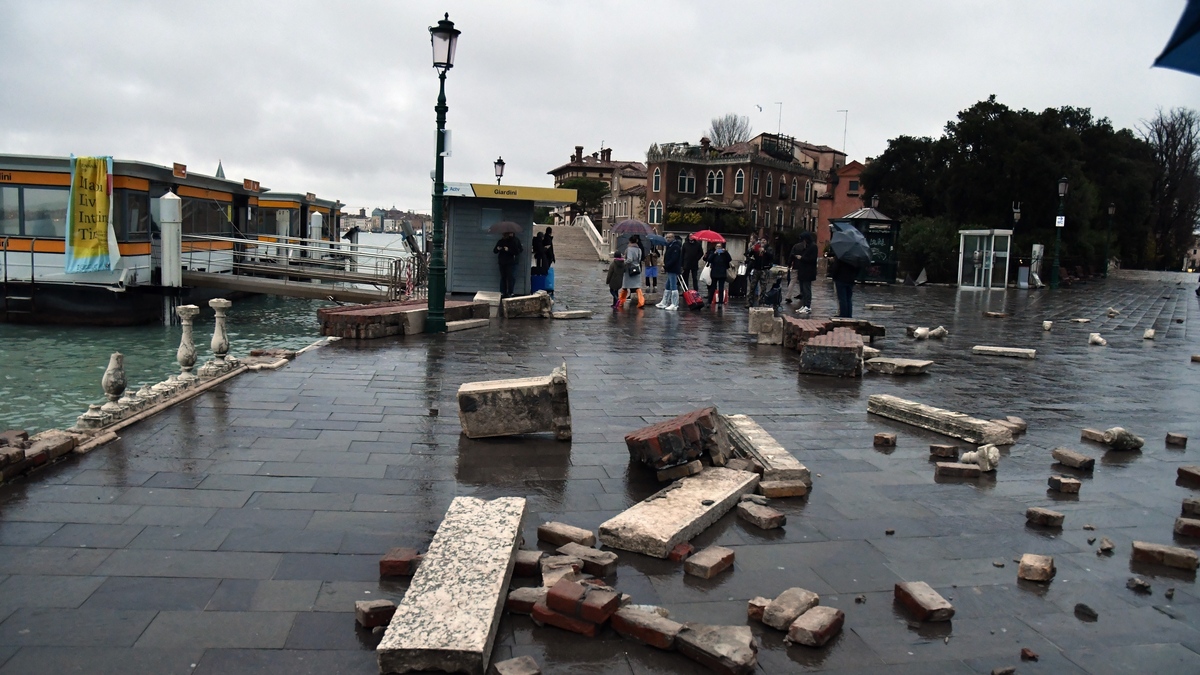 A dock, partially flooded, lies damaged in Venice on Wednesday.

"The Culture Ministry is sending experts to the magnificent St. Mark's Basilica - built more than a thousand years ago - to assess the state of its marble pillars, frescoes and mosaic pavement," NPR's Sylvia Poggioli reports from Rome.

Also damaged is the Acqua Alta Library — a famous bookstore ironically named after the Italian term for Venice's occasional tidal flooding. Hundreds of books were irreparably damaged, despite precautions made to fight flooding, according to Italian publication Libreriamo.

Venice has always been subject to flooding. A multibillion euro project of movable undersea barriers called MOSE is meant to protect the city from such floods, yet it remains unfinished due to cost overruns and corruption scandals.

Italian Transport and Infrastructure Minister Paola De Micheli said Thursday that MOSE will be operational by 2021, however experts say it will not be enough to deal with rising sea levels.