Accessibility links
Trump Releases Rough Transcript Of First April Call With Zelenskiy The White House released a rough transcript of a phone call Trump made to Ukraine's just-elected leader in April. It differs in key areas from how the White House described the call at the time. 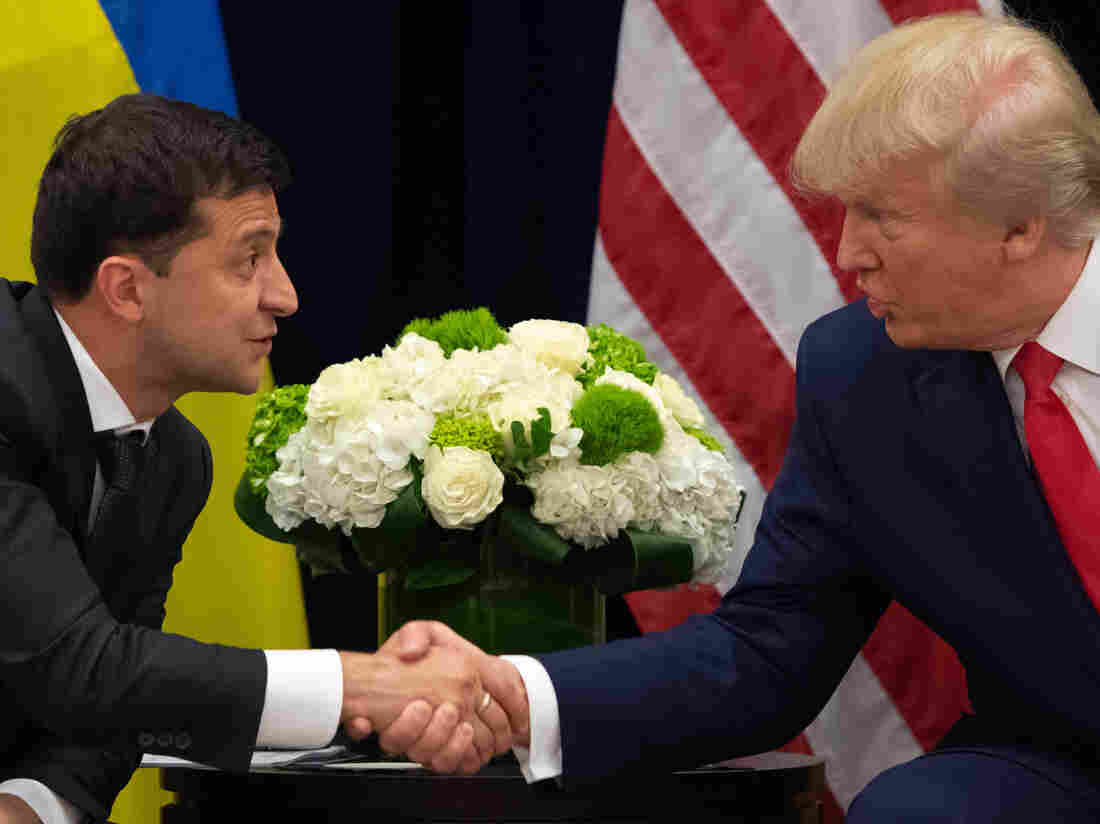 President Trump and Ukrainian President Volodymyr Zelenskiy shake hands during a meeting in New York on Sept. 25, on the sidelines of the United Nations General Assembly. Saul Loeb/AFP via Getty Images hide caption 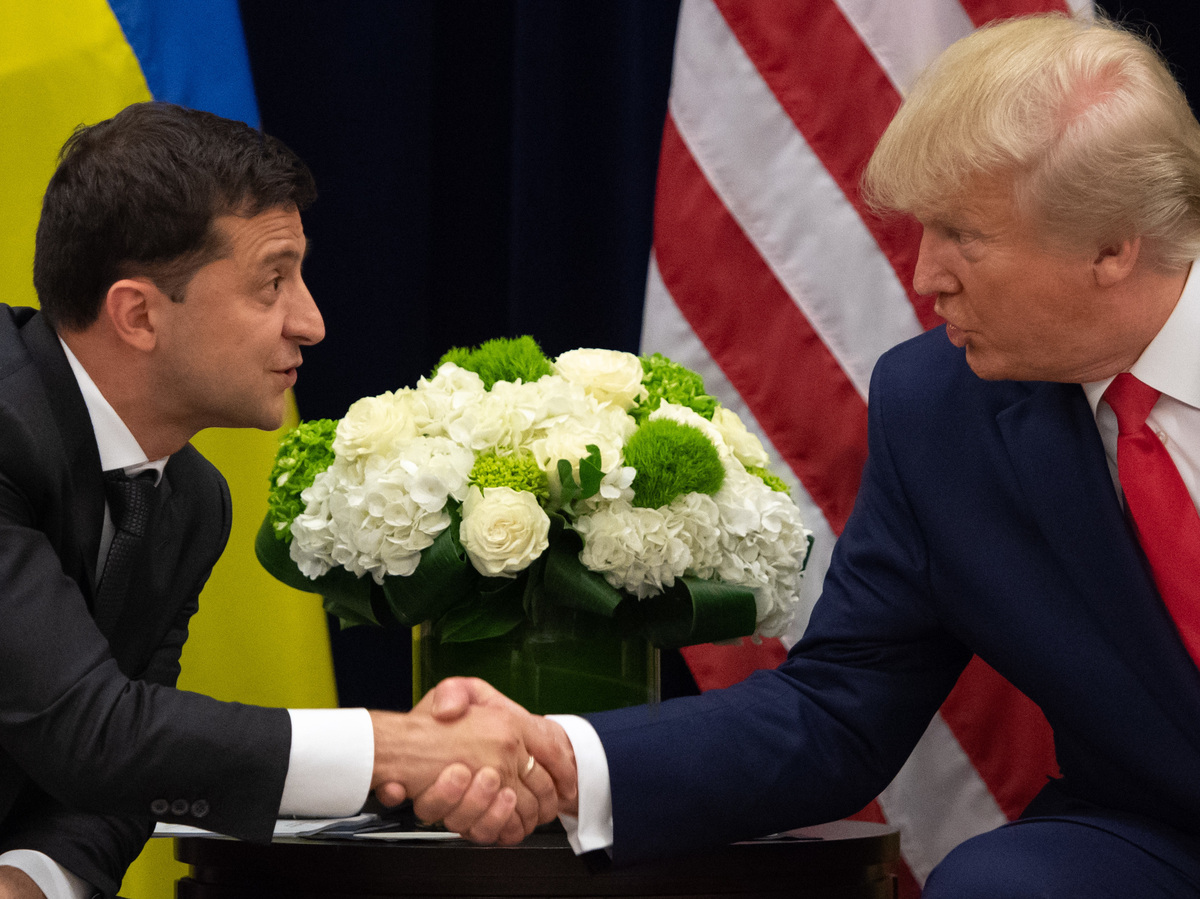 President Trump and Ukrainian President Volodymyr Zelenskiy shake hands during a meeting in New York on Sept. 25, on the sidelines of the United Nations General Assembly.

President Trump on Friday released the rough transcript of a brief, 16-minute congratulatory conversation he had on April 21 with Ukrainian President Volodymyr Zelenskiy, timed to coincide with the beginning of the second day of open hearings in the House impeachment inquiry.

It's the second such transcript released by the White House. In September, Trump released the rough transcript of his July 25 phone call with Zelenskiy, which is at the heart of the Democrats' impeachment push. The White House has said releasing the transcripts shows Trump had nothing to hide.

The rough transcript of the April 21 call differs significantly from the way the White House had initially described the conversation on the day that it happened.

"President Trump underscored the unwavering support of the United States for Ukraine's sovereignty and territorial integrity – within its internationally recognized borders – and expressed his commitment to work together with President-elect Zelenskyy and the Ukrainian people to implement reforms that strengthen democracy, increase prosperity, and root out corruption," the press statement said.

But in the rough transcript, Trump mentions neither U.S. support for Ukraine in its fight over territory with Russia, nor Ukraine's effort to address corruption.

White House spokesman Hogan Gidley said the April 21 statement had been prepared by the National Security Council's Ukraine expert. Lt. Col. Alexander Vindman, the NSC's Ukraine specialist, has provided closed-door testimony to the inquiry about the April and July calls. Vindman, who listened to the calls as they happened, is slated to testify at a public hearing on Tuesday.

Phone calls between U.S. presidents and foreign leaders are not recorded, but the White House develops a rough transcript of the call using automated transcription software and note takers who try to make the record as accurate and complete as possible. It is rare for these records to be released publicly.

At the impeachment hearing, Devin Nunes, the top Republican on the House Intelligence Committee, read the rough transcript out loud so that it became part of the public record.

"That was an incredible election," Trump said on the call, which he took from Air Force One. "I think you will do a great job. I have many friends in Ukraine who know you and like you."

The April call happened the night of Zelenskiy's election win and, according to testimony in the impeachment inquiry, the comedian turned politician was in a joking mood. Trump was upbeat, too. Trump even mentioned the Miss Universe pageant, which he used to own, saying Ukrainians always had great people.

In one serious moment, Zelenskiy emphasized Ukraine's independence. "We are an independent country, and independent Ukraine — we're going to do everything for the people," Zelenskiy said, according to the rough transcript.

Zelenskiy invited Trump to attend his inauguration and to visit his country to see it for himself. Trump said he would be sure to send "a great representative" to the event.

And then Trump invited Zelenskiy to the White House, an invitation Trump still hasn't followed through on. "When you're settled in and ready, I'd like to invite you to the White House," Trump said, according to the rough transcript. We'll have a lot of things to talk about, but we're with you all the way."

Actually setting a date for that White House meeting would become a central thread in what witnesses have described as a pressure campaign by Trump and his allies to get Zelenskiy to launch investigations that would benefit Trump politically. During the July call, Trump asked Zelenskiy to look into former Vice President Joe Biden's son Hunter and a debunked conspiracy theory about the 2016 election.

Those investigations were never launched, and Zelenskiy still hasn't gotten his Oval Office meeting, although Ukraine's leader did meet with Trump at the United Nations General Assembly in late September.

Impeachment Hearing FAQ: Who Will Testify And How The Questioning Will Work

After Nunes read the letter into the record, House Intelligence Chairman Adam Schiff said he thanked Trump for releasing the document — but urged the White House to release other documents and records that the committee had subpoenaed.

Trump has frequently used the refrain "Read the transcript!" when defending himself against allegations raised in the impeachment inquiry.

"The President took the unprecedented steps to declassify and release the transcripts of both of his phone calls with President Zelenskiy so that every American can see he did nothing wrong," White House press secretary Stephanie Grisham said in a statement.

I will be releasing the transcript of the first, and therefore more important, phone call with the Ukrainian President before week’s end!

The April 21 call had been a topic last month during Vindman's closed-door testimony. "The call was positive," Vindman said, noting Trump praised Zelenskiy for his victory. "The President expressed his desire to work with President Zelensky and extended an invitation to visit the White House."

Vindman testified that the contrast between the April and July calls was striking and rapidly apparent. "The atmospherics, the tone, indicated that [the July 25 conversation] was not going to be as positive a call as the April 21st call," Vindman said.

The Ukraine Impeachment Inquiry Begins A New Phase This Week: What You Need To Know

The Whistleblower Complaint Has Largely Been Corroborated. Here's How

Trump now says the more mundane April call is the "more important" of the two.

In releasing the April rough transcript, there is a risk the White House could put the differences between the two calls in stark relief. Trump has insisted his July conversation with Ukraine's leader was "perfect," though few Republicans have been willing to publicly agree with him.

"I'll release that too, if it's important to you," Trump said of the April call in a news conference on the day the White House put out the rough transcript of the July call.

In order to continue being the most Transparent President in history, I will be releasing sometime this week the Transcript of the first, and therefore most important, phone call I had with the President of Ukraine. I am sure you will find it tantalizing!