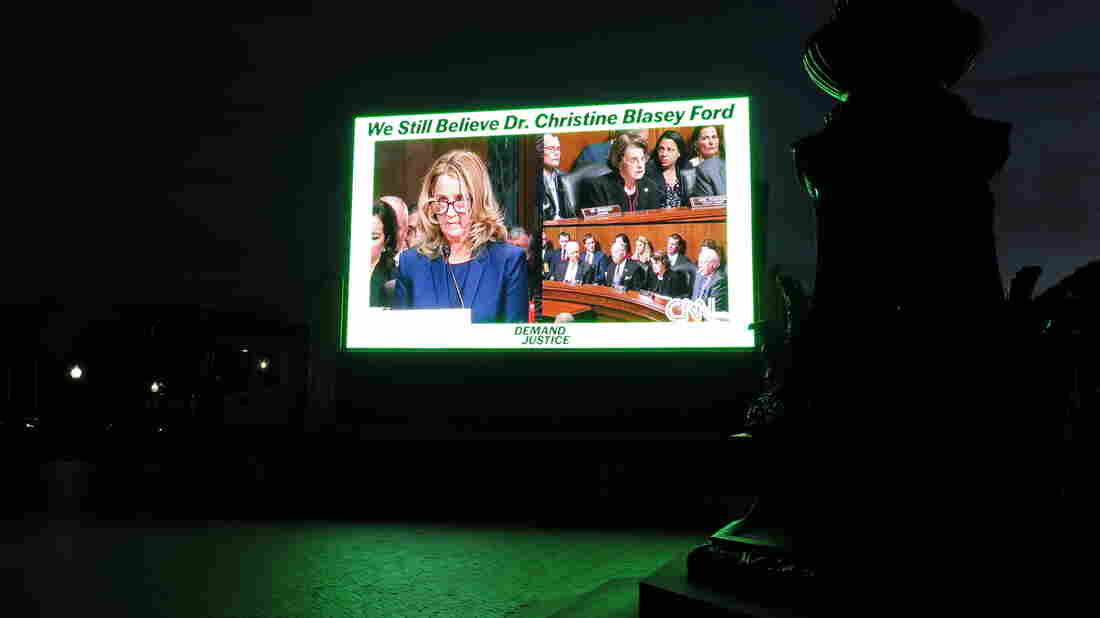 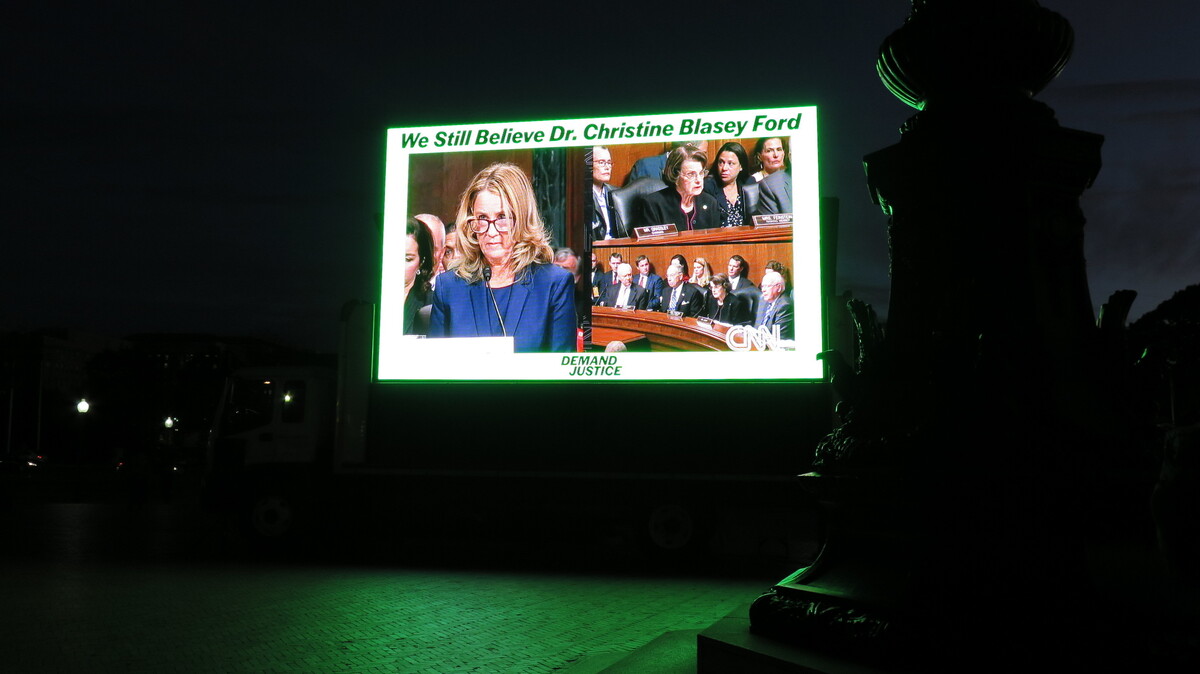 Christine Blasey Ford's testimony played on an 18-minute loop outside an appearance by Supreme Court Justice Brett Kavanaugh on Thursday.

A vast hall filled with members of the conservative Federalist Society on Thursday night welcomed Supreme Court Justice Brett Kavanaugh as a conquering hero, while outside on a large screen protesters played video from Kavanaugh's confirmation hearing of testimony by Christine Blasey Ford, the woman who accused him of sexual misconduct.

His appearance marked the first time since joining the bench that Kavanaugh addressed the group that played a key role in his confirmation process. Grinning with pleasure, he delivered an address that was largely a laundry list of people to whom he offered "gratitude" for securing his "new job" — as a justice on the nation's highest court.

"I signed up for what I knew would be an ugly process," Kavanaugh said. But, he quickly added, "maybe not that ugly."

It wasn't until Kavanaugh spoke about his youngest daughter's prayers during the confirmation hearings that his composure faltered.

"Matt Damon would have made it through this," said a choked-up Kavanaugh, drawing a large laugh from the crowd with his reference to the actor's portrayal of Kavanaugh on Saturday Night Live.

Kavanaugh's thank-you list included key players in the confirmation process, among them Sen. Mitch McConnell (R-Ky.) and former White House counsel Don McGahn. Kavanaugh said McGahn sent him video clips of the movie Miracle, about the 1980 U.S. men's hockey team and its unlikely bid for Olympic gold, to inspire him throughout the confirmation process.

Notably absent from Kavanaugh's list was the man who nominated him to fill Justice Anthony Kennedy's seat: President Trump. 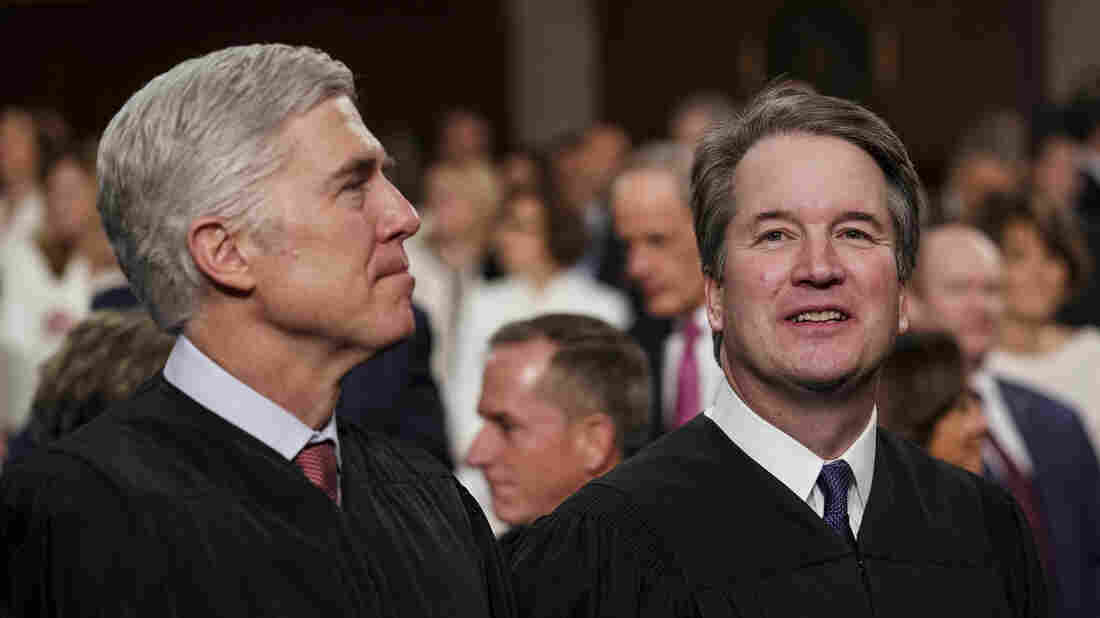 The two newest members of the Supreme Court, Associate Justices Neil Gorsuch, left, and Brett Kavanaugh watch as President Trump arrives to give his State of the Union address in February. Gorsuch and Kavanaugh clerked together for former Justice Anthony Kennedy, whose seat Kavanaugh now fills. Doug Mills/AP hide caption 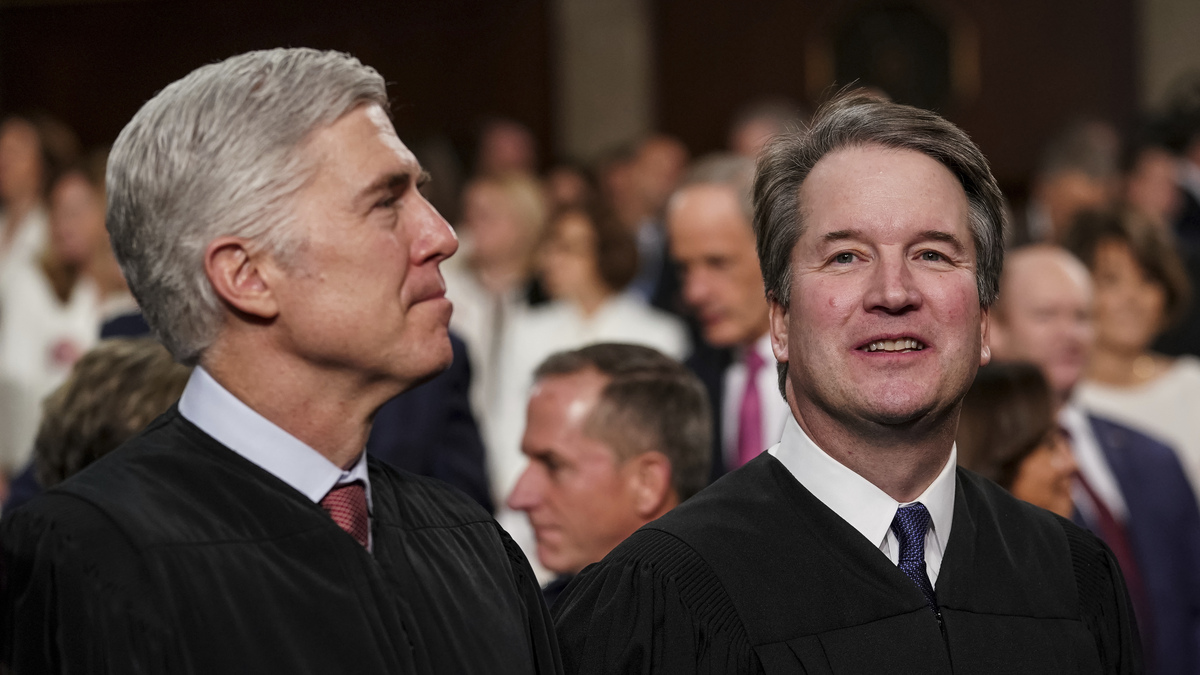 The two newest members of the Supreme Court, Associate Justices Neil Gorsuch, left, and Brett Kavanaugh watch as President Trump arrives to give his State of the Union address in February. Gorsuch and Kavanaugh clerked together for former Justice Anthony Kennedy, whose seat Kavanaugh now fills.

Kavanaugh made his remarks to an approximately 3,000-person crowd in Washington's Union Station, which had been transformed into a banquet hall.

Since then, Kavanaugh has largely remained out of the public eye, opting last year to attend, but not speak, at the annual Federalist Society dinner.

His appearance Thursday did not go off without a hitch. Protesters twice interrupted Kavanaugh's speech, the shrill sounds of whistles cutting through his words. At one point, there appeared to be a fight for control of the room's sound between the protesters' whistles and the crowd's applause.

In day-to-day life here in the nation's capital, where Kavanaugh was raised, people express both ardent approval and intense dislike for the justice. The Washington Post reported that Kavanaugh has been met with both insults and applause from other diners at a quiet French restaurant in his suburban Maryland neighborhood. 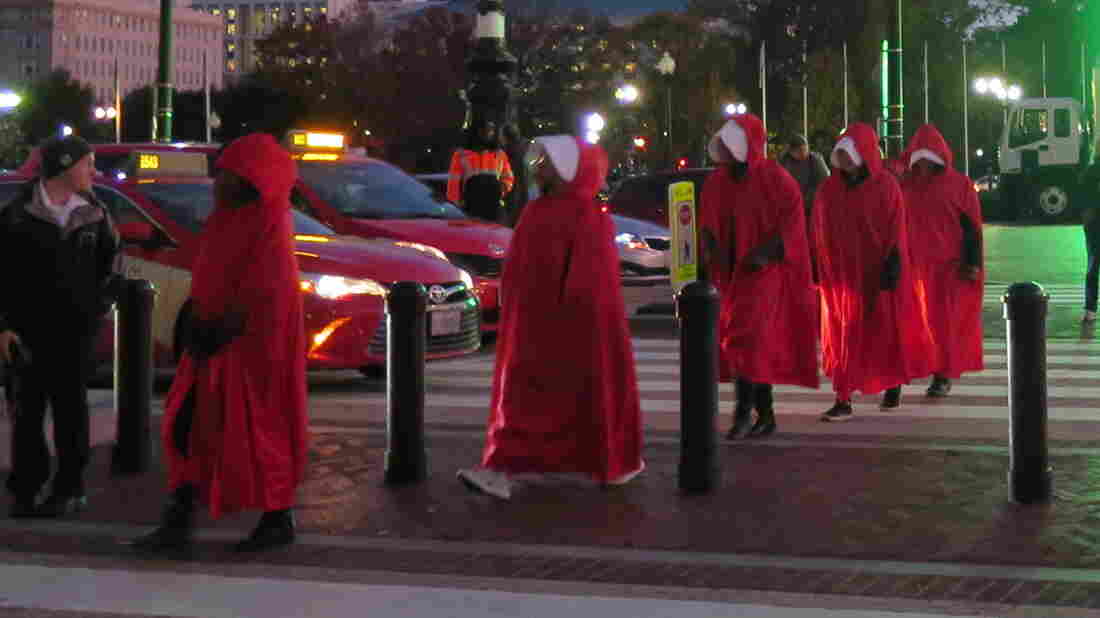 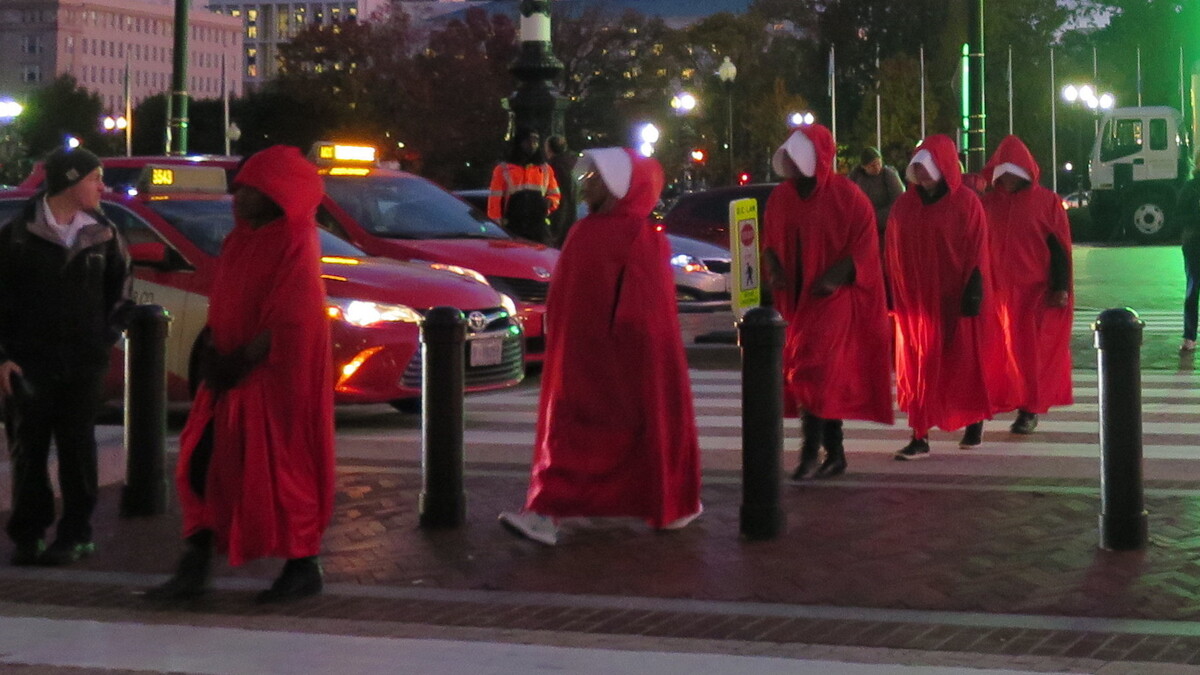 Protesters dressed as women from The Handmaid's Tale protest outside Justice Kavanaugh's speech.

Even at invitation-only, conservative-friendly events, Kavanaugh meets critics. "You should be ashamed," yelled a young woman at Kavanaugh at The Ronald Reagan Institute's celebration of Justice Sandra Day O'Connor. Kavanaugh had come to the event to listen to his fellow justices, Ruth Bader Ginsburg and Sonia Sotomayor, speak about the legacy of O'Connor's life as the first female Supreme Court justice.

But on Thursday night, as Kavanaugh addressed a packed hall that included some of his strongest supporters, he was largely met with the sound of sustained, fervent applause. This conservative crowd knew full well that Kavanaugh's confirmation means that they comfortably hold the majority on the Supreme Court. A court that, in this term alone, will hear cases on nearly every major flashpoint in American society, including: abortion, guns, LGBTQ rights, the environment, religion in schools and the future of DACA.

In his speech, Kavanaugh said he has learned being a judge "really is like being an umpire," a nod to Chief Justice John Roberts' famous confirmation hearing line about only calling "balls and strikes." This term will test that premise.