Accessibility links
Myles Garrett 'Indefinitely' Suspended For Hitting QB With His Own Helmet The Cleveland Browns' defensive end is suspended without pay "at a minimum for the remainder of the season and postseason" after starting a fight at the end of a game with the Pittsburgh Steelers. 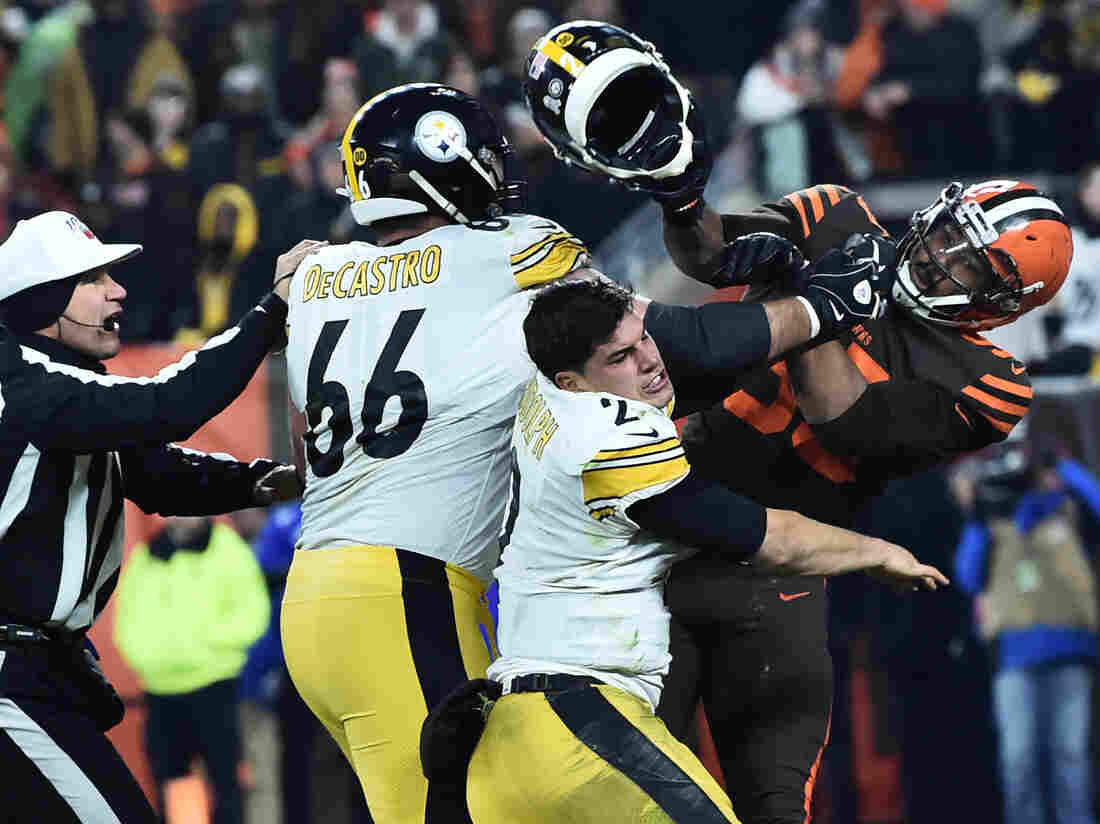 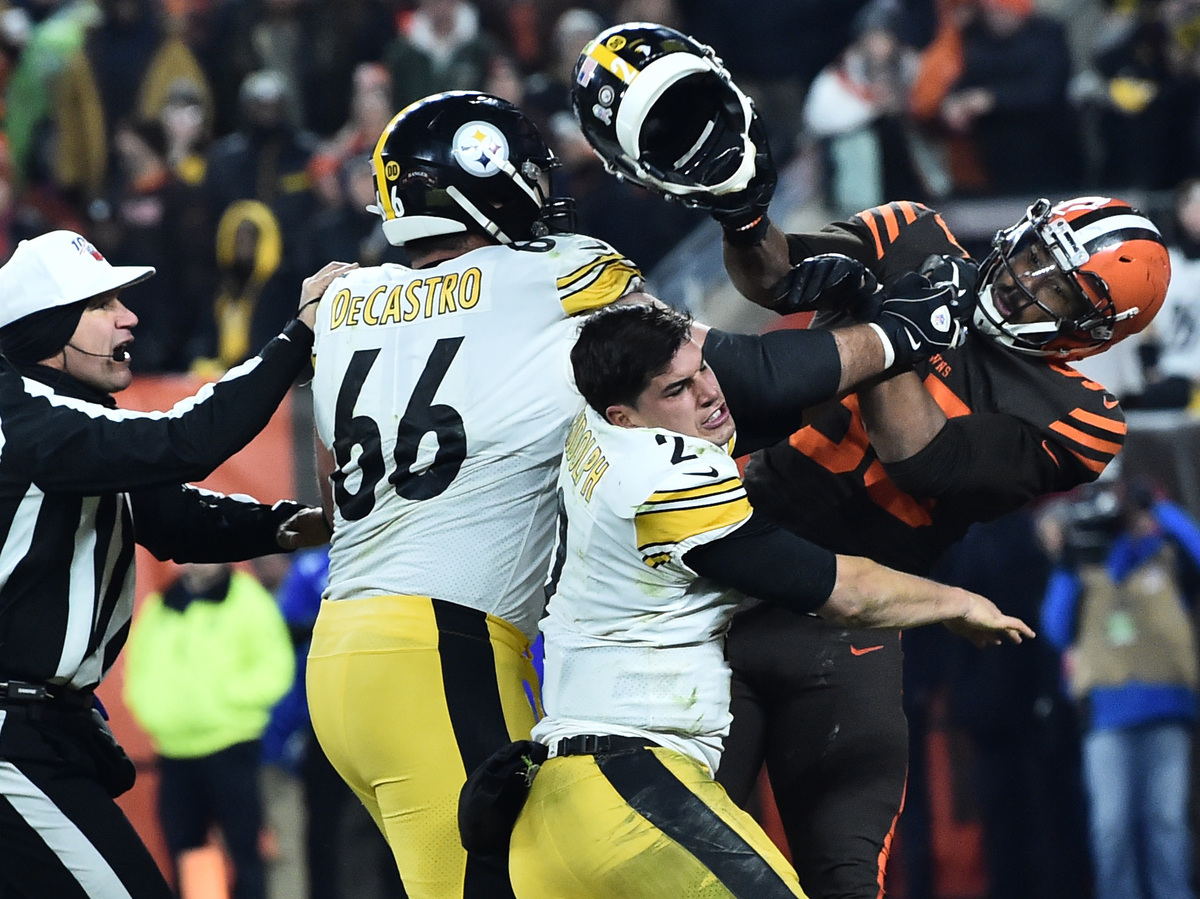 The NFL has suspended Cleveland Browns defensive end Myles Garrett "indefinitely," after Garrett ripped off Pittsburgh Steelers quarterback Mason Rudolph's helmet and whacked him in the head with it during a fight at the end of a game Thursday night.

Garrett won't play again in the rest of 2019 and the postseason, the NFL announced. A date for his possible reinstatement and return won't be set until he meets with the commissioner's office.

"Garrett violated unnecessary roughness and unsportsmanlike conduct rules, as well as fighting, removing the helmet of an opponent and using the helmet as a weapon," the NFL said as it announced its decision.

In response to the NFL's move, Browns owners Dee and Jimmy Haslam sent a statement about Garrett to member station WCPN ideastream in Cleveland saying, "We understand the consequences from the league for his actions."

The NFL also suspended Steelers center Maurkice Pouncey for three games for fighting: he punched and kicked Garrett in the aftermath of the helmet hit. And it punished the Browns' Larry Ogunjobi with a one-game ban because he blindsided Rudolph with a hit after the quarterback had been separated from Garrett.

The league also fined all three players, but it did not disclose the amounts. The Browns and Steelers organizations were each fined $250,000.

The Haslams said they are "extremely disappointed" in the altercation. They added, "We sincerely apologize to Mason Rudolph and the Pittsburgh Steelers. Myles Garrett has been a good teammate and member of our organization and community for the last three years but his actions last night were completely unacceptable"

If Garrett's suspension withstands an expected appeal, he would miss the Browns' last six games. His punishment is one of the stiffest penalties for on-field behavior the NFL has ever levied, second only to that of Oakland Raiders linebacker Vontaze Burfict, who was suspended for the rest of the season in late September, with 12 games remaining.

The NFL says more disciplinary measures "will be forthcoming" for other players, including those who left their benches to join the fight.

Garrett's actions obliterated the NFL's boundaries of controlled violence, resulting in his immediate expulsion from Thursday night's showcase game. The fighting also triggered shock and outrage and disbelief in the closing seconds of a game that the Browns' defense had dominated.

Garrett was ejected from the game along with Pouncey, who rushed in and helped take Garrett to the ground in retaliation for his attack on Rudolph. As lineman David DeCastro grappled with Garrett, Pouncey punched and kicked at his helmet. The Browns' Ogunjobi was also ejected.

Discussing the fracas after the game, Garrett said it was "embarrassing and foolish and a bad representation of who we want to be."

"Rivalry or not, we can't do that. We're endangering the other team. It's inexcusable," Browns quarterback Baker Mayfield said.

Garrett has emerged as a defensive star for Cleveland in his third professional year, but he has also incurred penalties at a fast rate, including two roughing-the-passer calls and an unsportsmanlike conduct foul before Thursday's game.

The NFL has a personal safety rule forbidding "impermissible use of the helmet" — but the rulebook foresaw players using their own helmet to hit others in the course of a game, not a football player ripping an opponent's helmet off and striking him with it.

"I made a mistake, I lost my cool," Garrett said afterward. "And I regret it. It's going to come back to hurt our team. The guys who jumped in the little scrum — I appreciate my team having my back, but it should never have gotten to that point. That's on me."

"I thought it was pretty cowardly, pretty bush league," Rudolph said after the game. When asked how he was feeling after the violent end to a tough game, he replied, "I'm fine. I'm good, good to go."

Before this season, the NFL's longest suspension was a five-game ban earned by Albert Haynesworth in 2006 for removing a Dallas Cowboys player's helmet and then stomping on his face.

After last night's game, former Steelers linebacker James Harrison — who faced his own suspensions for dangerous hits during his career — was one of many NFL insiders who said Garrett's actions amounted to assault.

"That's assault at the least," Harrison said via Twitter. He added, "6 months in jail on the street.. now add the weapon and that's at least a year right?!"

The incident began with around 10 seconds left in the game: Garrett grabbed Rudolph as the quarterback completed a harmless third-down pass in the Steelers' own end, stopping the game clock at 8 seconds. But after Garrett tugged and twisted Rudolph to the ground, the two began wrestling and Rudolph grasped Garrett's helmet with both hands.

As they got up, Garrett ripped the quarterback's helmet off by its facemask — and as DeCastro tried to intervene, Garrett swung Rudolph's helmet in a vicious overhand arc, hitting the quarterback. As Rudolph turned to an official seeking a penalty, the Browns' Ogunjobi leveled him from behind, sending him back down to the turf.

At the time, the Browns were leading 21-7, and their defense had already recorded four sacks and four interceptions against Rudolph's Steelers. In the Browns' stat sheet for the night, Garrett was notably absent from its sack list.

Going into Thursday night's game, Garrett was leading the AFC in sacks, with 10 quarterback takedowns through the first nine games of the season. He had also been effective against the Steelers, recording four sacks and forcing three fumbles in just three games against the Browns' division rivals.

Cleveland started the year on a wave of optimism, with talk of a possible run deep into the playoffs. But the team hasn't lived up to those expectations. And now — instead of discussing their hopes to build on a win that brought their record to 4-6 — the Browns and Garrett are the talk of the NFL for all the worst reasons.

Prior to Garrett's ejection, Browns safety Damarious Randall was also kicked out of Thursday night's game, for delivering a dangerous helmet-to-helmet hit on Steelers wide receiver Diontae Johnson. But it was the end of the game that left the worst impressions in Cleveland.