Accessibility links
Shooter At Santa Clarita, Calif., School Has Died; Officials Say He Shot Himself One of two students killed at Saugus High was a nephew of a sheriff's employee. Three off-duty officers were the first to respond to the 911 call — they were dropping their kids off at the school. 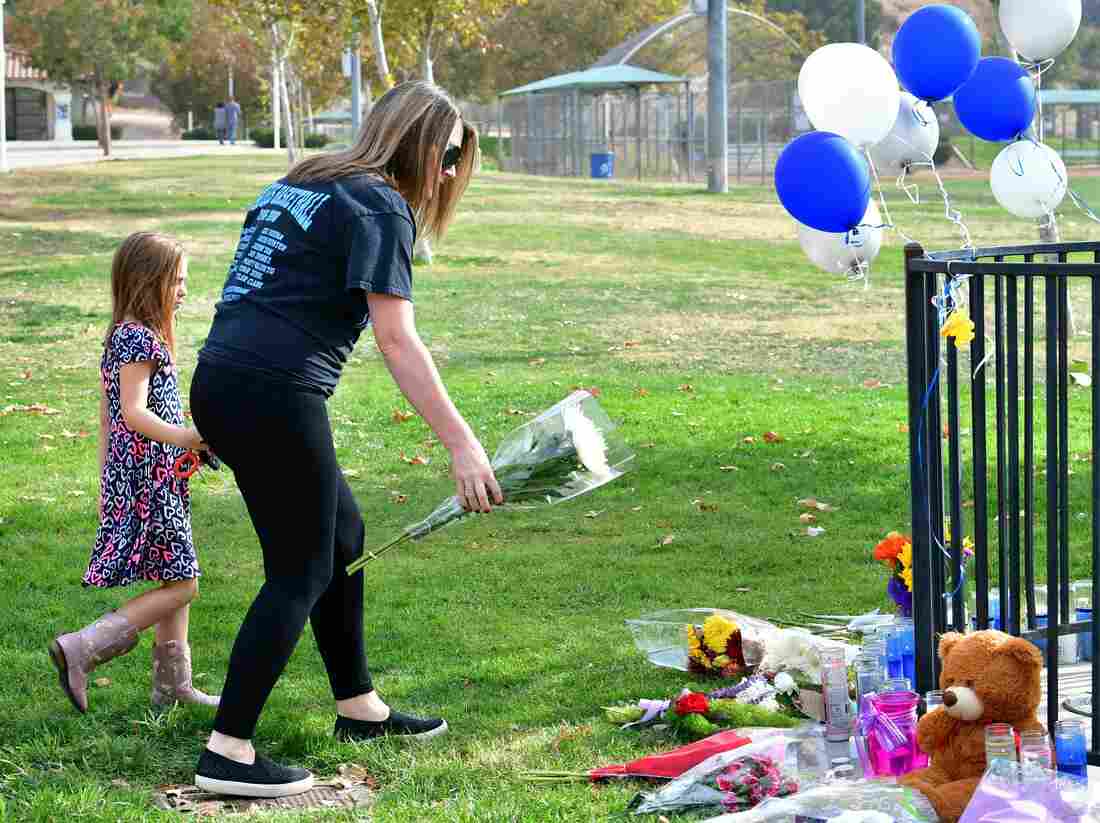 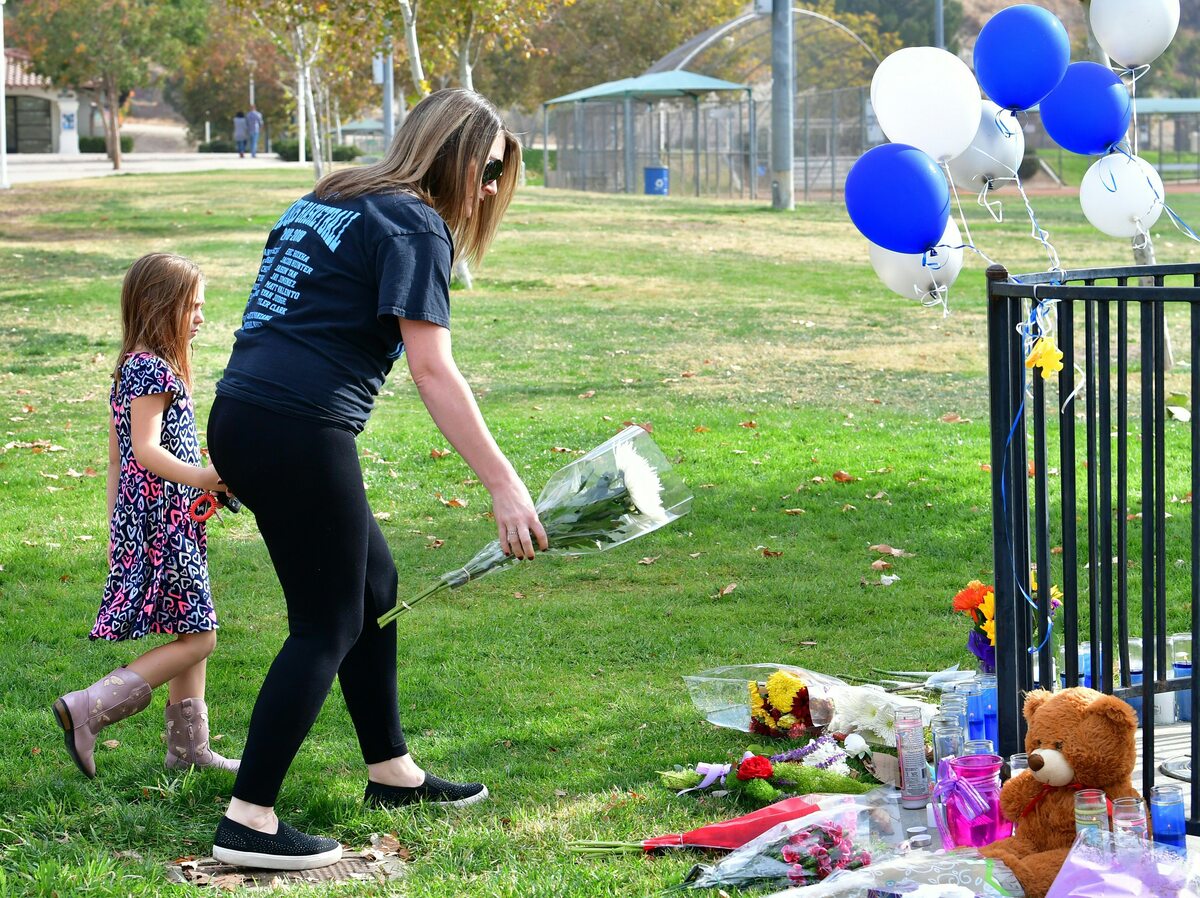 A woman and girl drop off flowers at a makeshift memorial in Central Park near Saugus High School in Santa Clarita, Calif., where a student shot five fellow teenagers Thursday.

The shooting suspect in Santa Clarita, Calif., has died one day after the attack at Saugus High School that killed two students. Authorities identified him as Nathaniel Tennosuke Berhow, 16, a junior at the school. Officials say he died at a hospital where he was being treated for a self-inflicted gunshot wound to the head.

One of the two students who died in Thursday's shooting at Saugus High was the nephew of an employee of the Los Angeles County Sheriff's Department, underscoring the shooting's devastating impact on the nearby community.

"The 14-year old-boy is the nephew of one of our security officers," Los Angeles County Sheriff Alex Villanueva said, in an interview Friday morning with TV station NBC4 in Los Angeles.

A female student also died in the shooting; Villanueva identified her at a Friday news conference as Gracie Muehlberger, 15.

"Her parents, Cynthia and Brian, [are] obviously devastated," Villanueva said. "We're with them. And it's a tough day here in Santa Clarita."

Other victims in the case aren't yet being named publicly, the sheriff said, because their families haven't been able to inform all of their relatives.

The Los Angeles County Sheriff's Department says Berhow carried out the attack on his birthday, carrying a .45-caliber pistol to school on the day he turned 16. Investigators say he shot five others before shooting himself.

Three off-duty law enforcement officers were the first to respond to the scene as shots were fired at Saugus High — because they were dropping kids off at the school. As students fled the campus and the first urgent messages went out over police channels, the officers were rushing inside to help.

One of those officers was Detective Daniel Finn of the Santa Clarita Sheriff's Station, who spoke at a news conference Friday.

"I was on my way to work, I was dropping off my girlfriend's son at school," Finn said.

As he neared the school, he saw "several hundred students running off-campus," Finn said. He then drove into the school circle, where a student told him there had been gunshots.

Finn informed the sheriff's station and started to enter the campus. As he did so, an off-duty Inglewood officer joined him. They didn't know what to expect — but they found the campus nearly deserted.

"There were no students," Finn said. "Most of the students, the vast majority of them had already either exited campus or been safely secured in a building."

When they entered the quad area, they spotted three wounded students lying on the ground, with the gun nearby. Still uncertain whether a gunman might be lurking on the campus, Finn and the other officer began giving the students medical aid. And drawing on his own experience as a former school resource deputy, Finn told a school administrator to get the facility's medical aid bags.

"He brought them out and we started assessing their wounds and trying to pack the wounds and stabilize them."

None of the students spoke, Finn said.

In addition to the suspect and the two students who died, three other students were also shot: two females, ages 14 and 15, along with a second 14-year-old male. One male victim was released from the hospital late Thursday; the other victims were in stable condition as of Friday morning, Villanueva said.

"Suffice it to say, we did not find any manifesto, any diary that spelled it out, any suicide note or any writings which will clearly identify his motives behind this assault," Wegener said.

Villanueva refuted local reports that have suggested the gunman shot his ex-girlfriend and her best friend.

"That is not accurate," the sheriff said. "As far as we know, the actual targets were at random."

The suspect had been dropped off at school by his mother, Villanueva said. He said investigators recovered several firearms from their house, including some that he said "were not registered at all."

Noting the suspect brought the gun to school and seemed to count his shots as he fired, the sheriff said, "It wasn't a spur-of-the-moment act."

The shooting took place in the school's quad and was captured on its surveillance video system. Citing that footage, Wegener said on Thursday that from the moment the suspect took a pistol from his backpack, then shot his fellow students — and then shot himself in the head — only about 16 seconds elapsed. But that quick succession of events has left a tight-knit community reeling.

Of the families whose loved ones were killed or wounded in the shooting, Villanueva said Friday morning, "It's devastating for them. They're in total shock."

"Everyone else who had a family [member] in the school, they had that moment where they didn't know the safety or the whereabouts of their children," the sheriff added.

Describing the shock of the violence that struck before classes began Thursday morning, Villanueva said that even for parents and children who were safely reunited, "That's just a hard road to travel."

In the NBC affiliate interview, Villanueva discussed the officers who came to the wounded students' aid:

"So the three of them were the first on scene. They made entry into the school — as everybody is running away, they're running towards the sound. And they came across the six victims suffering from gunshot wounds. And they started [first aid] treatment right there on the spot."

Emergency medical staff says the quick response was "a key point to save lives" in the moments after the shooting, Villanueva added.

As his department investigates the shooting, the sheriff also says it's important to work on better ways to prevent tragedies like the one that hit Saugus High School from happening at other schools. For starters, the sheriff said, the easy availability of guns in the U.S. is a problem that must be addressed.

"Where can we go from here? How can we prevent a future [shooting]? We have to do something. And gun control is that one that's just hanging out there and we have to work on."

Villanueva later added, "Unfortunately, there's the prevalence of guns — over 300 million floating in our country. Everyone else has access to them at some point. And in the wrong hands, this is the tragedy that happens."