Accessibility links
A Witness Recounts 1989 Jesuit Killings By Salvadoran Forces Trained By U.S. Six priests became modern-day martyrs in one of the most high-profile religious crimes in recent Latin American history. A woman who witnessed the incident says the FBI pressured her to stay quiet. 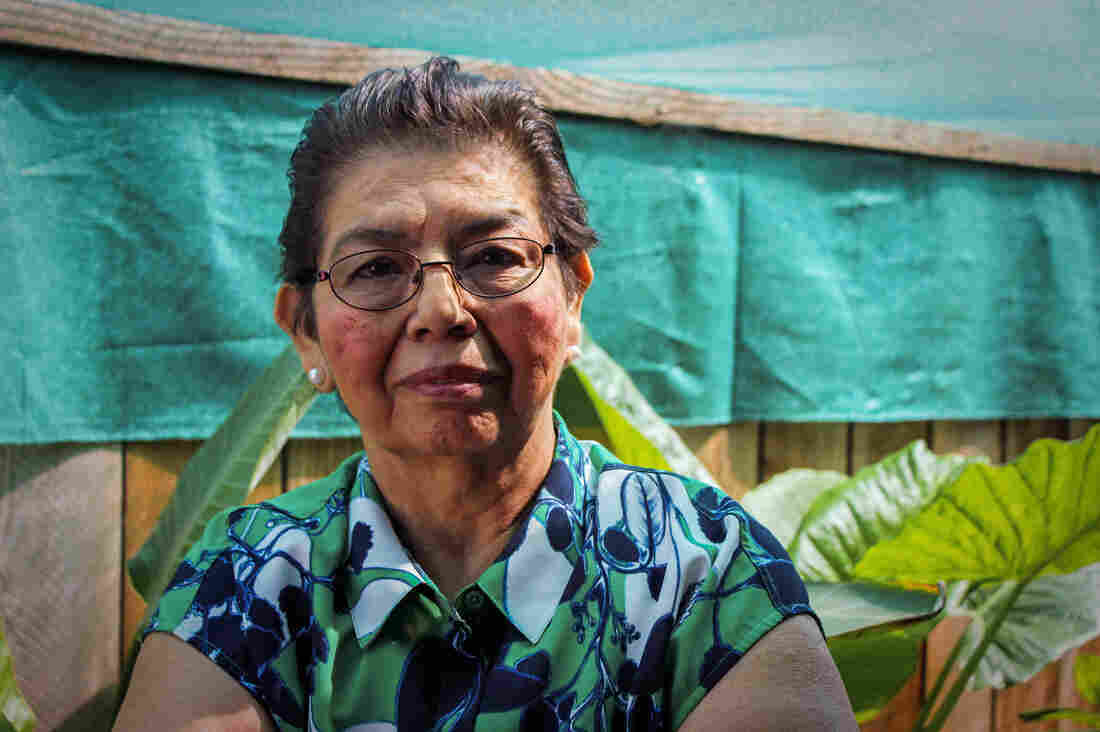 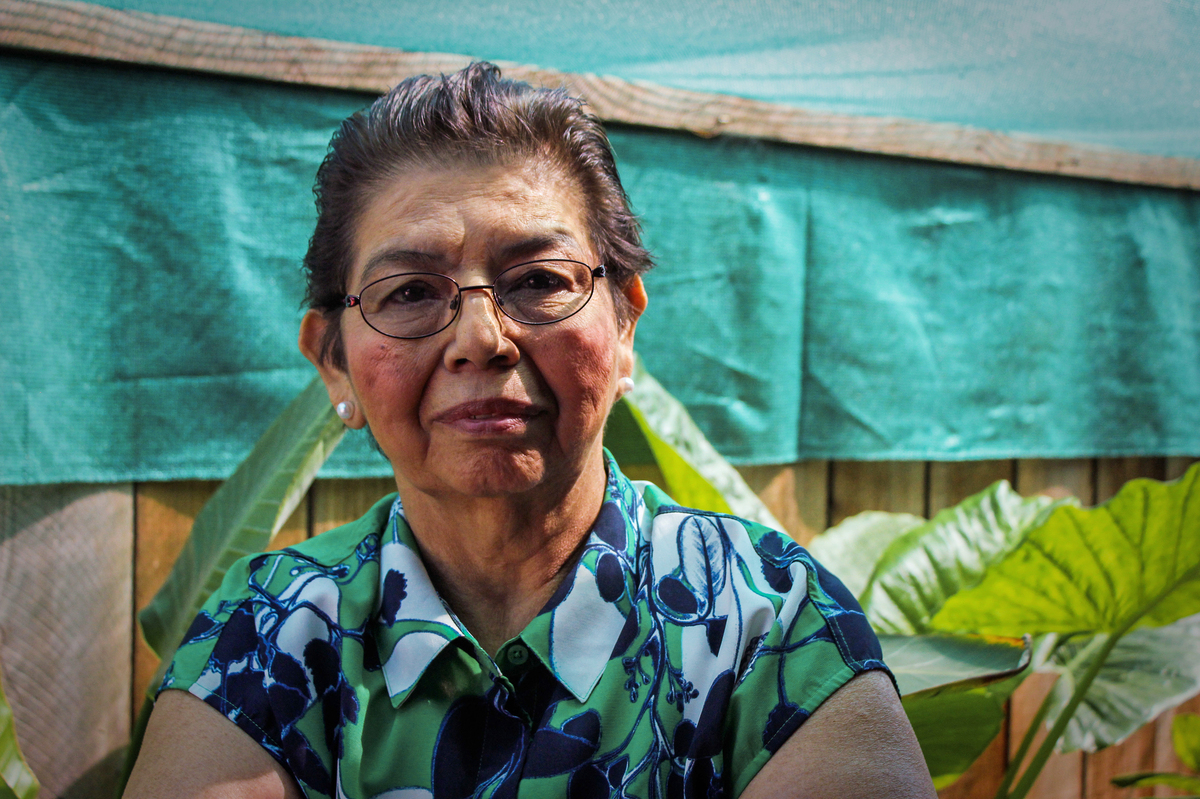 Lucía Cerna worked as a housekeeper at the José Simeón Cañas Central American University in El Salvador. On Nov. 16, 1989, she witnessed armed soldiers kill six Jesuit priests, a cook and a teenage girl.

On Nov. 16, 1989, a housekeeper named Lucía Cerna was startled awake by a violent commotion outside her window.

"I heard shooting, shooting at lamps, and walls, and windows," Cerna writes in her memoir, La Verdad: A Witness to the Salvadoran Martyrs. "I heard doors kicked, and things being thrown."

Armed soldiers broke into the José Simeón Cañas Central American University on the outskirts of El Salvador's capital, and raided the residence where six Jesuit priests were sleeping.

"I saw them," Cerna, 73, recalls vividly in an interview with NPR in her living room. For privacy, she does not want to disclose where she lives today. "I saw the men with all their equipment and uniforms. I was seeing it and hearing it all from a window."

Cerna huddled on the floor with her husband and their 4-year-old daughter in a nearby house when the soldiers began firing on the Catholic priests.

Among the eight killed were Ignacio Ellacuría, rector of the university, the Jesuits' cook Julia Elba Ramos and her 16-year-old daughter Celina Maricet Ramos. The last voice Cerna heard was vice rector Ignacio Martín-Baró, screaming at the soldiers: "This is an injustice!"

"Then they pushed him up the stairs and they killed them," Cerna says. "And everything was silent, as if nothing happened."

Saturday marks 30 years since the Jesuit massacre, one of the most high-profile religious crimes in recent Latin American history. It drew the world's attention to a deep crisis in El Salvador, and the human rights abuses that persisted throughout a 12-year civil war. Half a million Salvadorans were displaced, and many fled as refugees to the United States. 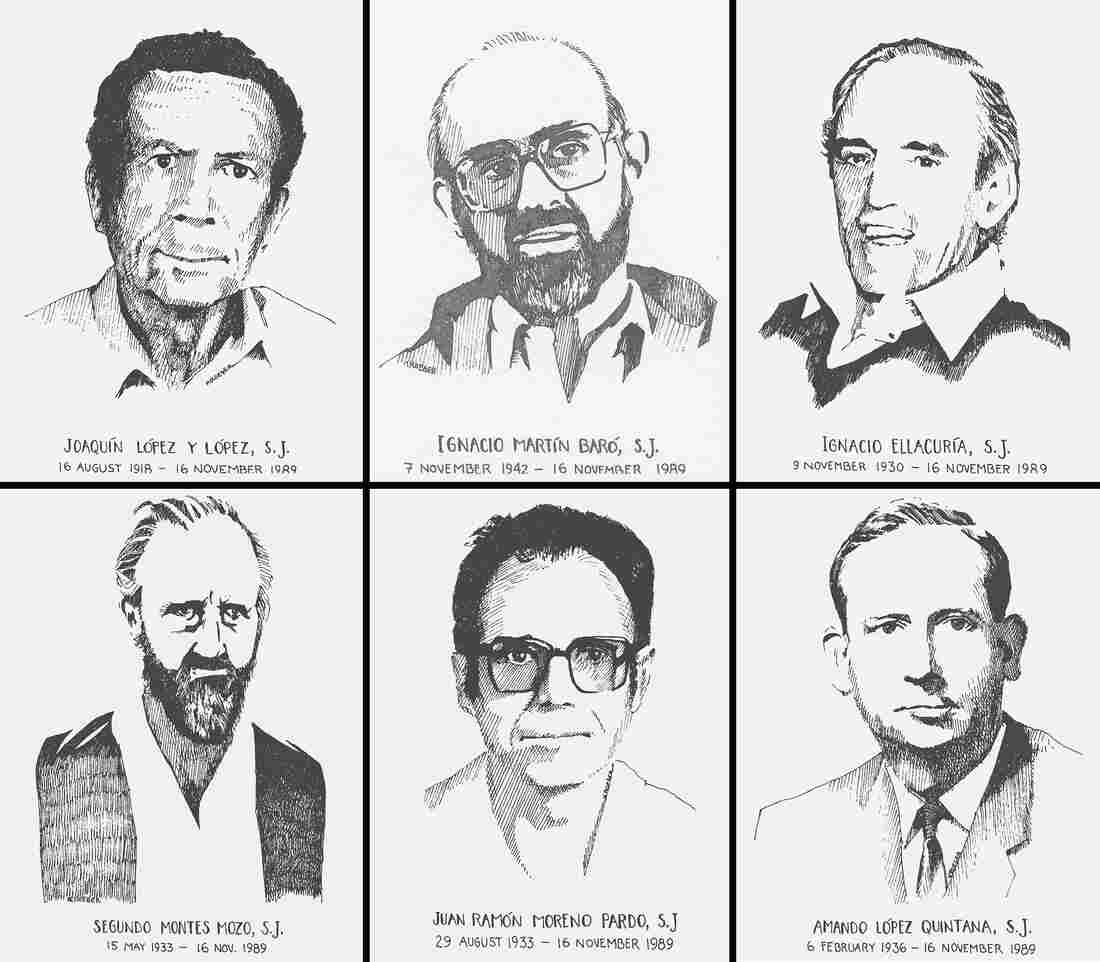 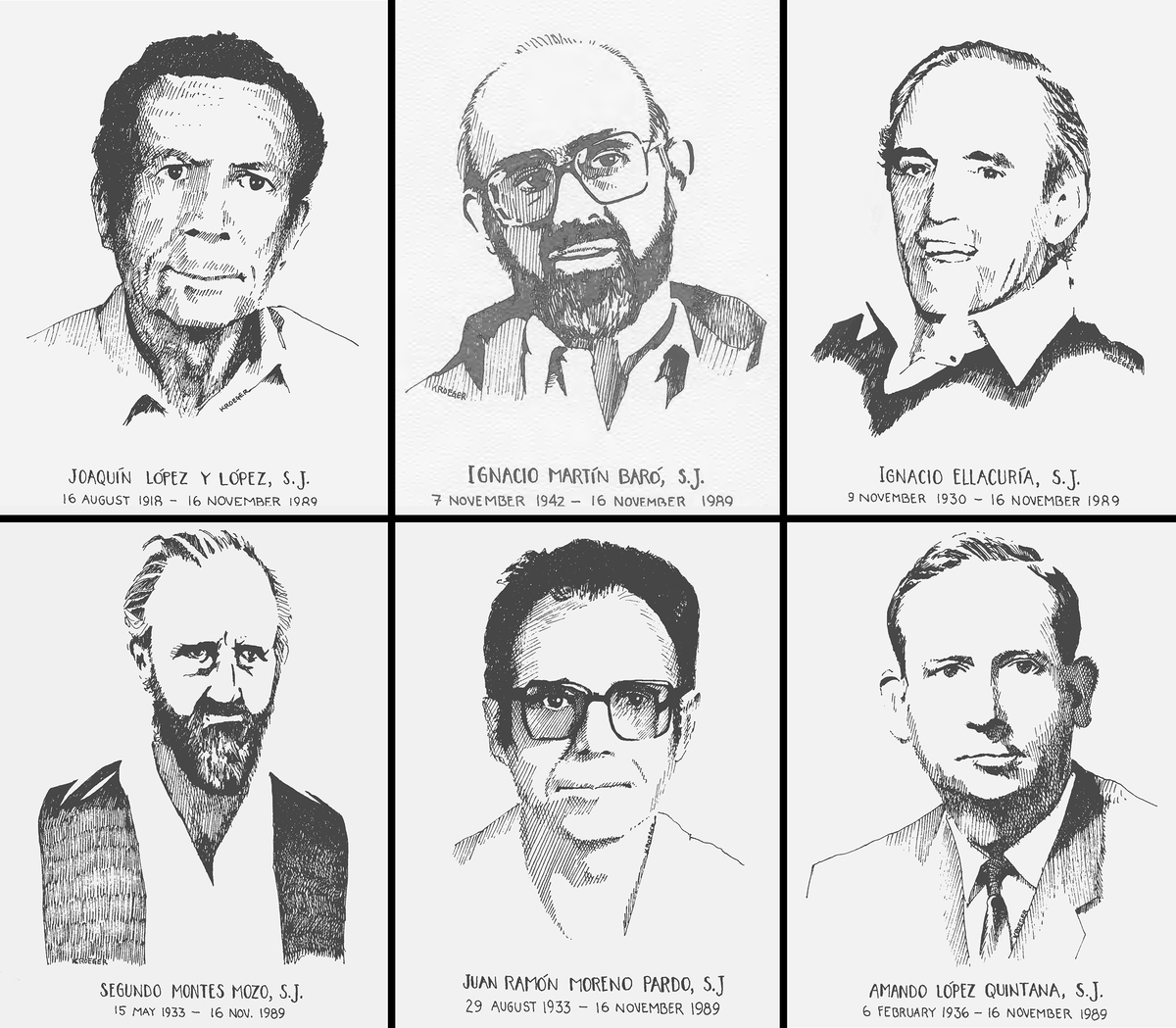 Outside the walls of the Central American University, the Salvadoran army was locked in intense fighting against leftist guerrilla forces from the Farabundo Martí National Liberation Front, or FMLN.

The United States, wary of Soviet influence in Central America, backed El Salvador's anti-communist military regime. Between 1980 and 1992, the U.S. sent over $4 billion in economic and military aid to El Salvador's government, amounting to about $1 million each day.

While U.S. policymakers argued the need to develop a democratic government in El Salvador, the reality was that Washington was bankrolling a corrupt military, known for kidnapping, torturing, and massacring innocent civilians.

"There were always bodies being discovered in the dumps," says Victor Abalos, who reported during El Salvador's civil war in the 1980s as a freelance journalist. "Young, old, women, men — the theme for a lot of people was that life was cheap."

The Jesuit priests had become the latest victims in the civil war that claimed over 75,000 lives. 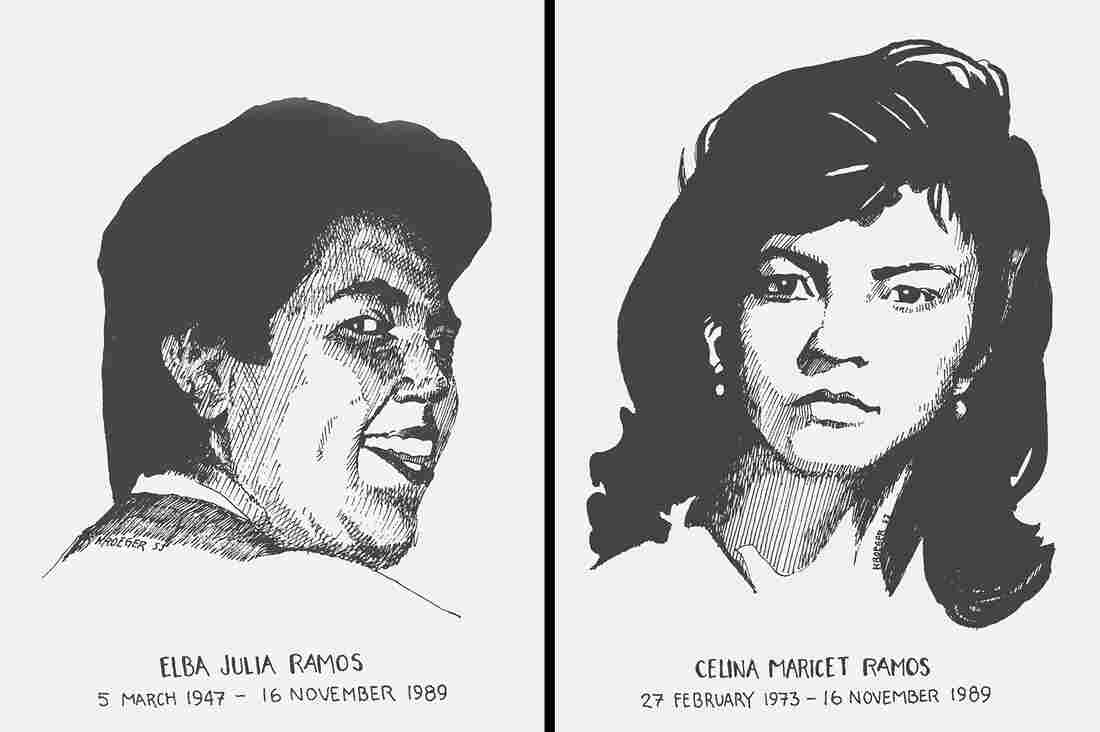 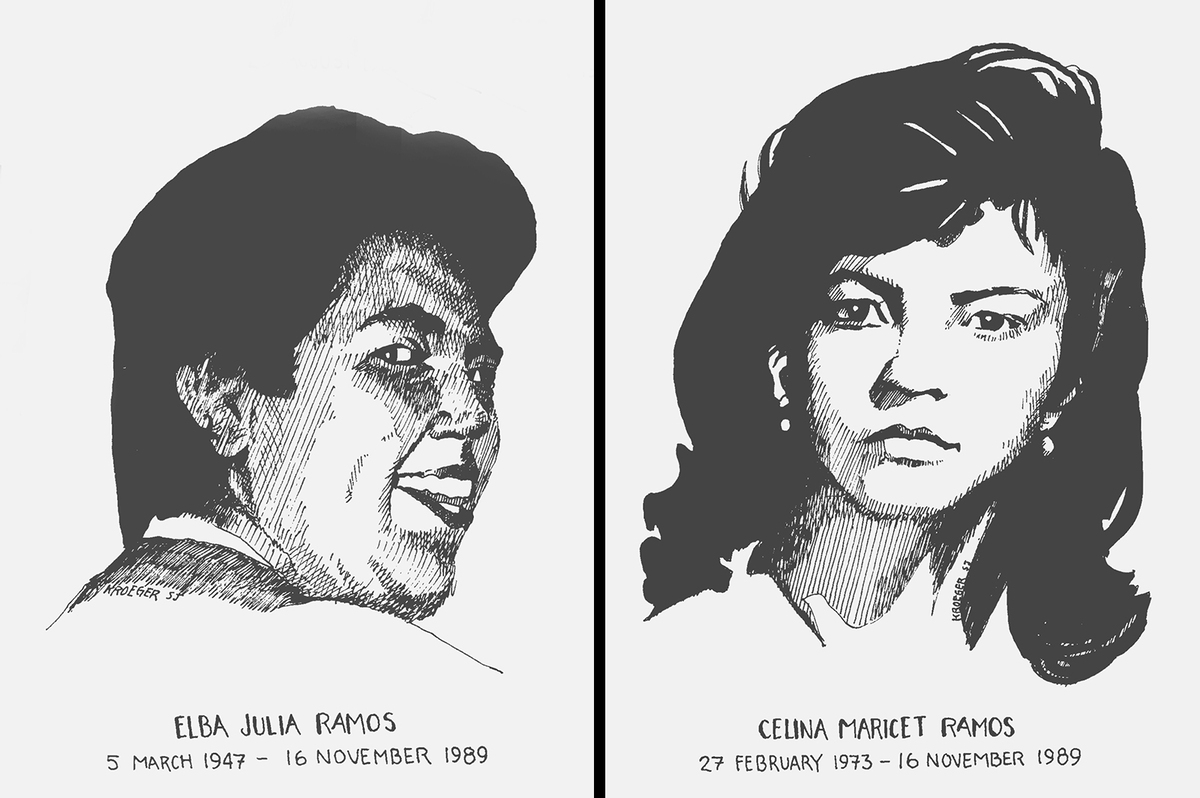 Cook Julia Elba Ramos and her 16-year-old daughter Celina Maricet Ramos were among the eight killed in 1989.

"Be a patriot, kill a priest"

"One of their models was to love and to serve," says Paulita Pike, an American who studied with the Jesuits at the Central American University, and lives in El Salvador. "To take care of the poor, to minister to the poor, to the hungry, to those who had nothing."

The priests publicly opposed U.S. support of the Salvadoran armed forces, and pleaded for peaceful dialogue between the right and the left. They polled poor citizens and kept detailed records of refugees fleeing the country.

"These were defenseless populations that were killed mercilessly," Pike says. "The Jesuits loved El Salvador and they felt it was their obligation to not abandon us in our darkest hour."

Yet the right wing accused the Jesuits of being communists, and Ellacuría was called "the brains behind the guerrillas."

"In the days leading up to the Jesuit massacre, I was driving with my mother and we were listening to a [state-run] radio broadcast," Pike recalls. "You were listening to this non-stop hatred and it was all directed at the Jesuits — and specifically, against Ellacuría." 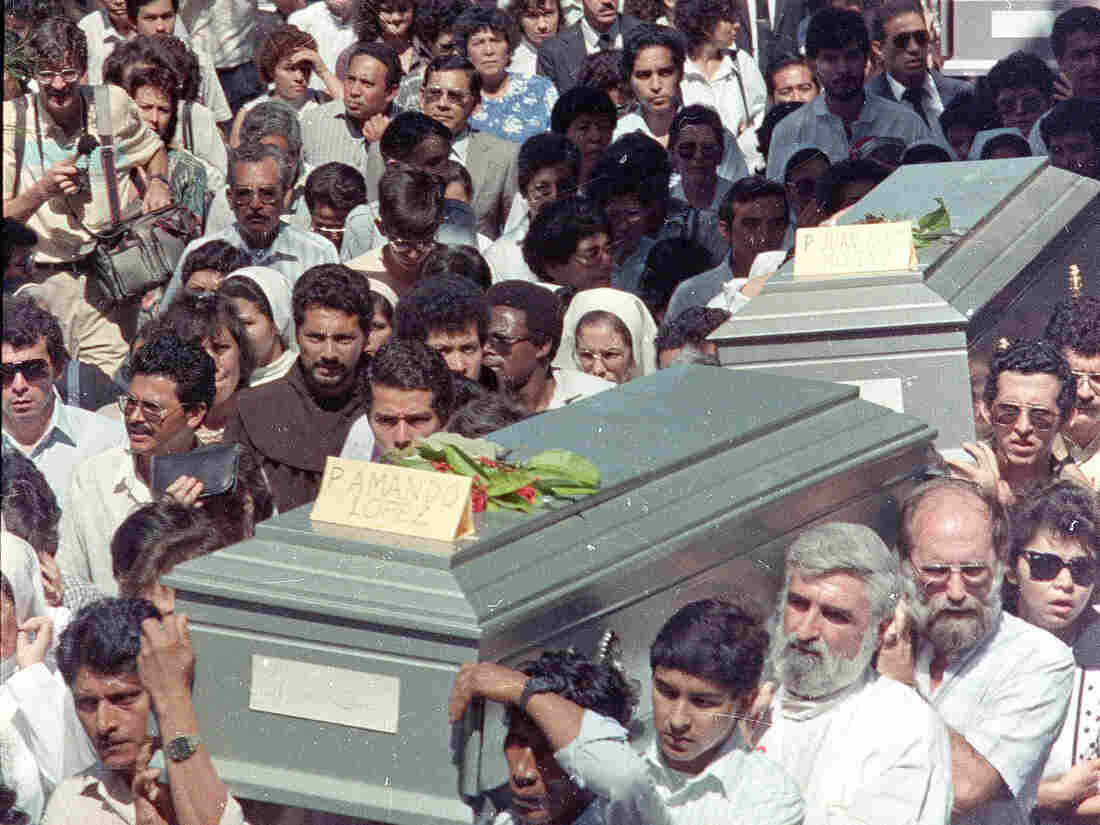 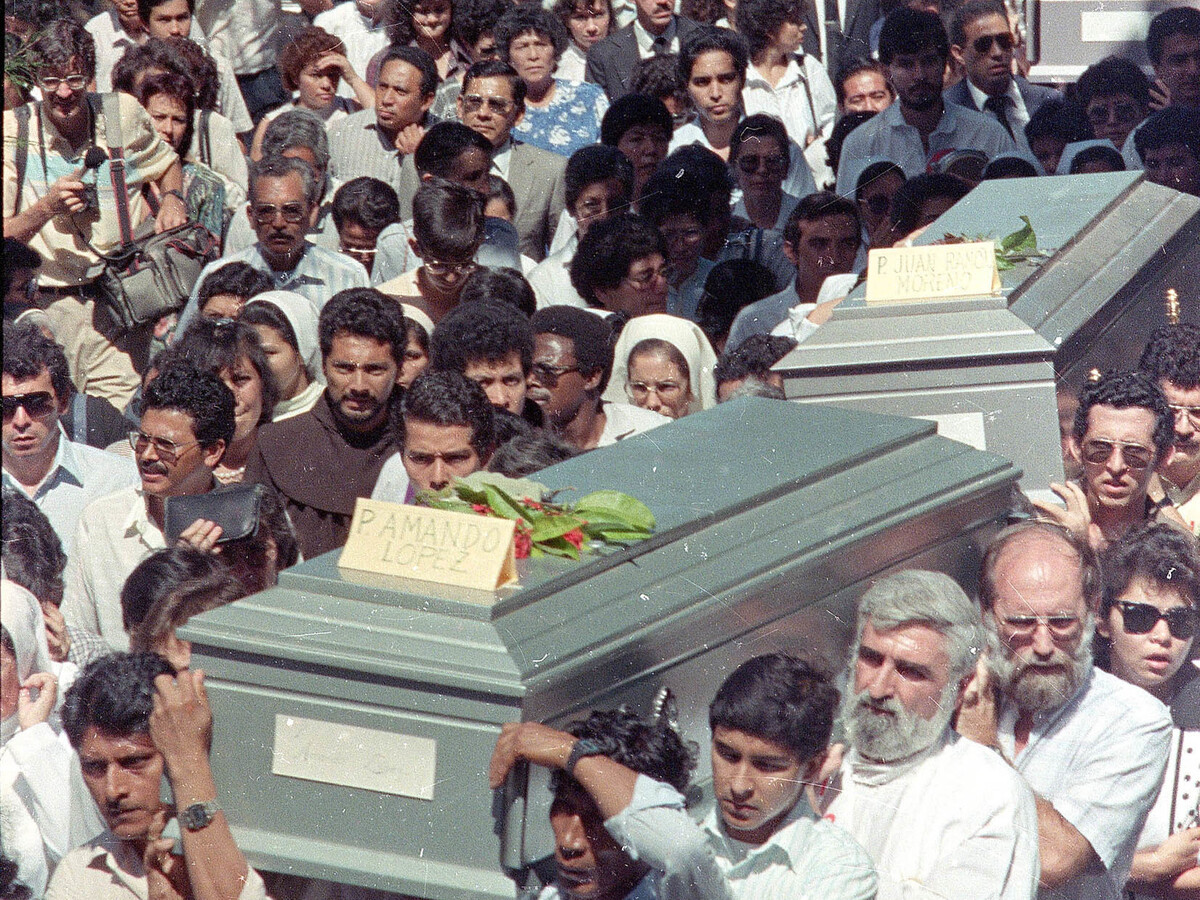 The funeral procession for the six Jesuit priests in San Salvador, El Salvador on Nov. 19, 1989.

It wasn't the first time the Catholic clergy came under attack in El Salvador. Throughout the civil war, priests and nuns who stood alongside the poor were targeted by right-wing death squads — expelled, beaten, imprisoned and killed.

On March 12, 1977, priest Rutilio Grande was ambushed by gunmen on his way to Mass in the rural town of El Paisnal, killed in a shower of bullets.

On March 24, 1980, El Salvador's famed Archbishop Óscar Romero, who was canonized as a Catholic saint last year, was assassinated at the altar while celebrating Mass at a hospital chapel in San Salvador.

"If the security forces found a Bible on you, you were somebody of suspicion," Pike says. "The Bible was considered a subversive book."

Flyers were scattered outside churches with a chilling message: "Be a patriot, kill a priest."

Segundo Montes, one of the Jesuits killed in the November 1989 attack, had spoken to NPR before he died. "We all must risk a little," he said.

"They did not believe me"

Cerna spent 10 years working as the Jesuits' housekeeper at the university in San Salvador.

"I felt so happy, even when all I did was sweep and dust," she says. "I came to love the priests very much."

She says she knew every hall, every room, every corner of the priests' offices because she cleaned all of it. 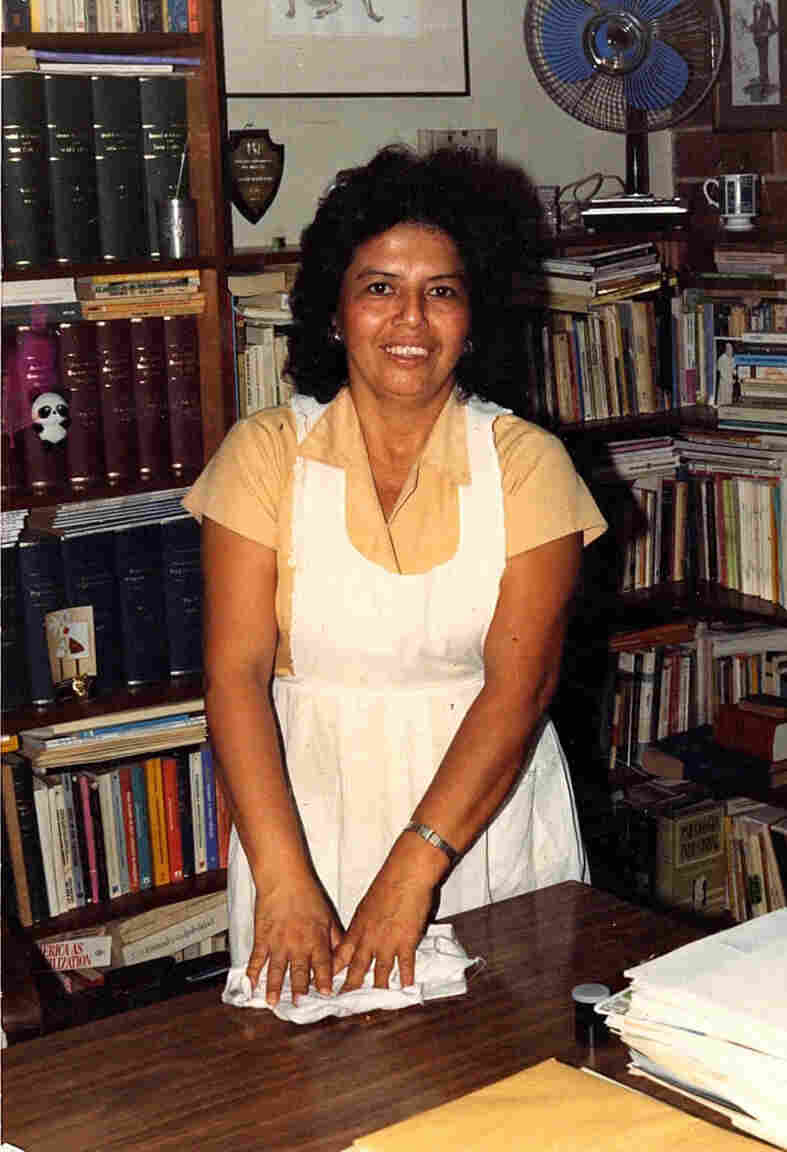 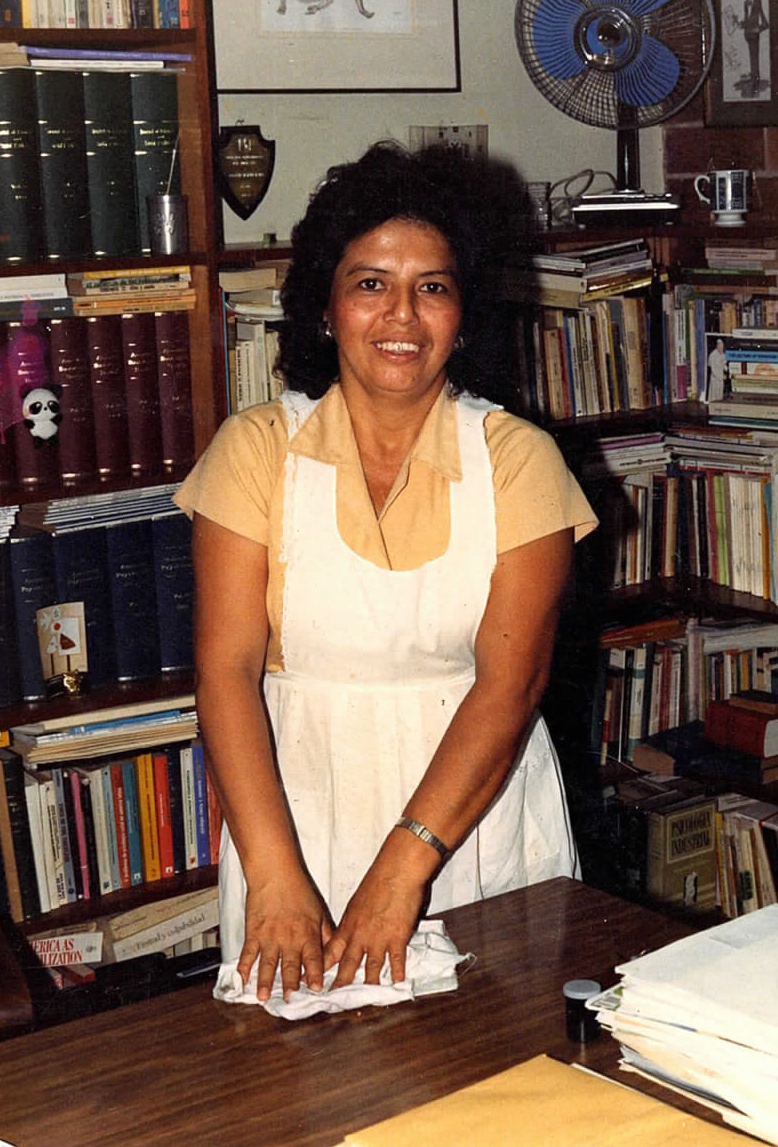 In this photo taken in 1984, Lucía Cerna cleans the office of Ignacio Martín-Baró, vice rector of the José Simeón Cañas Central American University.

Ignacio Martín-Baró/Courtesy of the Cerna family

"I even knew them by the sounds of their footsteps when they'd walk in the office," she says. "Before the tragedy, I smiled. Everything I did, I did it with a smile. But after that happened, I went into a deep depression."

The soldiers who carried out the assassinations were ordered to leave no witnesses, putting Cerna's life in danger. She fled the country under the protection of the Jesuits and European diplomats, and arrived at a Radisson Hotel in Miami, Fla., where the FBI and a Salvadoran colonel questioned her.

"They did not believe me," Cerna writes in her 2014 book, La Verdad, which is Spanish for "the truth." "They accused me of being a communist and a guerrilla. I kept saying, 'I am a housekeeper.'"

Cerna has long alleged that American and Salvadoran officials intimidated and pressured her to change her story, saying that she never saw U.S.-backed Salvadoran soldiers that night.

The FBI denied the allegations, and a State Department spokesperson said the questioning was conducted properly.

"I always tell the truth," Cerna says today. "That's what the priests taught me."

In 1993, a United Nations-sponsored report confirmed the startling details of the November 1989 massacre: The Jesuits were killed by members of the Atlacatl Battalion, an elite unit of the Salvadoran army trained and equipped by the United States.

Thirty years later, Cerna still wonders if she could've somehow changed the hearts of the soldiers who killed her friends.