Accessibility links
Review: In Graphic Novel 'Bradley Of Him,' A Surreally Fun Desert Run Connor Willumson's graphic novel follows the trail of a mysterious athlete, or possibly an actor — gawky, pale, never takes his mirror shades off — running through the desert outside Las Vegas.

'Bradley Of Him' Is A Surreally Fun Desert Run

'Bradley Of Him' Is A Surreally Fun Desert Run 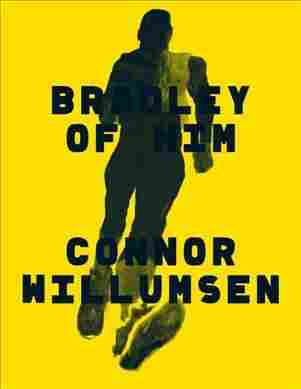 So there's this pale, gawky, bald guy in mirror shades running through the desert. That's the central image of Connor Willumsen's graphic novel Bradley of Him, and it's also a kind of seed. From the image of a stubborn runner in an inhospitable landscape, Willumsen has built up a hilarious and philosophically challenging meditation on individuality, capitalism, celebrity, connection — and, under it all, absurdity.

Willumsen seems to have shaped his story the way only an artist would, letting the visual lead the verbal. All the ideas and characterizations in Bradley of Him are spun off from the iconic figure of the desert runner. With his smooth pate (shaved and covered with a skintight cap to ward off the sun) and reflective specs, he's got a definite Hunter Thompson vibe — especially since he's not just in any desert, but the desert outside Las Vegas. But he's kind of an anti-Thompson. Rather than getting high and tormenting the squares, he devotes himself to pointless, excessive physical discipline until he's vomiting and desperately stripping off his clothes. His pale skin, so unsuited to the blazing heat, is a potent sign of the absurdity of his endeavor — and of human endeavors in general. Willumsen underscores the point by having him stumble into a hippie enclave, a fenced hideaway whose posted rules include "Nudity Optional." The sunbathing denizens look as uncomfortable and out-of-place as he does. When he goes back to town, the remembered presence of the surrounding desert mocks the city plopped down in the middle of it. Everything in Vegas is the opposite of the desert: Crowded, off-kilter and discordant, full of mirrored surfaces (echoing the mirror shades) and potted plants.

In 'Hex Wives,' The Witches Are Hunting You

Lots of artists are skilled enough at thinking visually to let themes emerge this way, but it helps immeasurably that Willumsen happens to have such an elegant line and painstaking technique. The former is precise and soft at once, making the runner and his surroundings a consistent pleasure to dwell with. Willumsen delicately balances shades of gray and deploys dark and light space with perfect finesse. Periodically, he throws in an emotionally packed, geometrically challenging full-page composition to shake things up.

Though it's deeply grounded in the play of images, Willumsen's book has plenty going on wordwise as well. The runner, whose real name we never learn, is in the grips of a complicated delusion that he's the actor Bradley Cooper getting ready to star in a biopic about Lance Armstrong. (Or maybe he really is Bradley Cooper, though none of the other characters recognize him as such.) He's decided on the running regimen as a preparation technique. Early in the book, he composes a long, earnest letter to Robert DeNiro and then — in a masterfully comic scene — carefully selects an envelope and stamp with the aid of a hotel desk clerk. (We never see him mail it.) At other times he imagines himself accepting an Oscar for the role.

Lots of artists are skilled enough at thinking visually to let themes emerge this way, but it helps immeasurably that Willumsen happens to have such an elegant line and painstaking technique.

In between training in the desert and communing with imaginary members of the Hollywood elite, the runner wanders around Vegas. This gives Willumsen the chance to hit the theme of capitalist absurdity hard, with visits to such target-rich environments as lunch buffets and casino floors. At one point the runner stops to contemplate a car that's being offered as a prize for playing a game based on the TV show Family Guy. He winds up having a long and funny conversation with the hotel's "Luxury Coordinator and Floor Liaison for Major Prizes" about the vehicle's price. "Well, of course it's 'worth money,' but it's impossible to account for all of the subtle innovations and agreements that occurred between the casino and manufacturer, to say nothing of its raw desirability as a prize," she explains. "Prizes are won, not purchased."

The Luxury Coordinator is like everyone else the runner meets, enmeshed in the excesses and contradictions of capitalism. She doesn't have her own story, aside from being a corporate drone. Like her, the other characters mostly serve to augment the runner's spiraling, parallel journeys through his own psyche and contemporary America. But those journeys are rich nonetheless — visually and thematically. Bradley of Him is a fun run.