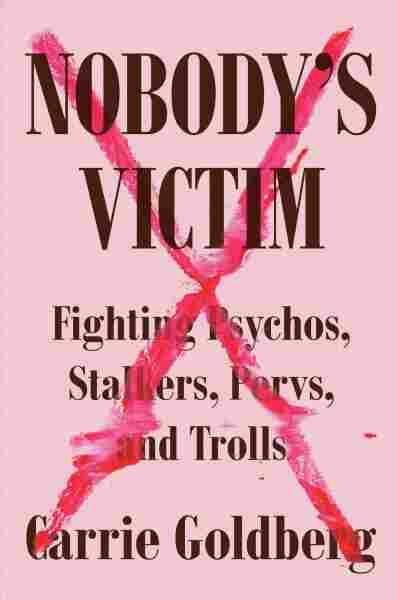 When Carrie Goldberg broke up with her boyfriend of a few months, frightening things started happening. He sent her hundreds of threatening messages. He contacted her friends, family and even work colleagues on Facebook to spread vicious lies about her — and that wasn't all. One night she opened her laptop to find email after email containing intimate pictures of her, including a graphic video filmed without her consent. Goldberg, a lawyer, went to the police and was told there was nothing that could be done.

Thousands of dollars in legal fees and a restraining order later, Carrie Goldberg has turned her traumatic experience into a career. She started her own firm to represent people who, like her, have been the targets of this kind of abuse — and she's written a new book: Nobody's Victim: Fighting Psychos, Stalkers, Pervs, and Trolls.

On what would make the situation better

Well, I think that we need to be able to hold our platforms liable for the harms that they cause. Right now there's absolutely no pressure on Facebook, on Twitter, on these humongous companies that so profit from our communication and our data. They have no pressure from the marketplace to be creating products that are responsibly designed. I feel that our court systems are designed to be the great equalizer. You know, just for the cost of an index number, my client, who might not have a penny to her name, could sue Jeff Bezos. Or in one case, my 13-year-old client sued the New York City Department of Education, a multi-multi-billion dollar entity. And when we as individuals ... can't get justice against a company, what incentive do they have to be creating anything that's that safe?

On the free speech argument

On advice for people who are experiencing this kind of harassment

My first piece of advice is is very practical: Don't delete anything, screenshot everything, on your phone, online. And then just recognize that you're not alone. In the back of my book, I have pages of of resources for everybody from victims of revenge porn to child sexual assault to sextortion, resources for the LGBTQ community. And I think that it's so important that victims and survivors have somebody that's on their side, you know, that they can tell, that they can confide in, because the scariest part of the entire process is feeling like you're under attack all by yourself. And the isolation.

On telling her own story in this book

It's empowering to have told my story. But I have to admit that there are moments of confusion and fear, and "Oh my God, did I really put all of that in that book?" And now, you know, when people tell me that they've read it, you know, there are parts of the book that I hadn't really talked about with almost anybody. ... But, you know, there is still some some discomfort with the fact that I've put all of this and all of these personal stories into the book. But I'm proud of it. And I feel that it's important. And one of the reasons I did it, you know, that I put so much personal information in it is because my clients give me everything. They tell me the most personal details of their stories. And then I put it into legal complaints, and those become public documents. And so, if they're being so willing and so trusting to expose themselves in order to advance their case and advance the law, then what am I doing if I'm not following that same model?

This story was edited for radio by Janaya Williams and Natalie Winston Friedman, and adapted for the Web by Petra Mayer