Accessibility links
First-Hand Account From White House Staffer Could Flesh Out Impeachment Probe Closed-door testimony from the only White House staffer cooperating with the probe could provide first-hand knowledge about details that remain hazy. 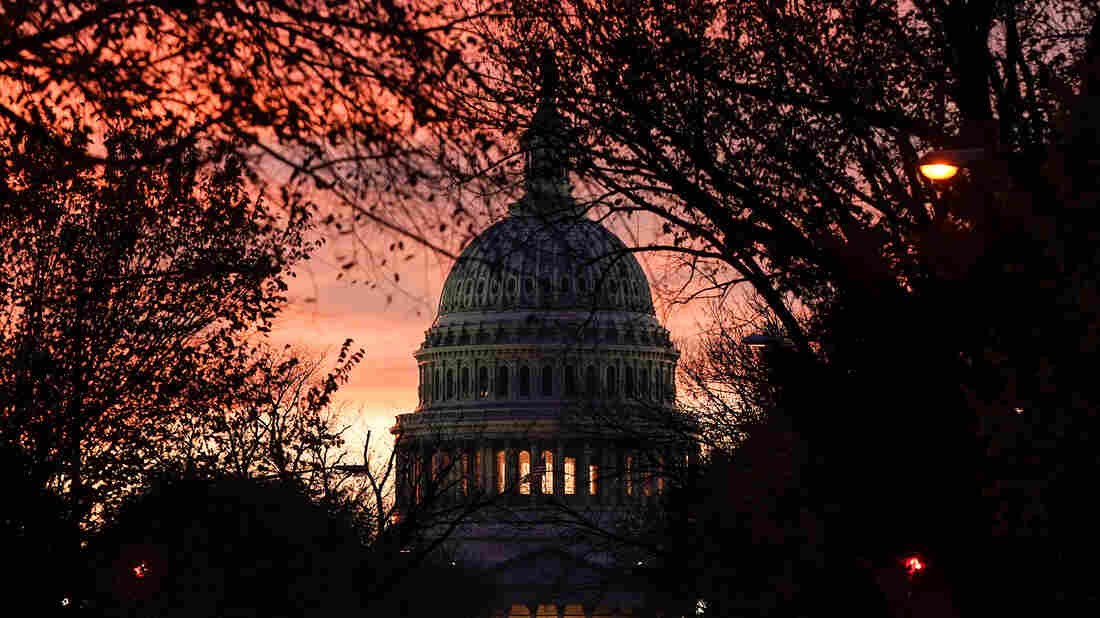 A budget staffer is to become the first White House official to testify about Ukraine aid in the impeachment inquiry at the Capitol on Saturday. Joshua Roberts/Reuters hide caption 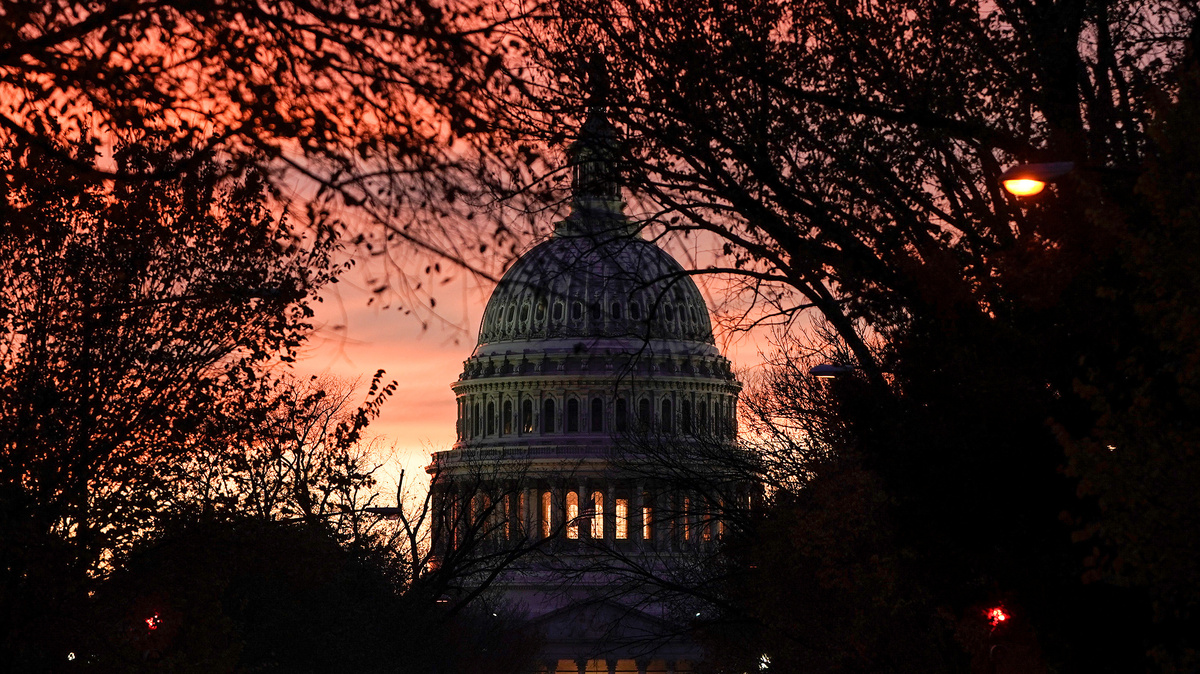 A budget staffer is to become the first White House official to testify about Ukraine aid in the impeachment inquiry at the Capitol on Saturday.

The question of exactly why the Trump administration held up close to $400 million in security assistance to Ukraine came up many times during the first two days of public hearings in the House of Representatives' impeachment inquiry.

Less discussed has been what motivated President Trump's abrupt decision on Sept. 11 to lift the hold on that aid.

Definitive answers to either question have thus far eluded the inquiry chaired by Rep. Adam Schiff, D-Calif. In part that's because nobody in the Trump White House who might have first-hand knowledge of those decisions has acceded to requests and subpoenas to testify — either privately or publicly — in the probe.

That could change thanks to a rare private session of Schiff's committee and staff on Saturday. The witness is White House Office of Management and Budget career staffer Mark Sandy.

Unlike acting OMB director Russ Vought and two other political appointees from that office, who all cited orders from the White House counsel's office in declining to provide closed-door testimony, Sandy has agreed to appear for a deposition if subpoenaed, his lawyer Barbara Van Gelder informs NPR.

Sandy, who served as acting OMB director during the first month of Trump's presidency, is the first current White House official to defy the arguments laid out in an Oct. 8 letter sent by White House counsel Pat Cipollone to House Democratic leaders. In that missive, Cipollone derides the impeachment inquiry as a "highly partisan and unconstitutional effort," and adds, "President Trump cannot permit his Administration to participate in this partisan inquiry."

Here are some key issues Sandy's deposition may shed more light on:

1. The timing of the hold put on the Ukraine aid.

There has been no official date established for when the hold took effect. A May letter from the Pentagon certified to Congress that anti-corruption measures in Ukraine required for the release of security assistance had been completed. The Pentagon announced on June 18 it was sending $250 million in security aid Congress had approved for Ukraine, and the OMB was notified three days later that another $141 million in assistance for Ukraine under the purview of the State Department was ready to be released, according to one department official who requested anonymity.

The OMB has to approve such security assistance before it's delivered, a process that normally takes up to five business days. In this case, the aid was stalled for at least 82 days after the OMB notification from State. Neither the Pentagon nor the State Department has revealed publicly if or when they were notified by the OMB that the aid was being withheld.

2. The question of whether the hold put on the security assistance may have constituted an illegal impoundment by the Trump administration.

By withholding the Ukraine aid for nearly three months without official notification to Congress, the White House appears to have been violating a law dating back to the impeachment inquiry of Richard Nixon.

After President Nixon tried to block funds approved by Congress for the Environmental Protection Agency, Congress passed the 1974 Budget and Impoundment Control Act to prevent such executive branch holds on appropriated funds. The act stipulates that officials withholding or delaying funds must notify Congress of the amount being withheld, the reasons for doing so, and the effect the hold may have on the purposes for which the funds were appropriated. All of this must be done within 45 calendar days of the date when the hold begins.

At Friday's open hearing with former U.S. Ambassador to Ukraine Marie Yovanovitch, Republican counsel Steve Castor suggested the formal hold on the funds may have begun a full month after the Pentagon announced that money was on its way to Ukraine. He told Yovanovitch the funds were stalled for 55 days, "from July 18 to September 11."

Trump has offered two justifications for holding up the Ukraine money: to pressure European nations to increase their security assistance for Ukraine and to ensure that the new administration of President Volodymyr Zelenskiy was truly cracking down on corruption. No evidence has yet emerged in the impeachment inquiry that the Trump administration was actively pressuring European partners to step up their aid to Ukraine during the weeks when U.S. assistance was on hold. Nor has evidence emerged that Ukrainian authorities were explicitly put on notice that the White House was withholding the funds until Ukraine showed it was truly fighting corruption.

Acting White House chief of staff Mick Mulvaney added a third reason for holding back the assistance: to pressure Zelenskiy to investigate a debunked conspiracy theory that Ukraine, not Russia, had hacked the Democratic National Committee's server in 2016. Mulvany told reporters last month that Trump had spelled out to him the reasons for suspending the Ukraine aid. "Did he also mention to me in passing the corruption related to the D.N.C. server? Absolutely. No question about that," Mulvaney declared. "That's why we held up the money."

4. Why the withheld Ukraine assistance was released the night of Sept. 11.

If Trump was truly holding back the aid to spur greater contributions from Europe, or to foster greater anti-corruption efforts by Ukraine, or even — as he seemed to imply in a July 25 phone call to Zelenskiy — to force Ukraine to investigate the DNC server theory, as well as Joe Biden and his son Hunter's activities in Ukraine, it's arguable that none of those aims had been reached when Trump finally released the aid.

There are three theories about why that happened.

One is that Trump was responding to the whistleblower complaint relayed by the intelligence community inspector general on Sept. 9 to the House and Senate intelligence committees, which prompted House Democrats to begin an investigation that same day into the complaint.

Asked if Trump acted because he got caught, Trump's special assistant Steven Groves was dismissive on Friday's Morning Edition. "Does that sound like the President Trump that you know?" he asked host David Greene. "Does that sound like how he's operated in the past — 'Oh my God, I got caught by some anonymous whistleblower, so I'd better make an act, I really don't want to do it?' It — it's insane!"

Another reason that Trump himself has given for releasing the aid is pressure from fellow Republicans on Capitol Hill. Trump told reporters on Oct. 2 a conversation with Sen. Rob Portman, R-Ohio, was decisive. "I gave the money because Rob Portman and others called me and asked," Trump said. "Because he called up: 'Please, let the money go.' "

Portman had already described that call to Fox News a week earlier. "We were kind of at the point where we had to obligate the funds, so they could be effective for Ukraine to defend itself, so we needed to get the money going," Portman said. "But I think the president was interested in trying to use the funds to get the Europeans to do more — that's what he said to me."

There's a third explanation some also find plausible for Trump's sudden change of heart on the Ukraine aid: the threat of imminent congressional action.

On the morning of Sept. 12, the Senate Appropriations Committee was meeting to mark up next year's defense spending bill. Sen. Richard Durbin, D-Ill., had already alerted colleagues that he planned to introduce an amendment at that meeting that would withhold some of the Pentagon's allocation until the Ukraine assistance was released. Several Republicans on the panel said they were ready to vote in favor of Durbin's measure.

Before Durbin could ask for a vote on his amendment, Sen. Lindsey Graham, R-S.C., said he had an announcement to make about the measure.

"I think the White House today has agreed to release the money," Graham said, adding he had no doubt Durbin's amendment was the reason the White House lifted its hold on the money. "That's why it was released, because I was gonna vote for it. So I think they've got the message. If you're listening in the Ukraine on C-Span, you're gonna get the money."

How much OMB staffer Sandy's deposition will tie up any of these loose threads may not be known until the official transcript of the closed-door session is released. It may well prove a window into what until now has been an opaque maneuver central to the Trump impeachment inquiry.