Accessibility links
Bobi Wine Vs. Uganda's 'Dictator': It's 'Dangerous To Sit Down And Resign To Fate' A year after the musician and activist was beaten by Ugandan security forces, he continues to protest President Yoweri Museveni's authoritarian rule, with plans to run against him in 2021. 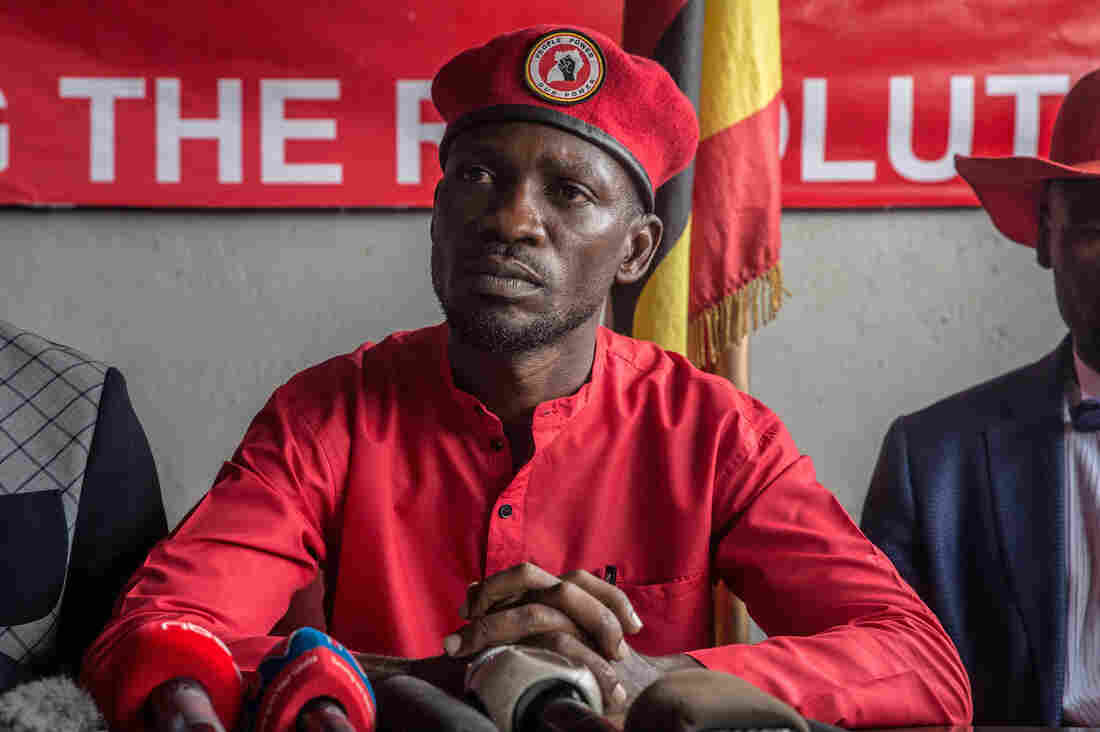 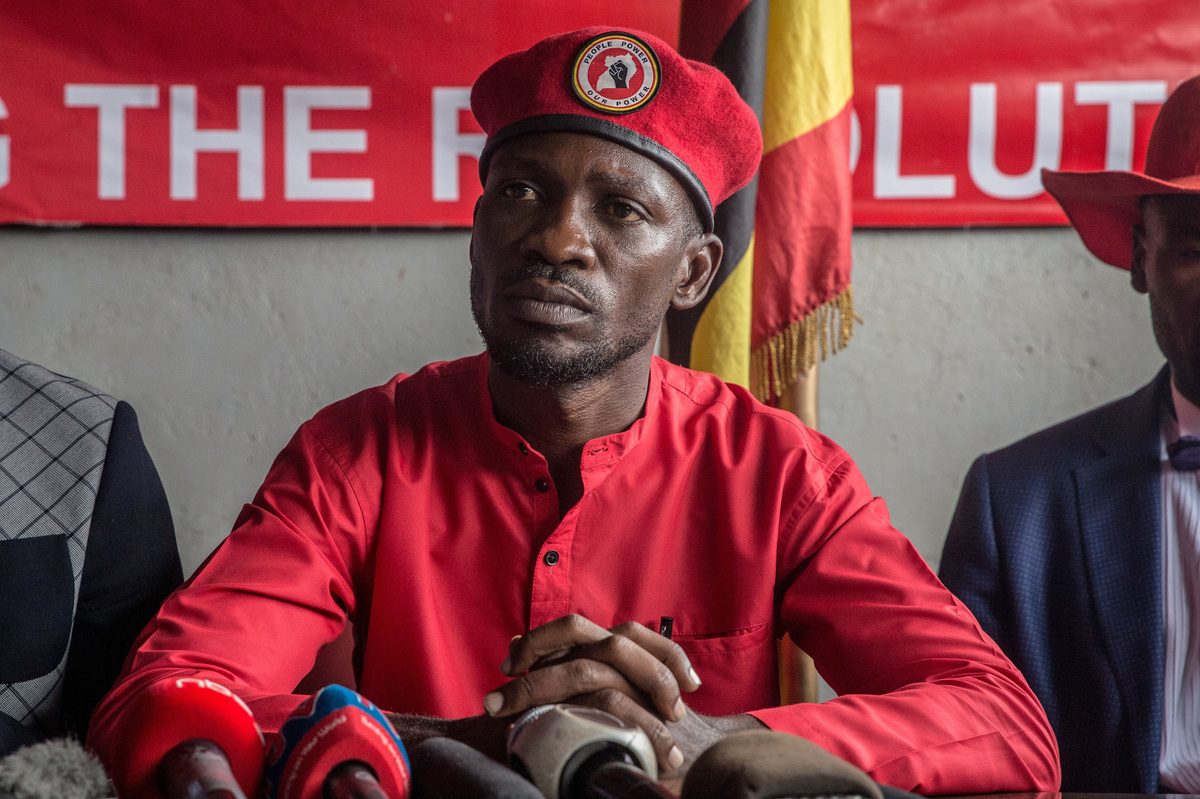 Musician and opposition candidate Bobi Wine holds a press conference, encouraging his "people power" supporters to continue wearing their trademark red berets in Kampala after the military banned them.

Bobi Wine, Uganda's pop singer-turned-politician, is one of the most vocal challengers of his country's longtime president, Yoweri Museveni.

Last summer, Wine was arrested and says he was beaten and tortured by presidential guards after clashes between opposition supporters and supporters of Uganda's ruling party.

"I'm supposed to be a dead man," he told NPR in September of last year, while he was in the U.S. for medical treatment.

Now, Wine, whose real name is Robert Kyagulanyi Ssentamu, is the president's biggest rival in 2021 elections. It follows his entry into politics when he was elected as a member of Uganda's Parliament in 2017.

"It certainly cannot be safe to run against a dictator, but it's even more dangerous to sit down and resign to fate," he says.

For the past three decades, Museveni — once seen as a progressive leader — has militarized his government by putting army officers in top administration and legislative positions. He's expanded the reach of the nation's army, known as the Uganda Peoples' Defence Forces. He's known for orchestrating violent suppressions of dissent.

When Wine first returned to Uganda last year, he was met with a massive military presence when his plane landed, ready to squash any protests supporting his homecoming. He's been in and out of jail since then.

For his part, President Museveni has said Wine was "waging war on our prosperity," telling the BBC last month that Wine "went to America and said that people should not come and invest in Uganda. That means he is an enemy of progress in Uganda."

Yet, as Wine spells out in his music, he doesn't consider himself an enemy of the military that's under Museveni's control. When Wine belts out the lyrics, "Why you really want to keep your people down?" he says he's sending a reminder that the opposition is fighting for a cause "that will better their lives as well."

"I have said it before and I continue to say it to our brothers and sisters in uniform, that we actually are not fighting them. We are fighting for them," Wine says. "They have terrible housing conditions. They have terrible salaries. There face so much injustice, especially in promotions. They face the same plight like we do or even worse."

Wine recently traveled again to the U.S. and talked with NPR's Scott Simon.

First of all, it's a deceitful rule. He lied to the people of Uganda that he was returning democracy and he promised that he was going to rule for four years and return power to civilian rule. It is 34 years later. Museveni's regime is a military dictatorship that has overlooked gross human rights [violations], massive corruption, massive unemployment — the deterioration of the education and health sector.

All that, we need to put it to an end. We want to return the rule of law and re-empower the citizens of Uganda so that finally power goes back to the hands of the people and they lead as a true servant of the people while the people of Uganda reign supreme.

On what he's asking from the U.S. ahead of the 2021 election

First of all, I want to pass a vote of thanks on my behalf and on behalf of the people of Uganda. Since last year, when we were asking the United States to hold the administration in Uganda accountable and to make the observation of human rights and the rule of law as a precondition for cooperation, we've seen the United States invoke the Magnitsky Act and the former police chief who presided over gross human rights abuses has been denied entry to the United States.

And not only that. ... Many dictators around Africa, and indeed around the world, fear one major thing: the camera, the spotlight. Keep the spotlight on us, and most importantly — to the United States citizens — mainly the Ugandans and Africans in the diaspora, to continuously do what they can to hold these leaders accountable. We request them not only to pay attention during the election, but before and after the election, because we know the dictatorship in Uganda is bent on unleashing terror on the people of Uganda.

On not being allowed to perform his music anymore

I am a musician, but I'm not allowed to practice my profession. My music was abolished and my concerts were blocked. President Museveni himself came out on BBC recently and said the reason why is because I had come to the United States and exposed the corruption and misrule of his government. And he has since branded me an enemy of Uganda's progress.

NPR's Peter Breslow, Denise Guerra and D. Parvaz produced and edited the audio version of this story. NPR's Emma Bowman and James Doubek produced it for the Web.