Accessibility links
Colorado Buffaloes Mascot Ralphie V Retires After 12 Seasons Because of her speed and temperament, Ralphie V, the 1,200-pound buffalo who leads the football team onto the field, has created safety concerns for her and her handlers, university officials say. 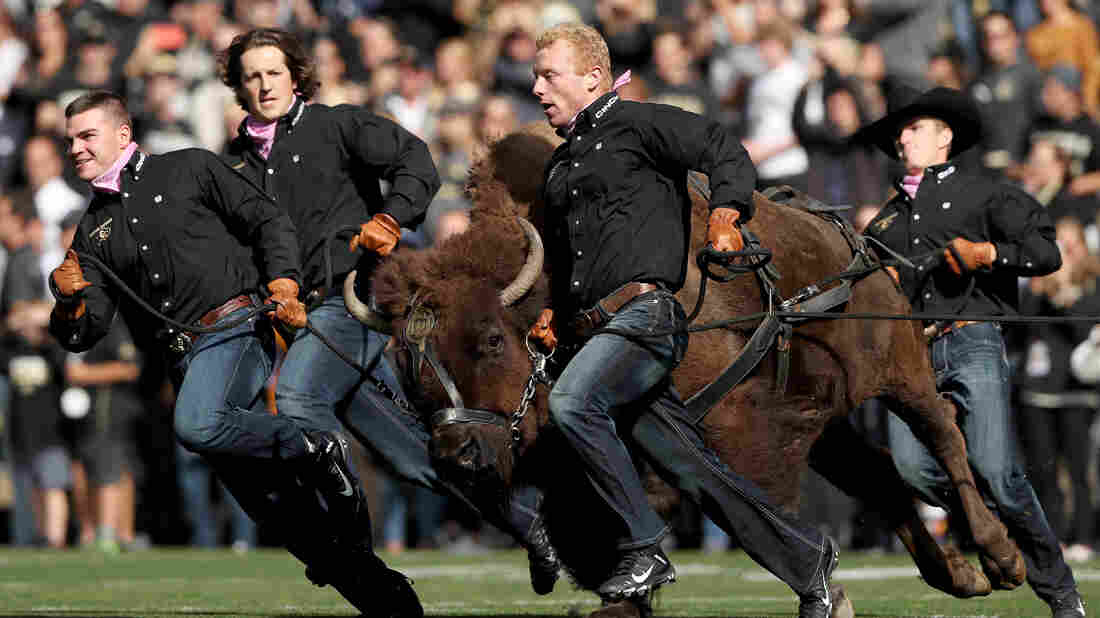 Ralphie V, mascot of the Colorado Buffaloes, is led onto the field before the team's game against the Arizona Wildcats at Folsom Field on Oct. 5 in Boulder, Colo. Matthew Stockman/Getty Images hide caption 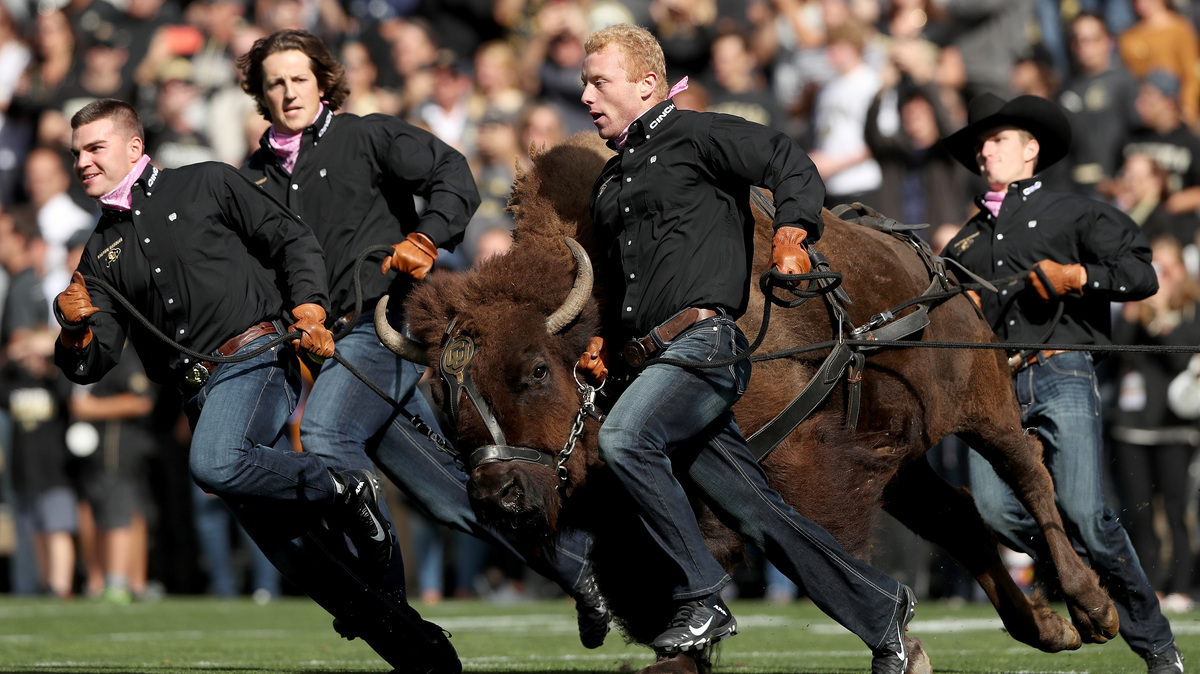 Ralphie V, mascot of the Colorado Buffaloes, is led onto the field before the team's game against the Arizona Wildcats at Folsom Field on Oct. 5 in Boulder, Colo.

After 12 seasons of leading the University of Colorado Boulder's football team onto the field, Ralphie V, the 13-year-old, 1,200-pound buffalo, is officially retiring as the school's mascot.

The reason? The athletic department says she's too fast.

"With past Ralphies, as they aged, their speed typically decreased; with Ralphie V, she has been so excited to run that she was actually running too fast, which created safety concerns for her and her handlers," according to press release from the university.

"She also wasn't consistently responding to cues from her handlers," the press release continued. "And her temperament was such that she was held back from leading the team out for CU's last two home games against USC and Stanford."

The Ralphie tradition goes back to 1934 at CU and has evolved over the years. This is the 53rd season that a live buffalo has led the team out on the field.

Ralphie V retires as the second-longest-serving Ralphie in the program's history running a total of 76 times. The original Ralphie ran 78 games over 12 seasons, according to the press release.

"As one of the biggest and fastest Ralphies, her love for running and power was showcased every home game during her career," John Graves, Ralphie Program manager since 2015 and a one-time handler said in a statement. "It's almost like she knew she was the queen of campus, and she loved to show that fact off when she ran onto the field and at her public appearances."

Ralphies run the field with a group of CU volunteer handlers, who are all varsity student-athletes. It's a physically demanding job; handlers have to train and practice five days a week to stay in physical shape to keep up with the buffalo.

CU's Ralphies — though formally bison and not buffaloes -- are beloved by students and often called one of the best live mascots in college sports.

But not everyone is a fan of these types of mascots, and the question of using animals in this way has come up recently.

People for the Ethical Treatment of Animals says live-animal mascots score an "F."

"Regardless of the length of time that they're kept in captivity, lions, tigers, bears, and other exotic animals don't 'get used to' being in public settings," an article on the organization's website says.

Earlier this year, PETA called on the University of Texas and the University of Georgia to end their use of live mascots after an incident where Bevo, the Texas Longhorns mascot, charged Uga, the Georgia Bulldogs dog mascot, before the teams' bowl game matchup.

"It's indefensible to subject animals to the stress of being packed up, carted from state to state, and paraded in front of a stadium full of screaming fans," PETA Senior Vice President Lisa Lange said in a statement.

"It's no surprise that a skittish steer would react to a perceived threat by charging, and PETA is calling on the University of Texas and the University of Georgia to learn from this dangerous incident, retire their live-animal mascots, and stick to the talented costumed mascots who can lead cheers, react to the crowd, and pump up the team," Lange said.

Still in good health, Ralphie V will spend her retirement on a ranch under the care of the program. Her handlers keep the location a secret, so fans don't overwhelm her and so opposing fans don't find out and harass or kidnap her, The Washington Post reports.

The university has been preparing for her replacement and officials are currently in the process of identifying potential candidates for their next mascot, who will be named Ralphie VI.

Ralphie V's final appearance will be during Colorado's final home game against Washington on Nov. 23, but she won't be running. She'll be a spectator in her pen, according to university officials.