Accessibility links
Review: Family Struggles Are A Gift To Readers In 'Christmas In Austin' In Benjamin Markovits' new novel, a far-flung family reunites in their home town of Austin for Christmas, bringing all their baggage. And while it's an emotional book, it never descends into pathos.

In 'Christmas In Austin,' Family Struggles Are A Gift To Readers

In 'Christmas In Austin,' Family Struggles Are A Gift To Readers 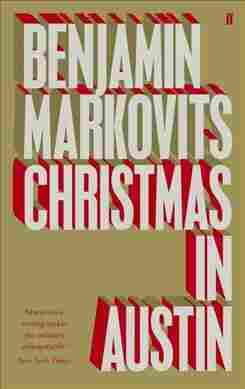 Take it from someone who's lived in the capital of Texas for 15 years: There are worse places to spend Christmas than Austin. You don't have to worry about getting snowed in; there's never too much distance between you and a bar; and you can always amuse yourself by playing games like "Is that guy walking down Guadalupe Street dressed like an elf because it's Christmas or just because this is Austin?"

For the four grown Essinger children, whom Benjamin Markovits follows in his excellent new novel Christmas in Austin, the city's a bit of a mixed bag. They're returning to their hometown for the holidays, and they're not quite sure how to feel about it — or they are, but they're afraid to put it into words. Markovits' book is a perceptive look at how families function in times of stress, and it's also a loving look at a city in a permanent state of flux.

Christmas in Austin opens with Liesel, the matriarch of the clan, fussing around her family's central Austin home, preparing to play host to 15 Essingers of various ages and temperaments. She's in the midst of an unspoken standoff with her son Paul, a newly retired professional tennis player who has moved to the nearby town of Wimberley, leaving his girlfriend and young son in New York. Liesel isn't pleased at the development, which Paul has picked up on: "You don't have to say anything and still they blame you for it, they get mad at you. Just for having a point of view."

Liesel finds that she'll be unable to count on her husband, Bill, for emotional support — just before Christmas, he has to fly to New York to visit his gravely ill sister. That leaves Liesel to deal with Paul and her other three children: Jean, who's getting ready to introduce her older boyfriend to her family; Susie, whose husband has convinced her to move to his native England; and Nathan, who's hoping that his chronic health condition doesn't prevent him from getting a federal judgeship that he's long coveted.

'Last Of Her Name' Urges Readers: Only Connect

As if that weren't enough, the family has to reckon with the presence of Dana, Paul's ex-girlfriend, whom Liesel impulsively invited to spend Christmas with the family. And then there are the kids, including Ben, a sensitive but mildly jerky 12-year-old, and Cal, Paul and Dana's toddler son, who comes down with a severe cold at the worst possible time.

Markovits' novel explores the relationships between the family members through a series of conversations as the clan tries to come together to celebrate Christmas. He paints a vivid portrait of the "family as information-producing machine ... decision-requiring machine ... argument-creating machine ... catering company and cleaning service ... childcare and school." Anyone who's been in the middle of a family trying to maintain normalcy at a fraught time is bound to relate.

The author proves to be a master at capturing family dynamics. The characters' dialogue is frequently punctuated with ellipses, indicating their struggle to put their thoughts into something linear. It's clear the Essingers love one another, sometimes failing in their attempts not to step on one another's toes: "It's very hard to take sides ... you don't actually have to take sides ... and yet, when everybody comes together, you can't help but feel the pull of different allegiances."

'Christmas in Austin' is an emotional book that never descends into pathos.

Christmas in Austin is an emotional book that never descends into pathos. In one scene, Liesel learns that Nathan might be unable to make it to Texas for the holidays, and she tears up — it's a simple, understated reaction that makes the scene all the more heartbreaking. In another, Dana wonders if spending Christmas with her former kind-of-in-laws was a mistake: "What am I doing here, she thought. Paul doesn't need me, really he just wants Cal. Nobody loves me here, everybody's nice, but it's not like I'm anyone's first choice." Markovits presents everyday miseries in a way that's affecting but never manipulative.

Markovits' novel takes place mostly in Austin's North University neighborhood, and it's hard to imagine a more realistic portrayal than the one he offers here. His characters talk about getting margaritas at Trudy's, a "frat-boy Mexican restaurant," dodge the advances of drunk guys at the coffee shop Spider House, and buy eggnog at upscale grocery store Central Market. (Markovits accurately portrays the nightmare that is the latter establishment's parking lot.) He's also perceptive about Austin as a whole, noting that it's something of "a two-tier city — for the young, good-looking, successful types, who wouldn't be out of place in Brooklyn or San Francisco. And for everybody else."

Austinites will find much to appreciate in Markovits' book, but the novel is bound to appeal to anyone who's a fan of the psychological realism of authors like Ann Beattie or Anne Tyler. He seems to suggest that nobody is ever really home, even when they're in the house they grew up in, and that families are less cohesive units than they are collections of people who are constantly and unpredictably changing. Markovits is a wonderful writer, unfailingly sensitive and intelligent, and Christmas in Austin is a gift.