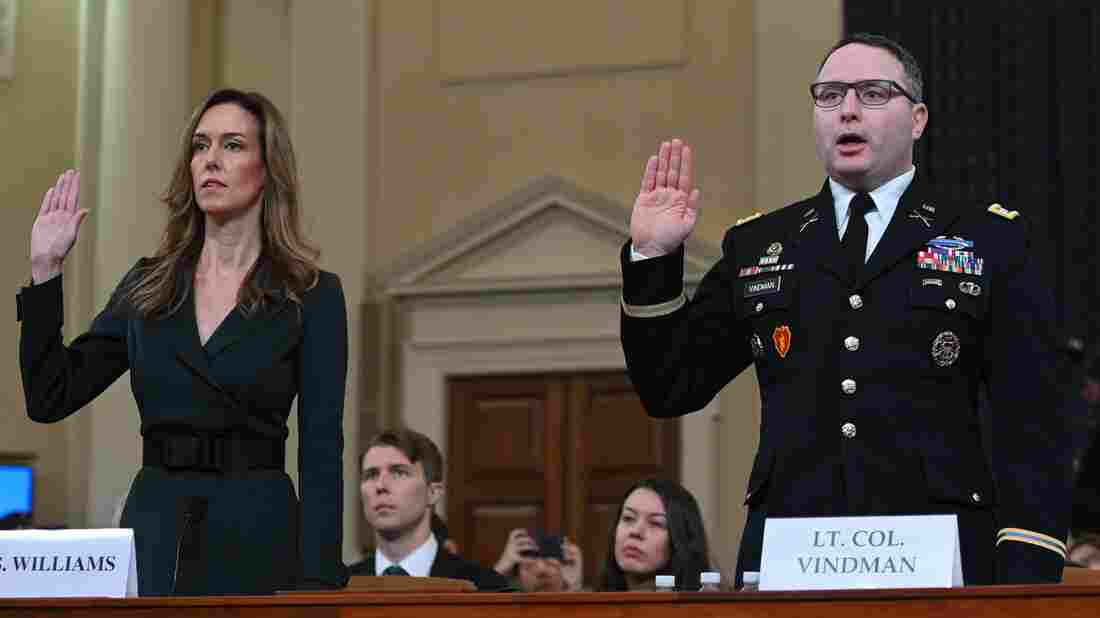 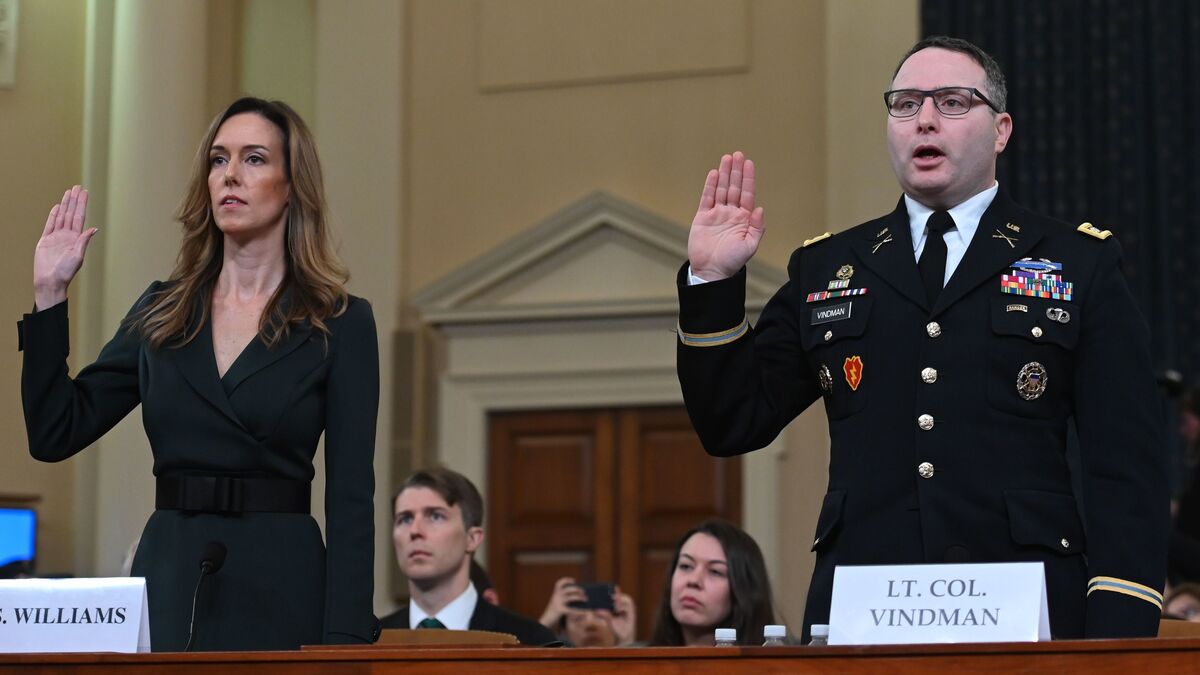 Jennifer Williams and Lt. Col. Alexander Vindman take the oath before testifying during the House Intelligence Committee hearing on Tuesday.

Four witnesses are testifying in front of the House Intelligence Committee on Tuesday, starting the second week of public hearings in the ongoing impeachment inquiry investigation.

NPR will post the witnesses' opening statements below as they are released.

Williams first testified behind closed doors on Nov. 7 and answered questions about her involvement listening in on the July 25 phone call between President Trump and Ukrainian President Volodymyr Zelenskiy — as well as Vice President Pence's meeting with Zelenskiy during Pence's trip to Poland in September.

In her closed-door testimony, Williams characterized the July 25 call as "unusual" — a comment that garnered criticism from the president, who referred to her as a "Never Trumper" Sunday on Twitter.

Williams also told investigators that the vice president did not talk about any potential investigations into the Biden family, Burisma Holdings or the 2016 election with Zelenskiy, but she said the two leaders did discuss the status of U.S. aid to Ukraine.

Vindman, a military officer specializing in Ukraine and currently serving on Trump's National Security Council, will testify alongside Williams.

In his closed-door testimony on Oct. 29, Vindman confirmed he had been present on the July 25 call and that he had expressed concerns about the discussion afterward to the NSC legal staff.

Vindman also noted the measures taken to store the call transcript, telling investigators it was placed in a "different, more secure system."

The former U.S. envoy to Ukraine will testify Tuesday evening after appearing before investigators two weeks ago in a closed-door hearing.

Volker is one of the self-proclaimed "three amigos," alongside U.S. Ambassador to the European Union Gordon Sondland and Energy Secretary Rick Perry, who were seen as more reliable actors in pressuring Ukraine, according to top State Department aide George Kent.

According to the transcript of Volker's closed-door testimony on Oct. 3, he confirmed that Trump's personal attorney Rudy Giuliani wanted Ukraine to issue an "anti-corruption statement" announcing investigations into Burisma Holdings and potential interference in the 2016 election. He also downplayed the significance of the holdup of military aid to Ukraine, though.

"I don't believe — in fact, I am quite sure that at least I, Secretary Pompeo, the official representatives of the U.S., never communicated to Ukrainians that it is being held for a reason. We never had a reason," he testified.

Morrison, the former top European affairs official for the National Security Council, testified behind closed doors on Oct. 31. He has corroborated the claim that the White House solicited help from Ukraine for investigative assistance into Burisma and the Bidens, highlighting Sondland's role in particular.

Morrison also confirmed that he was on the July 25 call but said he believed the president's actions on the call were not illegal.

Morrison resigned from his post at the NSC after testifying, a move that was first reported by NPR the day before he appeared on Capitol Hill.