Accessibility links
Apollo 12 Is NASA's Forgotten Mission To The Moon. Everyone knows about Apollo 11, the first moon landing. And about ill-fated Apollo 13. Between them is the forgotten mission — Apollo 12. 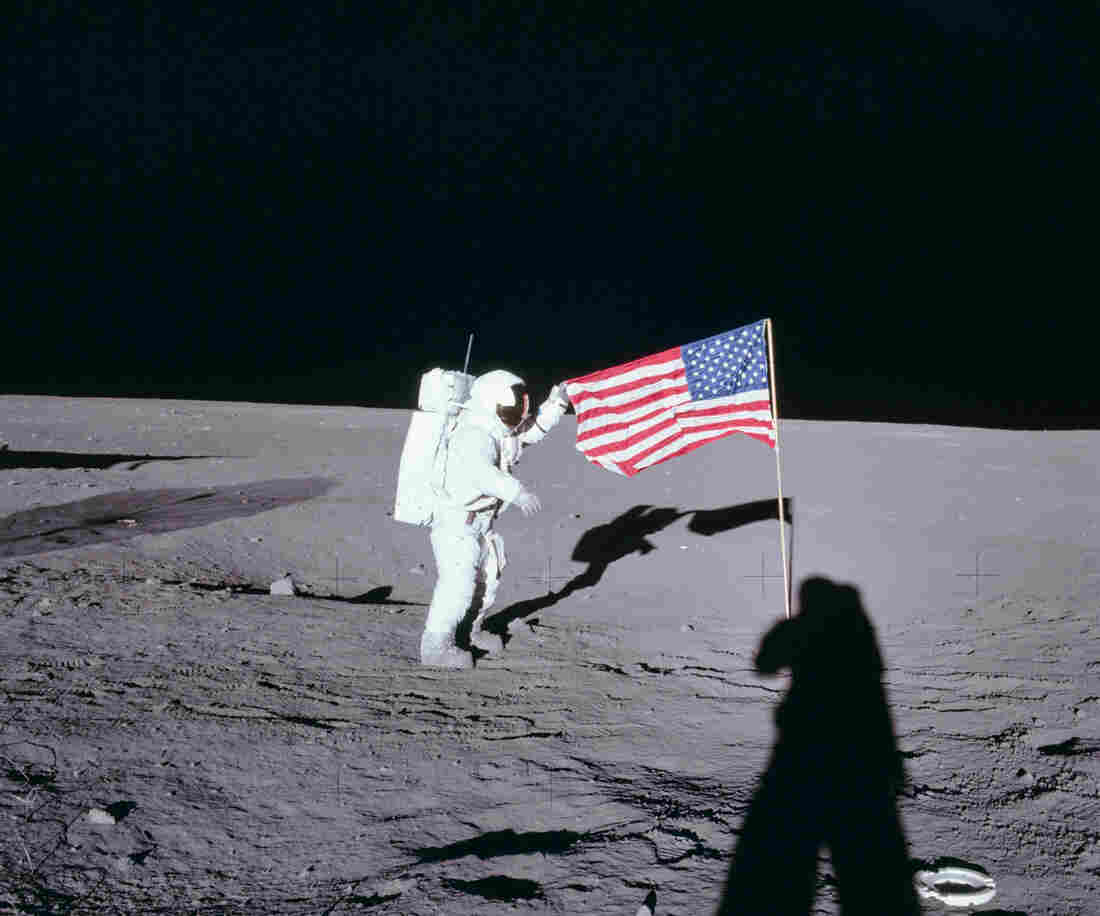 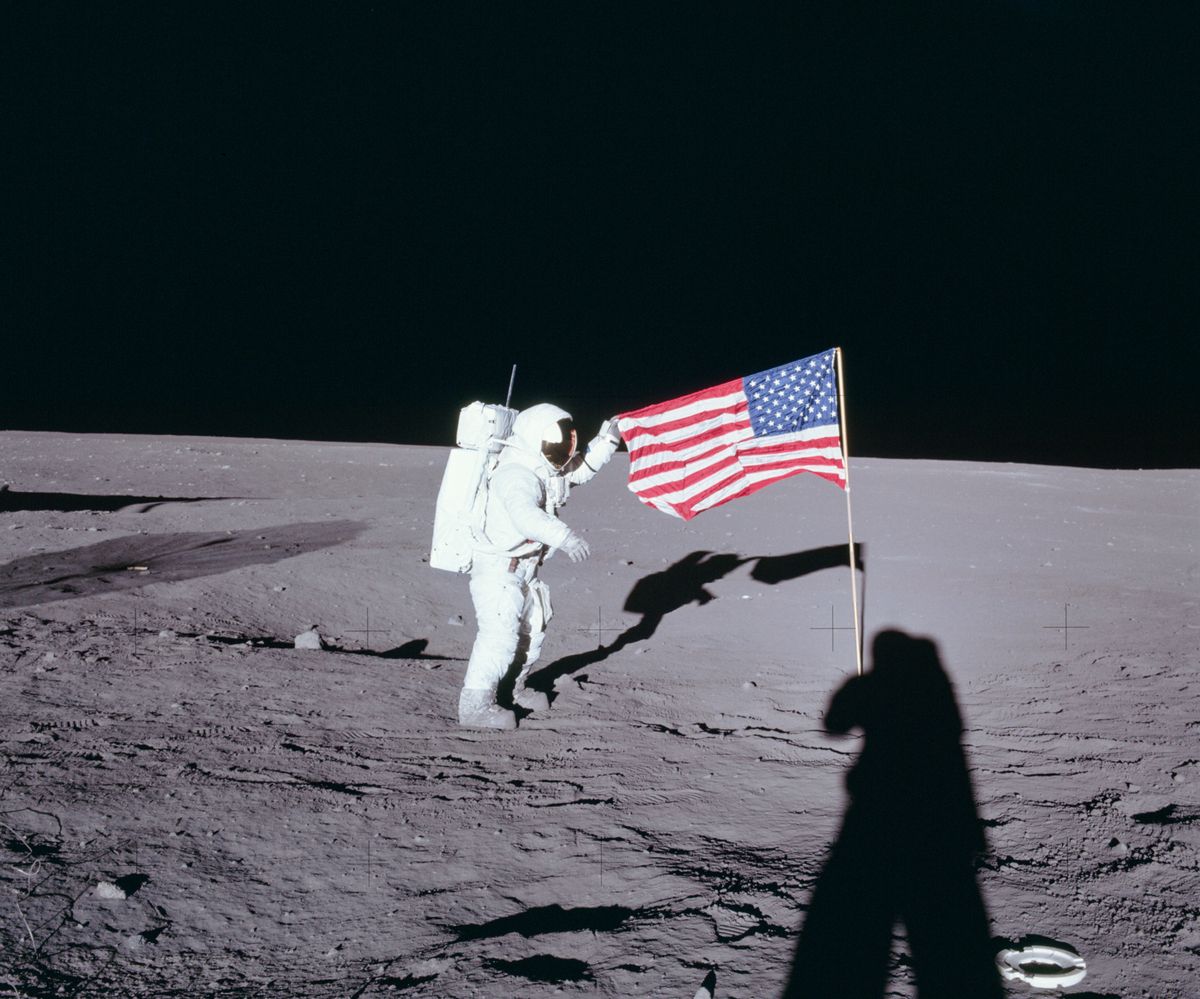 From NASA: Apollo 12 commander Charles "Pete" Conrad unfurls the United States flag on the lunar surface during the first extravehicular activity on Nov. 19, 1969.

Fifty years ago, astronaut Pete Conrad stepped out of the lunar module onto the surface of the moon.

His first words were: "Whoopie! Man, that may have been a small one for Neil, but that's a long one for me."

Conrad, who stood at just 5 feet 6 inches tall, was only the third human to set foot on the lunar surface. He did it on November 19, 1969, just four months after Neil Armstrong and Buzz Aldrin made the first lunar landing. However, unlike Armstrong and Aldrin, Conrad and fellow astronaut Alan Bean are not household names.

"Whoopie! Man, that may have been a small one for Neil, but that's a long one for me."

Their mission, Apollo 12, remains largely unknown, according to Teasel Muir-Harmony, the curator of the Apollo Collection at the Smithsonian National Air and Space Museum in Washington, D.C. And it's a shame, because it was, frankly, a really fun trip, she says.

"This crew was hilarious," Muir-Harmony says. "They were really entertaining."

Apollo 12 got off to an inauspicious start. There were thunderstorms on the day of the launch, and the rocket was actually struck by lightning — twice — as it ascended skyward. "That led to electrical problem that shut down a lot of the controls," she says.

On Apollo 11 Anniversary, A Former Crew Member Reflects On The Lunar Trip

Fortunately the rocket kept flying, and with the help of Mission Control, the astronauts were able to restore power to all of their systems.

"Think we need to do a little more all-weather testing," Conrad said wryly as the Saturn V rocket shot into orbit.

That was the dramatic beginning of what turned into kind of a goofy road trip. Pete Conrad, the mission commander, brought up a tape deck (as commander, he also set the playlist: Dusty Springfield, Elvis, and some classic country).

He and fellow astronauts Bean and Richard Gordon had all met as pilots in the Navy. 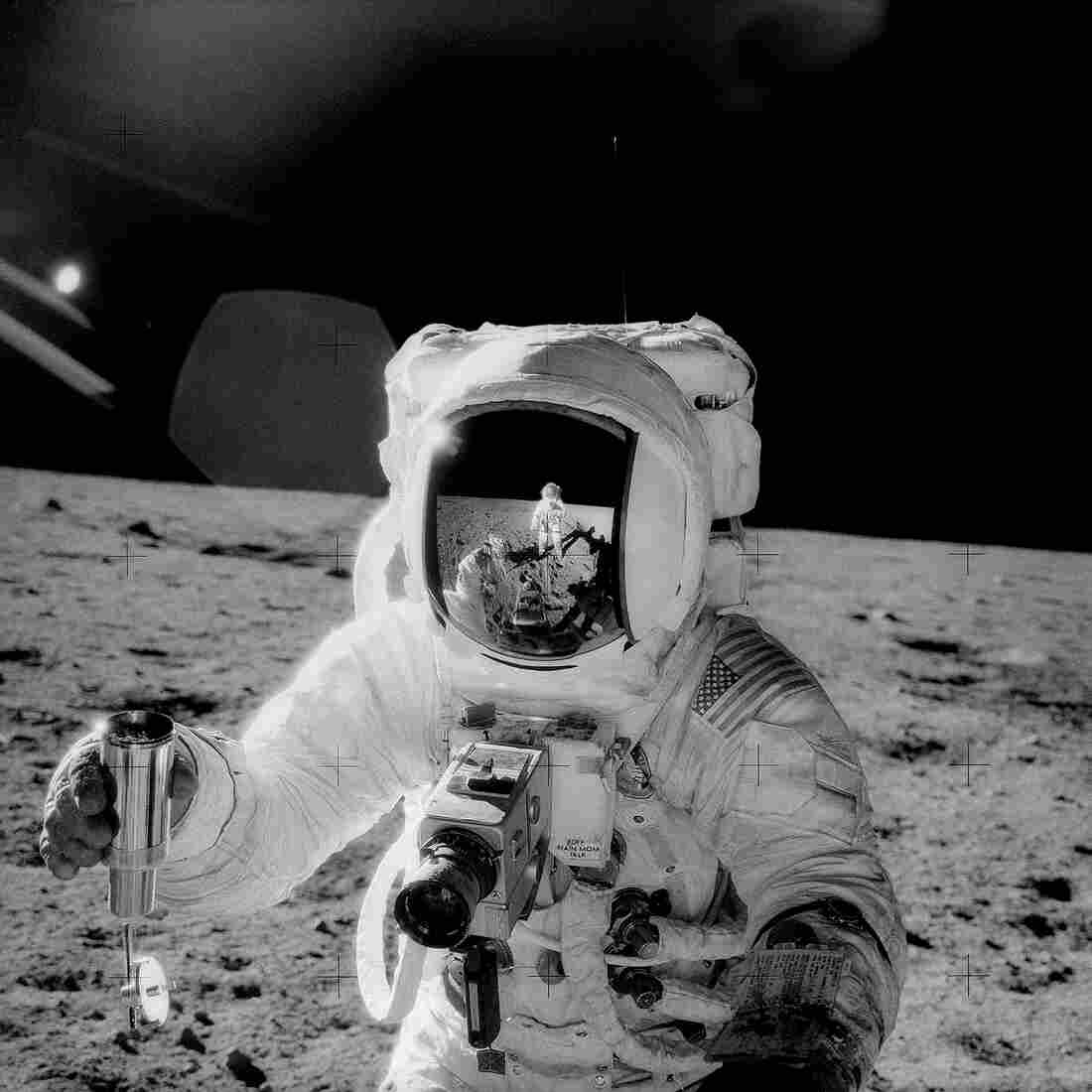 Alan Bean and Pete Conrad were the third and fourth people to walk on the moon. NASA hide caption 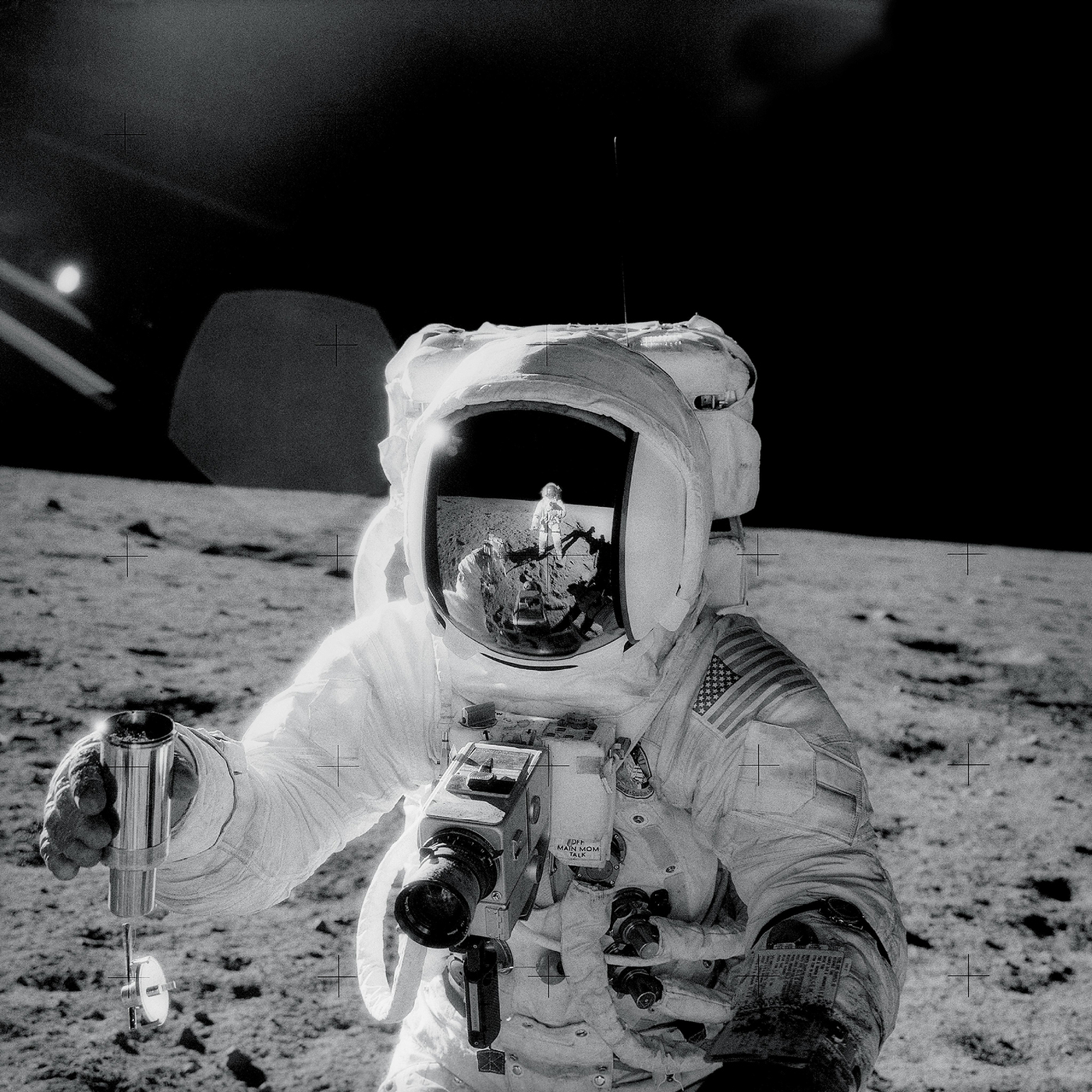 Alan Bean and Pete Conrad were the third and fourth people to walk on the moon.

"These guys were all friends, they all knew each other before they became Apollo astronauts," Muir-Harmony says.

He nailed the landing, on the edge of a crater and just 600 feet from a robotic probe known as Surveyor III. As part of their planned activities, the astronauts later visited the spacecraft, the only time humans have gone to poke a robotic probe sent ahead of them.

Conrad first words as he stepped onto the surface were actually part of a bet with a journalist, Muir-Harmony says. She had asked Conrad whether the U.S. government had dictated Neil Armstrong's first words. "And he made a bet (I think it's about a $500 bet) saying, 'No, we can say whatever we want. We're not being told what to say by the government.'"

That was not the only gag on Apollo 12. The astronauts' cuff checklists, small binder guides strapped to their arms, contained silly cartoons and several nude Playboy models that were slipped in by the backup crew. The nudes were accompanied by instructions such as: "Survey - her activity."

Muir-Harmony says the astronauts kept that joke to themselves. Even at the time, the crude gag probably wouldn't have gone over well with either conservative America or the burgeoning women's movement. And it says a lot about gender in the space program at the time: "The role of women in space was seen as entertainment or pleasure as opposed to an equal colleague," she says. 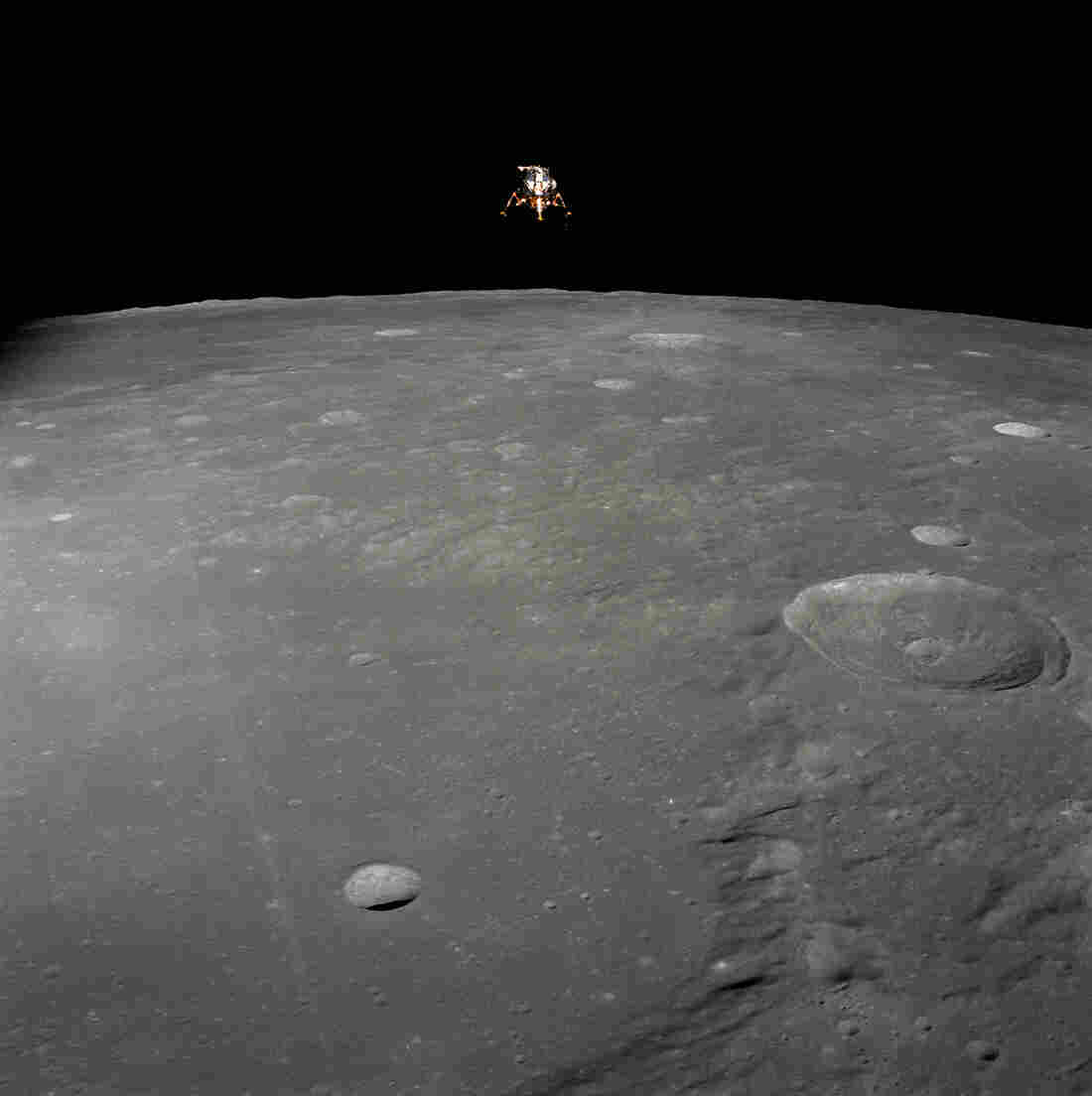 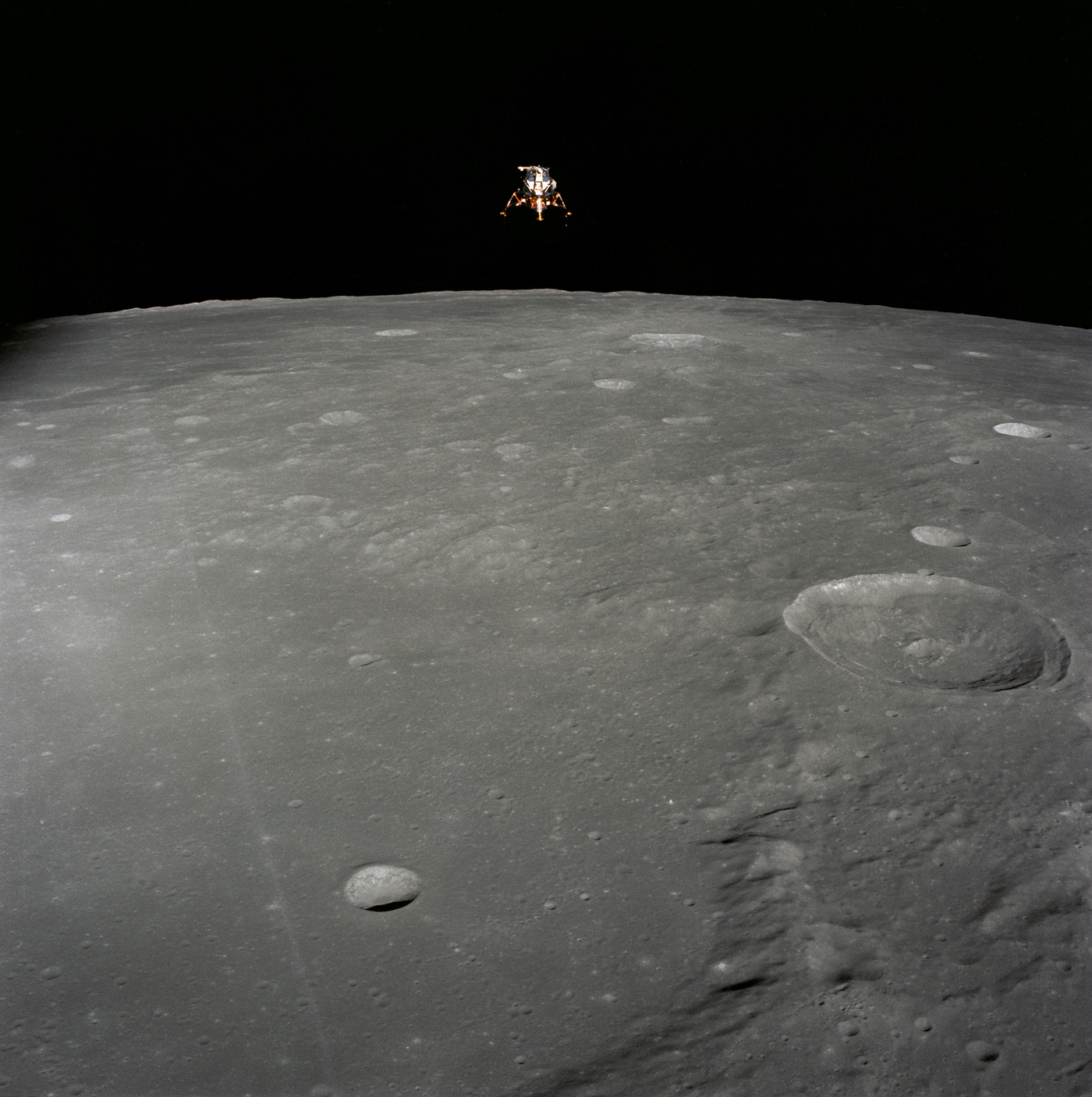 Unfortunately, there's very little footage of the astronaut's antics. Shortly after landing, Bean accidentally pointed the lunar surface TV camera directly at the Sun, frying its circuitry. The lack of images may be one reason that the mission is not as well remembered as some of the others, Muir-Harmony says.

Conrad and Bean lifted off on November 20. Conrad let Bean drive the lunar module a little bit, even though he wasn't supposed to. They returned to Earth and made a perfect landing in the Pacific.

Although they received the same honors as the Apollo 11 crew, things were different. The Apollo 12 astronauts had dinner with President Richard Nixon at the White House, Muir-Harmony says. "But they could tell that Nixon's focus was elsewhere,"

The president was trying to negotiate an arms control treaty with the Soviets. Meanwhile, in Vietnam things kept getting worse. On the second day the astronauts were on the moon, pictures emerged of a massacre at a town called My Lai.

Muir-Harmony believes this is the real reason Apollo 12 never got much attention. "It's hard to feel optimistic and excited and focused on exploration when these horrible atrocities are happening on earth," she says.

But for what it's worth, the astronauts had a pretty good time.