Accessibility links
Gordon Sondland Returns To Impeachment Inquiry As A Key Witness With An Updated Story The U.S. ambassador to the EU will give much-anticipated public testimony Wednesday in the impeachment inquiry of President Trump. His story has changed since he first testified last month. 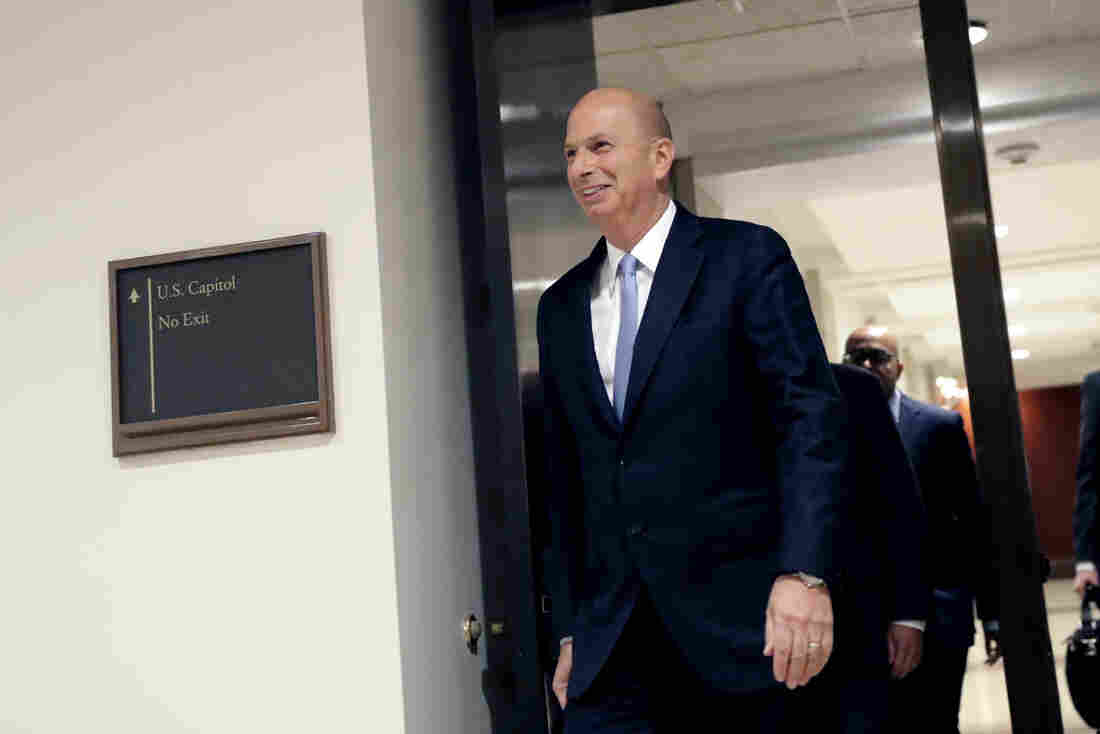 U.S. Ambassador to the EU Gordon Sondland on Capitol Hill on Oct. 17. Sondland will give much-anticipated public testimony Wednesday in the impeachment inquiry of President Trump. His story has changed since he first testified last month. Pablo Martinez Monsivais/AP hide caption 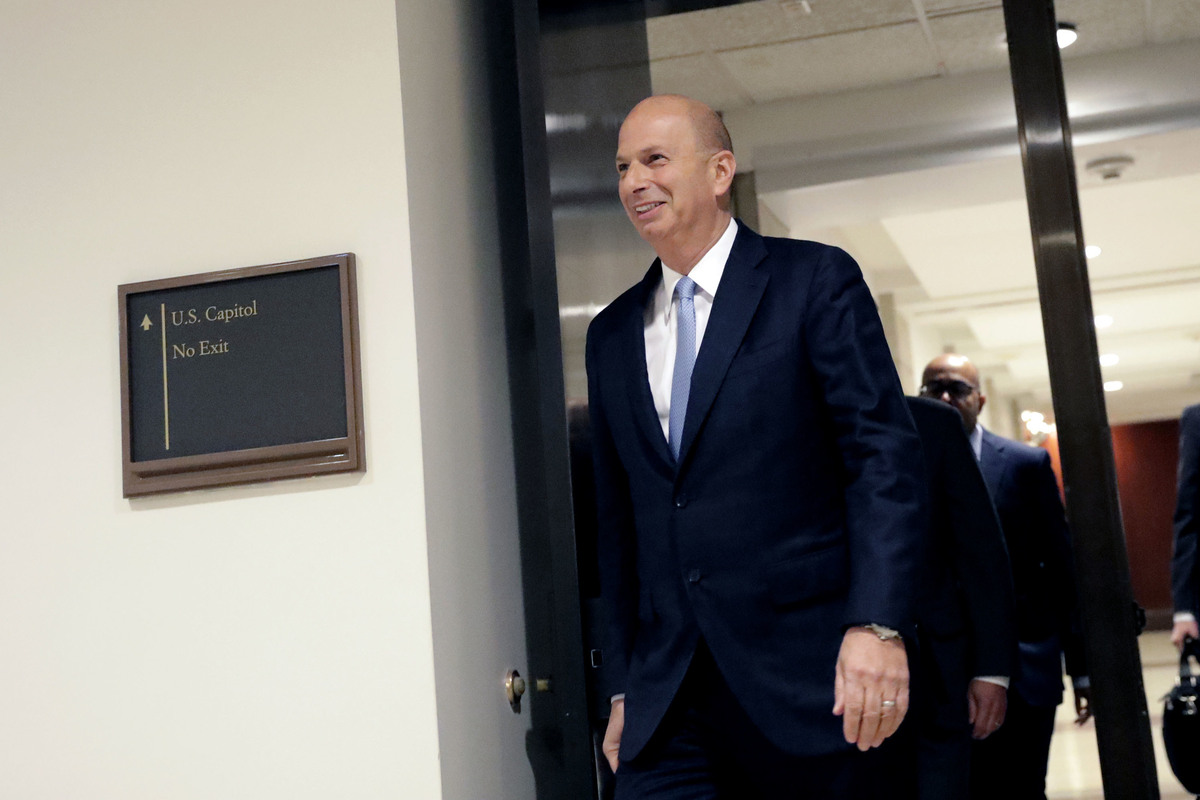 U.S. Ambassador to the EU Gordon Sondland on Capitol Hill on Oct. 17. Sondland will give much-anticipated public testimony Wednesday in the impeachment inquiry of President Trump. His story has changed since he first testified last month.

Gordon Sondland, the U.S. ambassador to the European Union, who has emerged as the impeachment inquiry's most pivotal witness, is set to make a much-anticipated appearance before House investigators on Wednesday.

Sondland will face lawmakers who have many questions about conversations he had with President Trump about U.S. aid to Ukraine — and why his story changed since he first appeared before them in a closed-door session last month.

"He has some big explaining to do," says former Watergate prosecutor Nick Akerman. "You've got a whole bunch of witnesses now that have contradicted him, and he's got some serious explaining to do as to what the facts are and what he really remembers at this point, particularly since he's changed his testimony once already."

Sondland, a hotel developer in Portland, Ore., was confirmed as ambassador in June 2018. Trump tapped Sondland for an additional assignment handling Ukraine-U.S. policy with Energy Secretary Rick Perry and Kurt Volker, then the U.S. special representative for Ukraine.

It's this assignment that connects Sondland to the Democrats' impeachment inquiry, which was sparked by a whistleblower complaint alleging that on a July 25 phone call, Trump delayed military aid for Ukraine to pressure Ukrainian President Volodymyr Zelenskiy to investigate former Vice President Joe Biden and his son, Hunter.

Sondland first testified in October that he did not know about any plan to hold up U.S. military aid to Ukraine in exchange for investigations into the Democratic National Committee and Joe Biden.

Eighteen days later, on Nov. 4, Sondland's lawyers submitted a three-page addendum to the House Intelligence Committee that stated that the testimony of two other witnesses had "refreshed" his memory about a conversation he had with a top Ukrainian official named Andriy Yermak on Sept. 1. The addendum says:

"I now recall speaking individually with Mr. Yermak, where I said that resumption of U.S. aid would likely not occur until Ukraine provided the public anti-corruption statement that we had been discussing for many weeks."

It is now known that the statement was to affirm investigations that Trump wanted into Joe Biden and his son, who was on the board of a major Ukrainian energy company called Burisma.

And in the last few days, another revelation: According to a State Department official named David Holmes, Sondland was pushing the investigation into the Bidens because Trump wanted him to.

In closed-door testimony last Friday, Holmes told House investigators that on July 26, he was with Sondland at a restaurant in Kyiv, the Ukrainian capital. This was one day after the call between Trump and Zelenskiy. At that restaurant, Sondland got on the phone with Trump, who was talking so loudly that Holmes could hear the back-and-forth.

According to Holmes, after that call Sondland said the president didn't really care about Ukraine and only cared about "the big stuff that benefits the president." Sondland then cited the "Biden investigation."

This is the crux of what House investigators want to question Sondland about on Wednesday — because it's the opposite of what he said in his original testimony. Back then he testified that he had no idea that the Bidens were the subject of this anti-corruption push in Ukraine.

Akerman, the former Watergate prosecutor, said that forgetting key details like these is "pretty exceptional" given that they involved conversations with the president of the United States.

"If you go back to Watergate and [counsel to President Nixon] John Dean's testimony, one of the things that he said in his testimony ... [was] that the reason he could remember these conversations so vividly was because he was talking to the president of the United States," Akerman says. "It just defies common sense that Ambassador Sondland would not remember the conversations he had with Donald Trump."

And, Akerman says, Sondland has a lot riding on what happens on Wednesday. He says Sondland could face charges of perjury before Congress as well as obstruction of a congressional investigation.

"Both of those are serious felonies and carry up to five years in prison. Somehow, I don't think Mr. Sondland wants to put himself in that position," Akerman says. "I think there's a lot of pressure on him right now to really fess up, tell what happened, be very complete and do a mea culpa in order to avoid any kind of criminal liability."

Sondland's testimony will be closely watched for another reason: His direct conversations with the president make his testimony key to understanding whether Trump manipulated U.S. foreign policy for his own political gain.

Marc Rivers produced this story for broadcast with editors Arezou Rezvani and Shannon Rhoades. Heidi Glenn adapted it for the Web.

In a previous version of the audio, we misidentified Rep. Earl Blumenauer as Earl Blumenthal.