Accessibility links
More Officials Testify After Sondland Gives Impeachment Testimony A Pentagon official said Ukraine asked about the military aid on July 25, the day the nations' leaders spoke. It has been assumed that Kyiv wasn't aware the funding was put on hold until much later. 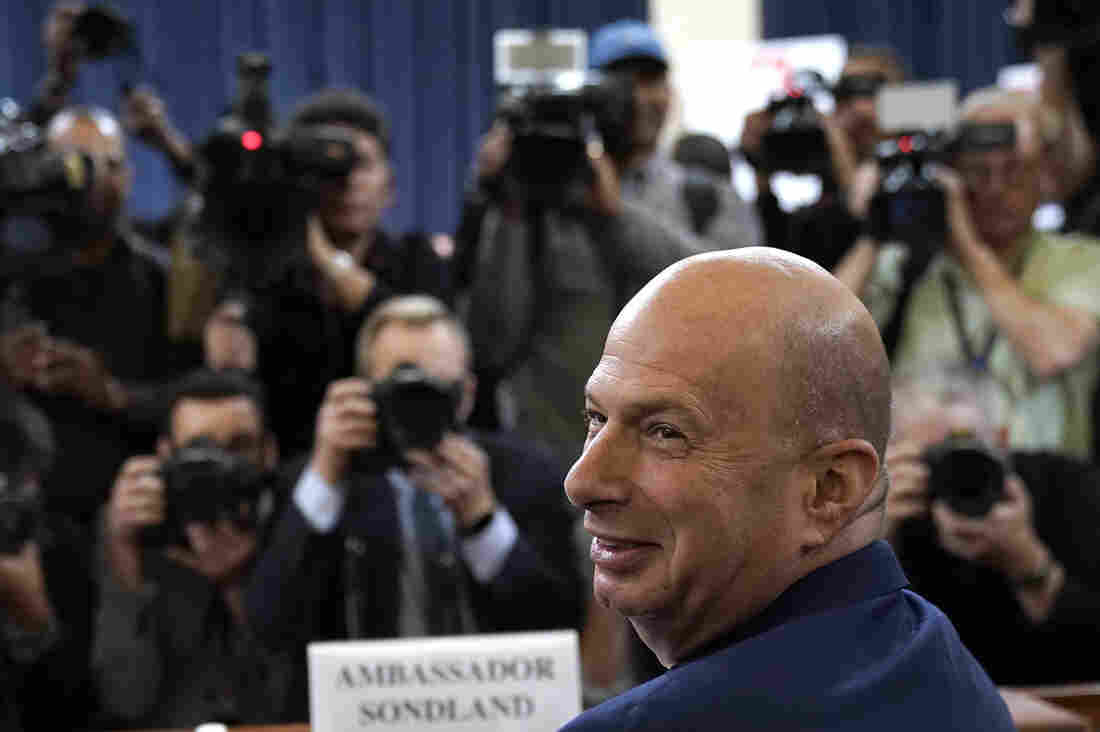 "Was there a 'quid pro quo'?" Ambassador to the European Union Gordon Sondland said in his opening remarks to House Intelligence Committee."With regard to the requested White House call and White House meeting, the answer is yes." Win McNamee/Getty Images hide caption 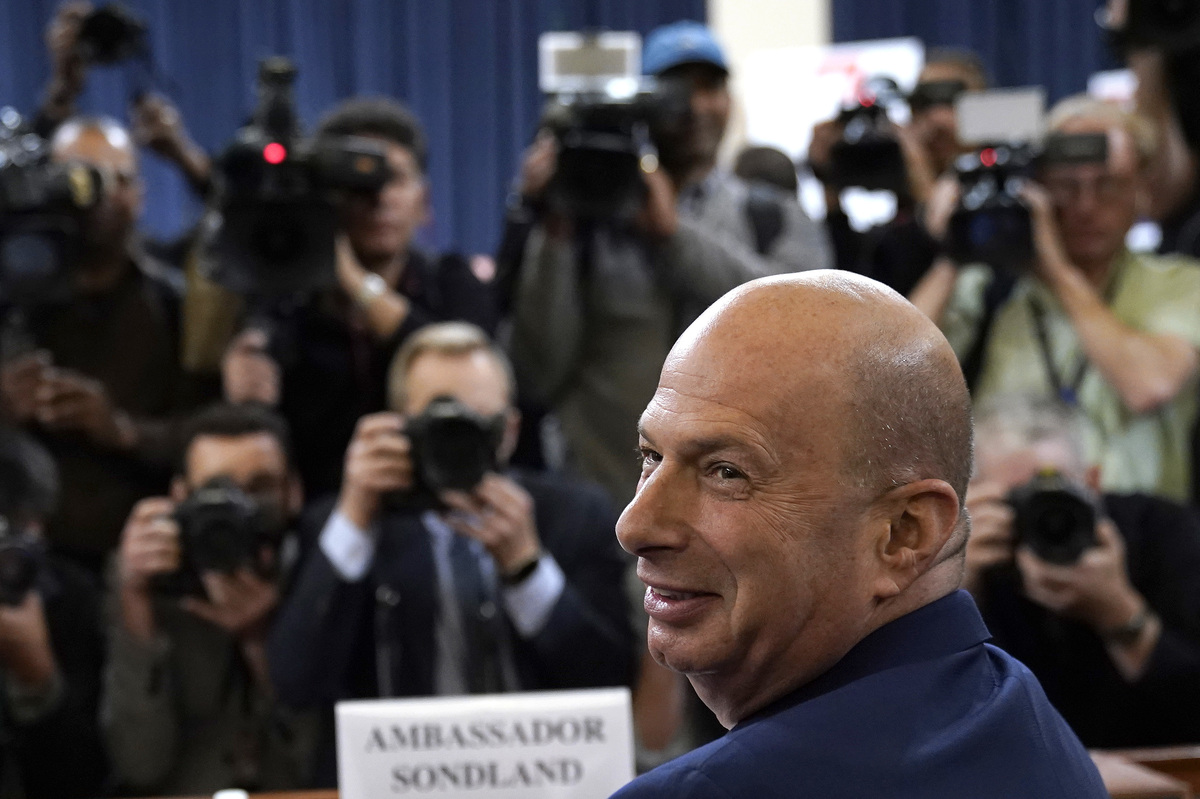 "Was there a 'quid pro quo'?" Ambassador to the European Union Gordon Sondland said in his opening remarks to House Intelligence Committee."With regard to the requested White House call and White House meeting, the answer is yes."

Gordon Sondland, the U.S. ambassador to the European Union, tied President Trump directly to conditioning a meeting with the Ukrainian president with "a public statement from President Zelenskiy committing to investigations of Burisma and the 2016 election."

Trump's personal attorney Rudy Giuliani "expressed those requests directly to the Ukrainians," Sondland said in his opening statement at the public impeachment hearings on Wednesday. "Mr. Giuliani also expressed those requests directly to us. We all understood that these prerequisites for the White House call and White House meeting reflected President Trump's desires and requirements."

"Was there a 'quid pro quo'?" Sondland said in his opening remarks."With regard to the requested White House call and White House meeting, the answer is yes."

There were more revelations later in the day: Laura Cooper, a deputy assistant secretary at the Defense Department, whose portfolio includes policy for Eastern Europe, told House lawmakers that the Ukrainian Embassy asked about the security assistance on July 25, the day the Trump spoke to Zelenskiy. That's an earlier date than in past accounts — and undercuts a key Republican talking point defending the president: There was no wrongdoing because the Ukrainians weren't even aware that a hold was put on the aid.

Cooper said she was made aware by her staff of the Ukrainians asking about the aid only after the release on Nov. 11 of the transcript of her Oct. 23 deposition.

Additionally, David Hale, a senior State Department official, said he learned about the hold during a July 26 meeting at which an Office of Management and Budget official had said that the president objected to releasing the funds.

"In the loop" or "completely exonerates"?

Sondland, who spent most of his career as a real estate and hotel developer, provided the most explicit link yet of the secretary of state's role in the Ukraine affair. He said he kept Mike Pompeo and other senior State Department officials abreast of his contacts with Giuliani, who "specifically mentioned the 2016 election (including the DNC server) and Burisma as two topics of importance to the president."

"They knew what we were doing and why," Sondland said of Pompeo and the others. He added, "Everyone was in the loop."

"[Sondland] testified to the fact that President Trump never told him that a White House meeting or the aid to Ukraine was tied to receiving a public statement from President Zelensky," said White House press secretary Stephanie Grisham.

The State Department in a statement denied that version of events.

Sondland, a major donor to Trump's inauguration, has emerged as a pivotal witness as the Democrats attempt to make the case that the president sought an investigation into former Vice President Joe Biden and his son Hunter from Ukraine's newly elected president in exchange for the resumption of military aid and a White House visit. Hunter Biden was on the board of the Ukrainian energy company Burisma.

Trump denies any such linkage was made.

Get Caught Up: Key Takeaways From Tuesday's Impeachment Hearing

Schiff asked Sondland, who testified Wednesday under subpoena, whether the president conditioned a White House meeting with Zelenskiy on Ukraine conducting investigations into Burisma and a debunked theory alleging Ukrainian interference in the 2016 election.

Sondland responded that Zelenskiy "had to announce the investigations, he didn't actually have to do them, as I understood it."

But in an exchange that Republicans would highlight, Sondland said, "President Trump never told me directly that aid was conditioned on the meetings."

In a lighter moment, when asked whether he recalled telling Trump in a September phone call that Ukrainian President Volodymyr Zelenskiy "loves your ass," Sondland laughed and said, "It sounds like something I would say. That's how President Trump and I communicate, a lot of four-letter words. In this case three-letter."

Sondland also said he merely "followed the president's orders" in working with Giuliani, even though he, Energy Secretary Rick Perry and Kurt Volker, the then special envoy to Ukraine, "did not want to work with" the president's personal lawyer. "Simply put, we played the hand we were dealt," he said.

If "I had known of all of Mr. Giuliani's dealings or of his associations with individuals now under criminal indictment, I would not have acquiesced to his participation," Sondland said. "Still, given what we knew at the time, what we were asked to do did not appear to be wrong."

Sondland testified that after a meeting in Warsaw, he discussed with Vice President Pence his worries that the White House was linking military aid to Ukraine opening investigations. Pence's office denied such a discussion occurred.

In brief remarks before departing the White House on Wednesday, Trump re-enacted the conversation he had with Sondland in which he said there was no quid pro quo, adding that Sondland was "not a man I know well. He seems like a nice guy though."

Republicans also reiterated their arguments that, despite Sondland's assertion, there was no quid pro quo because no investigation of the Bidens was initiated, the two presidents met at the United Nations in September, and the U.S. military assistance was eventually released.

Rep. Jim Jordan, R-Ohio, told Sondland that "they get the call, they get the meeting, they get the money. It's not two plus two, it's 0 for 3," referring to Sondland's previous testimony that he added up two plus two to conclude Trump was holding up the military aid in exchange for the investigations.

Sondland previously told House investigators that he delivered a key message to a Ukrainian official this year: Trump would not unfreeze more than $390 million in assistance for Ukraine unless Ukraine made a public statement committing to investigations Trump believed might help him in the 2020 election.

That revelation was included in a three-page addendum filed this month to the first deposition Sondland gave in the earlier, closed-door chapter in the Ukraine affair.

Initially the ambassador didn't discuss that episode, which took place Sept. 1 in Warsaw, Poland. But the testimony of others, Sondland said, "refreshed" his recollection and, accordingly, he amended his testimony.

The encounter in Poland is one of a number of episodes in the Ukraine affair in which Sondland was a central figure.

Another was a July 10 meeting at the White House at which a Ukrainian delegation pressed for a meeting between Zelenskiy and Trump. Then-national security adviser John Bolton was cool to the idea, witnesses have said. He declined to commit. But, according to others, Sondland said that he already had an agreement with acting White House chief of staff Mick Mulvaney for a meeting with Trump — if the Ukrainians agreed to investigations.

Bolton and the national security professionals within the White House staff objected not only to having been boxed out of the shadow channel to Ukraine but also to the merits of Trump's strategy.

Sondland also is one of the actors in the drama who can speak directly about what he heard from Trump.

Witnesses have said that Sondland talked frequently with Trump by phone — even though that went outside the normal policy process — and the ambassador even dialed up the president on his mobile phone from a restaurant table this summer in Kyiv.

Sondland was following up after the previous day's phone call between Trump and Zelenskiy. Another witness has told House investigators that he overheard Trump ask Sondland about the investigations he wanted.

Zelenskiy would conduct them, Sondland said, according to foreign service officer David Holmes, who was at the table across from Sondland. Holmes, who is posted to U.S. Embassy in Kyiv, is scheduled to appear at Thursday's impeachment hearing.

Cooper, in her opening statement, said she became aware of the hold on the military assistance in July. She said she heard in a series of meetings that Trump had directed the OMB to hold the funds "because of his concerns about corruption in Ukraine." She acknowledged, however, that she did not hear of this directly from the president.

Cooper testified Wednesday evening along with Hale, undersecretary of state for political affairs at the State Department.

Hale said Wednesday that he learned the funds were being held during a July 26 meeting.

"We were told in that meeting by the OMB representative that they were objecting to proceeding with the assistance because the president had so directed through his acting chief of staff," Hale said.

He previously said he had been beyond the periphery of many of the events in the story. For example, he said he was surprised to read the White House's account of the July 25 phone call in which Trump asked Zelenskiy for a "favor."

"It did surprise me," Hale said. "I didn't know any of that was happening."

A previous version of this story said Laura Cooper testified that the Ukrainian Embassy asked about the hold on military assistance on July 25. In reference to emails on that day, Cooper said the question was about the aid itself.