Accessibility links
'Beautiful Day In The Neighborhood' Director Captures The Magic Of Mister Rogers "He wasn't afraid of any of the hardest parts of childhood," Marielle Heller says. Her film A Beautiful Day in the Neighborhood centers on Rogers' unlikely friendship with a cynical journalist. 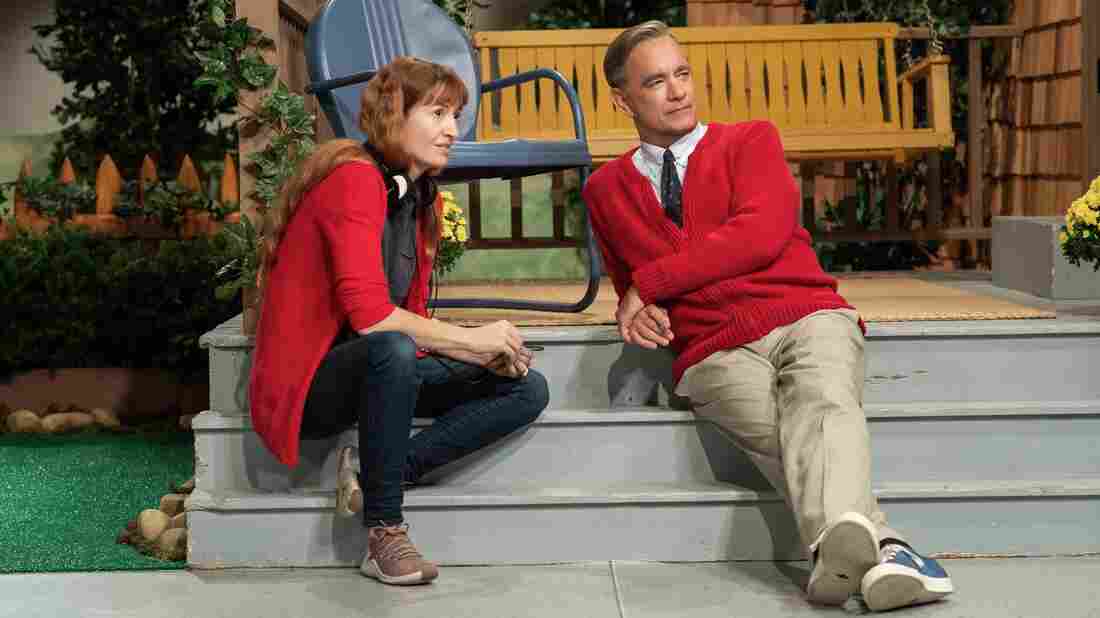 "The way the public feels about Tom Hanks has a similar quality to how we feel about Mister Rogers," says director Marielle Heller. But she found that Hanks and Rogers had a very different energy. At the beginning, she tried to "rein Tom's natural buoyancy back and settle him into a kind of zenlike state." Lacey Terrell/Sony Pictures hide caption 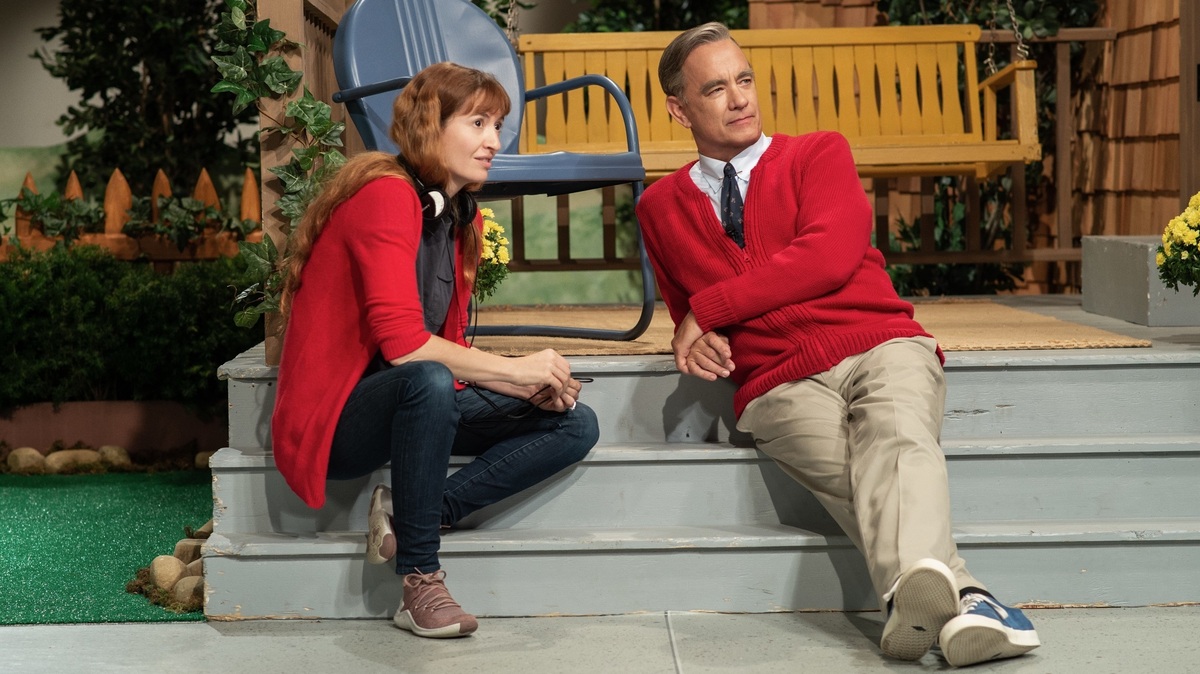 "The way the public feels about Tom Hanks has a similar quality to how we feel about Mister Rogers," says director Marielle Heller. But she found that Hanks and Rogers had a very different energy. At the beginning, she tried to "rein Tom's natural buoyancy back and settle him into a kind of zenlike state."

Director Marielle Heller remembers tuning into Mister Rogers' Neighborhood as a kid, but it wasn't until she was an adult watching the show with her 3-year-old son that she fully appreciated the host's gentle, direct manner. Watching an episode in which Mister Rogers finds that a pet fish has died, Heller was struck by the way he addressed the audience.

"He wasn't afraid of any of the hardest parts of childhood or talking about the most uncomfortable things," she says. It's "a radical notion, but he tells kids the truth."

Heller's new film, A Beautiful Day in the Neighborhood, was inspired by the true story of Rogers' relationship with journalist Tom Junod, who was assigned to profile Fred Rogers in 1998 for a special issue of Esquire on American Heroes. Junod had acquired a reputation for saying the unsayable in his profiles and for his cynicism. The two men — one known for kindness; the other for his skepticism — formed an unlikely friendship.

Heller is adamant that her film, which stars Tom Hanks and Matthew Rhys, is not a biopic; rather, it's a study in how Rogers, who died in 2003, interacted with and impacted the people around him.

"He elicited real, fundamental, catalytic change out of people who he came into contact with," she says. "He had this way of kind of shaking people to their core and breaking them down in some way — and changing them."

On why Rogers' widow, Joanne, told Heller she didn't want him portrayed as a saint

The reason that they want us to know Fred was a person is because then we can all aim to be more like him. And that's what he was hoping for, was that we would all see the ways in which we could choose kindness. We could all see the ways in which we could choose to be more empathetic, and that we could listen to each other more, and we could see that everybody was a child once, and see that everybody has value. And so it was never about exalting him above anybody else or making it that somehow he did things other people couldn't do. The point was that we all could.

The positive thing going into this was obviously the way the public feels about Tom Hanks has a similar quality to how we feel about Mister Rogers. So there was a warmth that we were starting with, there was so much that was already done there, but the truth of the matter is, Tom is a very different person energetically than Mister Rogers. He's very funny. He's very charming. He's actually got a loud booming voice and walks into a room, and you know he's there. He shakes everyone's hand. He cracks jokes. He's boisterous. He's really vibrant, and it's never awkward when you're talking to Tom Hanks. I've never seen him have an awkward conversation with anybody.

And what we figured out in our research about Fred was that he really was comfortable sitting in silence and awkwardness, and he would ask questions to people and he would wait for an answer no matter how long it took, and he wouldn't fill that silence in. And he had a stillness to him, too. So a lot of what I had to do, especially in the beginning, was to kind of rein Tom's natural buoyancy back and settle him into a kind of zenlike state where he was being hyperpresent in every moment.

On finding the right pacing for the movie

Fred had a very specific cadence. I don't think anybody could've watched his show and not noticed that he spoke at a different pace than the rest of the world. And we heard from a number of people that when you would be with Fred, it felt like time would slow down. He kind of controlled time, in a way.

Part of the casting of Matthew Rhys was I wanted to cast somebody who had a different pace. It was about these two men who were sort of foils to each other coming together and having these sort of emotional duels. So Matthew, he is somebody who moves very quickly. His mind is always racing, and he's got a lot of energy pulsing through his body, so the idea was, in our rehearsals and also in the way that we shot these scenes, between these two men, it was about really kind of controlling time.

When there were pauses, they were carefully crafted. I had to kind of force them to pause even longer than they were comfortable pausing. But it was also about what was happening in those pauses. What are the emotional back-and-forths that are happening? What was just penetrated? What memory is being triggered? What are you thinking about in that moment, and when will you respond, and how carefully will you respond?

On watching the Mister Rogers episode about death with her son

We were having a snow day, and so he was home from school. But it was a day that I kind of set aside that I was going to watch a lot of episodes of Mister Rogers. So I asked Wylie if he wanted to watch some episodes with me. And I let him pick out based on the kind of thumbnails on the Internet. And he picked the fish one because he was very obsessed with underwater stuff, ocean stuff. But I knew just looking at the icon that the fish one, this is the episode about death. And I thought, "Are we going to go here? OK."

So in the episode, Mister Rogers goes to feed the fish and one of the fish is dead. And he tries to revive it and he puts it in some saltwater and he sloshes it around and it kind of limply sloshes around, and he says, "It looks like it's moving, but it's not actually moving." And he buries the fish. And he tells the story about his dog, Mitzi, who died when he was a kid.

How The Science Of Learning Is Catching Up To Mr. Rogers

And I just watched my kid watch this episode, knowing that we hadn't spoken really very much about death, and as Mister Rogers is telling the story about the dog dying, Wylie he looks at me with this kind of skeptical look and goes, "Dogs don't die!" I had this like Mister Rogers in my head and went, "Well, no, dogs do die." And I told, I guess, what's a little bit of a stretch of the truth, but I said, "You know, when they're very old and their bodies are tired, you know, dogs do die and and cats die." And we have two cats. And he looked at me and went, "Cats? Cats die?" And I said, "Yeah." And he said, "But we have great cats!" ...

And I held him and I was crying. And all I could figure out to say was, "I know this hurts. I know this is so painful. I don't know what to say. But this, this really hurts." ... Then later that night, as I was putting him to bed, the dreaded question came, which was, "Well, what about people?" The way he said it was. "People don't get dead, do they?" And then we had our kind of second round of weeping that happened that came out of this episode of Mister Rogers.

I don't think I handled it great, and I still feel sort of guilty for how this all came up. I felt like was it too young for us to kind of go there? But I also felt like I like all had to guide me was Fred telling me, "We let the kids guide these conversations, listen and tell them the truth." And so that's what I tried to do.