Accessibility links
Behind The Scenes Of 'Frozen 2' With Disney's Jennifer Lee Her credits include Frozen, Wreck-It Ralph and Zootopia. Now, Jennifer Lee is the first female chief creative officer of Walt Disney Animation Studios — oh, and she co-directed the Frozen sequel. 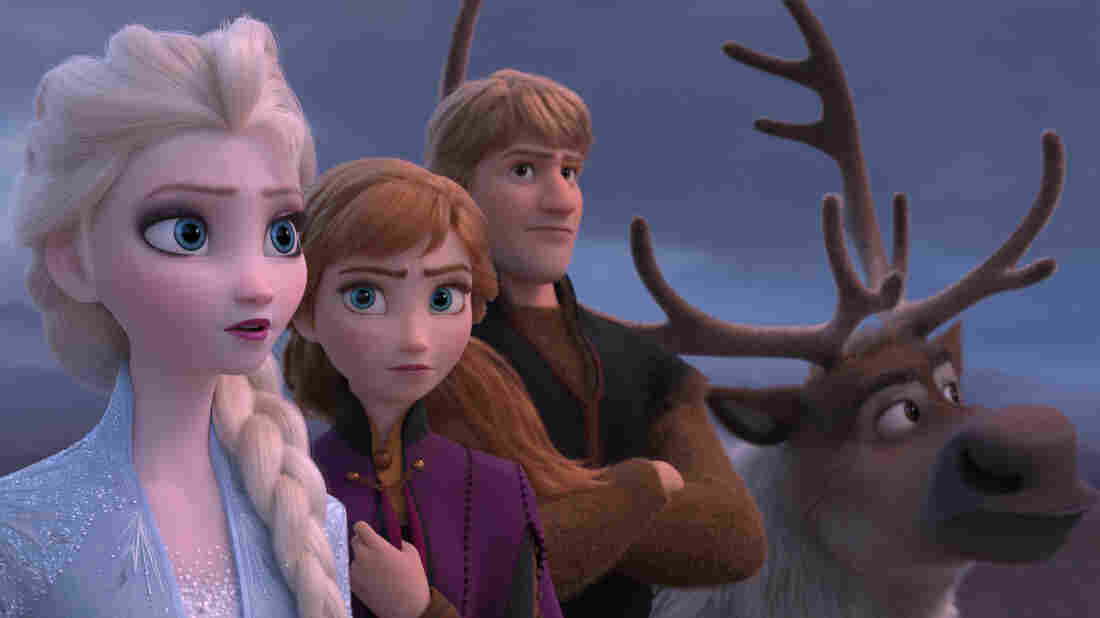 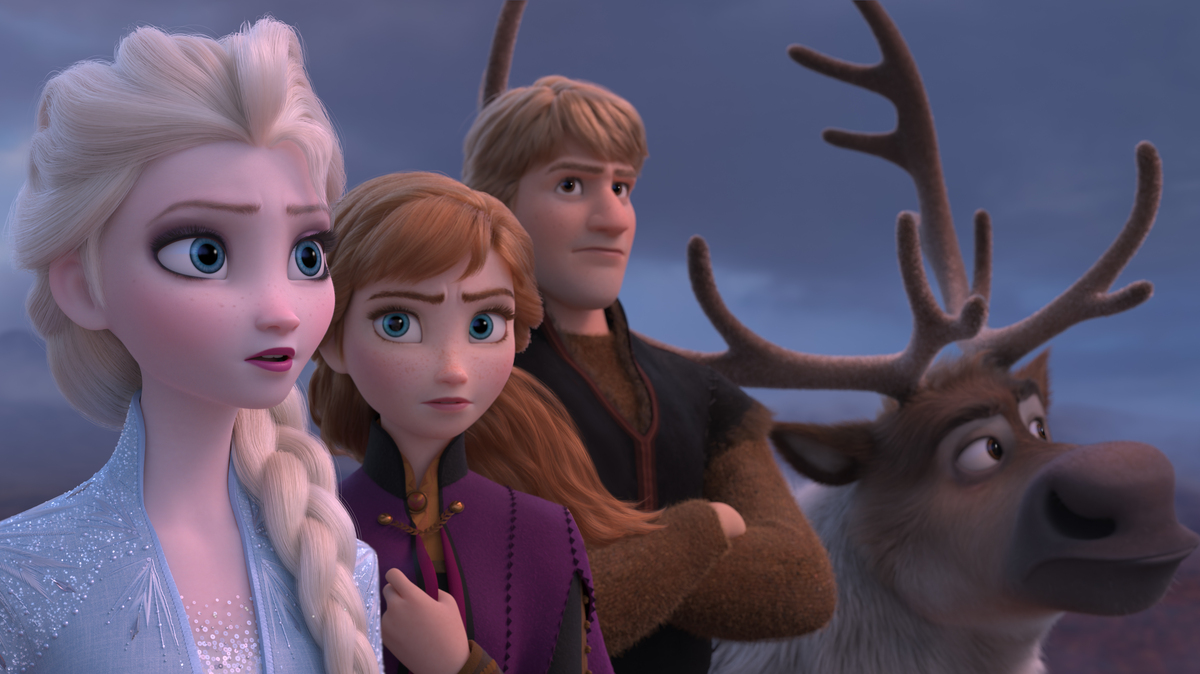 Elsa, Anna, Kristoff and Sven take on a new adventure in Frozen II.

Wind — like water, air, earth and fire — is important to the story in Frozen II. Playful "Gale," as she's called, swooshes around an enchanted forest carrying with her a flurry of leaves that fly around to flute-like sounds. Angry Gale is loud and gusty and, at times, sounds almost like a "backwards inhale," Lee says approvingly.

As Benitez plays different sounds, Buck and Lee talk about the importance of this anthropomorphic wind. When she's angry, Buck says "she blasts that tree limb away from Anna." When Gale interacts with Elsa, who has the power to make ice and snow, they need a sound that implies Gale is saying "You're the magic," Lee says.

Getting the sound effects for this short scene just right is a team effort, as is every other aspect of an animated Disney movie. "You go shot by shot, moment by moment, frame by frame, and discuss everything from the emotion to the effects to the camera," Lee says.

Lots of make-believe Elsas and Annas are about to finally get their wishes when Frozen II hits theaters this weekend. The first Frozen melted young hearts around the world when it was released in 2013 — up until this year, it was the highest-grossing animated film worldwide. (The 2019 remake of The Lion King now holds the top spot.)

Also remarkable: Jennifer Lee co-directed and wrote the screenplays for both Frozen and Frozen II. She has since been named the chief creative officer of Walt Disney Animation Studios — the first woman to hold such a position. 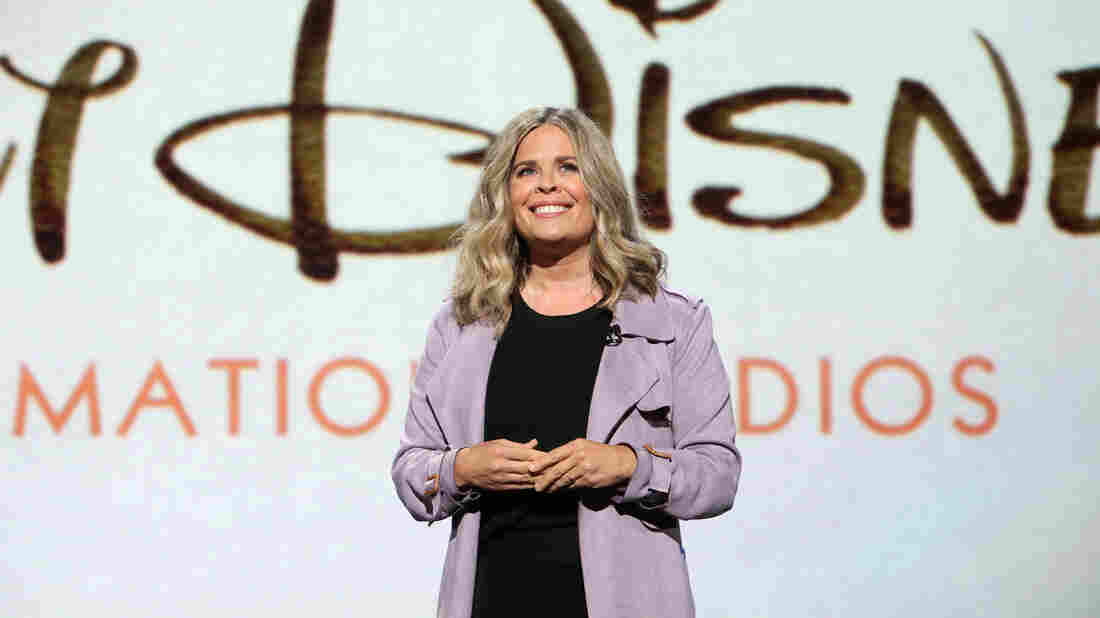 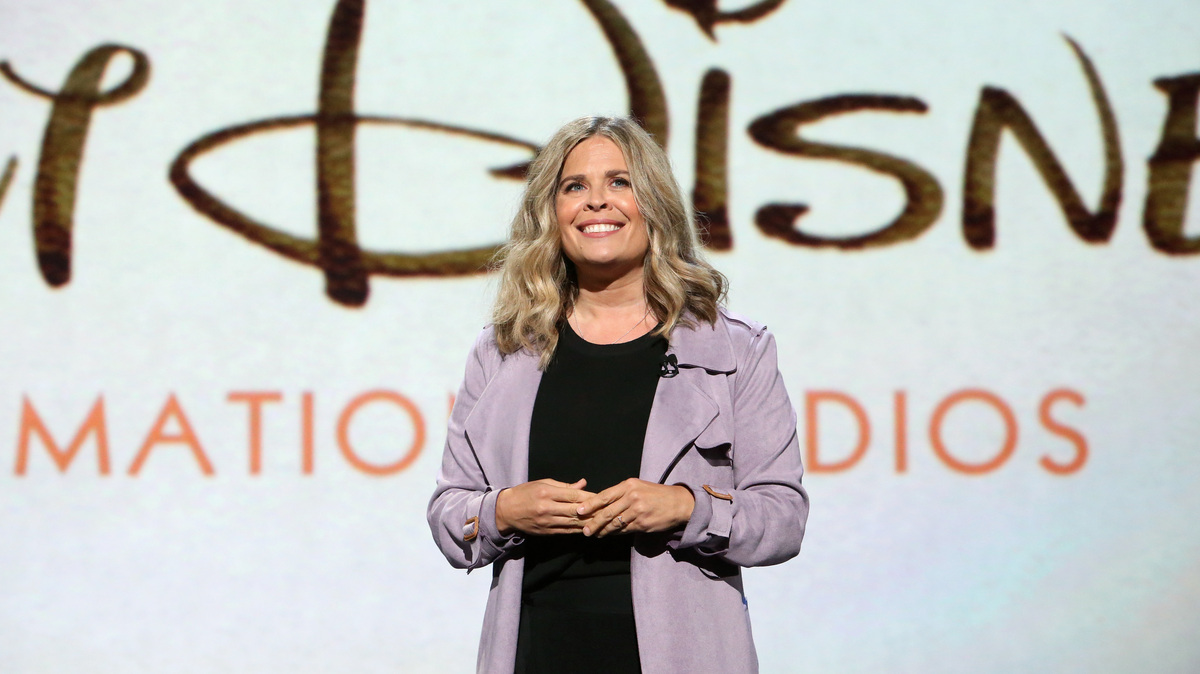 Jennifer Lee was named chief creative officer of Walt Disney Animation Studios following the departure of John Lasseter from the company. She is also the screenwriter and co-director of Frozen II.

In search of the secret siren

The first Frozen was inspired by Hans Christian Andersen's 1845 fairy tale "The Snow Queen." For inspiration for the new movie — and to get into the heads of their Nordic characters — Lee and a team from Disney traveled to Norway, Finland and Iceland.

"When we stood on a glacier for the first time, it really hit us: 'What would Elsa feel standing here?' " Lee says. They wondered: How would the natural world respond in Frozen's magical kingdom?

"It's a glacier," Lee says. "It's a thousand feet deep. It's a thousand years old. It's of nature completely. And something [Elsa] would probably be so connected to. And we realized sort of the mythic realm of her power. And that opened up the story to be something even bigger for us."

This being a musical fairy tale, that "something" begins as a "secret siren" that calls to Elsa in "Into the Unknown," a song that requires the full gusto of Idina Menzel's voice.

The sisters Elsa and Anna are older now. Elsa is no longer ashamed of her unusual ability to crystallize the world around her. But she does wonder "why her?" in Frozen II.

Her quest to find out is what thrusts all of the characters, including scene-stealer Olaf the snowman, into a high adventure. Elsa decides to go in search of the secret siren on her own. She tells her sister Anna she can't come along because she doesn't have "powers" to protect her.

Anna reminds her of what happened in the last movie: "I climbed the North Mountain, survived a frozen heart and saved you from my ex-boyfriend, and did it all without powers. So, you know, I'm coming." And she does.

Storytelling is serious business at Disney. Teams of writers and directors not only work on their own movies, but also lend a fresh set of eyes and ears to the movies being made by other teams.

This kind of peer-review process is not for everyone, says Clark Spencer, president of Disney Animation. "Not all writers really want to be in a room with a lot of people talking about ideas," Spencer says. "They sometimes want to be in their own room just writing by themselves."

But Spencer says that was not the case with Lee, who first came to Disney in 2011 as a freelance writer. Spencer says she dove right in.

"She just accepted that the story team is in there trying to help build this story," he says. "You've got to keep that vision but listen to the ideas and figure out what is really behind those ideas. 'How is that going to help propel the character forward?' and 'Where do I push back and where do I actually listen and figure out how I'm going to alter where I see the story at this point in time?'" Lee's immediate embrace of Disney Animation's collaborative process "made the entire studio just fall in love with her," Spencer says.

Lee was on the team that made Wreck-It Ralph as well as Zootopia, a socially conscious children's movie about unconscious bias. The Oscar-winning Zootopia became the second Disney Animation movie to cross the $1 billion mark at the global box office.

The first was Frozen — which won two Oscars (animated feature and original song, for "Let It Go" by Kristen Anderson-Lopez and Robert Lopez). Jennifer Lee walked the red carpet with her sister.

Frozen spawned a cottage industry of other products: A best-selling soundtrack, a Broadway show, a ridiculous amount of merchandise, fan videos, and children performing the songs in talent shows around the world. During production, Jennifer Lee says she tried not to think too much about Frozen's intense global fandom.

"If you think about it, it's overwhelming. You almost can't process it," she says.

Lee has had a lot "to process" these past few years. She watched someone she respected, John Lasseter, get forced out of Disney over allegations of sexual misconduct. Lee says Lasseter was instrumental in putting her on Frozen after he saw how well she connected to the team developing the movie.

"As a woman, the kind of princess I always felt we needed, in terms of the strength and the messiness and the quirkiness, the lack of grace some of us have ... that resonated," Lee says. "And [Lasseter] saw that and brought me into that team."

Lasseter's legacy at Disney is complicated. There had been rumors of his alleged misconduct, but he was also considered a visionary.

"It's an adjustment," Lee says. "It's all overwhelming at times. But we have all these films that needed to move forward. And what we all did — which became a model for me — is: we got together ... as directors and as producers and said 'What do we see for the studio?' 'What are the things we need to do going forward?' 'What would we like to do?'

When Lee was named Disney Animation's new creative officer, Walt Disney Studios Chairman Alan Horn said that with Frozen, she brought a "new and exciting perspective" to the company.

Lee grew up in Rhode Island. She thinks some of her mental toughness comes from being raised by a single mom, a nurse who worked three jobs. Lee remembers being bullied and taking comfort in stories. One of her favorites was Cinderella.

"I think the biggest thing for me was her being mistreated so much, but being able to say 'it's not you, it's them' and hold on to her strength," Lee says.

In her new role overseeing teams of Disney Animation writers and directors, Lee says she wants to push both storytelling and the art form of animation forward. What will not change, she says, is the role of fairy tales in children's lives.

"We're going to take you a little bit into scary places ... and notions of things that you are uncomfortable with to help you cope in real life," Lee says. "But we're always going to bring you back to a safe place."