Accessibility links
Review: Big Questions About Small Animals In 'Mary Toft; Or, The Rabbit Queen' Dexter Palmer's new novel is based on the strange true story of a woman who confounded the medical and scientific establishments of 18th century England by claiming she'd given birth to rabbits. 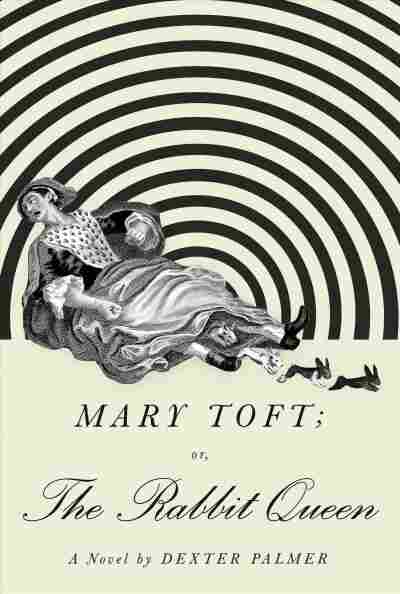 Dexter Palmer's last novel, Version Control, radically rewrote the literary possibility of the time-travel tale. But in his new book, Mary Toft; or, the Rabbit Queen, Palmer practices time travel of a different sort. The story transports the reader to 18th century England, where it brilliantly fictionalizes the real-life case of a disturbing medical wonder that dumbfounded laymen and doctors alike who witnessed it: In 1726, a farmer's wife named Mary Toft, from the village of Godalming, began inexplicably giving birth to corpses of rabbits.

The case of Mary Toft is firmly installed in the history books, and it was widely commented on and satirized during and after its time. But Palmer takes great creative license in his expansion and retelling of the legend. Moreover, he takes a daring narrative leap: He tells the story not from Mary's perspective, but from the point of view of Zachary Walsh, a 14-year-old apprentice to the real-life figure of John Howard, a local surgeon in Godalming who helped discover Mary Toft and bring her to prominence. Torn between the worldviews of his de facto father — the scientifically minded Dr. Howard — and his real father, a man of God, Zachary navigates the increasing fame and furor surrounding Toft — whose grotesque miracles begin to attract the attention of the medical and scientific establishments in nearby London.

From there, Palmer's impeccable research kicks in. The author works in various historical facts and personages, including King George I's royal surgeon Nathaniel St. André and noted physician Cyriacus Ahlers. But where there are gaps or fuzzy areas in the actual history of Mary Toft, Palmer fills in the illustration with lush detail, vivid characterization — and most importantly, philosophy. The story, of course, is set during a period of vast upheavals in the way the Western world thought of reality and humanity, and the gradual unfolding of Toft's visceral, unnatural rabbit-births begin to challenge the very fundaments of belief in 18th century England.

Palmer has always been a novelist of big ideas, and 'Mary Toft' is his most thoughtful work yet.

Palmer has always been a novelist of big ideas, and Mary Toft is his most thoughtful work yet. Against a richly rendered backdrop of the Enlightenment, the novel embodies the conflict between faith and rationality. Is Mary Toft a fraud or a freak of nature? Does her unholy maternity signal something sinister, or is this simply a hitherto unseen possibility of biology? At one point, the famed obstetrician Sir Richard Manningham, a skeptic of Toft's strange ability, debates at length whether her rabbit fetuses — if indeed conceived within her womb — possess souls. Caught up in these heady arguments is a more pragmatic concern that foretells the imminent rise of mass media: How and when can public opinion be effectively manipulated in this age of contested authority between God and science, and to what end?

Epistemology is a big pill to swallow in a work of historical fiction, but Palmer coats it with sure storytelling, a compelling voice in the form of Zachary, and a gripping mystery at the core of the story. And with the world still battling over many of the same issues of knowledge and faith today, the book rings uncannily relevant. "Which of us does not have a devil that lives inside of us, whispering not what is true, but what we wish to believe, out of innocence or cupidity or a hundred other reasons?" St. André asks after the truth has come to light and all the players involved are left to pick up the pieces of their shattered perceptions. Mary Toft not only delivers such questions with brains and nerve, it breathes into them dramatic life.