Accessibility links
A Diplomat With A History Of Voicing Concerns Set To Testify In Impeachment Inquiry David Holmes is a top staffer at the U.S Embassy in Ukraine. He overheard a phone call between the U.S. ambassador to the European Union and the president in which "investigations" were discussed.

Listen · 4:33 4:33
A Diplomat With A History Of Voicing Concerns Set To Testify In Impeachment Inquiry 4:33 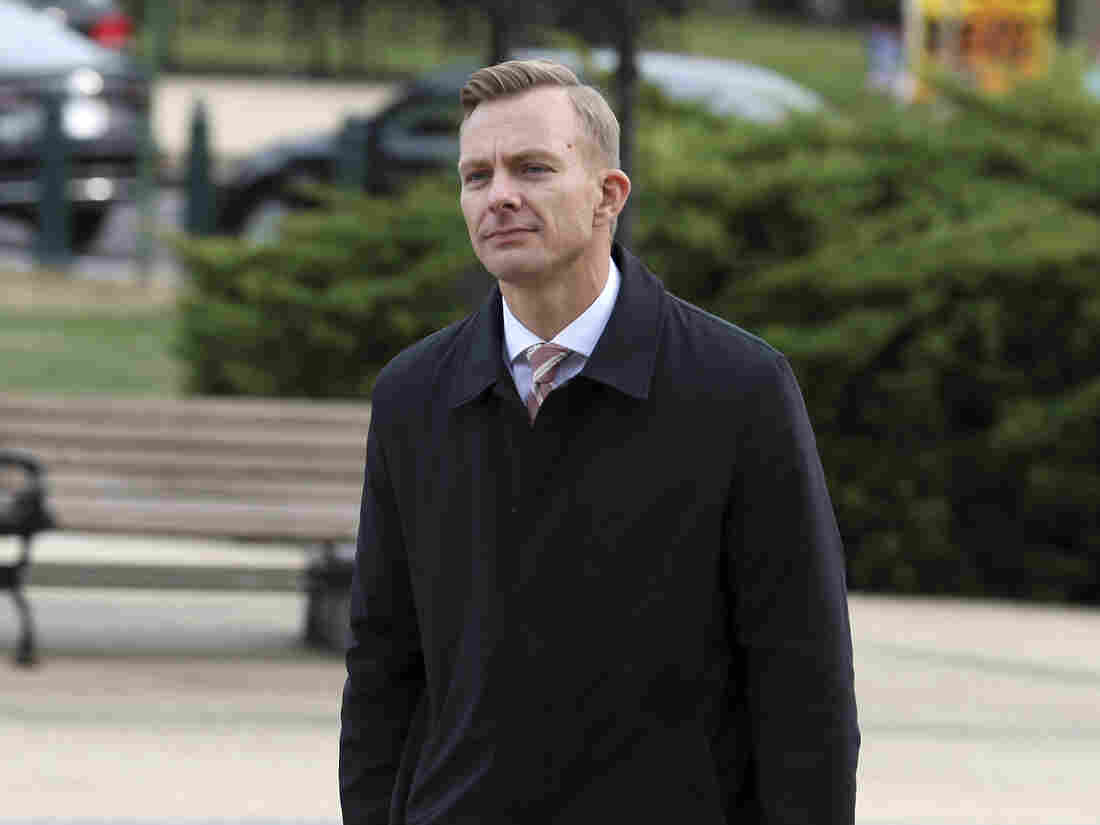 David Holmes, a career diplomat and the political counselor at the U.S. Embassy in Kyiv, Ukraine, is scheduled to give public testimony as part of the impeachment inquiry into President Trump on Thursday. Jose Luis Magana/AP hide caption 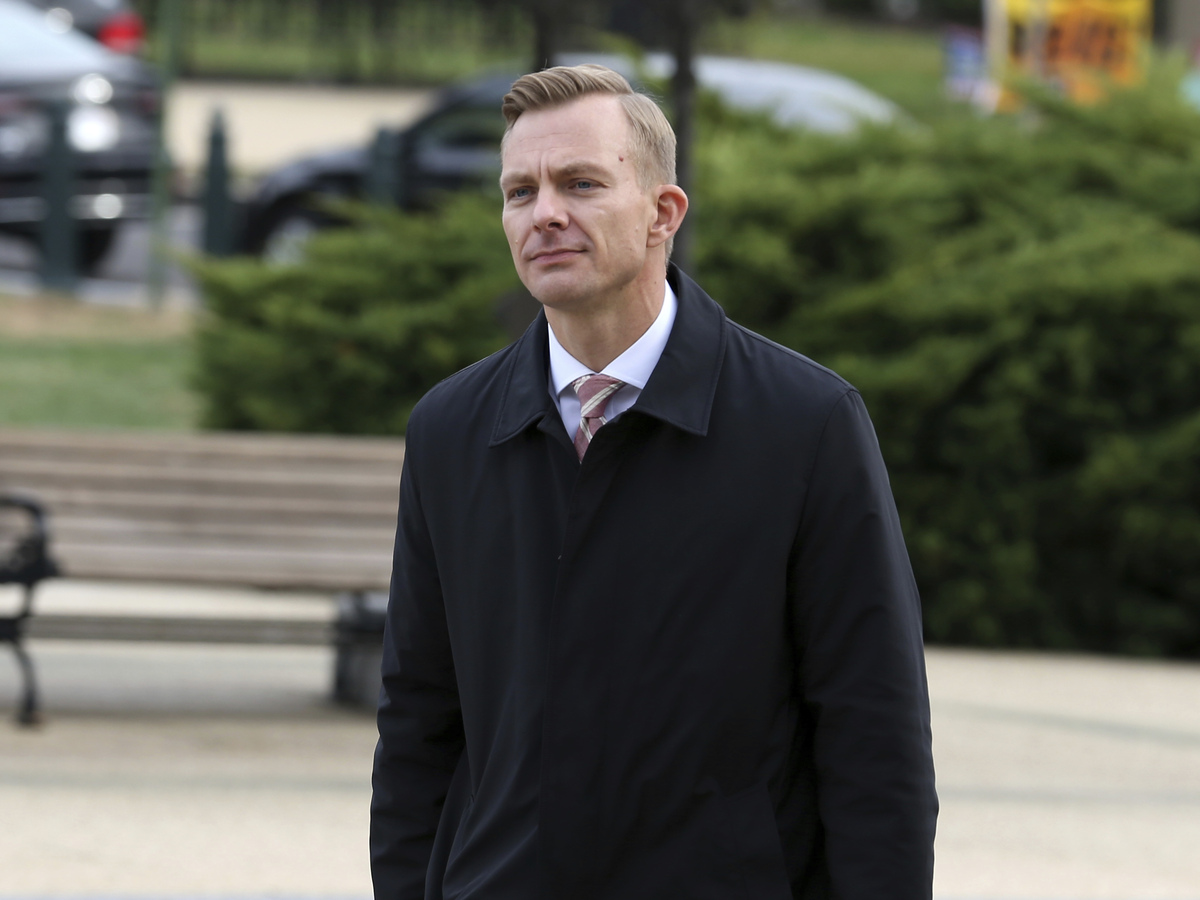 David Holmes, a career diplomat and the political counselor at the U.S. Embassy in Kyiv, Ukraine, is scheduled to give public testimony as part of the impeachment inquiry into President Trump on Thursday.

A career diplomat who overheard a U.S. ambassador's phone chat with President Trump this summer in which Trump allegedly referred to "investigations" to be carried out by Ukrainian officials is set to testify in the Democratic-led impeachment inquiry Thursday.

David Holmes, a senior staffer at the U.S. Embassy in Ukraine, is expected to expound on testimony he gave to lawmakers last week behind closed doors.

Holmes, according to transcripts released Monday by House committees investigating the Ukraine affair, said he heard Trump ask Gordon Sondland, the U.S. ambassador to the European Union, "So he's going to do the investigation?"

According to the transcript, Sondland, who testified before the House Intelligence Committee on Wednesday and is a White House point-person on Ukraine, said yes.

"He's going to do it," Sondland said, referring to Volodymyr Zelenskiy, the new Ukrainian president. According to Holmes, Sondland also told Trump that Zelenskiy "loves your ass" and will "do anything you ask him to."

Holmes was with Sondland and two other staffers at a restaurant in Kyiv when the ambassador used his cellphone to call Trump on July 26.

That's the day after Trump spoke with Zelenskiy in that now-infamous phone call — where Trump asked his Ukrainian counterpart for "a favor," according to a rough transcript made public by the White House in September.

Holmes is one of the few witnesses in the impeachment inquiry to hear Trump in his own words on the Ukraine affair.

He could add evidence to the assertion that Trump engaged in a quid pro quo with the Ukrainians by putting a freeze on roughly $400 million in military aid and a promise of an Oval Office meeting in exchange for investigations that could be beneficial to Trump's reelection campaign. 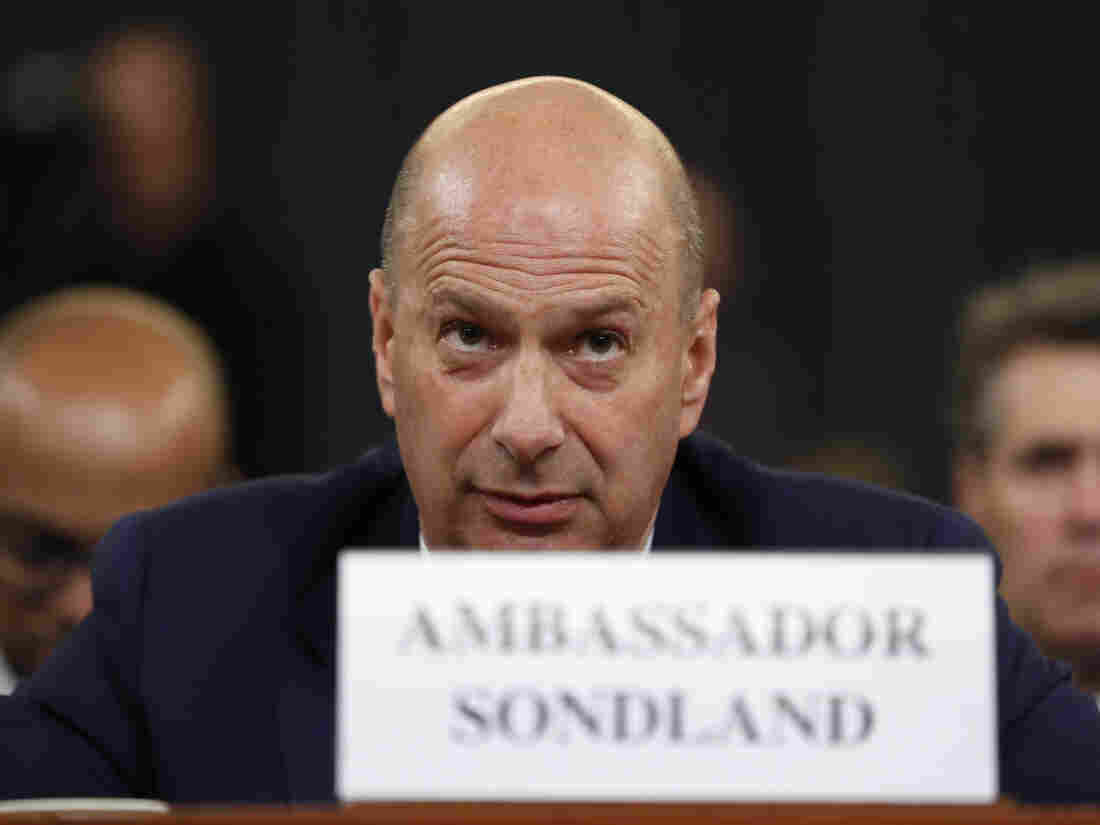 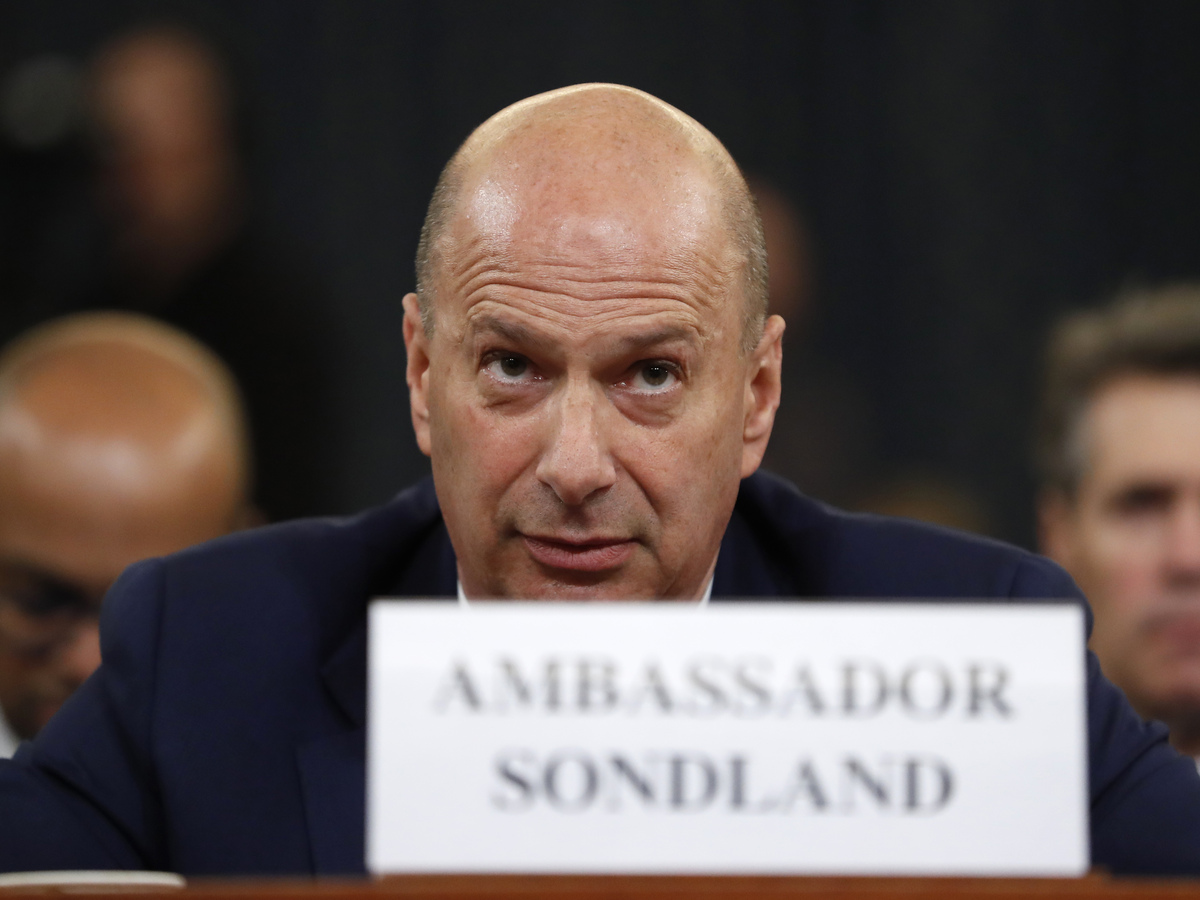 But Trump never dictated explicit details of the alleged quid pro quo, according to the public testimony given by Sondland on Wednesday.

As NPR's Phil Ewing notes, Republican counsel Steve Castor asked Sondland, "Did the president ever tell you personally about any preconditions for anything?"

Expect Holmes to be pressed by lawmakers about an exchange he and Sondland had at the Kyiv restaurant once the phone conversation with Trump ended.

Holmes recalls the ambassador saying that Trump cares about "big stuff" that is beneficial to the president, like the "Biden investigation."

During the public hearing, Sondland said the only part of Holmes' testimony he takes exception to is that he himself never mentioned the Bidens by name.

He added that he didn't know at the time that the investigation into "Burisma" — the Ukrainian energy company on whose board former Vice President Joe Biden's son, Hunter, served for a time — was, in effect, code for the Biden family.

A history of taking a stand on issues

David Holmes joined the foreign service in 2002. He has served in a number of posts including in Kosovo, Kabul, New Delhi and Moscow, before his current post as counselor for political affairs at the U.S. Embassy in Ukraine.

I worked with David Holmes in Moscow. He had the well-deserved reputation as a rising star in the State Department.

In a tweet, former U.S. Ambassador to Russia Michael McFaul said he had worked with Holmes, who "had the well-deserved reputation as a rising star in the State Department."

In 2014, Holmes won a "constructive dissent" award raising concerns about how the Obama administration was carrying out Afghanistan and Pakistan policy. Using the classified dissent channel, Holmes sent a formal message where he explained that the system at the time was cumbersome and that it "hindered our diplomatic effectiveness."

"His message was so good and so influential that it went all the way to the secretary of state," said Eric Rubin, an active duty foreign service officer and president of the American Foreign Service Association.

The William R. Rivkin award goes to midlevel officials at the State Department who shine a light on policy issues they observe.

Rubin, who also received the award in 1994, made clear it is not about whistleblowers, but rather recognizing someone who feels strongly enough to put themselves on record for voicing views on policy that may differ from the administration.

He said the memo Holmes crafted ultimately became "the subject of senior interagency meetings to discuss how to reorganize our approach to Afghanistan and Pakistan."

In an interview last week on All Things Considered, Dan Feldman, a former State Department official who worked with Holmes in Afghanistan and Pakistan, said Holmes represented "the best of the rising generation of foreign service officers."

"Many of the things that would signal that, he got even after he filed the dissent cable," Feldman said.