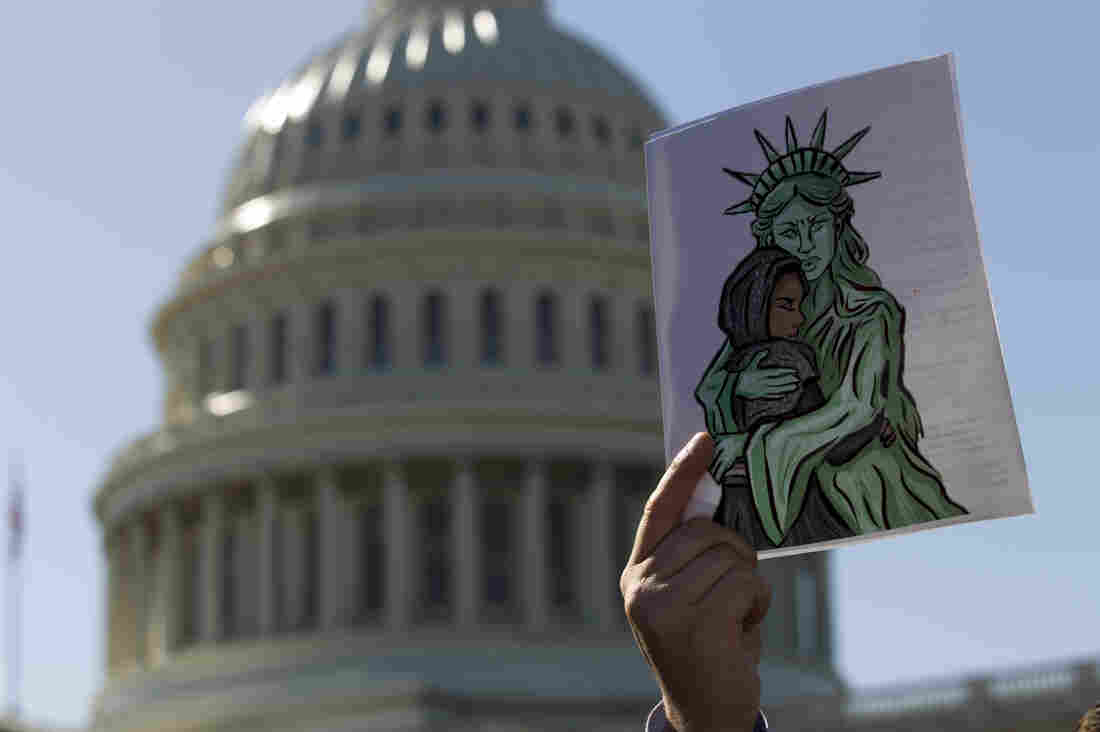 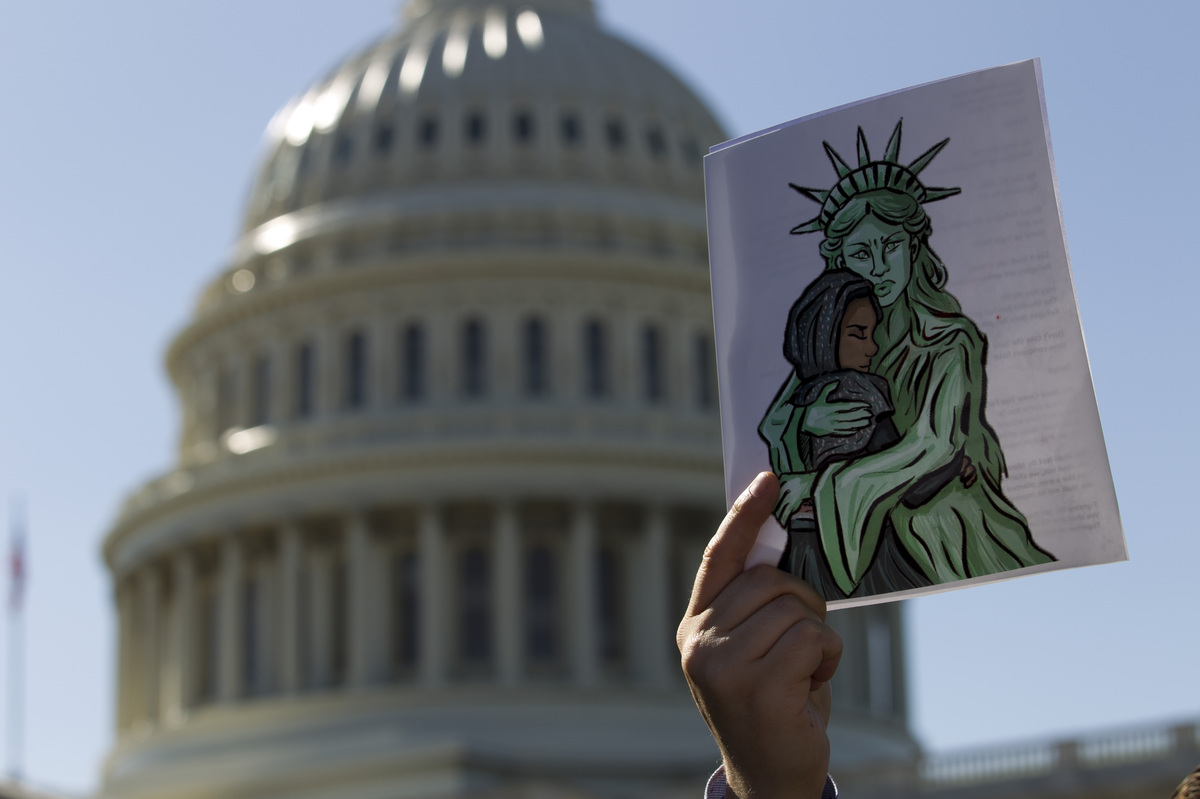 Faith leaders and members of human rights groups protest outside of the U.S. Capitol during a demonstration calling on Congress not to end refugee resettlement programs on Oct. 15, 2019, in Washington. Trump officials announced in September that it would allow localities to opt out of accepting refugees.

A Trump administration plan to give state and local authorities the power to reject refugees from being resettled in their communities is headed for court.

Three organizations that help refugees find places to live when they first arrive in the United States filed a lawsuit Thursday challenging the executive order on refugee resettlement that President Trump issued in September.

"It's cruel and shortsighted," said Krish O'Mara Vignarajah, CEO of Lutheran Immigration and Refugee Service, one of the agencies suing to block the order. "Refugees that have been waiting to be reunited with their families for years may be forced to settle hundreds of miles away," she said.

When the U.S. accepts refugees, the federal government works with nonprofit agencies and local authorities to resettle them. The executive order adds a new requirement: that those agencies get written consent from all localities and states in which they plan to place refugees.

The opponents argue in their complaint that the order violates federal law.

Congress gave states and local authorities "a voice but not a veto" in deciding where refugees should go, said Melissa Keaney, a lawyer with the International Refugee Assistance Project, which is representing the resettlement agencies. HIAS and Church World Service are also plaintiffs in the lawsuit, which was filed in federal court in Maryland.

Once refugees are settled in the U.S., they're free to move anywhere in the country they want. Immigrant advocates say this executive order won't change that.

The advocates argue that resettlement agencies in states and localities that reject refugees would be deprived of federal funding that helps them provide essential services for refugees.

"This is not about enhancing state and local involvement," said Mark Hetfield, the CEO of HIAS. "This is about getting states and localities to drop out of the program, and to do away with the infrastructure," Hetfield said.

The Trump administration has been scaling back the U.S. refugee program for years. It recently slashed the annual cap to 18,000 per year, the lowest total since the Refugee Act of 1980.

Now, in giving states and towns a bigger say in the process, the White House is giving some communities what they have long sought.

President Trump touted the executive order at a rally last month in Minneapolis.

"You should be able to decide what is best for your own cities and for your own neighborhoods," Trump said. "And that's what you have the right to do right now. And believe me, no other president would be doing that."

So far, no states have officially said they will block refugee resettlement. But immigrant advocates are worried that several will. In 2015, more than two dozen states asked for a moratorium on the resettlement of Syrian refugees. And a handful of states have filed lawsuits seeking to block Syrian refugees, including Texas, Alabama and Indiana.

In Tennessee, state lawmakers have been fighting in federal court for years to block refugee resettlement there. State Rep. Terri Lynn Weaver is one of those lawmakers.

"I am not against refugees coming to the United States," said Weaver, noting that her own father was a refugee who came to Ohio from Yugoslavia. "My family came in that same scenario. I just don't think it should be something that the taxpayers should be funding."

The federal government pays for most benefits the refugees get, though states are on the hook for some Medicaid costs and public education. Weaver says refugees cost the state of Tennessee "millions" of dollars per year, but declined to give an exact figure.

Refugee advocates dispute that. They say most refugees are self-sufficient within months. And they point to a study by the U.S. Department of Health and Human Services that was never released by the Trump administration. It found that refugees brought in $63 billion more in government revenue than they cost over the past decade.

Weaver says her own father didn't get any public benefits when he arrived.

"They came here and embraced our values, our principles and the way we do things in this country," Weaver said. And she questioned whether today's refugees are assimilating into U.S. life the way her father did.

"I'm not going to say all of them, but there's a large number of them we're concerned with that they don't like our values, like our principles. And I don't know about you, but I want to preserve what made us a great country to begin with," Weaver said.

Tennessee's lawsuit was dismissed by a federal district judge. But Weaver says the plaintiffs will appeal all the way to the Supreme Court.

If refugees can't come to Tennessee and other states, advocates worry they'll be stuck even longer in crowded refugee camps around the world.

Muna Muday knows the agony of waiting in a refugee camp.

"What refugees go through in the camps is unimaginable," Muday said. "It's an experience no one can even describe."

Muday's family fled the civil war in Somalia.They were set to leave the camp in Kenya and fly to America. Then the Sept. 11 attacks happened, and refugee resettlement in the U.S. was temporarily suspended.

"It was just a devastating moment of our life," she said.

Muday's family did eventually make it to the U.S., arriving in Nashville in 2004. Today she's studying for her master's degree in public health at Vanderbilt University. But she's worried about other refugee families — who may be stuck, just like hers.

"Right now it feels like a similar experience of what is happening now under the Trump administration," Muday said. "It's very sad to see that someone who's the leader of our nation do this to people who really need the help."