Accessibility links
For Pence, Impeachment Inquiry Will Test A Political Path Shaped By Faith As Vice President Pence's role in the Ukraine story comes under increased scrutiny, how might his biography inform how he navigates the crisis in the White House? 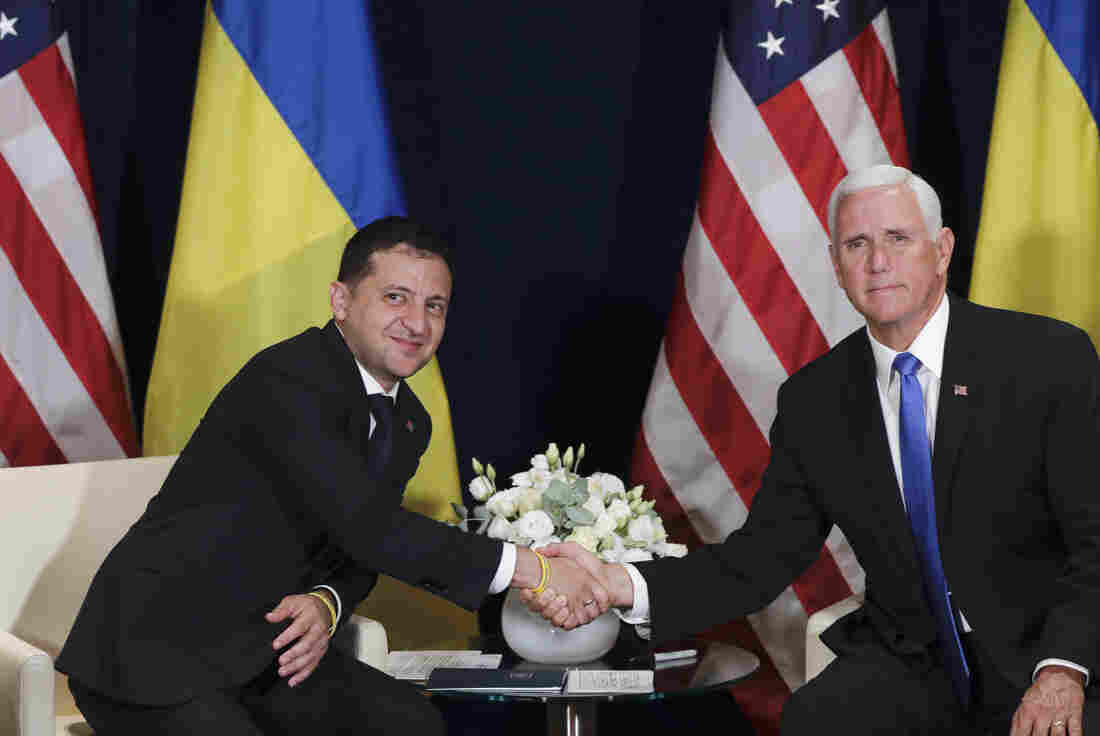 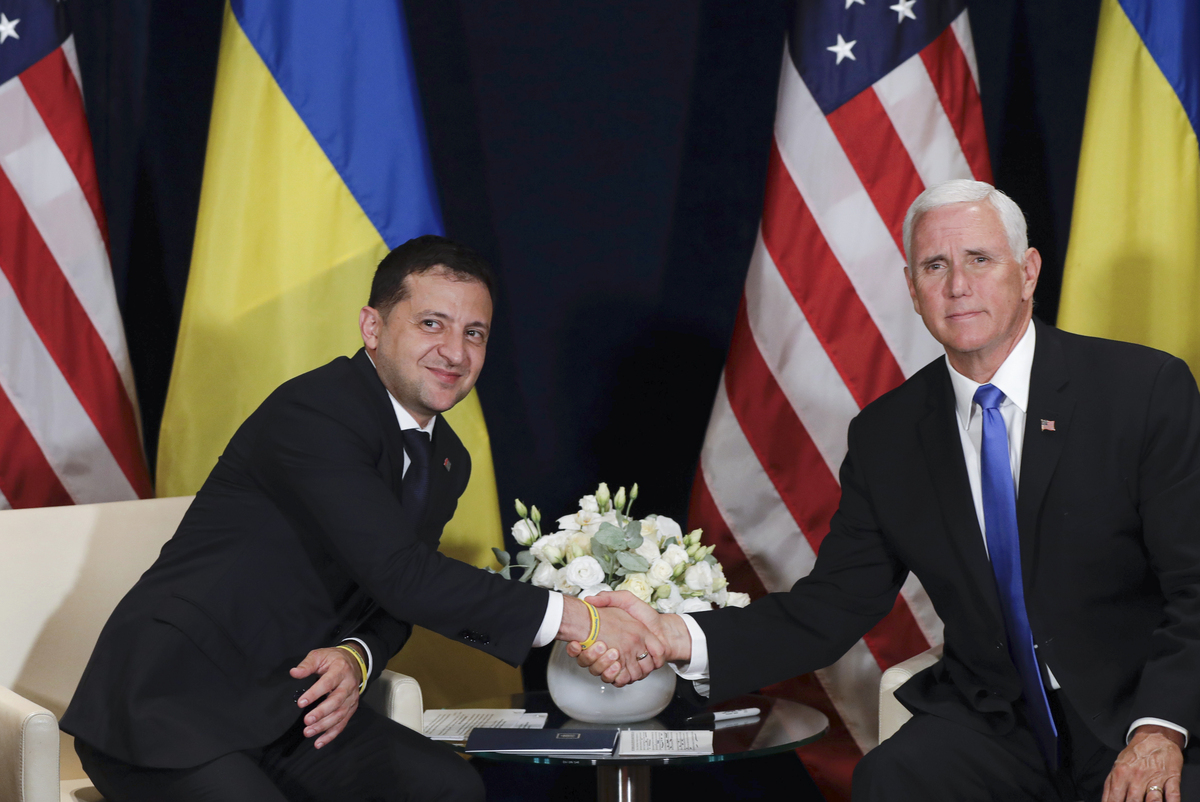 Until Ambassador Gordon Sondland's public testimony on Wednesday, Vice President Pence had managed to keep out of the center of the impeachment inquiry.

For the first time during the public phase of the impeachment hearings, a witness connected Pence to a possible quid pro quo. Sondland said that just ahead of a Sept. 1 meeting with Ukrainian President Volodymyr Zelenskiy, he conferred with Pence about a link between U.S. military aid for Ukraine and the investigation that President Trump sought into former Vice President Joe Biden and his son Hunter.

"I mentioned to Vice President Pence before the meetings with the Ukrainians that I had concerns that the delay in aid had become tied to the issue of investigations," Sondland testified.

"I made no comments in my meeting with President Zelenskiy concerning any investigations or tying investigations to U.S. aid to Ukraine, and I have no recollection of any discussion with Ambassador Sondland before that meeting," Pence said.

With his role in the Ukraine story under increased scrutiny, Pence finds himself ensnared in a scandal that threatens to end with just the third-ever impeachment in U.S. history. For those who know and have studied Pence, his path through the crisis is likely to feature the mix of religion and politics that he learned to synthesize decades ago.

To understand Pence, it's instructive to read his 1980 Hanover College senior thesis, says journalist Tom LoBianco, author of Piety & Power: Mike Pence and the Taking of the White House.

"It's all about Abraham Lincoln's ambivalence toward organized religion, his own agnosticism and how that played to his own political peril in his career," LoBianco said. "And I'm reading this and I'm like, this isn't about Abe Lincoln. This is about Mike Pence. You can see him reasoning through the political calculus with the faith calculus."

Even at 21 years old, Pence understood how politics and religion work together.

Pence grew up in a conservative Catholic family sort of going through the motions of his faith, but in 1978 he went to a Christian music festival in Kentucky. It was a turning point for Pence — the moment, he says, when he found Jesus.

His political career, however, was less linear. He ran for Congress twice — in 1988 and 1990 — and lost both times. Then he decided to try his hand at something else: a daily talk radio show.

LoBianco said the radio show was about more than just getting Pence's name out there.

"I think people take the wrong lesson from that when they say that, 'Oh, he built his name I.D. That's what you need to win.' I think you're missing the bigger point, which is: This is where he gets his antenna from," he said.

His political antenna pointed him to the kinds of cultural and social issues that revved up a religious audience. It helped Pence start to find his political niche.

A purpose and a calling

Pence won a congressional seat in 2000 — a seat he held until 2013, when he became the governor of Indiana. LoBianco said it wasn't a good fit.

"He didn't like being governor. As a manager, he was not good at it. And this is where he got himself into trouble in that time," he said. "He was detached. He spent too much time fundraising for his own long-term presidential goals and not enough time being in the job and living the role of governor."

Which is why, LoBianco said, the battle over a controversial religious liberty law in Indiana caught Pence off guard. The so-called Religious Freedom Restoration Act was popular among social conservatives, but it led some national companies to boycott the state in 2015 over concerns that it discriminated against the LGBTQ community.

The controversy left the governor stunned, according to Jim Atterholt, Pence's former chief of staff. After the law was amended, Atterholt said, Pence met directly with members of the LGBTQ community. 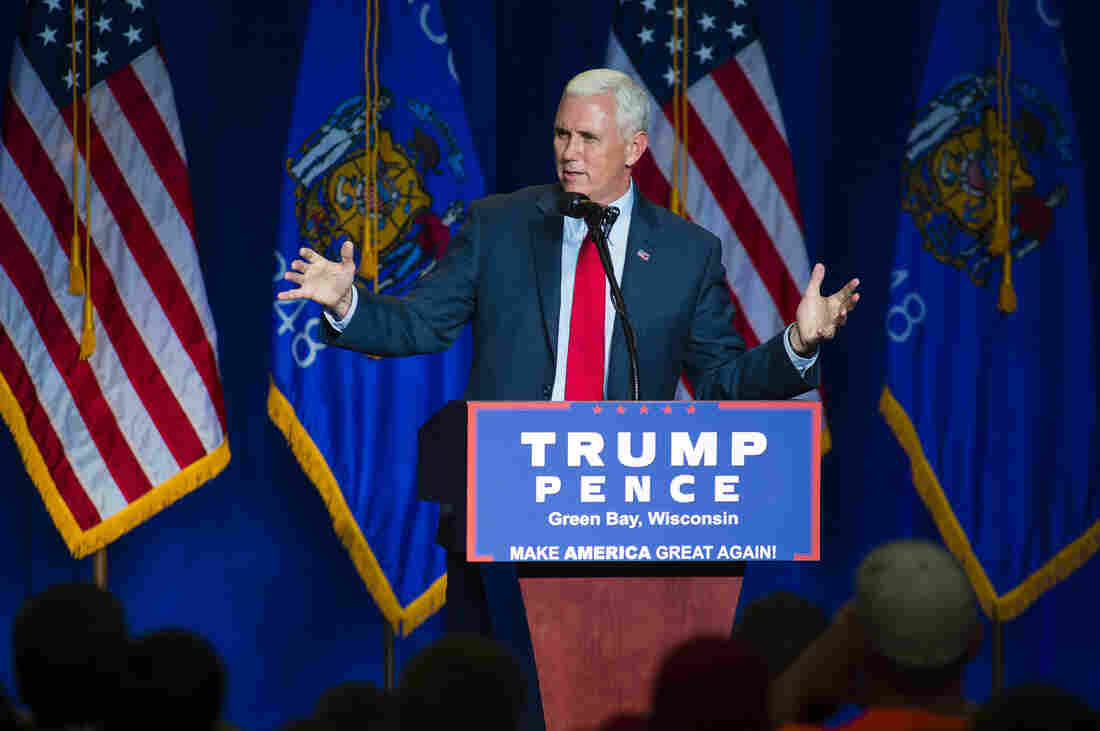 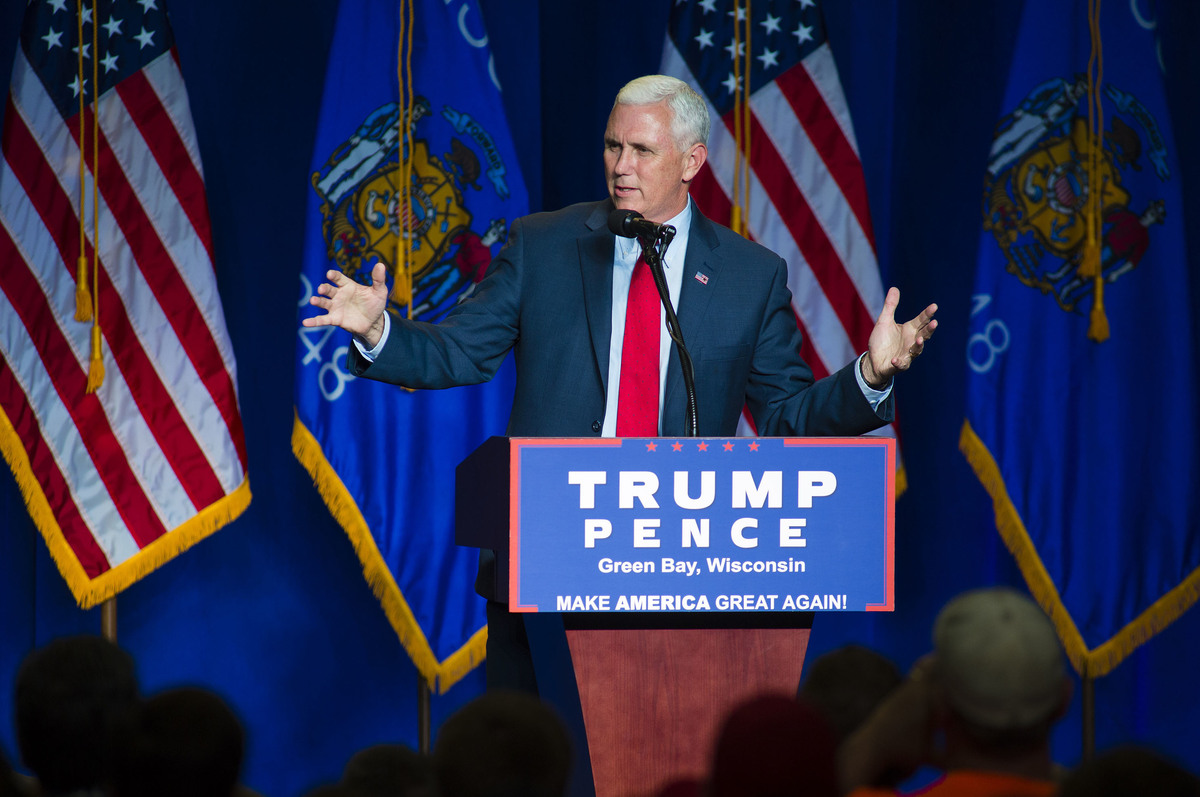 Mike Pence greets the crowd before introducing Donald Trump at a campaign rally in 2016 in Green Bay, Wis.

"He began to meet and establish relationships with folks that just weren't regularly in our office and maybe they should have been more regular in our office," Atterholt said.

But through all that dialogue, Pence never wavered on core issues that are often used as a litmus test in conservative circles. He still believes that marriage should happen only between a man and a woman and that abortion is wrong.

It's a style that stands in stark contrast to Trump.

"His purpose as vice president is to be a partner and to provide godly counsel, to be prayerful and to give him the best counsel he can and to also be ready, God forbid, if something were to happen," said Atterholt. "He is a very loyal person and he understands that everyone's flawed in different ways. And he's very forgiving of those flaws."

In 2016, with Trump locked in a tight race for the White House with Hillary Clinton, Pence was even able to forgive Trump for the now infamous Access Hollywood tape where Trump bragged about groping and kissing women.

"Was he pleased about that? Of course not. But at the same time, he's a very loyal person and he wasn't going anywhere," Atterholt said. "I mean, he'd made a pledge. He'd made a promise and he was going to keep that promise."

Atterholt said it made sense when Pence joined the Trump ticket.

"Then-Gov. Mike Pence and currently Vice President Pence sees public service as a calling, and when that invitation came for him to be considered, he prayed about it and he thought about it, talked to a lot of people, but really in his heart, he said whatever happens, happens," Atterholt said. "If that's how I'm to be used, if that's how I can best help our country, I'm willing to do that."

"Plans to give you hope and a future"

A couple of months after the inauguration, Pence appeared on stage with David Hughes, the lead pastor of Church by the Glades, an evangelical megachurch in South Florida. Without mentioning Trump by name, Hughes made it clear that some of Pence's most loyal supporters were still coming to grips with the vicious GOP primary and Pence's new partnership with the president.

"I thought you did a brilliant job having respectful discourse with people who politically had different points of views," Hughes said. "How would you guide us? How can the church help bring unity to a country where convictions are so polarized?"

Pence didn't miss a beat. "It's just the greatest privilege of my life to be vice president to President Donald Trump," he said.

Pence knows why he was put on the ticket and how important moments like his appearance at Church by the Glades are to keeping the evangelical vote in Trump's column.

"What the president really personifies is I think the pathway forward here. He's got broad shoulders, but he's got a big heart," he said. "I tell people sometimes he's bigger than life, you know? Always memorable, charismatic. And then there's me. You know, it's like I guess he wanted to balance the ticket."

Then, he walked through the door that had been opened in this conversation, and separated himself from Trump.

"For me, for my house, it all really does come down to just wanting to treat others the way you want to be treated," he said. 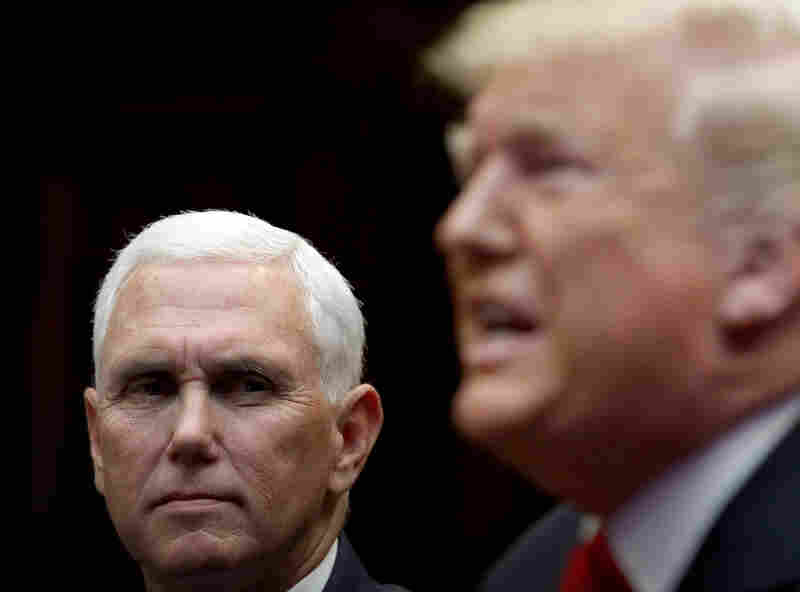 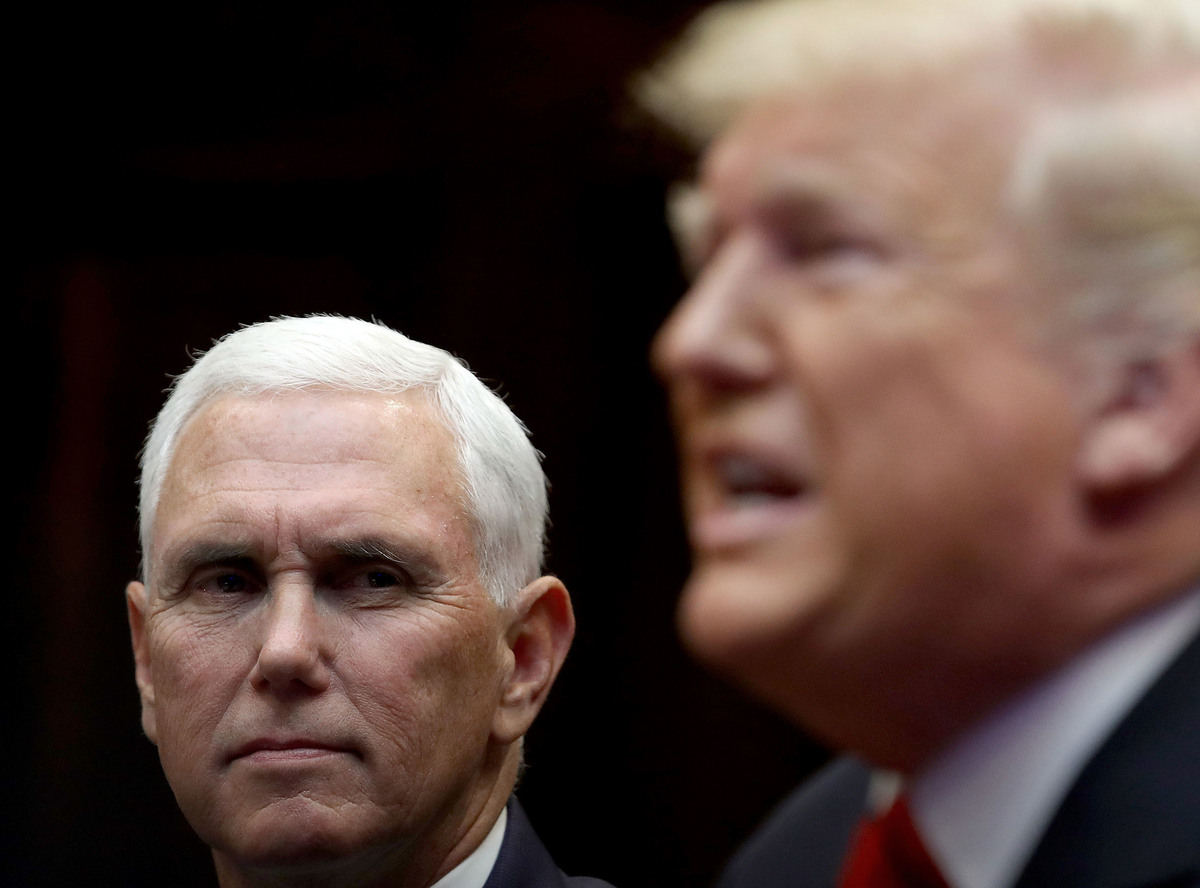 Vice President Pence and President Trump listen during a conference call with the International Space Station on Oct. 18.

It's a small reminder that yes, he has been called to serve and he will. But he is not Donald J. Trump. He is Michael Richard Pence, a man with his own ambitions. And if he can move past the impeachment inquiry, if he can defend the president but keep his distance, he could find his own path to the White House.

Pence keeps a Bible verse above the mantel in his home. Jeremiah 29:11: "For I know the plans I have for you, plans to prosper you and not to harm you, plans to give you hope and a future."

But as the impeachment inquiry draws Pence further inside, the calling for Pence now — the work — is to survive the present.

This story was produced for broadcast by Catherine Whelan and edited by Shannon Rhoades. Heidi Glenn adapted it for the Web.