Accessibility links
Book Review: In 'Crime In Progress,' Fusion GPS Chiefs Tell The Inside Story Of The Steele Dossier Glenn Simpson and Peter Fritsch reveal the hows and whys of the whirlwind they uncorked by commissioning Christopher Steele to investigate Donald Trump's activities in Russia.

In 'Crime In Progress,' Fusion GPS Chiefs Tell The Inside Story Of The Steele Dossier

In 'Crime In Progress,' Fusion GPS Chiefs Tell The Inside Story Of The Steele Dossier 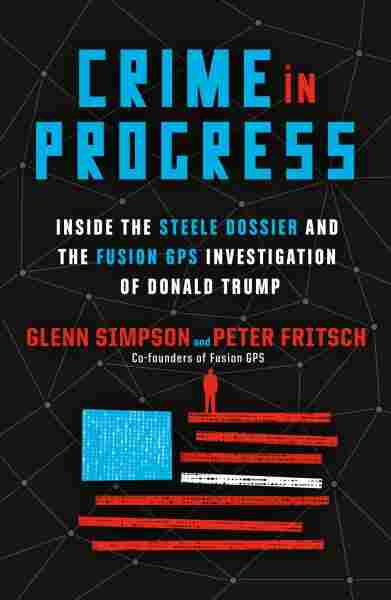 by Glenn Simpson and Peter Fritsch

There's an unverified story that has circulated placing Donald Trump in the presidential suite of the Moscow Ritz-Carlton in 2013.

NPR has not detailed it because it remains unverified. Trump and his supporters have called it outrageous and ridiculous.

So where did it come from?

Simpson and Fritsch, former Wall Street Journal journalists, are the founders of the now-famous or notorious private intelligence firm Fusion GPS. They hired Steele to investigate Trump and said they, too, were surprised about what came back.

Their book steps through that and other tumult that resulted when the Fusion bosses decided to break with what they called their normal practice to eschew political jobs and excavate what they believed would be a lucrative vein: a man they call a "faux billionaire scam artist."

That work and their story is now familiar from headlines and congressional hearings, so one of their most interesting topics is Steele — the man who, for a time, seemed to be everywhere but whom nobody knew.

Steele spent his career working for the U.K.'s foreign intelligence service, MI6, and assembled a network of contacts in Russia that he preserved after getting into the private intelligence game in 2009, the authors write.

Those contacts told the Ritz-Carlton story and much else after Simpson and Fritsch commissioned Steele to find out what he could about Russia and Trump, then a political upstart who threatened — and later destroyed — the GOP establishment in the primaries.

Other Republicans wanted to stop Trump. Initially, a conservative billionaire bankrolled the work of Simpson's and Fritsch's company.

When Trump dominated the Republican primaries and the GOP establishment began to accept him, Simpson and Fritsch made a pitch to Democrats, who took over the account. During that phase of the work, they reached out to Steele, a contact they had made years earlier.

So who really is Steele — this faceless man who unleashed a vortex of mishegoss and mangled American politics?

Per Simpson and Fritsch, he is a level-headed striver who made his own way through Cambridge — even though he "didn't come from money" — and thence through MI6 and the heartbreaking loss of his first wife.

Steele, the authors stress, is not just a pro but a good bloke. Simpson and Fritsch describe covering drinks for the group in Washington and then Steele reciprocating in London at the pub.

"After a beer or two — but never three — Steele would drop talk of how to gin up business and reveal a genuinely deep and warm laugh while speaking of his nature walks and a budding interest in bird-watching," they write.

Translation: He is a good egg, per Simpson and Fritsch, and certainly not a scurrilous maker-up of falsehoods from whole cloth.

How then, to explain glaring questions about the Russia reporting? The Ritz-Carlton story wasn't the only problematic allegation.

There was also the story about Trump's then-attorney Michael Cohen allegedly taking part in a direct relationship with Russian agents as part of the 2016 election interference — an allegation that Cohen denied vociferously and which also has never been verified.

Well, sources report what they know or what they've heard, Simpson and Fritsch argue, but that doesn't mean it's always right.

What about the allegation, sourced to Steele by The New Yorker, that Steele's contacts said Russia's intelligence agencies vetoed the prospect that Trump might nominate Mitt Romney as secretary of state?

That extraordinary nugget reportedly came in after the expiration of Steele's contract with Fusion — and that could be why it appears to have been left unexplored in Crime in Progress.

But it's an instructive example.

This either would amount to shocking evidence about unprecedented control over U.S. life seized by a foreign power — which somehow could run a clandestine channel to Trump in order to communicate its will ... or ... it could be more evidence that someone, somewhere in this game of telephone might not be on the level.

So, separate from the Romney allegation, what about the prospect that Russian intelligence might have deliberately fed disinformation through people it knew had contacts with an adversary, in Steele? His official cover was blown years ago.

No, Steele told Simpson — Russian influence-mongers worked all along to help Trump. They wouldn't do that, Steele argues, by undermining him with outrageous stories such as the Ritz-Carlton anecdote: "The ultimate Russian goal was to prevent Hillary Clinton from becoming president, and therefore, the idea that they would intentionally spread embarrassing information about Trump — true or not — is not logical."

Steele has told associates, the authors write, that he believes "at least 70 percent of the assertions in the dossier are accurate. On that he hasn't wavered."

For example, Russia really did intervene in 2016 to help Trump against Hillary Clinton. Trump's then-adviser Carter Page really did travel to Moscow in 2016 and make contacts there that even Justice Department special counsel Robert Mueller couldn't fully establish in his report.

Page really had been in contact with Russian intelligence officers and was on the FBI's radar. He maintains that he has done nothing wrong and, indeed, hasn't faced criminal charges.

Why did that happen?

It was Steele, the authors write, who felt compelled to go outside the arrangement he had with Fusion GPS and transmit what he had learned to the FBI.

If it had been up to Simpson and Fritsch, they write, Steele's reporting never would have seen the light of day.

But they and Steele felt so alarmed by what his sources reported that they arranged for it to pass via intermediaries to the authorities — and, eventually, it found its way to news organizations, including NPR, in early 2017.

The explosive effects of its publication are still resonating. Rep. Jim Jordan, R-Ohio, and other Republicans broached it again this week in House impeachment hearings.

"That is exactly what happened in 2016 ... It is sad," he concluded. "It is sad what the country is going through. I wish it would stop, but unfortunately, I don't think it is."

Simpson and Fritsch tell the story in brisk, workmanlike prose.

For readers who've been following the news closely since 2016, their book offers an intriguing step behind the scenes of familiar headlines and fills in gaps about the public understanding of Fusion GPS and the role it has played before and since Trump's election.

People who aren't closely engaged might find Crime in Progress to be tougher sledding as it delivers a rockslide of names, dates, cross-connections and bite-size explainers.

It also is a story without an ending, the authors write, because central questions about Trump — and whether powerful Russians or others may have some hold on him — haven't been resolved, they say.

As for skeptics or Trump supporters? Let's not kid ourselves; this book was not written to bring them in or change their minds.

Critics will find objectionable passages on nearly every page, such as this one:

"Why did Russians keep dangling business deals that never seemed to go anywhere? Why was Felix Sater so close to the Trumps, even traveling to Moscow with Ivanka and Don Jr. in 2006? Maybe Trump did this out of desperation, or maybe it was just a failure to vet his business partners properly. Or, quite possibly, there was a more sinister explanation. Either way, Fusion had the sense that couldn't answer some of the crucial questions surrounding Trumps's conduct through open records alone. It needed a new avenue of inquiry to get a better feel for what was happening within Russia itself ..."

Steele was that avenue, and he swans into and out of the story throughout the book, ready with a quip even when trouble comes looking for him.

The authors describe a campaign by an archenemy, Rep. Devin Nunes, R-Calif., chairman and now-ranking member of the House Intelligence Committee, to target and destroy Fusion. Nunes flies to London to try to get a meeting with the heads of British intelligence to try to undermine Steele.

"But this was amateur hour of the highest order: The agencies flatly refused to meet with him. He did, however, meet with a junior national security official, who very politely told him nothing," according to Steele's sources.

The former MI6 officer was not impressed, per the authors.

"This Nunes is a proper clown," Steele told Fritsch. "It's stunning he thought that would work."