Accessibility links
Beck's 'Hyperspace' Is A Technicolor Breakup Album (With Beats By Pharrell) Fans have come to know two sides of Beck — the moody balladeer and the peppy funk surrealist. His latest is a dizzying hybrid of the two, born from the emotional havoc of a midlife divorce.

Beck's 'Hyperspace' Is A Technicolor Breakup Album (With Beats By Pharrell) 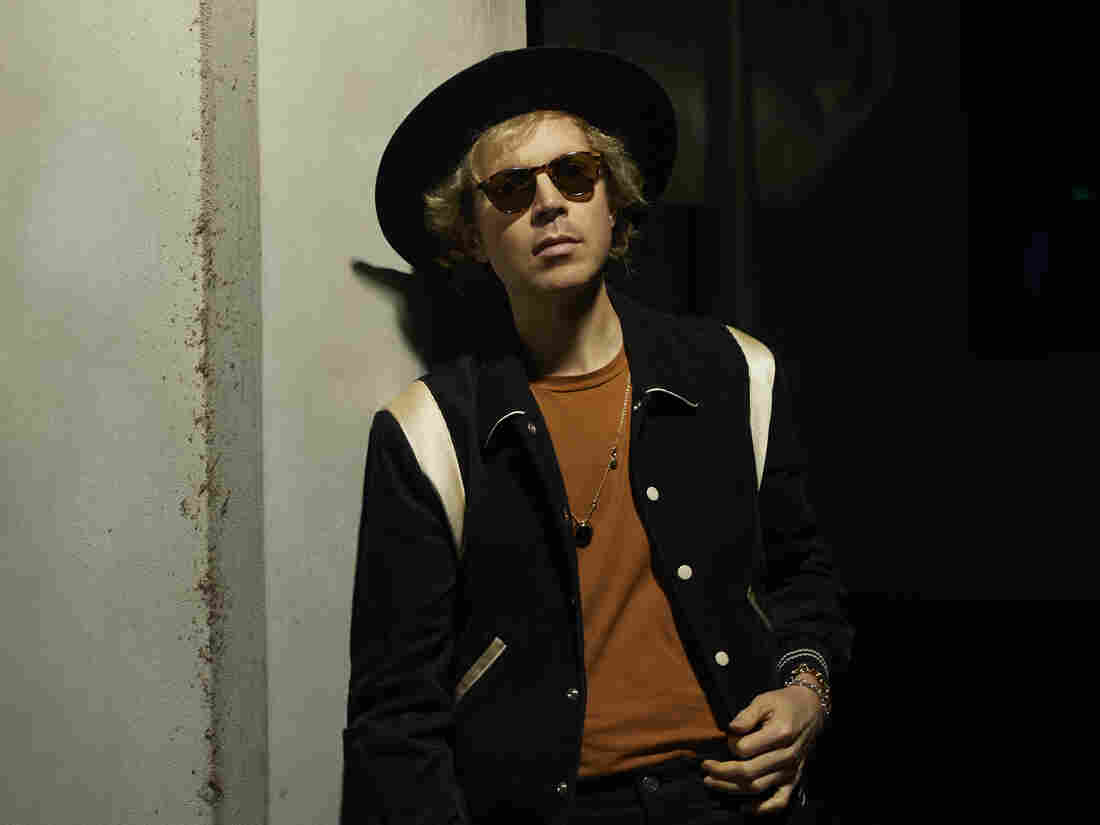 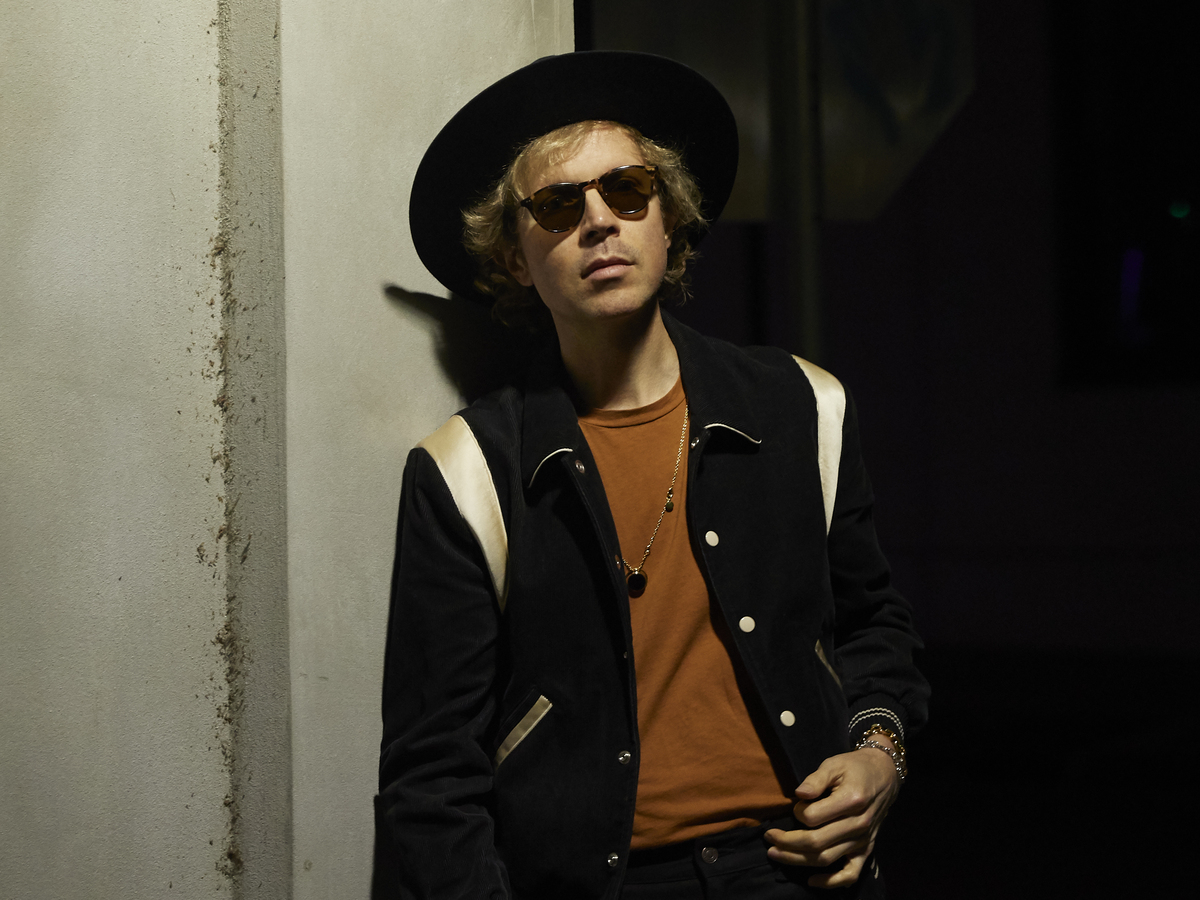 Mikai Karl/Courtesy of the artist

When news broke earlier this year that Beck's marriage of nearly 15 years was ending, it seemed a safe bet that a certain kind of album would follow: not the surreal, up-tempo Beck of Odelay, Midnite Vultures or Guero, but something melancholy and ballad-heavy — like his album of the year winner, Morning Phase, or his 2002 breakup opus, Sea Change. Stylistically, Beck remains a musical chameleon of remarkable range and elasticity. But in the course of 13 albums and a quarter-century, even casual listeners have come to recognize the two main modes in which he works.

Hyperspace, his latest, disrupts the pattern, falling into a nebulous space between the two extremes. It is very much a breakup album, navigating themes as devastating as anything on Sea Change — but it is also a clear collaboration with its co-producer, Pharrell Williams, heavy on low-key funk and bright synthesizer tones. In sound alone, many of the songs aren't far off from the glossy bops of Beck's previous album, Colors, which yielded the late-career crossover hits "Up All Night" and "Dreams." But the often aggressive cheeriness of that album is gone, replaced by a dazed numbness most easily parsed as "Wow, this guy is going through something."

"Uneventful Days," the first proper song following an intro, sets a shell-shocked tone with crisp digital syncopation that strongly evokes Phil Collins' 1985 hit "Take Me Home." But where that song builds to a cathartic chorus in which Collins declares freedom after feeling like a prisoner all his life, Beck lingers in paralyzing uncertainty as the reality of his new normal sets in. He relitigates old conflicts in his head, but doesn't have the energy to try to change his former partner's mind. He aches for a familiar sense of love and security even as his words describe two people becoming strangers to one another: "You might know my name, but you don't know my mind."

The feeling of resignation carries over to "Star," a strangely hesitant R&B number in which he's cautious and deferential as he moves out of their home, and the computerized folk track "Dark Places," where he's reacquainting himself with loneliness while trying to negotiate his way out of it. The lyrics in these songs complement Beck and Pharrell's respective musical instincts, which nudge familiar genre tropes slightly off their predictable patterns and expected tonalities. The result is a mood where all that was once safe and normal to now seems a little bit alien, if not exactly uncomfortable. The grooves are pleasant; the tone of the music is never as dire as the words being sung. It's that strange state of mind where you're acutely aware of your problems, but your brain won't quite let you feel it all.

The more explicitly upsetting songs on Hyperspace are those that veer sharply away from feeling. The mid-tempo ballad "Chemical" approaches the very concepts of love and romance with a cold scientific fatalism: "I'm so high / Love is a chemical / Start it, start it again." Other songs clustered near the record's center read like a coping mechanism set to music, drifting off into cosmic reveries that rationalize all emotion. In particular, the cloudy arrangements of "Stratosphere" and the title track sound like dull, calm places where he's gone to hide.

It isn't all so grim, though. "Saw Lightning," originally released as a single back in April, sounds like the most logical combination of Beck and Pharrell's aesthetics: a jumpy rap-folk hybrid supercharged by Pharrell's drum programming and backing vocals, which zooms up in intensity on the chorus when the bass drops in. There's a frantic but thrilling feeling to the song, like the fight-or-flight instinct triggered when a catastrophe beyond your control lands in your life. Though it matches the rest of the songs in tone, in this case the crisis is external, as Beck reckons with environmental disaster with a steely decisiveness that's far removed from the more complex emotional grappling he's doing elsewhere. (It can be a lot easier to deal with the messes you weren't directly involved in making.)

The odd mix of emotions here, the sense of displacement and confusion, may be the point. Beck made Sea Change in his early 30s, writing with the pure, agonizing clarity of a broken heart. Hyperspace lands in the choppier waters of middle age, after the dissolution of a relationship that began not long after Sea Change, produced two children and lasted what is now a third of his life. It stands to reason that the narrator of these songs never seems quite sure what he's feeling, how he's doing, whether or not he's reacting to life with an appropriate sense of scale.

The record ends with "Everlasting Nothing," a majestic ballad that's among the best songs Beck has ever released. "I woke up in a movie, didn't know if it was my whole life," he sings over a stately guitar rhythm. "When it ended, I laughed before I cried." A verse later, he imagines his rebirth as "a standing ovation for the funeral of the sun," sounding less blunt and plainspoken and more poetic and abstract — that is, more like himself.

As the song progresses it grows grander in scale, and finally peaks with the ecstatic glossolalia of female gospel singers. The effect is similar to "The Great Gig in the Sky," in which Pink Floyd used a similar arrangement trick to convey a cosmic notion of death and the afterlife. But whereas Clare Torry's voice was foregrounded on that song, the gospel vocals in "Everlasting Nothing" are distant in the mix, like a siren call to oblivion that Beck is tuning out for the time being, choosing to stay grounded as he faces the unknown. It's not quite a happy ending, but it's at least a dramatic ride into the sunset, capping all the gloomy resignation with some sense of direction and purpose.

The emotional arc of Hyperspace can be exhausting, especially if it hits close to home. But for fans, it may feel more important that the record has an emotional arc at all. Beck's past few records have featured many excellent songs, but lately it's been hard to shake the feeling that he's grown more interested in engaging with music on formal terms than exploring deeper feelings. On Hyperspace, he's not hiding anything. We happen to know more about his personal life at the moment than usual, but we don't need to in order to connect. Anyone can recognize the sound of someone trying their best to pull themselves together.